The National Nature Reserve of Newborough Warren and Llanddwyn Island are located on the south-western corner of the Isle of Anglesey, North Wales and will always be one of my favourite places on earth. I have written about the island before, but for St Valentine’s Day this is an extract from an existing page about its connection with Wales’ own patron saint of lovers, St. Dwynwen. (St. Dwynwen’s actual feast day is January 25th).

The name Llanddwyn means “The church of St. Dwynwen”. Dwynwen is the Welsh patron saint of lovers, the Welsh equivalent of St. Valentine, and the island is alternatively named ‘Lover’s Island’. 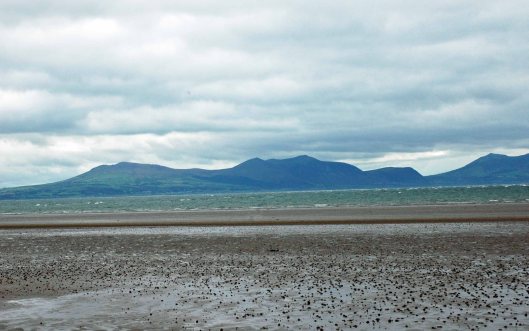 The view across Newborough beach to Snowdonia

The mythology surrounding St. Dwynwen has several slightly varying versions, but the essence of the stories is similar.

Dwynwen lived during the 5th century AD and was one of 24 daughters of St. Brychan, a Welsh prince of Brycheiniog (Brecon). She fell in love with a young man named Maelon, but rejected his advances. This, depending on which story you read, was either because she wished to remain chaste and become a nun or because her father wished her to marry another. She prayed to be released from the unhappy love and dreamed that she was given a potion to do this. However, the potion turned Maelon to ice. She then prayed that she be granted three wishes: firstly that Maelon be revived, secondly that all true lovers find happiness, and last that she should never again wish to be married. She then retreated to the solitude of Llanddwyn Island to follow the life of a hermit.

The plaque in the island’s museum: 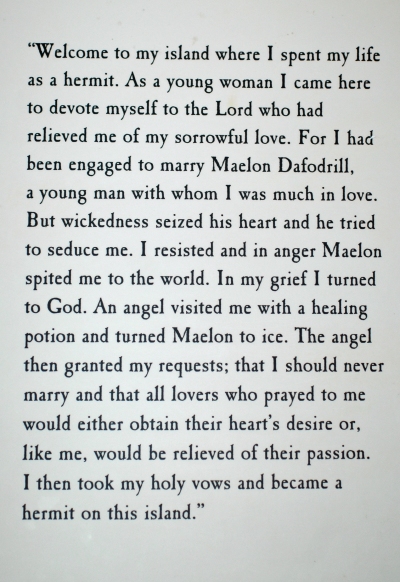 Dwynwen became known as the patron saint of lovers and pilgrimages were made to her holy well on the island. It was said that the faithfulness of a lover could be divined through the movements of some eels that lived in the well. This was done by the woman first scattering breadcrumbs on the surface, then laying her handkerchief on the surface. If the eel disturbed it then her lover would be faithful. 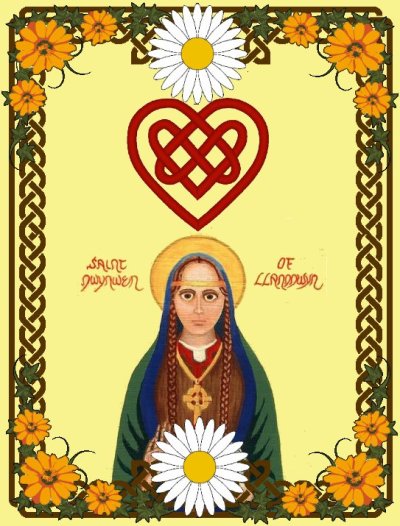 Visitors would leave offerings at her shrine, and so popular was this place of pilgrimage that it became the richest in the area during Tudor times. This funded a substantial chapel that was built in the 16th century on the site of Dwynwen’s original chapel. 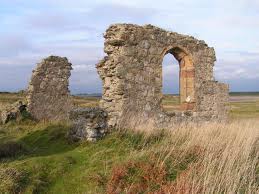 The ruins of St Dwynwen’s chapel

Last year (Jan 2013), a project to restore the chapel was begun and below is a link to a short video giving a progress report and some views of the island:

Update: BBC Wales have just showed a news item on the latest status at St. Dwynwen’s – see our lads at work via this link here

The island is beautiful, wild and feels far more remote than it is nowadays. It can be a bleak, windswept place at any time if the year, but especially so in the winter. Here are a few of my views featuring some of the landmarks of the place

The lighthouse with the Snowdonia mountains behind

The Memorial cross is also known as St Dwynwen’s cross 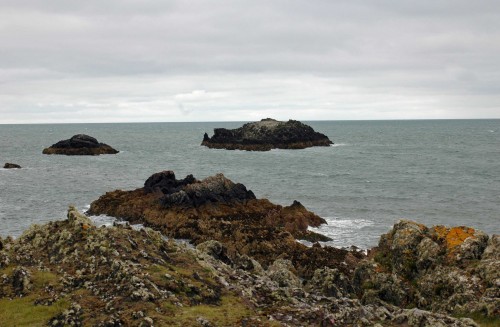 Some of the jagged rocks that surround the island