Thistle is the common name of a group of flowering plants typically characterised by leaves bordered with sharp prickles, mostly belonging to the family Asteraceae.  Prickles or spines are not always confined to the margins of leaves, often occurring all over the plant on surfaces such as those of the stem and the flat parts of leaves. These are a defensive adaptation that protects the plant from being eaten by most herbivorous animals.

From an agriculturalist’s point of view, the most common thistles are regarded at best as troublesome weeds and at worst as noxious ones. However, ecologically, the leaves of some species provide a valuable food source to the larvae of a number of lepidopterae species and he flowerheads supply pollen and nectar to an array of adult insect species. Thistle seeds are a favoured food of many members of the finch family Fringillidae, whose genus name, Carduelis, is derived from carduus, the Latin name for thistle and includes goldfinch, greenfinch and linnet.

A widespread and common thistle, the Spear Thistle has the classic thistle appearance – purple, fluffy-looking flowers sitting atop a spiny ball and may well have given rise to the Scottish national emblem. As with other thistles, it can become a nuisance on agricultural land and is often considered to be a weed. The spear thistle is usually a biennial plant although the leaf rosettes can survive as long as 4 years before finally flowering. This robust thistle can reach between half and over a metre in height under favourable conditions. The plant is often solitary.

The flowers are lilac or magenta and are larger than creeping or marsh thistle flowers, reaching up to 4 cms in diameter. Stems are winged and spiny. The leaves are spear-shaped, pinnately-lobed and spiny and give the plant its common name. The upper surface ranges from dark green to light grey. The under surface is green. The leaves are waxy and end in sharp “spear-like” prickles which are tipped with yellow.

The average number of seeds per flower head is around 100 but there can be up to 340. Seed production per plant may vary from 1,600 to 8,400 seeds. More seeds are produced when ample soil moisture is available during the growing season. Seeds are mostly dispersed during August and September.

Spear thistle spreads only by seed. Unlike creeping thistle (C. arvense), the feathery pappus remains attached firmly to the seed as an aid to wind dispersal. Most seed is dispersed less than 2 m from the parent plant and only 10% travel more that 32 m after reaching higher air currents.

The seeds are attractive to ants that may aid their dispersal and also to finches, particularly goldfinches and linnets.

Thistle seeds are a favourite food of the goldfinch

This thistle, seen throughout Scotland and the Western Isles has been Scotland’s national emblem for hundreds of years. There are several versions as to how the thistle became Scotland’s symbol, most are set around the reign of Alexander III (1249-1286) and in particular the events surrounding the Battle of Largs in 1263.

At one time, Scotland was part of the Kingdom of Norway although it attracted very little interest until 1263 when King Alexander III proposed to buy back the Western Isles and Kintyre from the Norse King Haakon IV. That provoked King Haakon of Norway and in the late summer of 1263 he set off for the Scottish coast with a large fleet of long ships, intent on conquering the Scots. Gales and fierce storms forced some of the ships onto the beach at Largs in Ayrshire, and a Norwegian force was landed.

Legend has it that at some point during the invasion the Norsemen tried to surprise the sleeping Scottish Clansmen. In order to move more stealthily under the cover of darkness the Norsemen took off their shoes, but as they crept barefoot they came across an area of ground covered in thistles and one of Haakon’s men unfortunately stood on one and shrieked out in pain, thus alerting the Clansmen to the advancing Norsemen. His shout warned the Scots who defeated the Norsemen at the Battle of Largs, thus saving Scotland from invasion. The important role that the thistle had played was recognised and so was chosen as Scotland’s national emblem.

The Order of The Thistle

In 1470 that King James III ordered that the image of this plant’s flower be placed on silver coins and also then a little later In 1540, King James V established the Order of the Thistle, a high chivalric order of Scotland. He and his 12 knights each wore a badge depicting a star, a thistle and the words “no one harms me without punishment.” 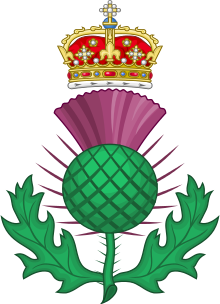 Today the thistle is found in many Scottish symbols and is used as part of the name of several Scottish football clubs. The thistle, crowned with the Scottish crown, was the symbol of seven of the eight former Scottish Police Services (from which a new national Police Service was formed in 2013), the sole exception being the former Northern Constabulary. The thistle is also the emblem of Encyclopaedia Britannica, which originated in Edinburgh, Scotland.

The Thistle is also used to symbolise connections with Scotland overseas. In Canada, it is one of the four floral emblems on the flag of Montreal; in the United States, Carnegie Mellon University features the thistle in its crest in honor of the Scottish heritage of its founder, Andrew Carnegie.

Creeping Thistle is a native, perennial, rhizomatous herb, which forms extensive spreading patches and grows up to 2m+ in height. It is one of our most widespread and troublesome weeds and is listed as a noxious weed in Britain under the 1959 Weeds Act, although to little effect. It appears resistant to herbicides and readily regenerates from rhizome fragments caused by ploughing. It is also a very valuable source of nectar, pollen and seed food for many insect specicies.

Female flowerbuds are oval  in shape

Flowerheads are pale lilac in colour and up to 2cm across. Female flower buds are oval in shape; male flower buds are slightly more spherical. Bracts are purplish with spreading spiny points. Stems are smooth and spineless. Leaves are very spiny, stiff and wavy.

The male flowers produce abundant pollen. The fragrant female flowers are insect pollinated but the pollinators may only visit one type of flower.

The time from flowering to seeds becoming viable is around 8-10 days. Seeds ripen from June to September and are shed from August onwards. There may be 20 to 200 seeds in each flower head and an average of 680 seeds per stem. The seed number per plant ranges from 1,600 to 50,000.

The seeds are 4–5 mm long, with a feathery pappus which assists in wind dispersal

Creeping Thistle foliage is used as a food by over 20 species of Lepidoptera, including the Painted Lady butterfly and the Engrailed, a species of moth, and several species of aphids. The flowerheads provide nectar and pollen for a wide variety of insects.

A biennial, medium to tall plant reaching to 1.2 metres, stems spiny-winged to the top, sometimes branched above.

Flower buds are oval and bracts are purplish above and green below – sometimes cottony. Flowerheads are usually purple, 10 to 15 mm across and held in clusters of 2 to 8. Florets are reddish purple and anthers are blue-purple. The stem is winged and spiked. Leaves are linear lanceolate, pinnately lobed and very spiny, mostly unstalked, hairy above.

The pappus is slightly feathery.

This species may be confused with the Welted Thistle – Carduus crispus but can be distinguished by its feathery seeds. Welted Thistle has seeds with down that is unbranched.