Bodnant Gardens is rightly famed for its laburnum arch which during its peak flowering time is a truly glorious sight. Earlier in the year a friend and I visited whilst it was being pruned back, a mammoth task conscientiously performed each year, so we were very keen to see it again when it came into bloom.

information about the laburnum arch

How it looked back in mid-January this year:

I had been a little concerned that we may have missed the arch at its best, but fortunately the cooler than usual Spring weather had delayed the event and it turned out our timing was perfect. The arch was breathtaking; honestly, words and even photographs cannot come close to doing it rightful justice. 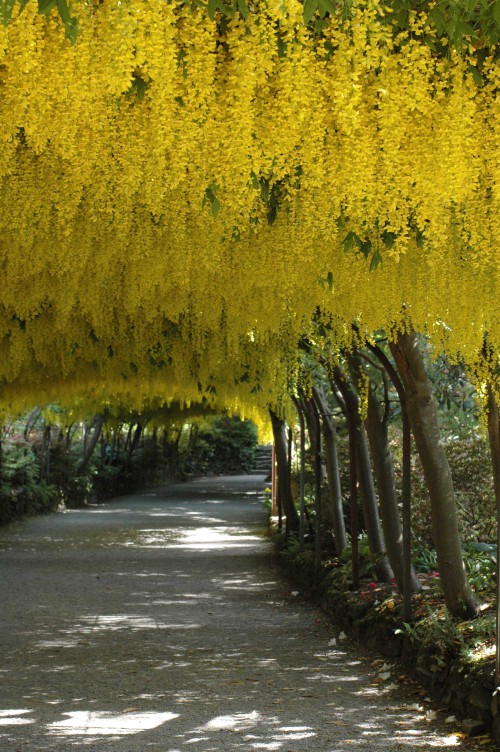 A rare moment with no people in view 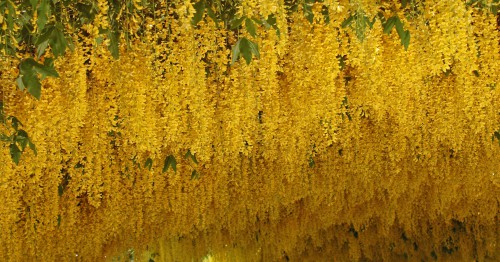 There was hardly a space between the glorious racemes of blossoms

Laburnum, or Common Laburnum –  Laburnum anagyroides  is a species of small tree in the subfamily Faboideae of the pea family Fabaceae. The trees are native to the mountains of southern Europe from France to the Balkan Peninsula. The trees are deciduous. The leaves are trifoliate, somewhat like a clover; the showy flowers are yellow, fragrant and held in pendulous racemes 10–30 cm (4–12 in) long in spring, which makes them very popular garden trees. InL. anagyroides, the racemes are 10–20 cm (4–8 in) long, with densely packed flowers. All parts of the plant are poisonous, and can be lethal if consumed in excess. 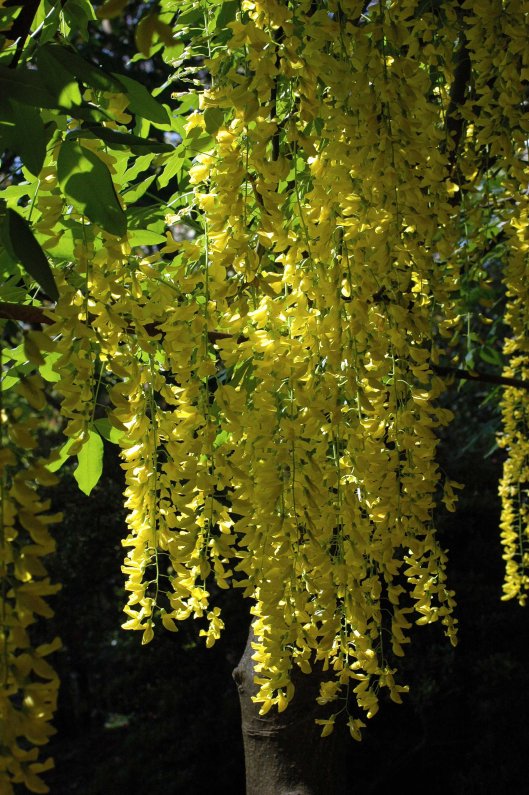 Having fulfilled the wish to see the magnificent, but artfully manipulated arch, I was keen to explore the wilder side of the rest of the grounds. 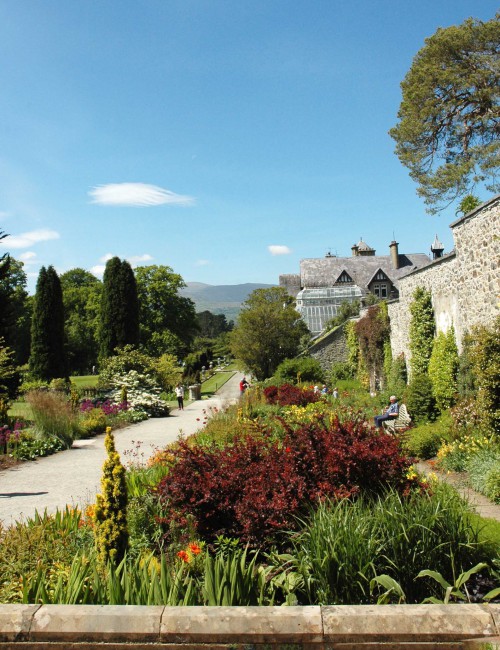 The walkway leading down from the arch 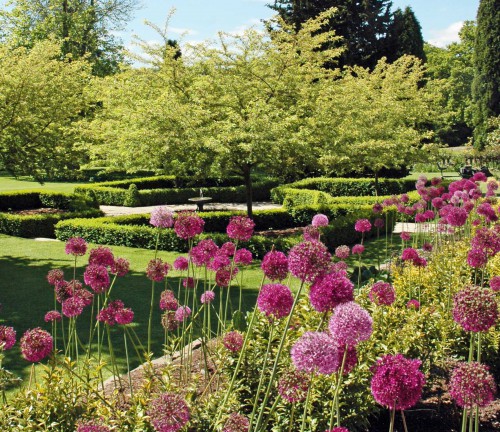 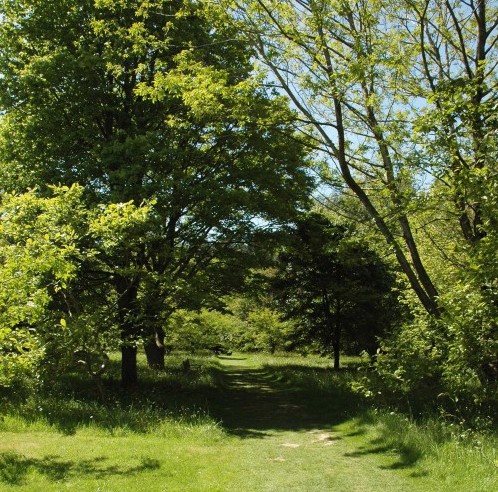 Pathway to the wilder side of the garden

Then along a pathway that is ‘semi-wildly’ planted with long grass and flowering plants that I think are species of Asphodel.

From their appearance I think these are a species of Asphodel

Along a newly-opened woodland path alongside a stream

Being a warm, sunny day our walk was much about light, dappled shade, water both running and still that held deep reflections of the lush foliage above it.

Beneath a canopy of white blossomed rhododendron 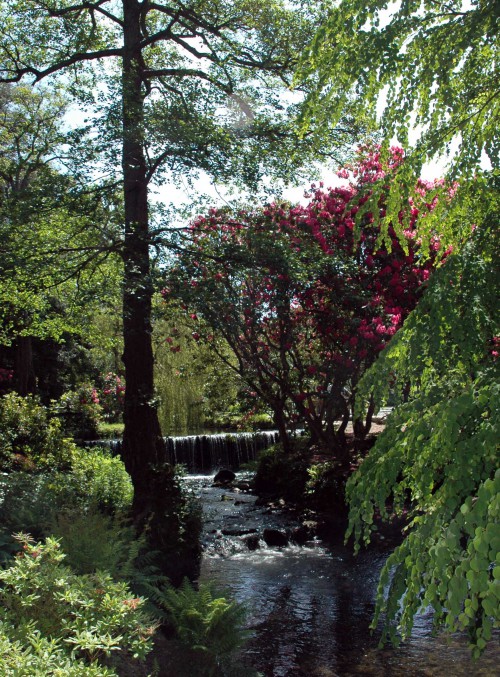 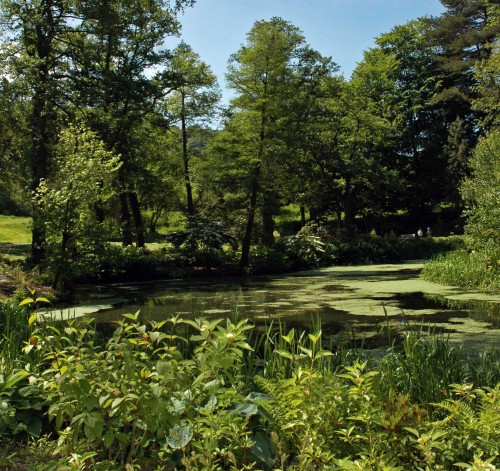 The Skating Pond and its environs, appropriately named ‘Far End’ are a newly restored area of the Gardens and only recently opened to the public.  The area was originally named the ‘Wild Garden’ and is believed to have been designed to give a naturalistic feel, recreating what was seen and experienced in nature. Sightings of kingfishers, herons, otters and woodpeckers are all possible here.

Dozens of brilliant blue damselflies flitted around the edge of the pond, pausing to rest on the foliage that lines its edges. 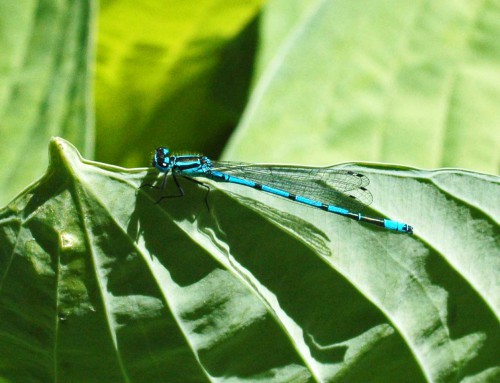 And I have never seen as many tadpoles as there were swimming in ‘schools’ around the lily pads. 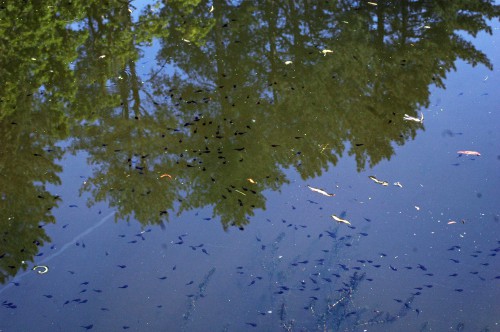 A small number of the hundreds of tadpoles in the pond 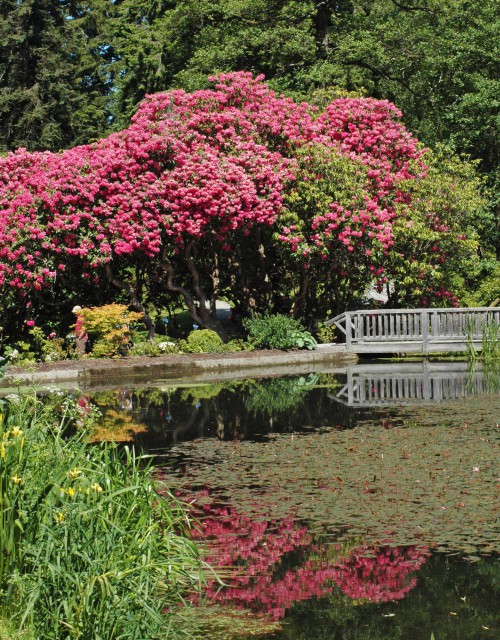 across the Skating Pond

There is a lovely gingko biloba, one of the most ancient of tree species, growing in this part of the garden 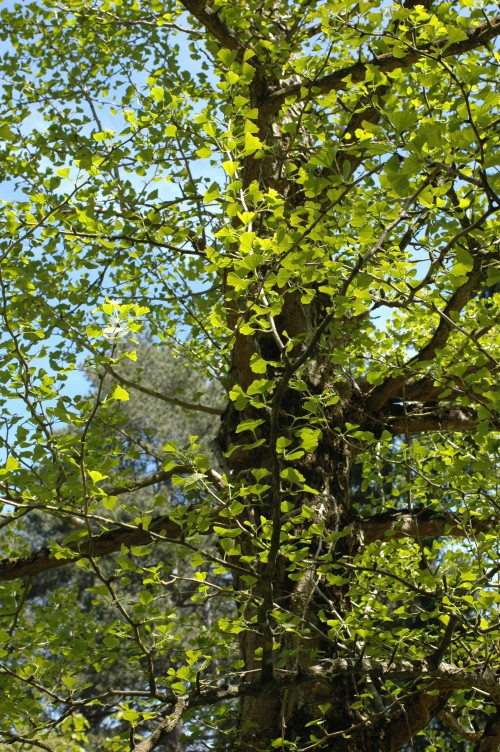 and beneath the tree beautiful blue Meconopsis, or Himalayan Poppy 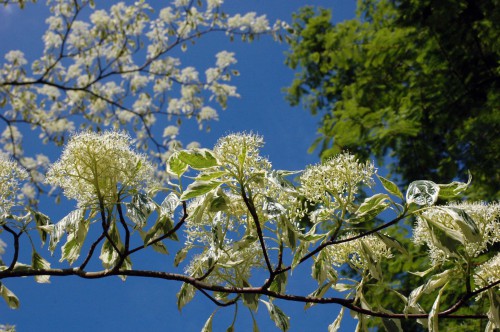 We stopped for refreshment at the café in the Dell, sitting in front of this unremarkable cotoneaster bush which we soon noticed was alive with dozens of nectaring honey bees. 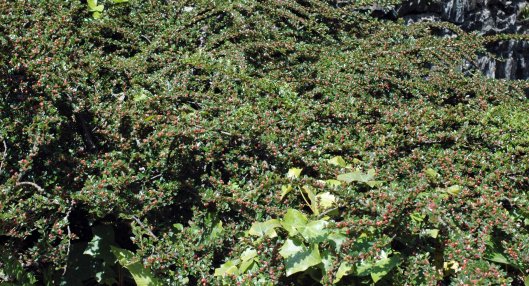 The place to bee 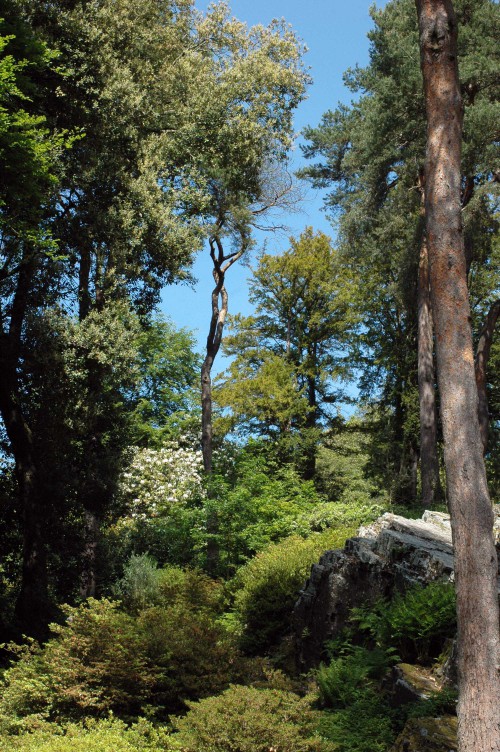 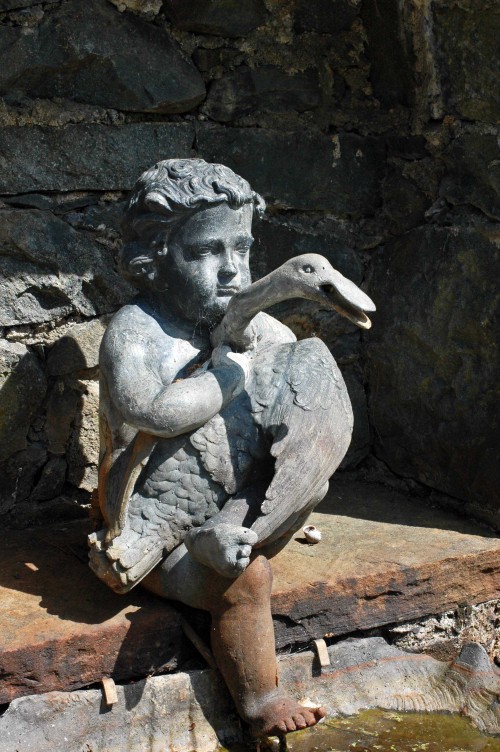 A determined small boy holding onto an objecting swan

View from an upper terrace garden onto a lily pond

water lilies in the formal pools of the terrace gardens

On the lily pads that adorn the formal pools of the Terrace gardends were more damsel flies, the males gripping onto their captive females preparing to take off for the task of the depositing of eggs. The females of this species occur in two colour forms; some are blue like the males, others, as here are green. 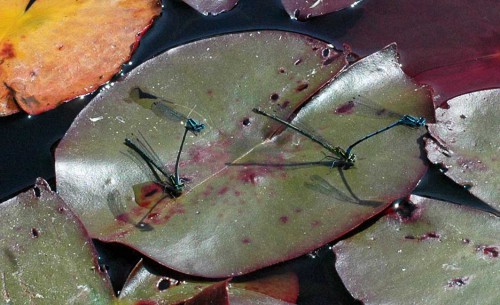 Between the lily pads we  were lucky to spot two newts swimming near the surface. I didn’t have my long lens with me so this is the closest I could get leaning over the edge of the pool, but I think it’s a Common or Smooth Newt.

Newt in a lily pond 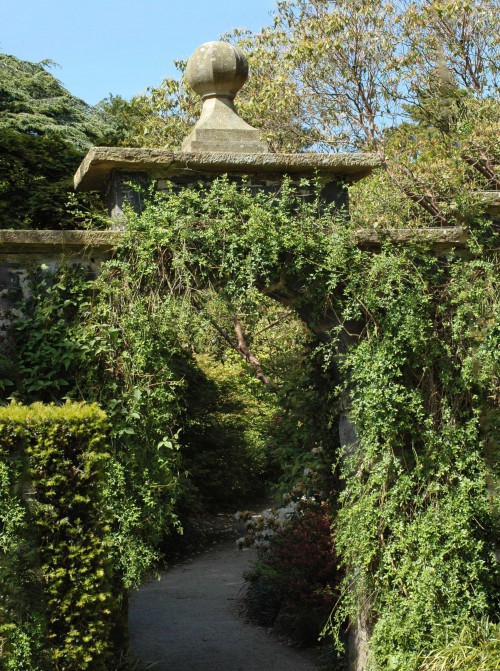 An intriguing archway in a stone wall tempting further exploration

Blue flag irises amid the curious flowers of Nectaroscordum siculum

I loved the colour and form combination of the blue flag irises and unusual ornamental onion plants that had umbrellas of hanging, bell-shaped flowers. A nearby plant label named them as Nectaroscordum siculum  and I think they may commonly known as Sicilian honey garlic.

We concluded this tour of my favourite garden savouring the aromas of some of the newly-opening blooms in the rose garden which will be glorious in a few weeks time….. there’s always something here to tempt you back.

8 thoughts on “Through the Laburnum Arch”