This wonderful place, one of my  favourite places on earth, is completely exposed to the elemental forces of the Irish Sea; it is subject to frequent strong winds which may be ideal for kite surfing, but can make walking physically difficult and literally take your breath away. 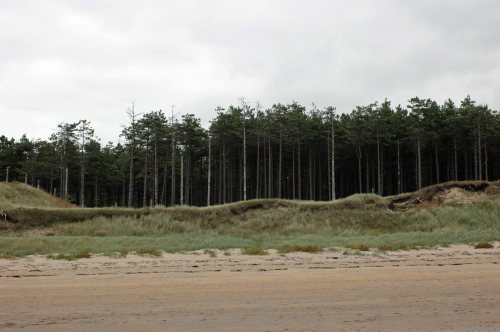 Afforestation of the shifting sands on the north side of the Warren began in 1947, partly to protect the village. Artificial dunes were created and the area planted with Corsican and Scots pine.

Newborough Warren (Welsh: Cwningar Niwbwrch) is located near the village of Newborough (Niwbwrch). It is a large dune and beach system covering 2,269-hectares (23 km2): approximately half of the area is worked as a conifer plantation. The whole of the site is designated as an SSSI (site of special scientific interest) and with the exclusion of  the forestry area is a National Nature Reserve.
The area has a fascinating geology, with rocks originally placed by volcanic actions further formed into fascinating natural sculptures by water and wind-blasted sand. 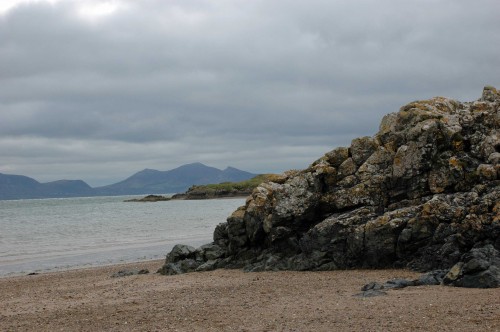 Limestone rocks on Newborough beach, tip of Llanddwyn Island behind and mountains of the Llyn Peninsular form the background 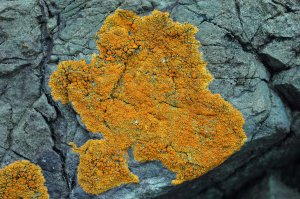 As well as supporting a diverse and bountiful flora, Llanddwyn has a fascinating Precambrian geology with features such as pillow lava and jasper formations. I love to photograph the varied rock formations, especially as they stay obligingly still regardless of the weather : but the rocks are not just characterful, many support a variety of lichens and plants. 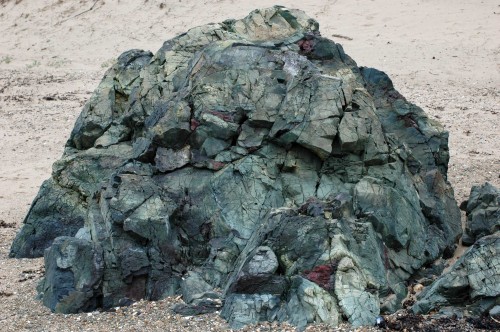 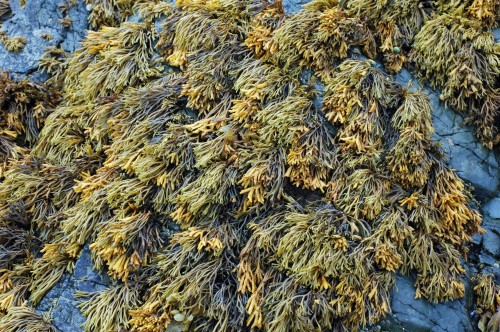 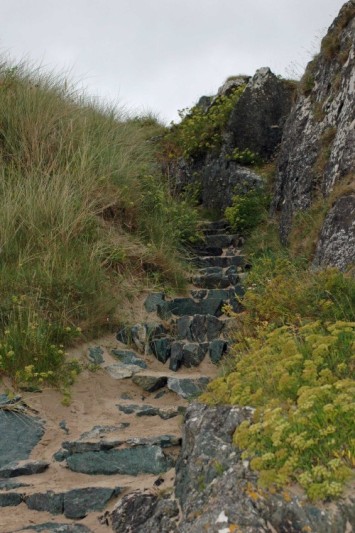 Steps cut into the rock, edged with Samphire

Llanddwyn is not quite an island: it remains attached to the mainland at all but the highest tides and is easily accessed.

A set of rocky steps lead up onto the track that follows the coast of the island rather than the main, more central one.

The name Llanddwyn means “The church of St. Dwynwen”. Dwynwen is the Welsh patron saint of lovers, the Welsh equivalent of St. Valentine, and the island is alternatively named ‘Lover’s Island’.

The tiny island is incredibly species-rich in both its flora and fauna. The habitat created by bare sand, wet hollows and short turf supports plants such as dune pansies and marsh orchids and provides ideal nesting conditions for skylarks.  For centuries rabbits cropped the grass short, helping to maintain the necessary balance, but in 1954 their population was decimated by the disease myxomatosis, leaving the dunes in a vulnerable condition and unable to support the plants and animals. The rabbit population has recuperated significantly, but now cattle and ponies assist with the grazing and keep unwanted vegetation at bay.

Their presence has necessitated the installation of some fencing and a cattle grid and gates to prevent them straying, but the gates are beautifully crafted and a feature in their own right. 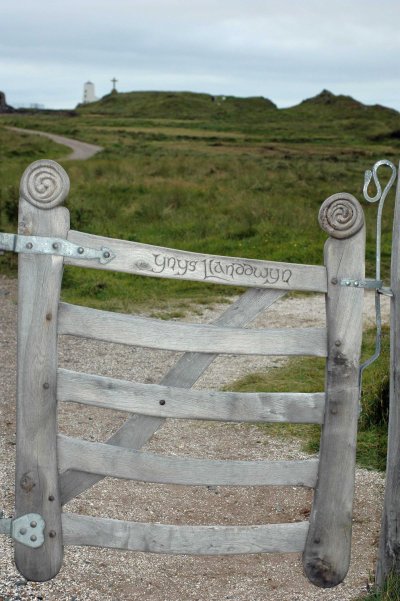 Views from the raised track are spectacular, the one below is of the top end of Newborough beach; the three small dots on the sand on far right of the image were people on horseback. What a wonderful place to do that. 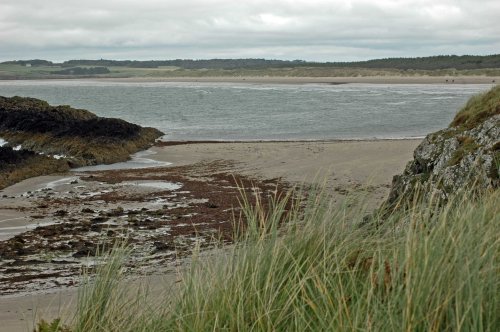 View from the island to the top end of Newborough beach

The cliffs around the island support a wide variety of nesting seabirds, including cormorants, shags and oystercatchers. Ynys yr Adar (Bird Rock), a small islet off the tip of Llanddwyn, throngs during the spring with one percent of the total British breeding population of cormorants. Waders such as turnstones and sandpipers are found along the coast and terns can be seen fishing in the bay. The mammal population is supplemented by a flock of the unusual Soay sheep that graze near the chapel. 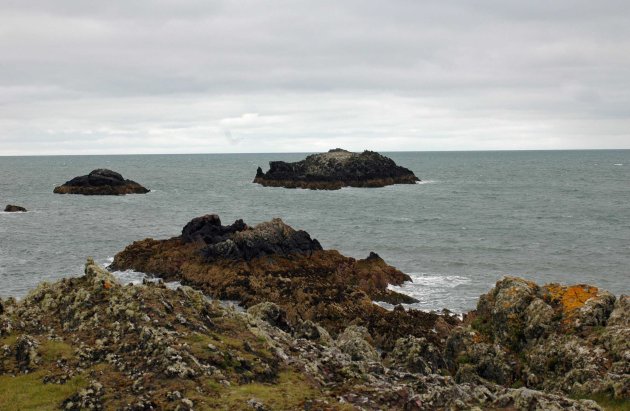 There is a breeding colony of Cormorants here, holding 1% of the total British population, many using the small rocky island of Ynys yr Adar (Bird Rock) off the tip of Llanddwyn 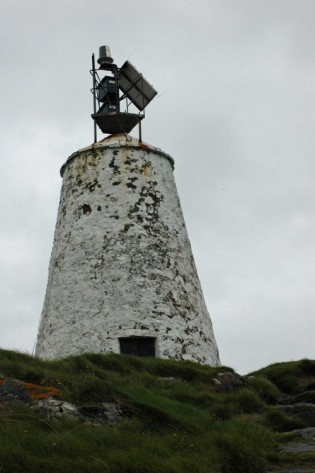 Llanddwyn Island is situated near the southern entrance to the Menai Strait and became important as shipping of slate from the ports of Bangor, Caernarfon and Felinhelli increased.

A beacon, called Tŵr Bach (Little Tower), was built at the tip of the island to provide guidance to ships heading for the Strait. 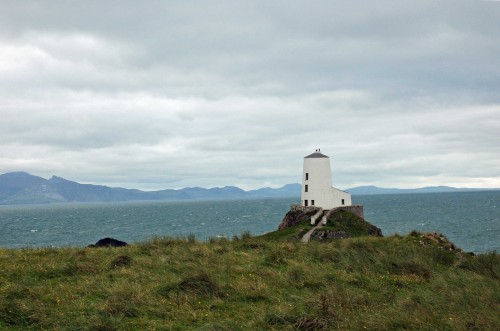 Twr Mawr with the Llyn Peninsular behind it

Another more effective lighthouse, Tŵr Mawr (Big Tower), which was modelled on the windmills of Anglesey, was built nearby in 1845. The older lighthouse has now returned to service after a modern light was placed on top. 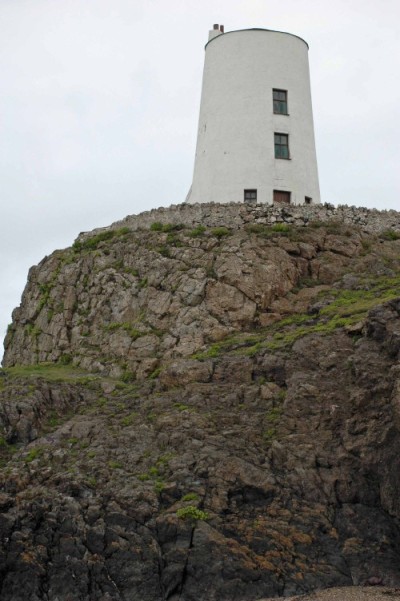 Twr Mawr on its rock platform

The small beach below Twr Mawr is bounded on one side by the high rocks that the  lighthouse is built upon, then on the other by another type of rock that is coloured in beautiful shades of purple and green-grey. 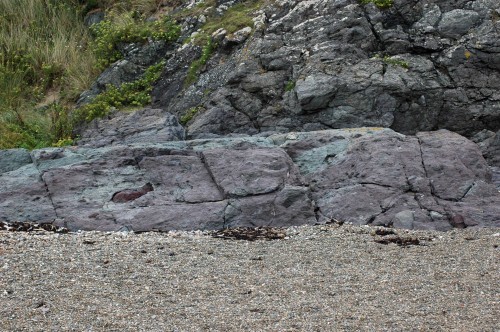 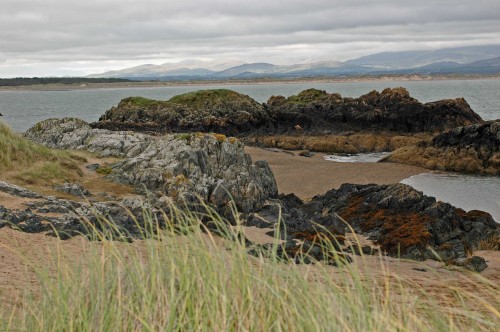 A view from the island across the ‘bottom’ end of Newborough Warren and Caernarfon Bay to Snowdonia, where some of the mountains were in sunshine

The Pilot’s cottages and cannon 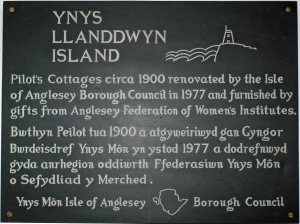 The four adjoining small cottages on Llanddwyn Island were built around 1900 for the pilots employed to assist boats navigate into the ports along the Menai Strait. Without their expert knowledge and guidance, vessels would have been in serious danger of grounding on the sand banks of this narrow and notoriously treacherous stretch of water separating Anglesey from the mainland. The boats they piloted in would have been heading mainly for the ports of Caernarfon, Y Felinheli and Bangor to collect the fine roofing slate produced in the hills of North Wales. As well as guiding commercial shipping, the pilots crewed the Llanddwyn lifeboat until its withdrawal from service in 1903. 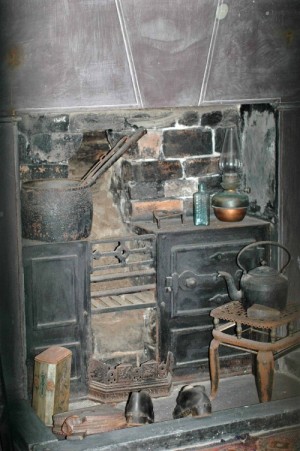 One of the cottages has been equipped and furnished in Victorian style to give an idea of how they would probably have looked when they were occupied. It is a pity that a locked metal barrier, somewhat resembling prison bars, has had to be erected to protect the rooms from the viewing public, but then I suppose it may otherwise be open to use, or abuse, as a ‘free’ holiday home.

An adjoining cottage has been used as a museum describing aspects of the island’s past with the use of some interesting story boards. One I particularly liked explains how people scraped a living from the area through farming and making saleable goods from woven marram grass. It also explains the significance of rabbits to the local economy: at one time 20,000 of them were caught and sold at local markets in just one year. The wonderful habitat that the rabbits have helped to create is, as in other places such as Skomer Island, simply a by-product of their lifestyle. 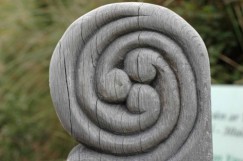 As mentioned previously, Llanddwyn Island is also known as ‘Lover’s Island’ and is named for St. Dwynwen. The mythology surrounding has several slightly varying versions, but the essence of the stories is similar. 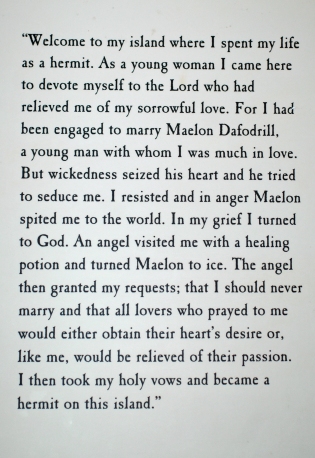 Dwynwen lived during the 5th century AD and was one of 24 daughters of St. Brychan, a Welsh prince of Brycheiniog (Brecon). She fell in love with a young man named Maelon, but rejected his advances. This, depending on which story you read, was either because she wished to remain chaste and become a nun or because her father wished her to marry another. She prayed to be released from the unhappy love and dreamed that she was given a potion to do this. However, the potion turned Maelon to ice. She then prayed that she be granted three wishes: Firstly that Maelon be revived, secondly that all true lovers find happiness, and lastly that she should never again wish to be married. She then retreated to the solitude of Llanddwyn Island to follow the life of a hermit.
Dwynwen became known as the patron saint of lovers and pilgrimages were made to her holy well on the island. It was said that the faithfulness of a lover could be divined through the movements of some eels that lived in the well. This was done by the woman first scattering breadcrumbs on the surface, then laying her handkerchief on the surface. If the eel disturbed it then her lover would be faithful.
Visitors would leave offerings at her shrine, and so popular was this place of pilgrimage that it became the richest in the area during Tudor times. This funded a substantial chapel that was built in the 16th century on the site of Dwynwen’s original chapel. The ruins of this can still be seen today, and as I write are being restored.

There are two stone crosses that are significant landmarks on the island. 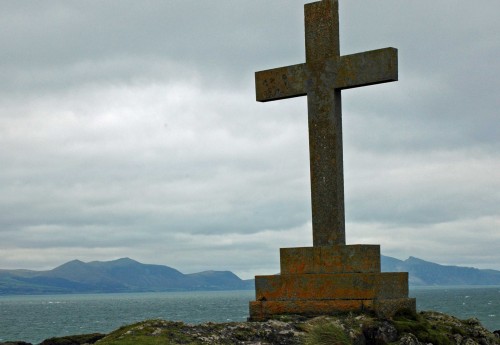 There are two crosses on the island both commemorating St. Dwynwen. One is a huge conventionally plain stone cross, placed on what must be the highest point of the island and referred to as the Memorial cross or as St Dwynwen’s Cross.  The cross is inscribed ‘On the sixtieth year of Queen Victoria’, which may refer to it having been erected in 1879. Although attributed to the saint, from its lofty position overlooking the water it would also seem fitting that it may also commemorate those who lost their lives at sea off this coast. The other is a Celtic Cross and although it is a modern one, this was erected to commemorate the death of St. Dwynwen in the year 465. 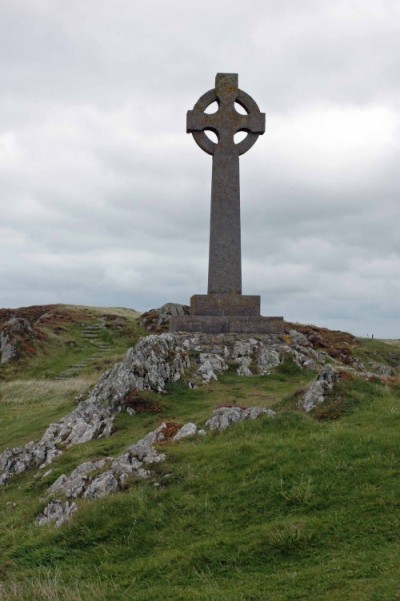 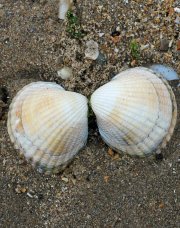