The myriad of little rivers and streams that run from our mountains and hills come alive following prolonged rainfall or when filled with melted snow. Many of them are inaccessible and flow through privately owned land, so we are privileged here to be able to enjoy close access to the sights and sounds of one such waterway: the river that flows through the village of Old Colwyn and ends at Colwyn Bay, both of which take its name – the river or in Welsh afon, Colwyn.

This walk follows a length of the river Colwyn upstream from where it reaches the sea  at Colwyn Bay at the end of the Promenade, takes the scenic route through the oldest part of the village of Old Colwyn then continues to the far end of the wooded dingle of Fairy Glen and back again. It’s not a long walk and mostly fairly easy going. It follows a section of the North Wales Path and is also part of the Old Colwyn Heritage Trail so combines a bit of local history with nature and wildlife, which ticks all of the boxes for the perfect winter walk for me. 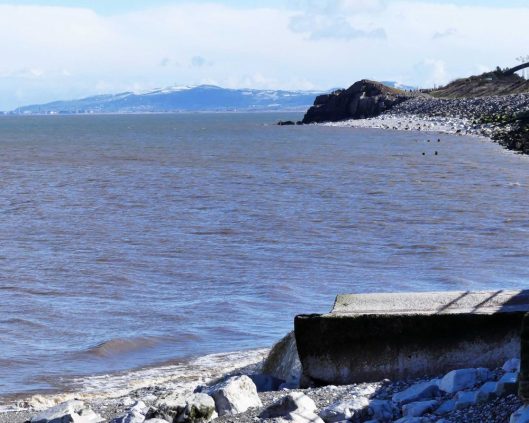 Splash Point of the river Colwyn into Colwyn Bay. Snow-capped Clwyddian Mountains on the far horizon.

The last few metres of the river’s length are contained and manipulated by stone and concrete to direct its waters under roads, bridges and the viaduct, then finally a culvert beneath the Promenade channels it to its end at a Splash Point from where it cascades into the sea.

The viaduct was built in 1847 as part of the Chester-Holyhead railway line engineered by Robert Louis Stephenson. The bridge behind it carries the A55 North Wales Expressway 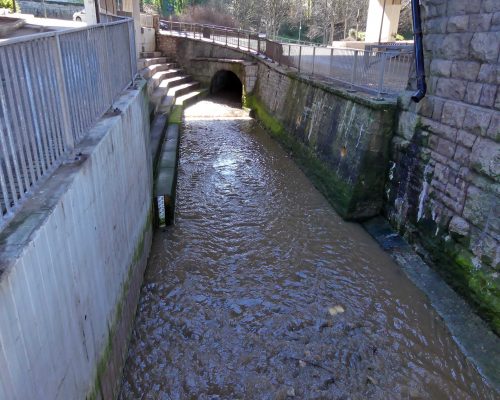 Beneath the viaduct, know locally as ‘The Arches’, the surface of the water is textured as it rushes over its stony bed and its sound amplified by the stone walls that contain it, still audible above the noise of traffic and the occasional train passing overhead.

Once beneath the bridges and on the path past Myn y Coed woodland calm is restored and the sounds of the river and birds singing fill the air. 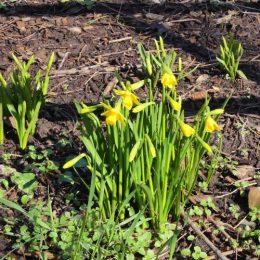 I stopped on the footbridge to listen and to check for Grey Wagtails that sometimes hunt along this stretch of the river; none here today but I know they have other favoured spots.

upstream from the footbridge at Myn y Coed

The path upstream curves around the corner to run parallel to Beach Road, passing in front of the building that was once the Coachhouse to the Myn y Don Mansion. The river races down the slope here, carrying with it bits of shrubbery from somewhere along its path.

Near the beginning of Tan y Bryn Gardens is a weir with blocks of stone either side that look as though they may once perhaps have had sluice gates? 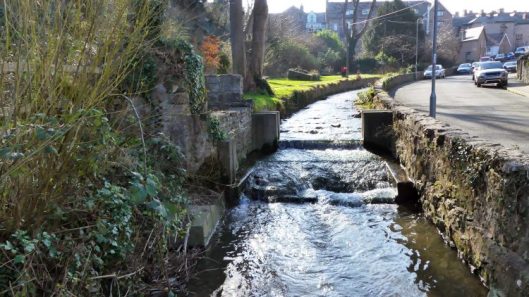 There’s an interesting variety of native and more exotic trees here with an under-storey of shrubs and plants that is perfect for birds. Today Blackbirds seemed to be everywhere, singing from variously elevated spots or rummaging around in leaf litter. There were at least three males in close proximity to one another, resulting in much chasing. The one in my photograph had been singing until I arrived and put him off his stroke.

Carrying on through the gardens there were robins singing from several spots too and I finally caught one in action.

Almost at the end of the Garden path I was thinking I still hadn’t seen a Grey wagtail and that sometimes I’ve had better luck seeing them hunting on the nearby rooftops… then a bird skimmed past just over my head making that familiar rattling call. A wagtail that, lo and behold, carried on over the water to the very rooftops I was standing looking at. Although some distance away, it was a lovely colourful one with bright yellow breast and rump, that stood out nicely against the blue-grey slates and patches of lichen.

I had reached the tunnels beneath the buildings that allow people and the river to pass through them. 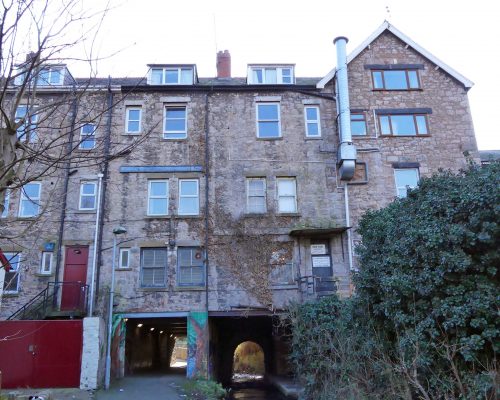 The tunnel is short, lit artificially and its walls are decorated with colourful professional-looking graffiti. It’s not my favourite part of the walk though, especially when as today it was littered with rubbish and doggy deposits. Such a shame as the path to here was spotless. 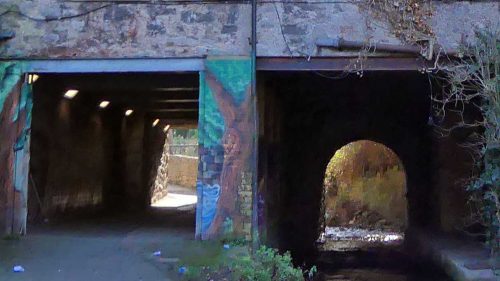 I usually walk through here at speed, admiring the wall art out of the side of my eye as I pass it, but today I stopped to photograph my favourite part of it. It depicts the buildings above where they front onto Abergele Road, harking back to the days when the tram was running. Next to that image is one of the viaduct before it was obscured by the Expressway bridge.

At the other end of the tunnel a sign indicates the way back to the beach and the North Wales Path logos are beneath it.

The path stays by the river through this attractive little area, named Llawr Pentre which is the oldest part of the village, then leaves it for a short while as you take the steps you find on your left. At the top follow the signs that point right to Fairy Glen and the North Wales Path. 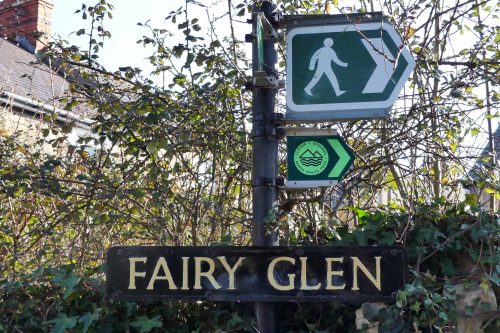 The Local Nature Reserve of Fairy Glen in Old Colwyn is one of several places locally known as ‘dingles’. Dingle is a charming and evocative noun used to describe a small, narrow or enclosed, usually wooded valley or a deep hollow or dell. Fairy Glen was once more manicured and a much favoured place for holidaying Victorians to take in the fresh air on a leisurely riverside stroll. Today the pathway is on the route of the North Wales Path, but is mostly used locally as a shortcut to the village centre or by folks walking their dogs. It may not appear as groomed as it once did, but this fragment of a once-extensive ancient woodland is cared for and appreciated and it provides a habitat for a good variety of wildlife, particularly woodland birds. There are some lovely big old trees and shrubs here, but the greatest draw and asset for wildlife is surely the fresh clean accessible water.

At the base of a tree I found golden-yellow Lesser celandines, some of them already ‘going over’. 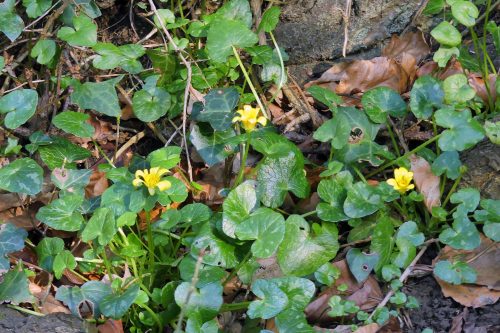 Most of the length of the path is fenced allowing flora and fauna to remain undisturbed. The fence rails are a great place to spot birds too; many use it as a perch and some as a place to forage for insects amongst the ivy. 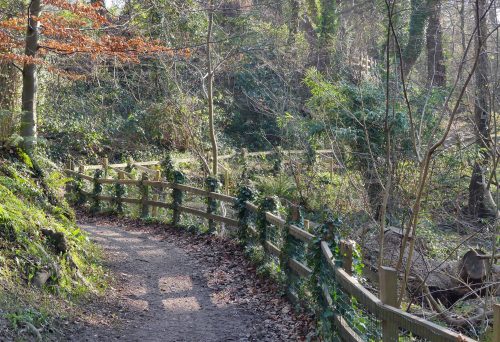 There were a number of Blue tits foraging in the trees around and overhead me and I heard Great tits singing. The songs of Robins rang out at regular intervals, each one pausing occasionally to listen to others nearby then responding. I always thought that this might have been why the ’round Robin’ style of singing we learnt at school was so-named, but apparently not – it relates to much more boring things like circularised documents. I prefer my own version! There were Blackbirds all over the place here too. This one took to the fence while I passed but soon resumed his hunt for worms in the leaf litter below. 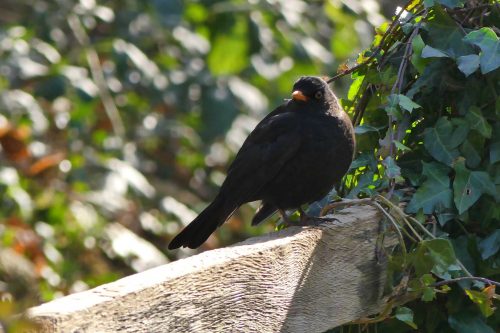 Wild garlic is growing fast and the warm sunshine was already drawing out its distinctive aroma. 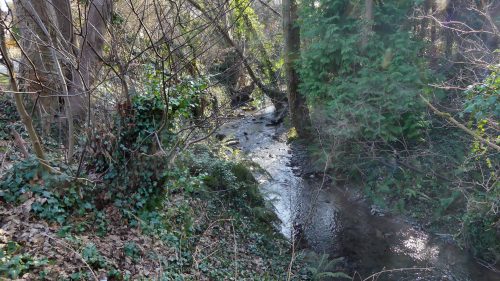 The damp shady conditions here are perfect for ferns. 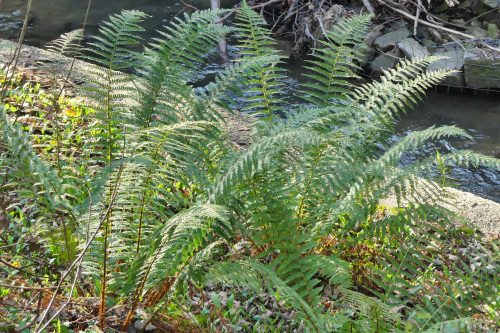 I had a lovely close encounter with a small flock of charming Long-tailed tits. 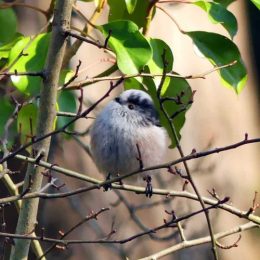 Rainwater channels into the river at this weir adding to its volume creating a considerable foamy ‘race’ down its length.

This stand of tall old pine trees is a good spot to look out for Coal tits; I’ve seen them here on several occasions, but not today.

At the base of tree a collection of new Spring greenery of varying shades and leaf forms; ferny Cow parsley, elegant Arum and the round leaves of some pervading Winter heliotrope which seems to be popping up all over the place lately. There are also a few leaves of Nettle and the ubiquitous Ivy. 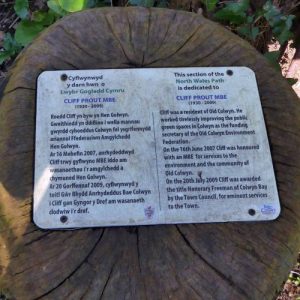 The path through the Glen ends at Pen y Bryn Road. As at the beginning of the path at Myn y Don there is a plaque commemorating a local man named Cliff Prout who did a tremendous amount of work improving the public local green spaces on behalf of this community. The world needs more Cliff Prouts – he did a great job.

There’s much to be said for a circular walk, but I find it can be just as interesting to go back the way I came. I often see things I missed on the way through being distracted by something I spot; the perspective is different, the light is different and of course the time is different. I tend to ‘save’ things that aren’t likely to move for a closer look on the way back too, such as these trees. I liked the contrast of shapes and shades of the evergreens seen through the more delicate catkin laden Hazel in the foreground and all set off beautifully by that beautiful deep blue winter sky. 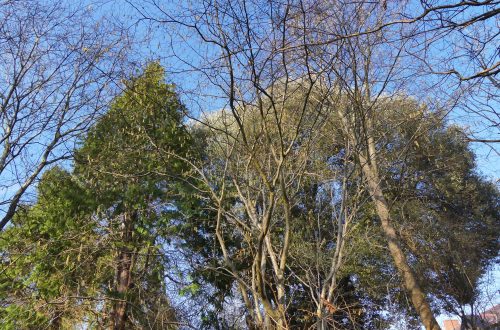 I met the Blackbird again, still hunting worms successfully, he’d just swallowed one as I took his picture.

I had a closer look at this felled tree which I think from the bark may be a Sweet chestnut. It’s wood has been left to integrate into the fabric of the woodland floor to provide habitat for invertebrates etc. I hope it gets left alone and is not purloined by someone with a wood-burner to feed.

This was a huge tree, a section of its trunk would easily make a small dining table. 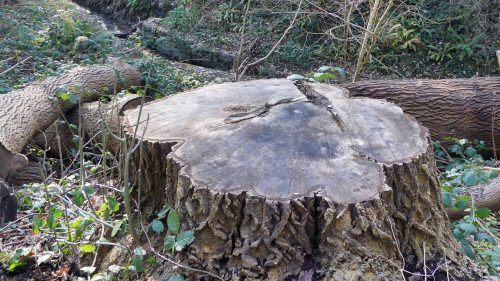 A flowering Dandelion and more shoots of Wild garlic. 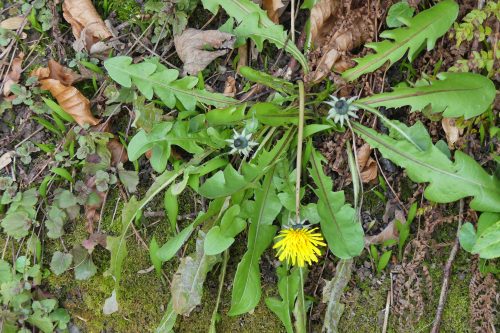 This enormous Oak tree near the entrance/exit to the Glen fascinates me. It has stabilised itself in an almost-perpendicular position with a complex network of roots that are as thick and sturdy as branches, right on the edge of a steep bank. Beneath it are hollows you can see straight through. Perhaps this is where the fairies live. 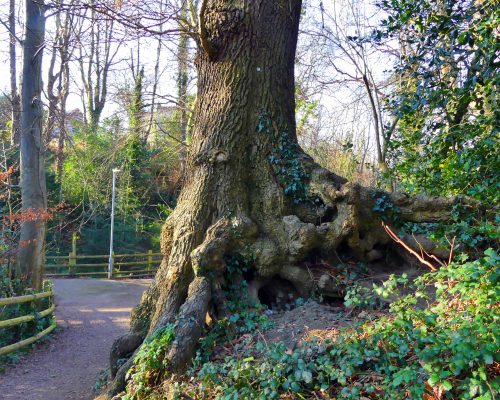 A last look at another stand of elegant, pale-barked trees whose top branches turned silver in the sunlight.

And then the river on its way out of the Glen.

Leaving the Glen and walking back past the cottages I stopped to watch Jackdaws  gathered on the chimney pots. I’m not sure what they were doing, possibly checking for any insects or spiders that may have been hiding in them, or maybe prospecting for nest sites; whatever they were doing they were disappearing right into them. 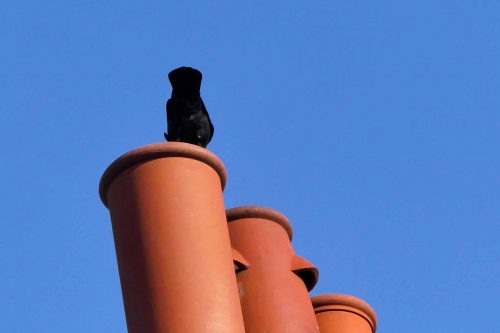 Back in the Gardens I stopped to admire  the flowers; clumps of snowdrops, daffodils and a stunning display of richly coloured hellebores all enjoying the sunshine. No insects yet  though. 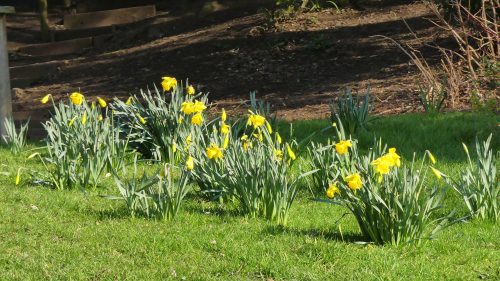 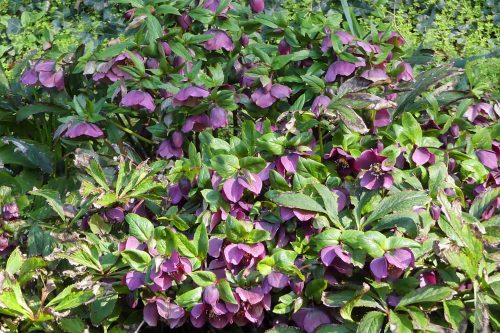 I couldn’t resist taking this shot of a perfectly matched couple walking hand in hand ahead of me. I hope they don’t mind.

The view towards the end of the gardens with the Coachman’s cottage in the bottom left corner.

All overlooked by the tower of the Folly up on the hill. 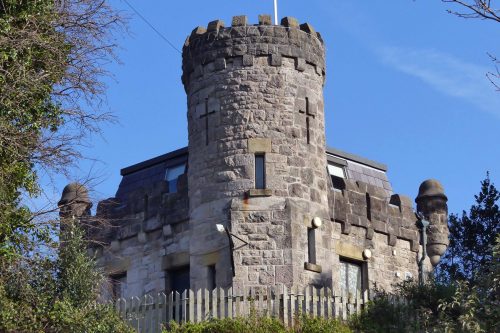 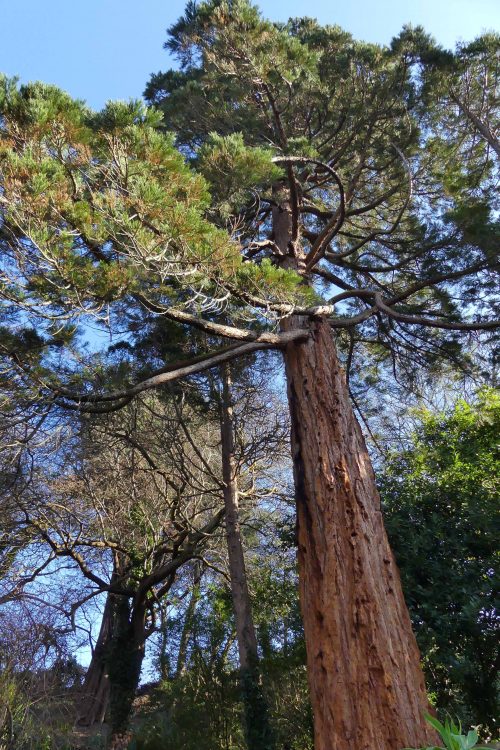 so I was sad to see that the foliage of one of them looks has turned brown as though it may be dead. 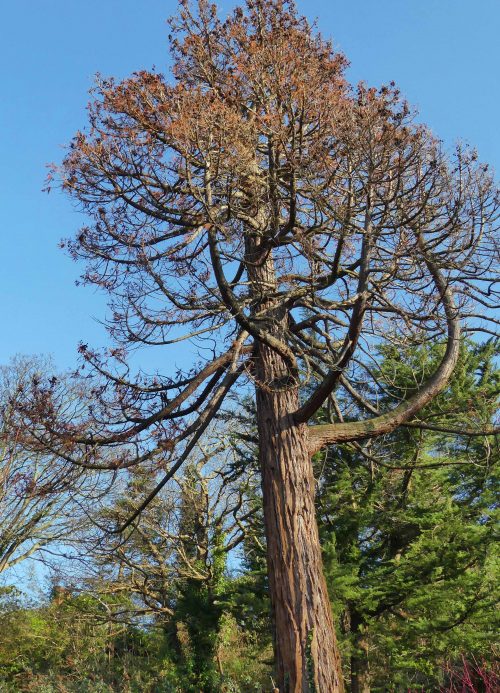 A Robin checked out a dramatic dried seed head

while a Wood pigeon investigated a mossy rooftop.

Then to finish, a promise of imminent Spring: a Wild Cherry tree with new green leaves and blossom buds about to burst.

18 thoughts on “Following a river to a Fairy Glen”