I made Wild Cabbages the main floral event of my recent walk on the Little Orme, giving them a post of their own, simply because they are not an everyday plant and because the number of plants there are and the profusion of their flowers this year would have made them difficult to miss. But of course there was much more to see there.

As late spring slips into early summer there is a blending of fading and fresh flowers and foliage. My first glimpse of the fresh was a lovely clump, (an inelegant word to use to describe such delicate flowers), of Greater Stitchwort. They were tucked tightly against a tangle of bramble, using it to support their rather weak, brittle stems. 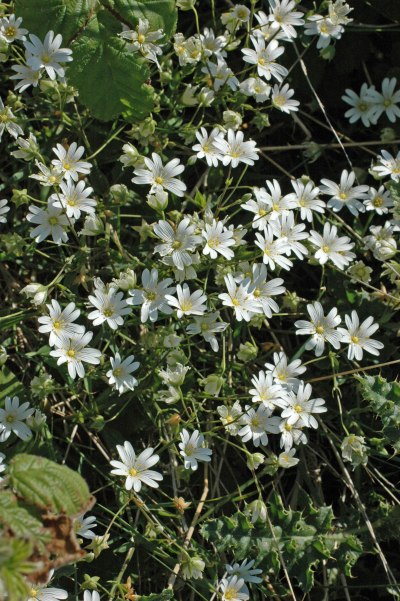 On the edge of the cliff there is a smattering of Thrift and some Sea Campion, both with fading flowers. I searched for a while to find Thrift that still looked fairly fresh, but find being able to see the seeds forming within the ‘bladders’ of the Sea Campion interesting. 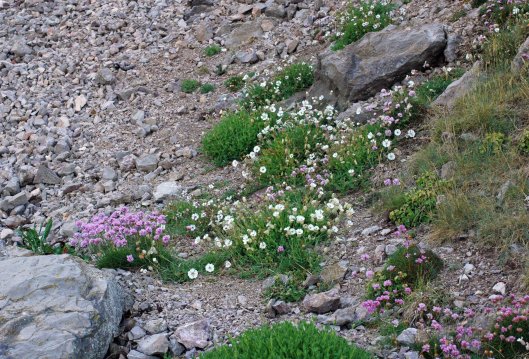 The most prolific wildflower here currently is Bird’s Foot Trefoil, which will carry on throughout the summer, providing nourishment for a whole host of fauna; a veritable live food manufacturing plant that looks beautiful too. I sat on a rock near this spot gazing at the view, contemplating life and enjoying the warmth of the late afternoon sun.

What could be prettier? Golden Bird’s-foot Trefoil against a background of blue sea and sky

There was a lot of Cormorant traffic travelling to and fro the tip of the headland, some in small groups, others alone. There are a large number of them here and their outlines can often be seen against the sky, the birds perched at regular intervals down the rock descending to the sea.

Turning back from the cliff I thought I might walk up the steep grass incline to the top of the hill, but I got halfway up and decided it might be a bit late in the day for rambling around up there, so stopped to take a photograph and walked down again.

Upholding my promise to myself to pay more attention to Ash trees I had already looked at a couple of small ones before taking this photograph. All, including this one, were less fully-leaved than those inland and all had leaves that were brown and shrivelled around their edges. I was alarmed when I first noticed that, but don’t think it’s anything more sinister than the leaves being ‘burned’ by the very cold and salt-laden winds they have been subjected to this whilst young and tender. I hope that’s all it is, there are a lot of Ash trees on the site of the Little Orme and their loss would be significant.

I walked back following the pathway at the base of  the towering rock face, leaving the surfaced track to search the grass at its side for any smaller, less showy wildflowers. There was plenty more Bird’s-foot Trefoil with a few little bumblebees rushing around hunting for nectar and little patches of Wild Thyme, just beginning to open. There were quite a few little flowers, yellow with pink-flushed buds, that looked similar to Cat’s Ear, but not quite, so more research needed there. 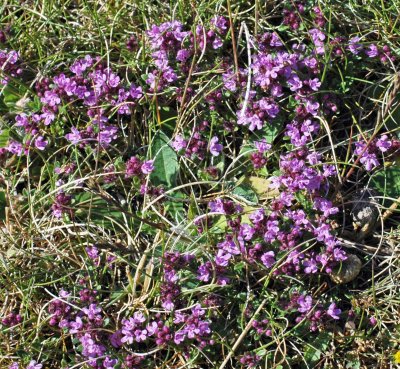 I carried on walking, diverting over to the big patch of cabbages to take photographs as seen in previous post, following the edge of the deeper quarried-out bit (all of the section of the Little Orme I have been describing above is flat as a result of quarrying activity). Where the edge of this meets the cliff wall the only way to continue is to scramble down a rocky slope. If you ever find yourself doing this, be careful as hundreds of pairs of feet taking this way down, or up, over the years have worn the exposed rock to a shiny smoothness that can be quite slippery, even when dry.

The area at the bottom of the slope has a completely different character, more along the lines of an urban wasteland than a coastal clifftop. It does back onto houses and there is an access path in from the residential area, so the ground was probably disturbed during the building process. It’s not a very large area and can appear a bit scruffy, but there is always something to see here. There’s lots of Valerian flowering now, but the plant that has gone a bit crazy and is threatening to dominate all, is Alexanders. According to Richard Mabey in his brilliant book ‘Weeds’, this Roman introduction to Great Britain has apparently nationally fallen from grace recently, having suddenly altered its demeanor from that of well-behaved and fondly thought-of immigrant edible wildflower, to that of a rampant weed. 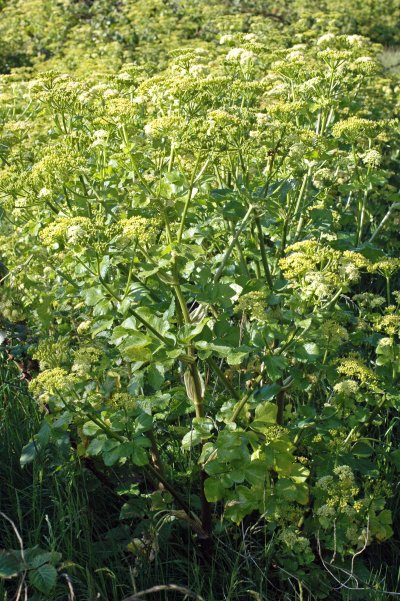 Alexanders is one of the earliest plants to put out greenery in the early spring and most of the plants here are past their best. A stately and attractive all-over yellow-green coloured plant, it was introduced here by the Romans for use as a pot-herb, having a mild celery flavour. Its culinary use continued for hundreds of years until it was replaced by cultivated celery. Perhaps this is a plant we should go back to foraging to help keep it under control rather than destroy it.

Alexanders is going to seed now, but there are still flowers

While I was prowling around the Alexanders plants I spotted a wild rose shrub in their midst and suddenly made a mental connection with a blog post from last August, which included a bit about the Robin’s Pincushion galls that appear on these plants. I mentioned in it that while the completed growth begins as bright red in colour, over the months they fade to a dark red-brown before the new adult wasps emerge in the spring and thought I’d try to find one. I remembered where the gall I photographed then was located, but thought I’d have a quick look at this one on the way to it. As luck would have it, there was a nice fat dark gall there too. As I got close with the camera, even more luck – there were a number of tiny little wasps crawling around on the gall and flying on and off, back and forth between it and rose leaves just a few centimetres away.

Dry Robin’s Pincushion with little wasps on the surface

I am not claiming that these are the wasps, scientific name, Diplolepsis rosae, that cause the growth of the gall to house their larvae. Having looked at other people’s images, I rather think that although the colouration is similar, the abdomens of the ones in my pictures are more elongated and tapered than those in  images of the ‘right’ one. I thought perhaps the insects were just emerging from the gall, but that also didn’t help as I learnt that the original larvae are subject to parasitism by other species of wasp and they in turn may be got at by yet another species. They may have just been seeking prey, or maybe somewhere to locate their own eggs, or even just roosting for the night. I am sure they are some species of wasp though. If anyone can help with identification I’d be delighted. 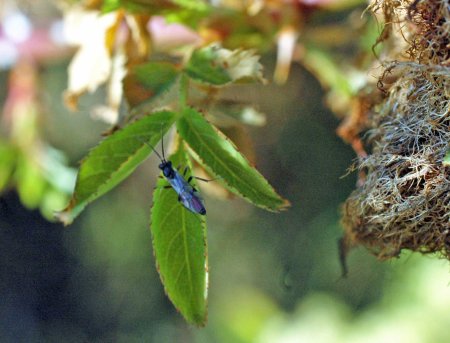 Wasp from gall, resting on a nearby rose leaf. Size increased many times, these insects were really tiny.

It was almost half-past six by the time I thought I should be getting home and the sun was beginning to sink behind the mass of the headland. It was creating a lovely glowing effect on the landscape and casting an interesting light upon a beautiful patch of buttercups that had pretty White Campion growing up through it.