In UK waters Grey Seals breed during the autumn. Although the entire breeding season spans approximately 8 weeks, individual females will spend 18-20 days ashore, during which time they each bear and suckle one pup. Towards the end of lactation they come into oestrus, as soon as 16 days after giving birth, and are mated.

Another windy day on the headland of the Little Orme, but sunny too and the tide was out. Perfect conditions for seeing Grey Seals hauled out on the small pebbly beach of Angel Bay. 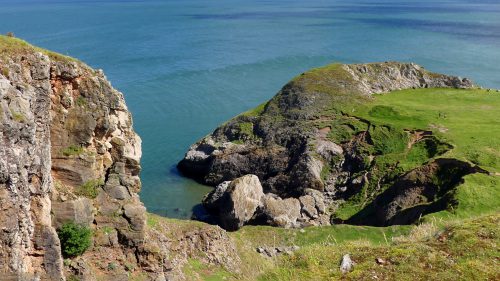 Angel Bay is an inlet on the Little Orme’s Headland on the North Wales Coast. Known locally as Angel Bay, on Ordnance Survey maps it is named in Welsh as Porth Dyniewaid.

Spotting one a short distance offshore in Penrhyn Bay was encouraging. The seal was suspended in the water with just it head above the surface facing towards the shore. They do this often and I’m sure they are ‘people watching’, as curious about us as we are about them. 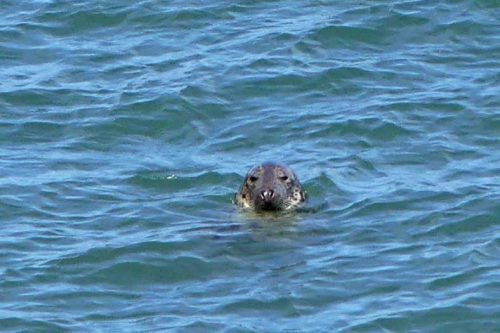 There were boys in the bay, enjoying themselves greatly by jumping off rocks into the calm sea. I’m sure they were unaware of the seals not far away from them, hidden from their view as they were by an outcrop of rock . Unwilling to risk venturing ashore as they would normally have done, some were making the best of small islands of rock uncovered by the low tide, hauling out their bulky bodies to enjoy the warmth of the sun. Unfortunately there wasn’t room for all of them and some were left to drift around keeping a watchful eye out for a space to become available. Grey Seals are the largest breeding seals we have in the UK and those on view were definitely large, quite possibly pregnant females as they do congregate at traditional pupping sites in the autumn. 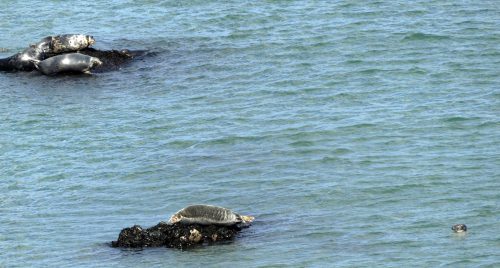 One had secured a rock of her own. She was rather beautiful, wearing a mantle of silvery grey velvet.

These three were more sociable and had left room for another.

After a bit of heaving and hauling the smaller one squeezed in, but there was no room left for more boarders.

There are nine seals in this picture – 6 on rocks and three swimming around hopefully.

The driver of one of the jet boats that take out sightseers from Llandudno pier spotted the seals and pulled in so people could have a closer look and take photographs of the seals. He must have passed the info on to other drivers as another boatload arrived a few minutes later. Then another who was a bit more intrusive and that I felt got a little too close. As I said before, seals are naturally curious themselves and are probably used to being observed from the clifftop, so they didn’t seem too bothered by the boats. 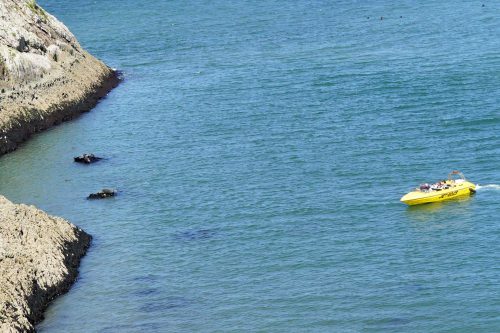 As the boat was leaving I took a short video as it is unusual to see the seals awake and moving, although they still weren’t doing much. Perhaps because they were rather put out about their lack of space the seals were quite vocal too, although most of the noise here was made by the departing boat & the wind!

An hour or so later the smaller rock had been taken over by a much larger seal; poor thing looks like she’s about to burst! 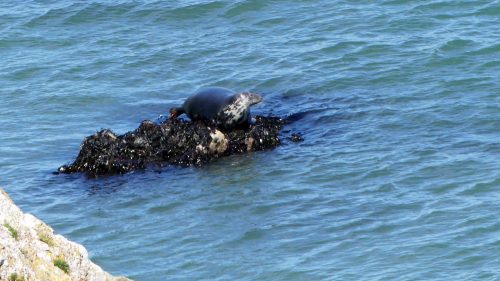 14 thoughts on “Grey Seals on the rocks”