You probably do not need me to tell you that the weather this month has, so far, been rather un-summery, particularly in this part of the country, so I won’t bore you with unnecessary details. However it has impacted on the opportunities I have had to get out and about and record the effects it has had on the local wildlife, if any. That’s not to say I haven’t been keeping my eyes open and looking for opportunities to record what I am seeing, but rainy and windy days are not very conducive to taking photographs of insects or indeed flowers that are being buffeted by the weather. 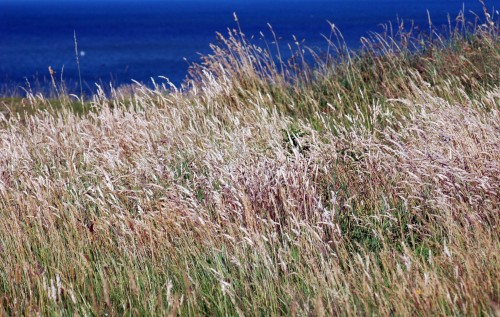 The first day of August brought a mixed bag of weather conditions, but I  tried to make the most of a sunny spell towards the end of the afternoon by visiting the Little Orme. It was windy up there, but there were a few butterflies out feeding in odd places sheltered from the wind. In the majority were Meadow Browns, staying well down in the long grass, but there were a few Gatekeepers enjoying the abundance of bramble flowers, but not settling for long enough to photograph, one of two whites and one gorgeous Tortoiseshell. There were hardly any bees or hoverflies or indeed any insects flying. 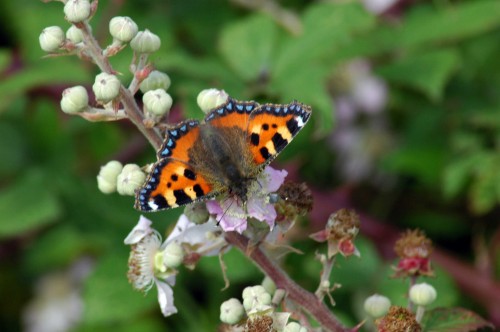 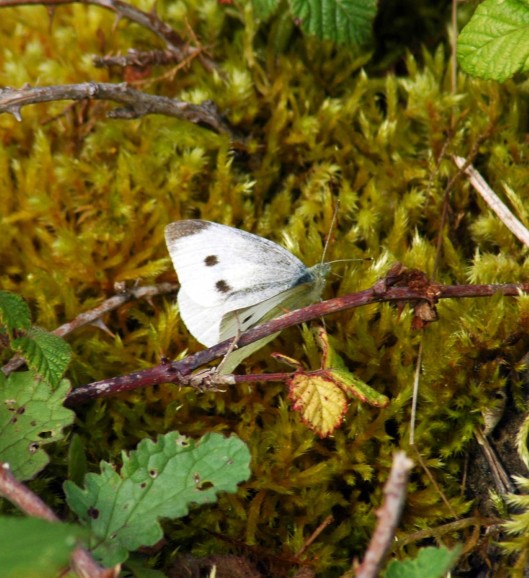 A large white (f) butterfly settled on a bramble stem very low to the ground. I love the mossy background.

Ragwort is flowering now; this somewhat contentious plant is an invaluable source of nectar for a myriad of insects and the host plant of the unmistakeable black and yellow striped larvae of the Cinnabar Moth, many plants are already supporting numbers of them.

There are some interesting plants flowering here at the moment; one is the pink-flowered Centaury and the other is Yellow-wort-Blackstonia, neither of which were showing open flowers today. 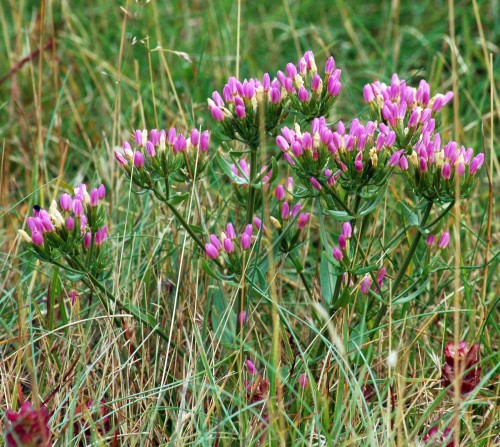 A member of the family Gentianaceae, common centaury thrives in dry grassy places and is especially common on stable sand dunes and on dune slacks.

A small plant of the gentian family, with flat-clusters of  star-shaped rose pink flowers, which open only when the sun shines. The stem is four-cornered and grows to a height of 4-20 inches (10-50 cm).

Centaury takes its name from the Greek centaur, Chiron, who was half  man, half horse. Chiron was a teacher of the gods and skilled in the uses of medicinal herbs, and legend has it that when he was shot accidentally by Hercules with a poison arrow, he healed himself using common centaury.

This is a truly versatile herb that apparently may be used for nearly any problem. It is a bitter-tasting herb, which Culpeper noted “Tis very wholesome; but not very toothsome.”  It is used for a variety of digestive problems, including colic, bloating, heartburn, dyspepsia, to stimulate appetite, ease constipation, and to aid the proper assimilation and digestion of food. An extract prepared with vodka (!) is given for high blood pressure, liver and gall bladder problems. Lotions containing centaury have been used on the skin to remove different kinds of blemishes. It is used as a treatment for muscular rheumatism, gout, convulsions, tuberculosis, cramps and snakebites.

Externally, the juice applied to the eyes will clear the vision, and applied to wounds, ulcers, old sores, bruises, will help promote healing.  It kills worms as do most bitters and a decoction externally applied will destroy lice and other parasites in the hair.

I am familiar with Centaury through my work as an Holistic therapist, having studied and extensively used the Bach Flower remedies. It was one of Dr Edward Bach’s original ’12 Healers’.

The Centaury remedy is for people who find it difficult to say ‘no’ to others, usually  kind, gentle souls who like to help that may find themselves being taken advantage of and becoming resentful. The willing servant ending up the slave of another’s wishes. The remedy doesn’t harden or make us callous,rather it supports the development of courage and self-determination. We are better able to draw a line and make space where we can be ourselves, free of the desires and commands of others. 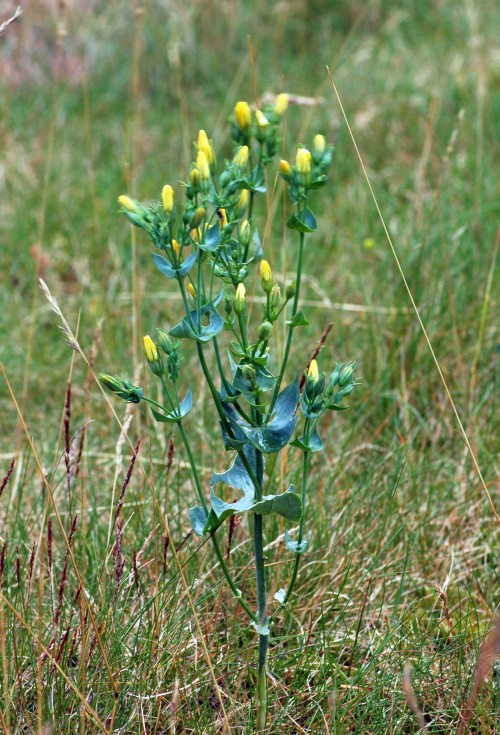 A distinctive plant with grey-green leaves arranged in pairs to form ‘cups’ up the stem and bright yellow flowers that only open in the brightest sunshine. Yellow-wort is lime-loving and in Wales occurs in the greatest numbers dunes along the northern and southern coastal strips, particularly on marshy dune slacks. It generally flowers from June to October in Britain where it is widespread but not common.

In common with the afore-mentioned Centaury, Yellow-wort is a member of the family Gentianaceae, but is distinguished from all other family members, which have flowers with either four or five petals, by having six or even eight flower petals. It is tricky to catch the flowers open as even on the brightest, sunniest days they close very quickly if as much as a cloud passes over them.

Yellow is self-explanatory as the colour of the flowers of the plant and wort was commonly used in the names of plants and herbs, especially those used formerly as food or medicinally. In this particular case I have been unable to discover any history of the plant being used medicinally, but a yellow dye can be obtained from the plant extract, so that may cover it.

The Latin Blackstonia refers to the 18th Century botanist and apothecary John Blackstone. Perfoliata.. through-leaved .. referring to the leaves which are fused together at the base with the stem threading its way through.

To find a wasp you would have to look around the new green leaf buds in late May as it prepares to lay its eggs. Then the female diplolepis lay up to sixty eggs within each leaf bud using her ovipositor. The asexual wasps emerge in the spring; less than one percent are males.

The bedeguar gall is surrounded by a dense mass of sticky branched filaments, giving the appearance of a ball of moss. Its filaments start off green, gradually becoming pink that turns crimson and ages to a reddish brown. They are at their most attractive from about now to September, as from then they begin to lose their hairs, although they remain in place until the new gall wasps emerge in the spring.  A large specimen can achieve up to 10 cm in width.

The Robin in ‘Robin’s pincushion’ refers to the woodland sprite of English folklore, Robin Goodfellow, otherwise known as Will o’ the wisp and Puck.

Folklore tells us that if a Robin’s Pincushion is placed under one’s pillow it aids sleep and the gall was therefore known as the ‘Sleep Apple’.

The galls have apparently been used in the treatment of whooping cough and carried as an amulet to ward off toothache.

4 thoughts on “August on the Little Orme”