As we surveyed the ash tree the tree surgeon arrived and quickly assessed the work involved in removing the obstruction, estimating that it would take him about two hours to clear. The rain and wind persisted, but had eased at that point, so as we had piled on waterproofs anyway, we wandered back towards the house stopping to see how the saturated wildflowers had fared.

At this time of year Red Campion-Silene dioica is a familiar sight on the banks of Welsh lanes, along the roadsides and on woodland edges. Its flowering season is quite a lengthy one, beginning in May when it accompanies bluebells and continuing on through the summer and into September. Individually, the plants are rather straggly and untidy, but beautiful en masse at the peak of  its blooming when it can colour large swathes of ground. 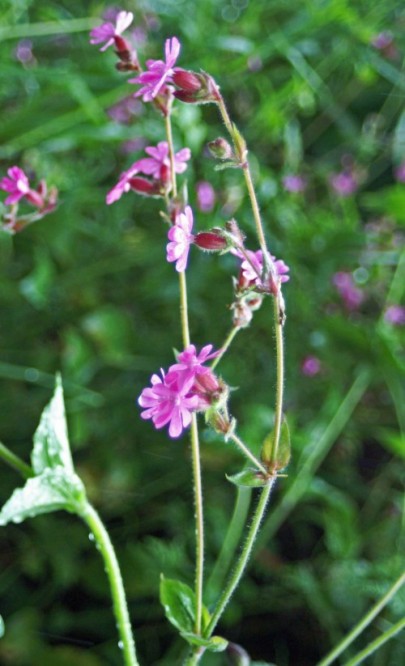 Foxgloves typify June in most parts of Wales, appearing in a wide variety of habitats from the lanes and woodlands to clifftops and mountains. This morning some of the more exposed blooms were  looking a little the worse for wear in the aftermath of their night’s battering, but even those with bent stems still managed to look graceful and elegant beaded with droplets of rain.

Foxglove bent by the wind & rain

Cow Parsley flowerheads were drenched, but the drooping buds, each adorned with a droplet of water at their tips looked so pretty, like miniature chandeliers adorned with clear crystal beads. The presence of the little slug on the flowerhead in my photograph spoils that metaphor slightly, but it was quite attractive in its own way.

Cow parsley being investigated by a small brown slug

In the hedgerow I came across a few flowering trusses of purple Woody Nightshade, or Bittersweet – Solanum dulcamara. The plant stems grow long, but are not equipped with any climbing aids such as hooks, nor do they twine, they simply leans on other plants for support. A member of the potato family, the plant’s purple flowers with yellow centres are attractive, but I grew up in fear of it, being strongly warned to stay well away from it as it was very poisonous; in fact we knew it as deadly nightshade, although that name really applies to another member of the family, Belladonna. 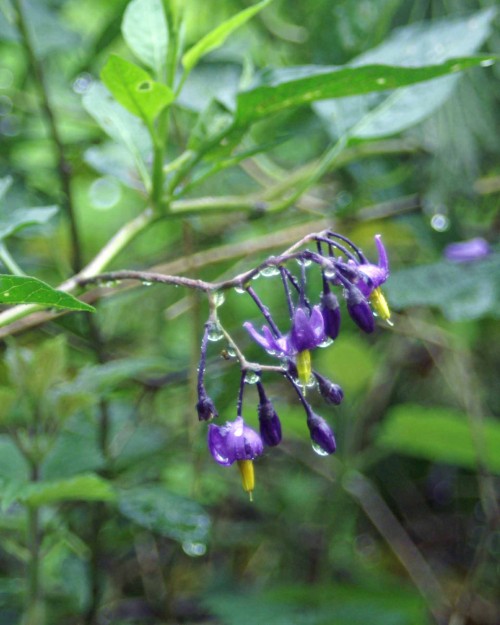 The attractive, but potentially poisonous flowers of woody nightshade, alternatively named or bittersweet

There were a surprising number of insects around, particularly flies of various kinds. I noticed quite a few of the species in the photograph below, most sitting on leaves rather than flying around and wondered if they were sucking up tiny droplets of water from their surfaces. I’m not sure what they are, but think they may be dung flies; if anyone knows I’d love to know for sure. 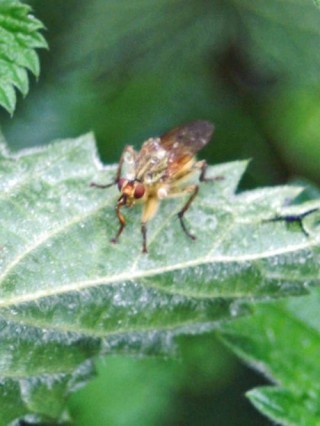 There were a lot of these flies sitting around on various leaves, this one on the reverse, or stinging side of a nettle leaf. With its proboscis extended down to the leaf’s surface, was it drinking?

The Dog Roses are spectacular this year with shrubs smothered with  pink-flushed blooms; the after-effects of their being subjected to the heavy rain will probably be apparent in a day or two’s time, but at the moment they are gorgeous. 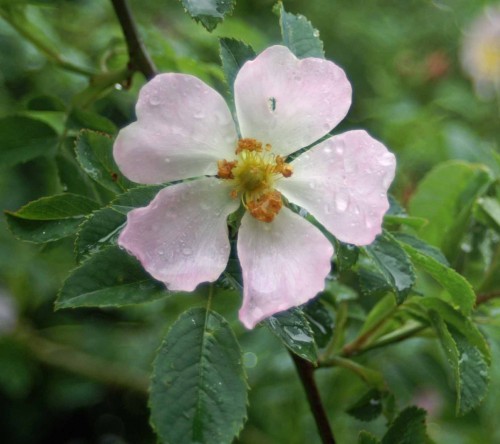 2 thoughts on “A trip to Pembrokeshire:Part 2: Flowers in the rain”