Cormorants are breeding residents here and since I arrived in July sightings of the birds flying or swimming in the sea have been consistently frequent, but in recent weeks their numbers have increased manyfold. Numbers of them now joined the ranks of oystercatchers and gulls that line the sea-edge as the tide comes in, and they can be spotted on the rocks of the harbour breakwater and perched on top of available posts. There are almost always a few to be seen on the lower reaches of the Little Orme, but now there are many, their black forms punctuating the pale limestone.

The Cormorant's flight is strong and purposeful

A large and conspicuous waterbird, the cormorant has an almost primitive look about it.Its long neck makes it appear almost reptilian, particularly when swimming with the bulk of its body submerged.

Cormorants are coastal rather than oceanic birds, and many have colonised inland waters – in fact the original ancestor of cormorants seems to have been a fresh-water bird, judging from the habitat of the most ancient lineage. They range around the world, except for the central Pacific islands.

All are fish-eaters, feeding mainly on small eels and flat fish. They dive from the surface of the water. All four toes on each foot are webbed which aids them in swimming and in pursuing fish underwater.

Cormorants are supreme fishers which can bring them into conflict with anglers and they have been persecuted in the past, although some enterprising Japanese and Chinese fishermen employ the bird’s expertise to assist them, training one species of the birds to dive and catch fish for them. 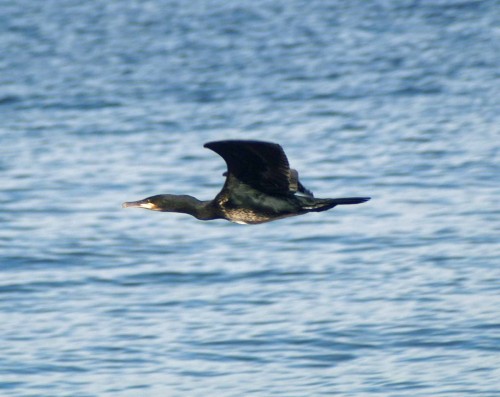 The birds are often seen standing with their wings held out to dry and the reason for that is a bit of a mystery and the focus of study. It seems strange that a bird that spends much of its time in the water should need to dry their plumage and all cormorants have preen gland secretions that are used ostensibly to keep the feathers waterproof. It has been variously stated that cormorants have waterproof feathers; they have water permeable feathers; that the outer plumage absorbs water but does not permit it to penetrate the layer of air next to the skin; that it aids thermoregulation,digestion, balances the bird or indicates presence of fish. However, a detailed study of the Great Cormorant concludes that it is without doubt to dry the plumage. (extracts from article in Wikipaedia)

Male Cormorant in his full breeding plumage, wings outstretched. This is one of my favourite Cormorant photographs, I took it in Sotogrande, Spain earlier this year (Feb).

Click on the link for more photographs of Cormorants in Spain on my blog ‘Nightingale Trails’.