Early spring is a good time to look out for some of the different species of bees found locally, catching them before they settle in to producing the next generation. On recent outings Bryn Euryn was particularly well blessed with bumblebees and some other interesting species and the Little Orme brought an unexpected treat so I thought I’d put them all together.

The Buff-tailed bumblebee- Bombus terrestris is the largest of our native bumblebees. Queens, workers and males have a dirty golden yellow collar near the head and one on the abdomen.

The queen’s tail is an off white/buff colour which can sometimes appear orange. The queens are busy establishing new colonies and may be seen collecting pollen to stock it and crawling around on the ground where they nest in burrows underground.

I didn’t spot any workers or males on the days I was out and about, if I had these would both be smaller than the queens and look slightly different as workers have a white tail and that of the males is white ringed with a buff line.

Red-tailed Bumblebee- Bombus lapidarius queens are also establishing new colonies and can be seen feeding and collecting pollen from flowers and also crawling around on the ground as they too nest underground.

Queens are distinctive with their black bodies and red tails and are large, between 20 -22mm long which is a similar length to that of the Buff-tailed bumblebee queens, but the red-tailed is less bulky. 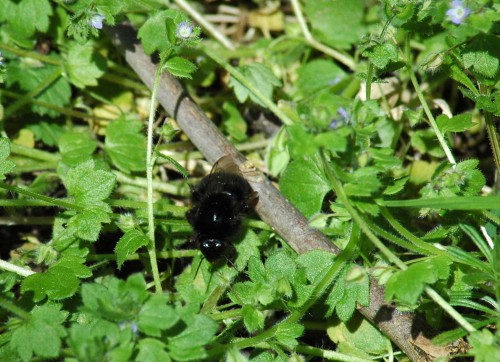 There are Red-tailed bumblebee workers about too. They have the same colouring as the queens but are smaller, varying in size from 1-16mm in length, with some early workers being no bigger than a house fly.

They have comparatively short tongues and favour flowers that provide them with a landing platform such as dandelions and daisies and later on, thistles and ragwort. In gardens they like chive flowers and lavender.

To make things confusing there is a cuckoo-bee that closely resembles the Red-tailed bumblebee. The main differences are that the cuckoo bee has black wings and the back legs are hairy and without the shiny hairless patch, the pollen basket, of the true bee.

There were a very few Common Carder bees Bombus pascuorum about and I only managed one quick shot of one visiting a dog violet flower. There will be many more later on.

An exciting new recording for me here was of the Tree Bumblebee Bombus hypnorum, that’s is not to say they weren’t here before, just that I had never seen one. I was lucky to spot two that were taking nectar from the Green Alkanet flowers which grow in a big patch next to the car-park gate.

Tree bumblebees are fairly new arrivals to the UK, first found in 2001 in Wiltshire. Since then they have spread across most of England and Wales and made it to Southern Scotland in 2013. Queens, workers and males all have a similar colour pattern; the thorax is tawny to reddish-brown, the abdomen is black and the tail is white. 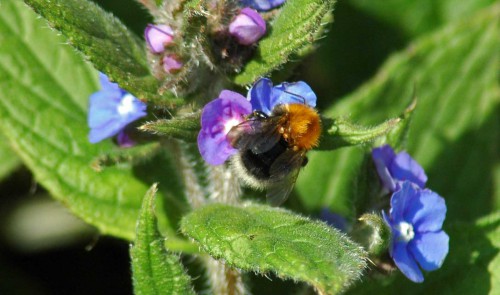 Queens vary significantly in size and can reach up to 18mm in length. Males are quite chunky and can be as much as 16mm in length; fresh males have a patch of yellowish facial hair which eventually wears off. Workers, which is what I believe I photographed range from 11-16mm in length; they move around rapidly and are effective pollinators.

Basking on the leaves of the butterbur plant that also grows near the gate at the bottom end of of the car park was another little bee. I’m not positive about its identification but based on the colour of the hairs on its thorax I think it may be an Early Mining Bee – Andrena haemorrhoa. 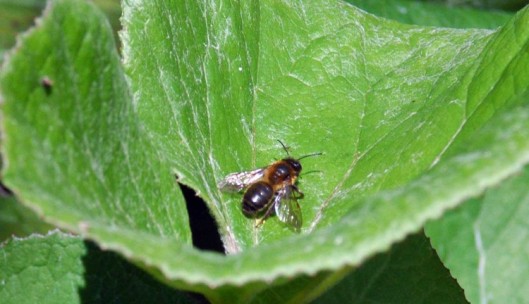 A couple of days later I was walking on the Little Orme and came across another species of mining bee that cannot be mistaken for anything else, the Tawny Mining Bee-Andrena fulva.

There were two individuals attempting to nectar on Alexander’s while a particularly strong wind was bending and tossing the flower around. It was tricky trying to get focussed images. 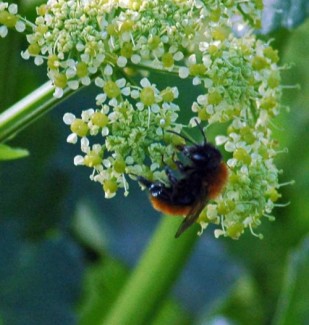 Males are 10 to 12 mm and the females 8 to 10 mm long. The females are covered with fox red hair on their backs and black on the underside, whilst the males are more slender and yellower in appearance. 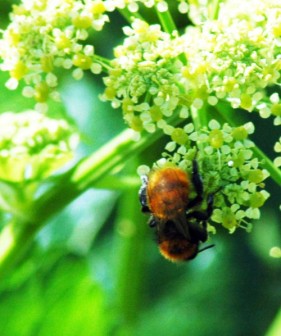 One of the two managed to hold on and kept searching over the florets, but the other gave up and dropped to the ground. 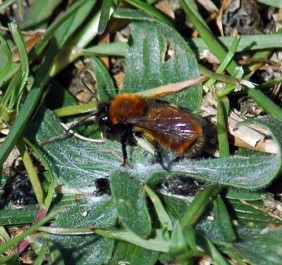 Tawny Mining Bee on the ground

The bees mate in spring, after which the male dies and the female starts to build a nest. Sometimes more than a hundred females build nests in a few square metres but the Tawny Mining Bee normally does not create a colony: each female has her own nest.

Finally I’d like to mention another little bee found locally, the Red Mason Bee Osmia rufa, also most likely to be spotted around this time of year. 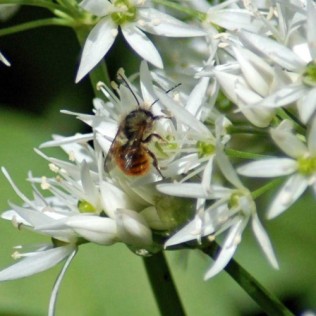 The males are smaller than the females at 6 -11 mm. Both sexes are covered in dense gingery hairs, the male with white tufts on the head while the female’s head is black. 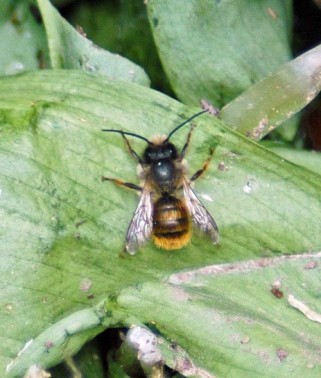 It is a solitary bee, each nest being the work of a single female bee working alone. They nest in pre-existing cavities such as hollow plant stems, old garden canes, air bricks, and even old nail holes in fence posts, lining the inside of the cavity with mud.

The soggy conditions created by the rainfall this year have not been ideal for many late summer wildflowers and, perhaps as a result of that, it seems to me that there has been a drop in some insect populations. I was on the lookout for flower beetles, in particular soldier beetles, which in  previous years have been prolific, and struggled to find many at all.

I spent a couple of hours roaming the pathways of Bryn Euryn on one sunny afternoon in mid-August, ignoring grey clouds rolling in at my peril, getting caught right at the top in a proper downpour. There is  almost always something interesting to photograph here whatever the weather though, and these are my offerings for that day.

There were very few plants still flowering on the lower field edge, but the first one, the Great Willowherb, often mistaken for Rosebay Willowherb, is one I’ve wanted to mention for a while and will do at greater length soon. 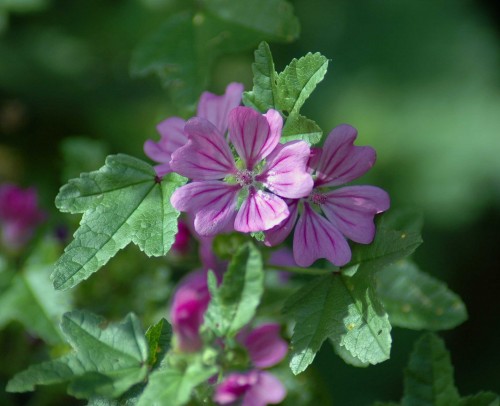 banded Snail on a bindweed leaf 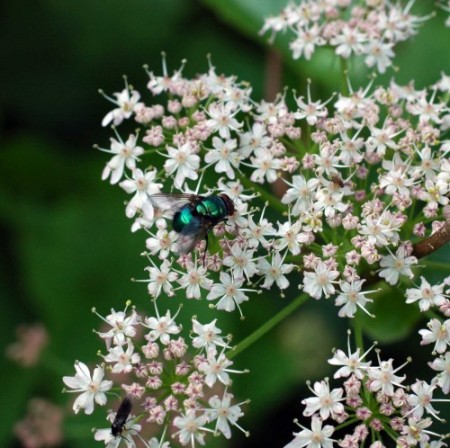 Most of the hogweed plants are setting seed

In the clearing at the top of the steps that cut through the lower woodland is a bramble patch that always seems to attract an array of nectar-seeking insects. Today there were a good number of hoverflies, most the one photographed below, but there were a few other Eristalis species too.

This attractive hoverfly is Helophilus pendulus, common names are Sun Fly as it does enjoy basking in sunny patches, and The Footballer referring to its colours and stripy patterning

I headed a bit round to the open grassy area that this time last year was covered in purple flowered knapweed and buzzing with dozens of insects,  but now was looking quite bedraggled and bereft of colourful blooms. There was some knapweed, but hardly enough to go around apparently as most of the flowers had more than one bumblebee or hoverfly competing for its bounty. 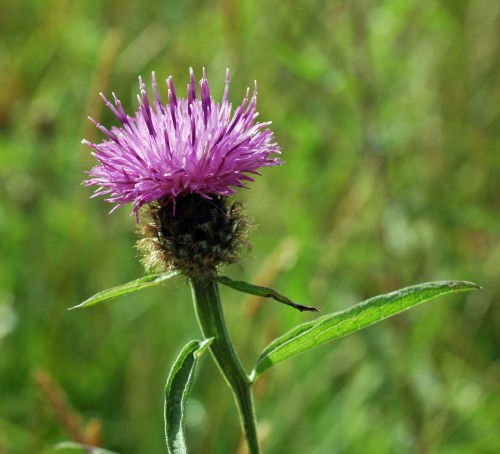 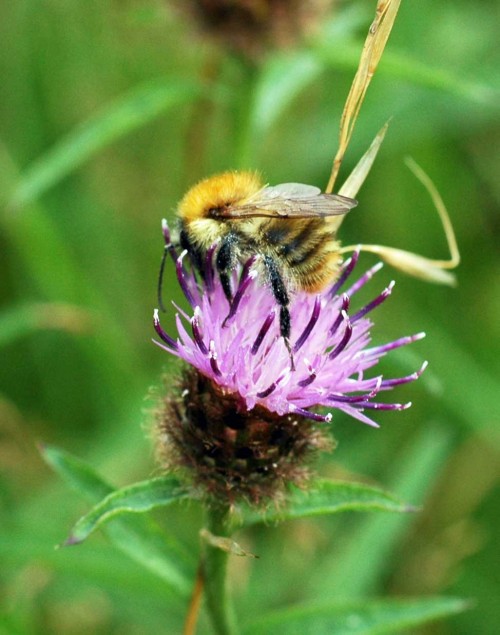 In amongst the long damp grass was a pink flower that I recognised from last year but didn’t get around to identifying. This (I believe/hope) is an unusual plant of the allium family, common name Nodding Wild Onion or Allium. The pink bell-shaped flowers are  tiny and have protruding stamens; very pretty.

A closer look at the pretty little flowers

There were a few plants of Agrimony – Agrimoniia eupatoria

The other staple of late summer nectar, Ragwort, is also flowering of course. I can’t not include it here, so thought I’d just put in a close-up of an individual flower to show how pretty they really are.

Close up of Ragwort flowers

One flowering plant that is relishing the damp conditions and flowering prolifically here was Hemp Agrimony. Its flat, open flowers are very attractive to insects; great for butterflies.

There were a few butterflies about, but as the clouds came over and the air cooled those that were out and about were not very mobile. Meadow Browns were most numerous but most were fluttering about low down in the long grass. I spotted one on Hemp Agrimony, also a single Gatekeeper and was taken by surprise when a Peacock (butterfly!) flew right in front of my face. I did photograph them all, but by now it was minutes away from the onset of the downpour and quite dark, so the resulting images are a bit grainy, but there for the record.

Tiny acorns are beginning to show on the oak trees 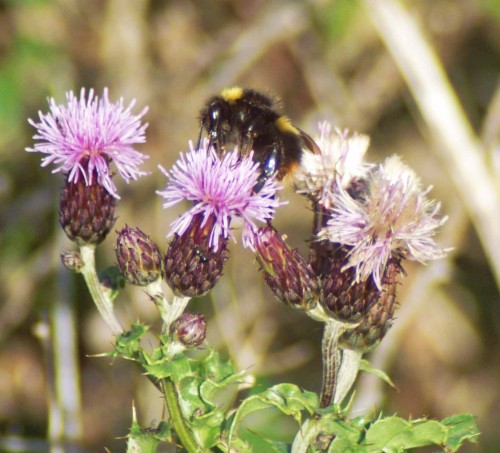 The weather throughout August has been unsettled and changeable. Rainy and sometimes windy days have curtailed outdoor activities, but when there have been dry spells and even occasional warm sunny ones, beautiful cloud formations have added an extra dimension to the views of sea and land.

A breezy but sunny afternoon:

Catching crabs,( or ‘crabbing), is a popular form of entertainment in this part of the world. The only equipment required are a length of line with a hook to hold the bait, which is often a small piece of bacon and a bucket full of water to hold your catch – specially marked buckets are sold locally. When you’ve caught enough crabs to make you happy, you  simply return them all to their rightful home unharmed, where they can continue to grow. I’m sure there are many canny crabs lining up for an easy meal. 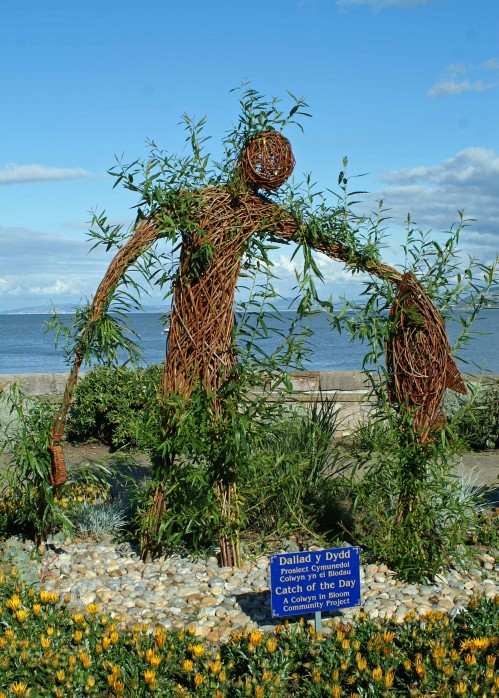 9/8/11-On the village part of the promenade a clever woven wicker sculpture, crafted from live willow, of a person holding a fish

A warm evening just before sunset: 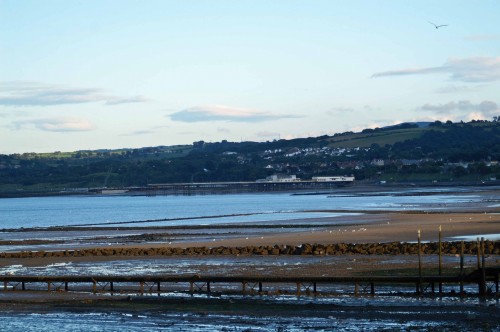 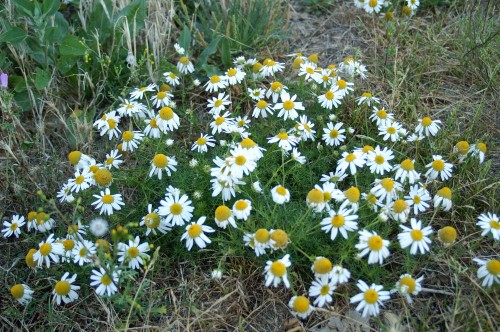 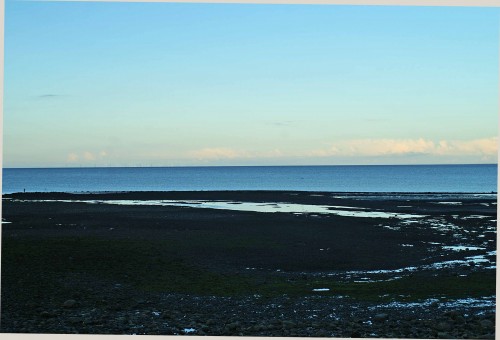