The soggy conditions created by the rainfall this year have not been ideal for many late summer wildflowers and, perhaps as a result of that, it seems to me that there has been a drop in some insect populations. I was on the lookout for flower beetles, in particular soldier beetles, which in  previous years have been prolific, and struggled to find many at all.

I spent a couple of hours roaming the pathways of Bryn Euryn on one sunny afternoon in mid-August, ignoring grey clouds rolling in at my peril, getting caught right at the top in a proper downpour. There is  almost always something interesting to photograph here whatever the weather though, and these are my offerings for that day.

There were very few plants still flowering on the lower field edge, but the first one, the Great Willowherb, often mistaken for Rosebay Willowherb, is one I’ve wanted to mention for a while and will do at greater length soon.

banded Snail on a bindweed leaf 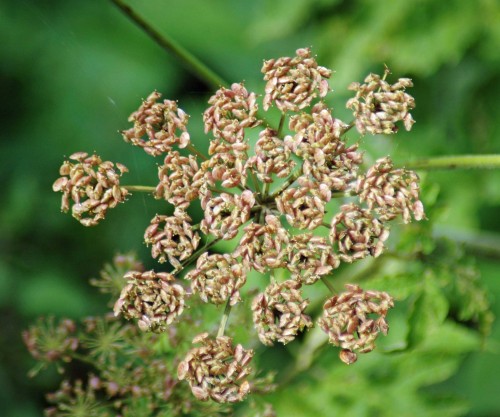 Most of the hogweed plants are setting seed

In the clearing at the top of the steps that cut through the lower woodland is a bramble patch that always seems to attract an array of nectar-seeking insects. Today there were a good number of hoverflies, most the one photographed below, but there were a few other Eristalis species too.

This attractive hoverfly is Helophilus pendulus, common names are Sun Fly as it does enjoy basking in sunny patches, and The Footballer referring to its colours and stripy patterning

I headed a bit round to the open grassy area that this time last year was covered in purple flowered knapweed and buzzing with dozens of insects,  but now was looking quite bedraggled and bereft of colourful blooms. There was some knapweed, but hardly enough to go around apparently as most of the flowers had more than one bumblebee or hoverfly competing for its bounty.

In amongst the long damp grass was a pink flower that I recognised from last year but didn’t get around to identifying. This (I believe/hope) is an unusual plant of the allium family, common name Nodding Wild Onion or Allium. The pink bell-shaped flowers are  tiny and have protruding stamens; very pretty.

A closer look at the pretty little flowers

There were a few plants of Agrimony – Agrimoniia eupatoria

The other staple of late summer nectar, Ragwort, is also flowering of course. I can’t not include it here, so thought I’d just put in a close-up of an individual flower to show how pretty they really are.

Close up of Ragwort flowers

One flowering plant that is relishing the damp conditions and flowering prolifically here was Hemp Agrimony. Its flat, open flowers are very attractive to insects; great for butterflies.

There were a few butterflies about, but as the clouds came over and the air cooled those that were out and about were not very mobile. Meadow Browns were most numerous but most were fluttering about low down in the long grass. I spotted one on Hemp Agrimony, also a single Gatekeeper and was taken by surprise when a Peacock (butterfly!) flew right in front of my face. I did photograph them all, but by now it was minutes away from the onset of the downpour and quite dark, so the resulting images are a bit grainy, but there for the record. 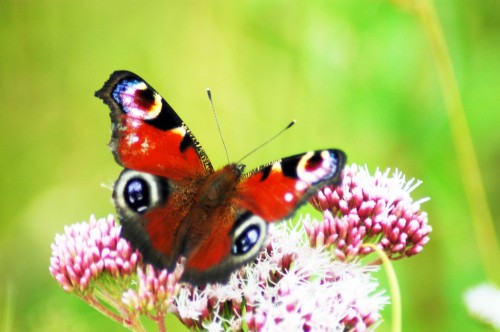 Tiny acorns are beginning to show on the oak trees