Memories of childhood wanderings were brought back vividly the weekend before last as my sisters, niece and little great-niece headed out on a sloe-and-blackberry foraging foray around the old Polebrook Airfield in east Northamptonshire. Once a flat, open site used for agriculture, the site was commissioned for use by the RAF and then used by the US Airforce as a base for bomber aircraft during World War II. After the war ended it was decommissioned by the Air Ministry and sold back to the adjacent Ashton Estate. Most of the buildings were removed from the site’s surface, but below ground many concrete shelters and chambers remained, rendering it unfeasible to restore it back to use as agricultural land. The woodland of Ashton Wold was already a Private Nature Reserve and separated from the old Airfield only by a narrow country road, so their owner took the opportunity to leave it alone as a protective buffer zone between the Nature Reserve and the surrounding farmed land, interested to see what happened when nature was allowed to venture back in. 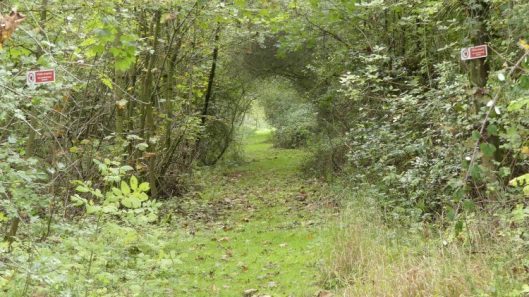 Way back in the mid to late 60s we lived at Ashton Wold and in my early double-figure days, I spent hours wandering around the woods and fields and sometimes ventured over to the Airfield. Then it was unfenced, easily accessed and without the warning signs that might pepper such a place nowadays. It was doubtless a potentially hazardous place for people, strewn with all kinds of crumbling, part-demolished buildings and underground shelters half-hidden by long grass and brambles. There was always the sense that you shouldn’t really be there, which of course added to its appeal. At that time I had no real idea about the site’s history or plans for its future. But I did know that in the Spring I could find Great-Crested Newts swimming in what I thought of as water-filled ‘tanks’, probably old concrete foundations or something similar, then later Lapwings (or Peewits as we knew them) nested here; hunting for their hidden ground-level nests is how I learned that the parent bird would sometimes feign an injury to try to draw you away from a nest. There were wildflowers too and I’m sure a great deal that passed me by in this burgeoning sanctuary.

The site now is almost, but to us, never completely unrecognisable. Part of the site is used by a Warehousing Company, part is once more farmed and most importantly the Northern edge of the site is now also designated as a Private Nature Reserve. A Bioblitz there, carried out by the Northamptonshire Biodiversity Records Centre in August 2015, resulted in an impressive species count that included 40 species that have a notable or protected status at National level, including 17 birds, 2 bats, 7 moths, 3 butterflies, 1 amphibian, 9 lichens and 1 moss species.

Today we were there to gather sloes and blackberries, but needless to say, even now on a cool, damp and intermittently sunny Autumn day, there was so much more to see it was impossible to keep focussed.

Wide mown grass paths now crisscross areas of Hawthorn and Blackthorn scrub bound up with tangles of brambles and wild rose briars that are interspersed with rough grassland. 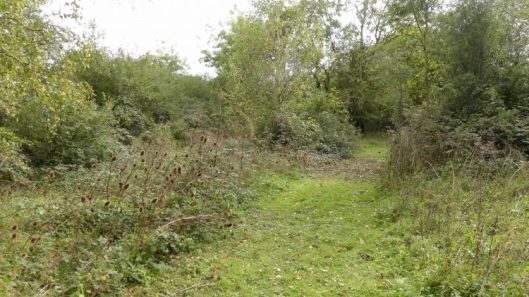 There were always Teasels here and it’s good to see them thriving still. It’s a native plant and an important source of summer nectar and pollen for insects – Bumblebees love the flowers and then in the autumn the distinctive prickly dried heads hold seed that is sought by birds, particularly Goldfinches.

Amongst the large patches of rough scrubby grass there were still a few flowers to be found, a sprinkle of purple thistles and a few plants of Common Centaury. The latter plant only fully opens its flowers in the sun, which was only intermittently shining on us, so I didn’t get to see them out unfortunately.

There are lengths of old concrete aircraft runways or service roads still in place, but now colonised by moss enriched by decomposed fallen leaves, they are concealed beneath a growing medium sufficiently deep for plants adapted to dry conditions to establish. In one such place we came across a spreading colony of Great Mullein, whose thick silver-grey felted leaves are perfectly adapted to potentially dry conditions. 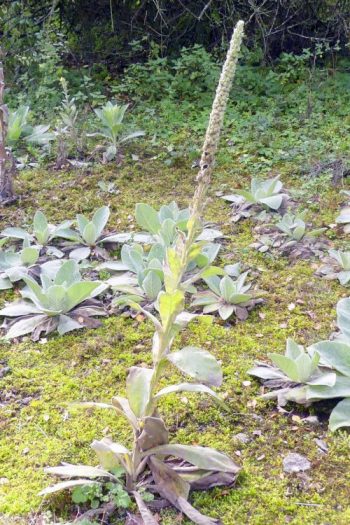 One plant stood out from the crowd as it had produced the most enormous leaves I’ve ever seen on this species. it was amazing and must have sprung from a seed that had fallen in an especially fertile spot. 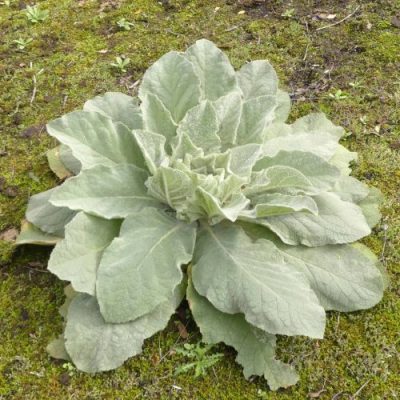 It’s downy leaves, additionally warmed by sunshine were attracting insects too and must have made a cosy place for these Spotted Craneflies to couple-up. 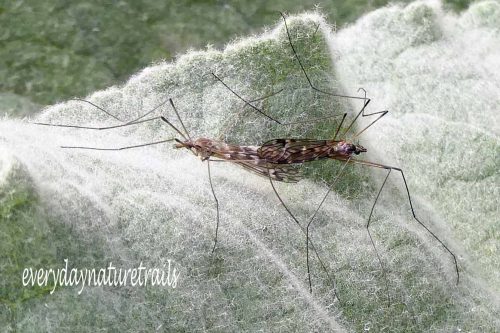 Flies paused to rest there too; I managed to catch a bright shiny Bluebottle and a golden-brown, or officially Orange Muscid Fly basking in a spell of warm sunshine. 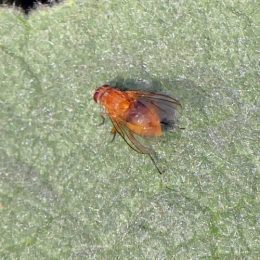 Some Blackthorn looks old, and has grown into small spreading trees. Their brittle branches and tangles of twigs are mostly leafless and bear sparse fruits, but they are encrusted beautifully with lichen.

We wandered through the maturing woodland where the trees are mainly Ash and Oak with some Silver Birch. The ground beneath the trees is strewn only with fallen branches; it may be kept clear as there are numerous deep rectangular holes, their covers moved to the side and covered with moss. Quite hazardous if you don’t watch where you’re going. There are still intact brick and concrete-built shelters here too, their roofs are now camouflaged by vegetation, but the entrances are clear and accessible and it would seem watertight.

On a moss-covered fallen log, tiny mushrooms with pretty mauve caps were growing. I tried to persuade my 3 year old great-niece that they were stools for fairies or pixies, but she didn’t believe me! She just wanted to walk along the log! I don’t know the name, but have been advised it’s probably a species of Marasmius, commonly known as ‘parachute mushrooms’ because of the ribbed and domed shape of their caps. 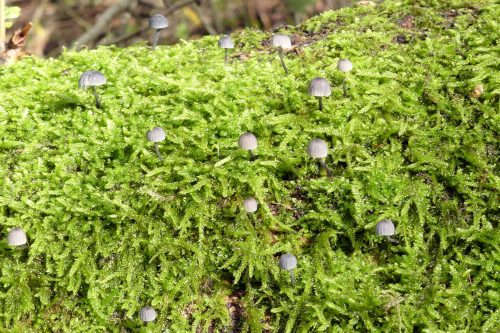 We headed out of the woods and back onto safer ground to resume our berry hunt. Many were tantalising beyond our reach, like these that hung high above a twining rope of heavily-berried Black Bryony.

Beyond us, but all the better for small birds like this Blue Tit – one of a party that were travelling around, keeping up a companionable dialogue of contact as they foraged. 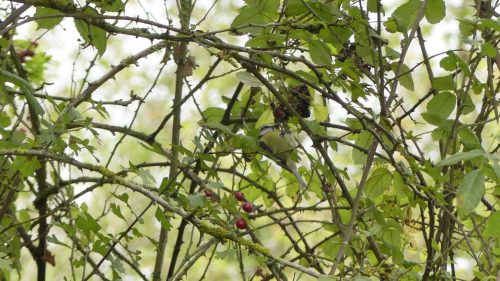 We passed by a huge spread of Knapweed, entirely gone to seed now, but it must have been a lovely sight back in the late summer. 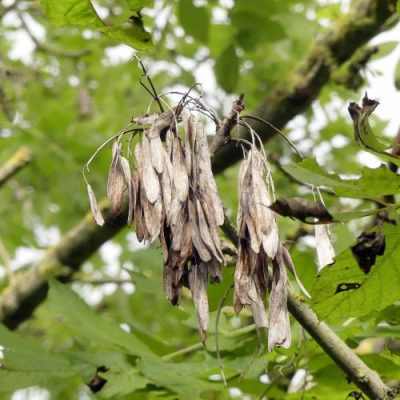 Intriguingly a small iron-framed wooden bench seat has been set beneath an oak tree.

A rather beautiful yellow-green spider was finding the sun-warmed metal much to its liking. My picture isn’t great, but I think it may be a Green Huntsman Spider.

We reached the high dense Blackthorn hedge that forms an effective boundary with the road. There were sloes to be found here, but there distribution was a bit erratic; some bushes had a lot, many had few or even none at all. 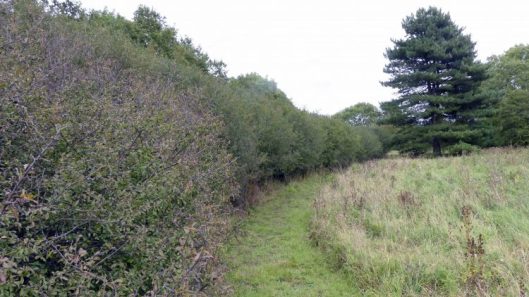 A wild rose using the hedge for support is decorated with ferny-mossy Robin’s Pincushions, also known as the Bedeguar Gall. The familiar fibrous growths are the plant’s reaction to being chosen to host the larvae of a tiny gall wasp, Dipoloepis rosae.

Heading back I found clumps of aromatic Wild Basil in the long grass; this plant is a member of the Deadnettle family

and a little later I came across a close relative, a nice patch of White Deadnettle, whose leaves remind me of stinging nettles.

A lovely family wander which brought back happy memories for my sisters and me that I hope may be recalled and even better, relived by our children and grandchildren in another fifty years!

9 thoughts on “Sloe Picking down a Memory Lane”