The Little Orme was physically scarred and shaped by human demands and quarrying activities during the first half of the last century. Subsequently handed back to nature and a testiment to its incredible ability to regenerate, an interlocking patchwork of habitats packed into a compact space on varying levels have become a haven for a diversity of wildlife, particularly wildflowers, birds and insects. Now in part a Local Nature Reserve with areas set aside as SSSIs, its wildlife may again be under pressure as the headland is an increasingly popular recreational area for local people and visitors and is also crossed by walkers following the Wales Coastal Path or the North Wales Coast Path.

I was here today with the intention of taking some photographs of the Cormorant colony in mind. The birds are well into their breeding season now and have well-grown offspring in their nests and I wanted to catch them there before they fledged. I thought I was focussed on the job in hand, but as anyone that has ever been out walking with me would have guessed, it took less than two minutes for me to be distracted from my mission; firstly by a Harlequin ladybird guzzling aphids on the going-to-seed Alexanders, then by a lovely shiny metallic green female Swollen-thighed Beetle – Oedemera nobilis, who confusingly doesn’t have Swollen thighs at all, it’s the males that sport them as emblems of their maleness, the thicker the better in their bid to secure mates. She was perfectly displayed in the cup of a perfect dog rose, like a little jewel.

The cliff path along to Angel Bay took a while to negotiate too. Its sea edge is lined with masses of Red Valerian in all of its shades from deep carmine through pinks to white and it looks lovely. 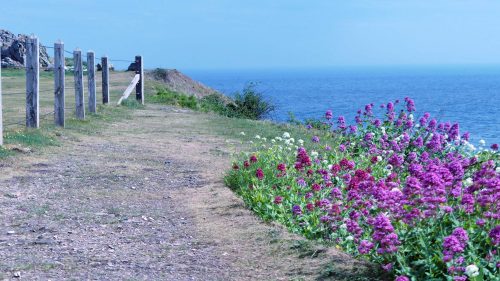 I know it’s not a native and crops up anywhere and everywhere, but here it doesn’t look out of place and it is great for insects like the Painted Lady I found nectaring there.

There are native wildflowers on this cliff edge too, including some good sized patches of Wild Thyme and the pretty pale lemon-yellow Mouse-ear which has colonised a large patch of the crumbly downslope of the cliff.

There’s a lot of Horsetail here too, I’m not sure of the species. It also cascades down the cliff where it looks a bit like a new plantation of tiny Christmas trees. A bit further in from the edge was a large patch of what I thought was Ground Ivy, but am now not sure about; very short-stemmed here on the dry exposed cliff and a mass of purple flowers, I will go back and check. 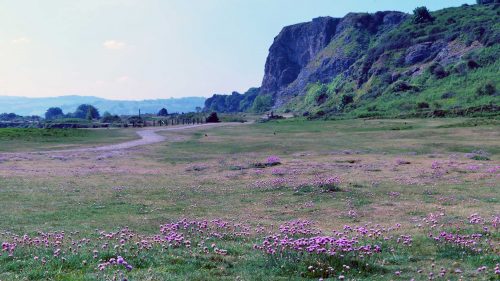 The Little Orme is the place to visit if you love your Corvids as I do. Ravens, Crows, Magpies, Jackdaws and occasionally Chough are all here. Seeing or even hearing ravens early on in a visit here always sets the mood for me, reminding me that despite the fact that this is now a place much used for recreation by people and their pets, it is still clinging on as a wild habitat. A pair flew overhead, ‘gronking’ as they did so and landed high up on the edge of the cliff, in the centre of the image above, one of their habitual lookouts for surveying their Kingdom.

Next a Magpie caught my attention as it landed on a bramble patch on the cliff edge, leaving quickly with an insect in its beak.

Then Jackdaws, great numbers of them nest in close colonies on the quarried-out cliff faces. Once breeding is over they disperse during the day, although plenty stay and forage around the grassy clifftops and it’s a safe haven to head back to and roost at night.

At the sea end of this first flat level there’s a little bit of original rock remaining, separating Angel Bay from Penrhyn Bay and forming one side of the little cove that is the haven of the Grey Seals often mentioned in my posts. The sea-facing ledge behind said rock can be a good place to look out for birds at sea, especially in the autumn and winter, but today it was bees I found there. I have to admit I thought they were wasps as there were several that were flying around, and once or twice, in and out of holes made by mining bees. A quick check with the wise ones at BWARS (Bee,Wasp & Ant Recording Society) though, told me they are nomad bees, Nomada goodeniana, that seek out other bee’s nests in which to lay their eggs. They are apparently quite a common species, but a first for me. 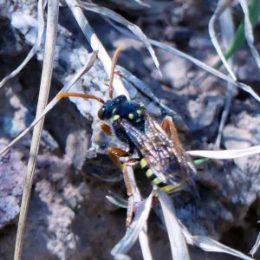 A local speciality (botanically that is, not on menus!), Wild cabbage grows here, there have been bluebells on the cliff slopes and I spotted the bees as I stopped to photograph a pretty Bloody Cranesbill flower. 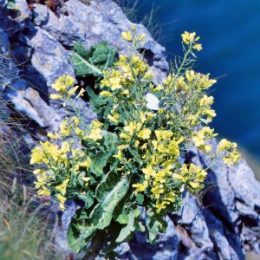 Looking out over the cove, there were just a couple of seals in the water and a sizeable gang of cormorants perched up at the sea end of the headland.

The sight of those Cormorants spurred me on to get back on track towards their nesting site. But first a stop to admire the Thrift, perhaps my favourite coastal wildflower which despite all the hazards is thriving here. 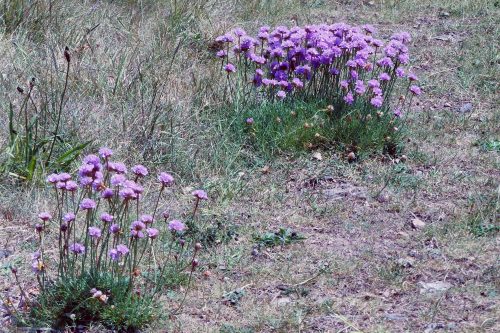 I am finally almost at the bottom of the steep slope up to the next level of the old quarry. I was following the sound of a Whitethroat singing when from close by a black bird took off and flew away from me back in the direction of the site entrance. Something in its gis made me watch carefully to see where it would land; its upturned wingtips showed this wasn’t a crow or a jackdaw and then that distinctive call confirmed I was chasing a Chough.

It landed a short distance away and set about digging in the short turfy ground in pursuit of food with its long curved bill. It was a ringed bird, banded on both legs, but perhaps not quite an adult as its beak was a dark orange colour rather than the bright red of a mature adult.

Chough eat worms, caterpillars, ants and are particularly partial to the larvae of dung beetles 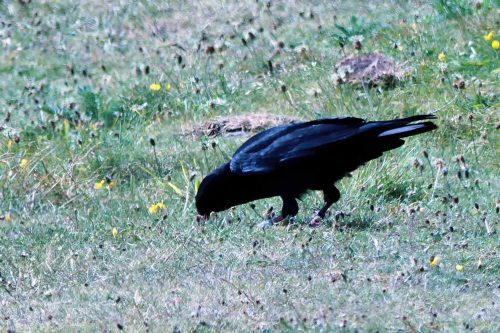 The bird had picked a productive spot and was so settled into its feeding it took no notice of me sitting watching it from a conveniently sited bench. But foraging close to the junction of two of the main tracks across the clifftop it was inevitable that it would be disturbed sooner rather than later, and so it was, taking off and flying off over the sea and around the headland. That was definitely my best ever Chough encounter here in North Wales; certainly the closest. And I would have missed it if it wasn’t for my slow- walking meandering habit.

Next Level of this trail to follow shortly…. there will be Cormorants!