In the late afternoon sunshine a number of little bees were zooming around in a corner of the front garden, pausing frequently but briefly on the warmed surfaces of ivy leaves. I have seen similar ones here each spring for the last five years, so was pretty sure they were male Tawny Mining Bees, but I had to wait a while for a prettier and more distintinctive female to take a breather from her nest-building labours to be sure. Males significantly outnumbered females here this afternoon, probably because they don’t contribute in any way to constructing nests or to raising offspring, so once mating is accomplished by a lucky few, they are free agents. 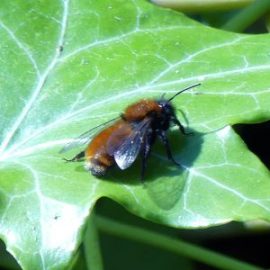 The rich fox-brown colour and furry coat of the lovely little Tawny Mining-bee (Andrena fulva) makes it the most distinctive and obvious of all the Spring-flying solitary bee species.  It is a common bee in much of England and Wales, which nests underground and leaves a little volcano-like mound of soil around the mouth of its burrow. Nests can often be seen in lawns and flowerbeds in gardens and parks, or in mown banks and field margins in farmland and orchards.

The Tawny Mining Bee is a small rich gingery-orange coloured bee that can often be seen visiting its nest in grassy areas such as lawns during the springtime.

Females are larger than males and covered in a dense layer of fox-red/orange hairs. Their underside is black. 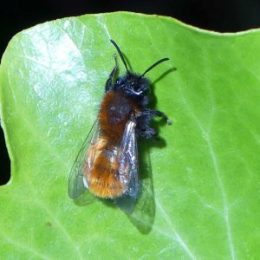 The males are quite different to the females. They are much slimmer, covered in less dense orangey brown hair and have a distinguishing pronounced moustache-like tuft of white hairs on the lower face. They play no part in nest building or providing for their offspring.

When to see it

The bee has a single flight period each year and is on the wing from early April until early June; the males emerging well before the females.

Peak activity coincides with the flowering periods of fruit trees such as Pear, Cherry and Apple and also of fruiting shrubs such as currants, gooseberries and other Ribes species and are important pollinators. The female collects pollen and nectar for the larvae which develop underground, each in a single ‘cell’ of the nest, and hibernate as pupae over winter.

The bee is common in gardens, parks, calcareous grassland, orchards and on the edges of cropped agricultural land.

Andrena fulva nests are constructed in the ground, and the nest entrances are surrounded by a volcano-like mound of excavated spoil. Nests are often in loose aggregations in tended lawns, flower beds, mown banks and in sparsely vegetated field margins. Pollen is collected from a wide range of plants including flowering trees and shrubs, weeds and garden species.

Having hibernated through the Winter, Tawny Mining Bees emerge in Spring as adults; the males emerging well before the females. After mating, the female seeks a place to make a nest. The bees’ tunnelling throws up small heaps of waste soil, that look like tiny molehills or volcanos with the entrance/exit hole at its summit. You may notice these little heaps in your lawn without associating them with the bees. They won’t spoil your lawn! The nests are short lived and do not damage plants or harm earthworms. 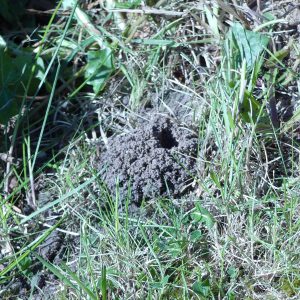 Nests will often consist of one small, main tunnel, with perhaps 5 or so branches, each containing an egg cell. The nest is a vertical shaft 200 to 300 mm (8 to 12 in) with several brood cells branching off it. The female fills these cells with a mixture of nectar and pollen, on which she lays one egg in each cell. The larva hatches within a few days, grows quickly and pupates within a few weeks to repeat the cycle as new adults emerging the following spring after hibernation.

Sometimes more than a hundred females build nests in a few square metres but the Tawny Mining Bee normally does not create a colony: each female has her own nest.

According to BWARS, the Tawny Mining Bee is common across most of England and Wales, there is only a single confirmed Scottish record, and only old, tantalizing records from Co. Kilkenny in Ireland. On continental Europe, the species is widespread and common from Britain eastwards across central Europe. It is not found in Scandinavia and is restricted in the Mediterranean region.

Checking up on the Tawny Mining Bees today I noticed a number of the diagnostic little ‘volcanos’ have appeared in the bare line of earth between the lawn edge and the ivy-covered front wall.

I spotted females going in a few times and there are still males hanging around close to the nest sites. I photographed one female as she had emerged from her nest, her legs, head and furry body coated with a layer of dusty earth.

As this garden is having a bit of an overhaul at the moment, there are very few flowering plants for the bees to nectar on, so they are having to seek food elsewhere. Poor things must be worn out, all that digging, producing eggs and having to fly across the road to find food.

An Enemy in the Camp 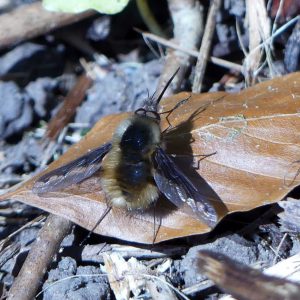 The bees carried on industriously, seemingly unaware they were being watched by a potential murderer of their offspring. The sinister character, a Bee-mimic, looks a little strange; it has a long rigid proboscis at the front of its head which it uses to tke nectar from flowers while hovering over them and long trailing legs. They are also quite cute, furry, lovely to see and entertaining to watch – this was a Bee-fly Bombylius major.

Bombylius major has several host species, including beetle larvae and the brood of solitary wasps and bees particularly digging bees such as Andrena, like our Tawny Mining Bees. 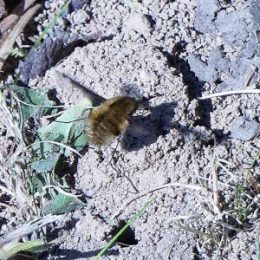 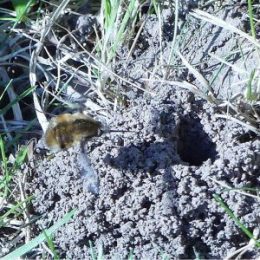 The Bee-flies mimic bees to allow them to get close to the bees nest entrance. When close enough, the female will flick her eggs into or near the nests of the host insects. The larvae will then hatch in the nest and feed on the food stored, as well as on the young solitary bees or wasps.

I knew this is how Bee-flies behaved, but hadn’t witnessed their egg-flicking behaviour before today. I have to admit it is fascinating, while feeling a bit sad about the possible outcome for some of the poor hard-working Miners. But then I like to see the Bee-flies too…..