The walk around Conwy town and its wonderfully preserved town walls is one of my all-time favourite trails, particularly on a clear sunny day; the views over the town, the estuary and the surrounding countryside are spectacular, whatever the season. There are many ways to enjoy this iconic town, but on this Trail I’m hoping to give a different perspective through the lifestyle of one of our most familiar everyday birds, the jackdaw, which have a special status here.

The ramparts of Conwy’s iconic medieval castle and the walls that enclose the town have been home to countless generations of jackdaws since its construction during the 14th century, and the birds are an integral part of the town’s everyday nature and it’s culture. People born within the town walls can claim to be a Jackdaw, although their numbers are declining today as most of those that qualify for the title have reached their 80s and 90s, and the majority of babies are now born in hospitals outside the town.

Jackdaws are the smallest members of the crow family and familiar residents of most parts of Britain, with their presence and numbers being largely influenced by the availability of  locally suitable nest sites. They  nest naturally in places such as cavities in trees and on cliffs, but the greatest number choose to live alongside us, taking advantage of habitats we have created, including the exposed rocky walls of quarries, ruined and occupied buildings and, since the advent of central heating, in chimneypots. Historically, they are also well-known for nesting in church steeples, as noted in the first verse of ‘The Jackdaw’, by the 18th century English poet William Cowper (1731-1800):

In Welsh folklore, this particular nesting trait led to the bird being considered sacred and evidently being shunned by the Devil as he ‘hates the church and everything belonging to it’.

There are several options for parking in and around the town, but having driven here and because of the route I had in mind for my trail, I began this one from the Gyffin Road carpark, which is ‘Pay & Display’ and located a short way beyond the town walls off Mill Hill (LL32 8NN). A first encounter with jackdaws is very likely to here, as ever-opportunistic there are often a few strutting around the carpark on the look out for treats.

A brightly-painted subway leads from the carpark to the town and amongst other depictions of aspects of the town and its surrounds is a Jackdaw, Jac y Dô in Welsh, and above it the first verse of a ‘nonsense’ rhyme, still traditionally sung by children, including mine many years ago. 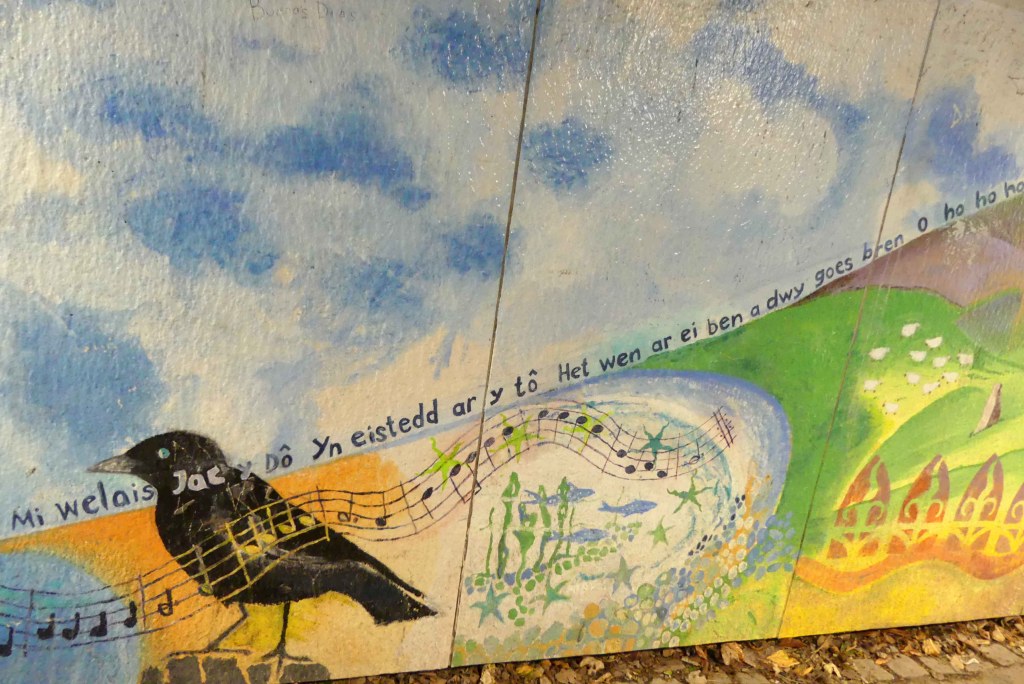 It so happens that it’s one of the few that I remember the words and tune to, so every time I pass this I have it stuck in my head for the rest of the day! In Welsh it scans nicely and goes:

In case you were wondering, it doesn’t translate well into English. The words don’t rhyme and don’t fit the tune at all!

Leaving the subway there are two options to get up to town level, either via two flights of fairly shallow stone steps or a zig-zagged slope. At the top is a stone archway between two towers of the town walls and in my picture you can just make out a tiny bird perched on the spotlight in the ‘window’ of the left-hand tower, which close to is an actual jackdaw.

The other side of the archway one of the access points to the town walls is found. Above the archway you can see a square hole in the stonework, one of many peppering the castle and town walls. These recesses, thought likely to have supported scaffolding as the castle was being built, account largely for the jackdaws’ presence here. They make perfect nesting places, snugly recessed within high sheer walls and safe from predators.

In front of you is one of the afore-mentioned town signposts topped with a jackdaw icon, the town’s unofficial mascot. Close by is the visitor centre & art gallery and across the road St Mary’s Church.

On Castle Street, on top of the gables of number 11 you are sure to see jackdaws, as forged from iron they can’t move far! The building bears the date 1539, but has origins in the mid-15th Century. It has undergone many changes of use since then: in the 18th century it became an inn, called the Black Lion, and is now a private house. The jackdaws are a 20th addition by a previous owner of the house; perhaps they commissioned them as they had been born within the walls and this was their way of stating their birthright? They are very convincing.

In the town’s Guildhall on Rose Hill Street, there is a Jackdaw chair on display, a large wooden chair that bears the town crest and a jackdaw. Apparently the chair was once housed in the Castle Hotel and legend has it that whoever sat in it had to buy a round of drinks. It’s not clear how or why, but the chair left the premises and came to light when put up for sale in an auction in the south of England. It was bought by the Jackdaw Society who gifted it back to the town. (The Guildhall was closed on this visit, due to Covid restrictions, so the photograph is from the History Points website.)

A few real birds were hanging out around the rooftops and archway leading to the harbour. They may have been foraging for insects hiding in the stone crevices as well as keeping an opportunistic eye out for any dropped food scraps. At this time of year there are less visitors and less gulls, so less competition for the smaller jackdaws.

To access the town walls from here, I went through the archway to the harbour, a slightly convoluted way to get to the wall access I was heading for, but much more scenic. At the far left-hand end of the harbour I walked through the arch and then left up the hill to where a Postern Gate is located. The gate is double-arched, one over the road, where Town Ditch Road curves into Berry Street, which leads into Castle Street and the smaller one for pedestrians, behind which are steps giving access to the walls.

This is the longest continuous length of the wall and is on a fairly steep slope in sections marked by towers leading up to the Watchtower.

From here on the views are pretty spectacular. The photograph below shows on the left-hand side the harbour and beyond it the volcano-shaped hill called the Vardre. On the nearside is part of the Bodlondeb woodland, in glorious autumn colour, around which curves the Wales Coast Path leading towards Bangor via Penmaenmawr and Llanfairfechan.

On the right-hand side you can look down on Lower Ditch Road and across it to Bodlondeb Park and the railway line where it emerges from Conwy tunnel heading to Holyhead.

On the wall of the road-bridge is a plaque which commemorates the commencement of the railway in 1845 and Robert Stephenson the famous engineer largely responsible for its construction.

A little further along is the much more recently constructed Culture Centre with more lovely trees surroundingit.

Jackdaws don’t have sole tenancy of the walls, especially outside their breeding season. The shadow reaching towards the building is cast from one of the towers that punctuate the wall and this particular one has been taken over by pigeons, two almost completely white ones and at least three pairs of the more conventionally coloured ones. They were clearly in the throws of nesting (pigeons breed throughout most of the year), noisily asserting their places in the recesses, or ‘pigeon holes’, in the stone walls with their breasts and neck feathers puffed out. The holes must reach a good way into the walls as you can’t see the birds once they are inside, but you can certainly hear them – the stone acts as an amplifier and increases the volume of their ‘cooing’ to almost car-engine level! If I hadn’t seen the birds and only heard the sound I wonder if I’d have known what was making it.

As I mentioned before there are not as many Herring gulls around town at the moment, but despite people’s best efforts to deter them there are always some. They’re way too canny to be taken in by a couple of stone owls.

As I got close to the Watchtower I spotted the first Jackdaw I’d seen for a while, but it didn’t stay long.

This is the highest point of the wall and the logical place for a watchtower; the views, as near to bird’s-eye as you can get, are far and wide, especially on a clear sunny day such as this, and just breathtaking.

This is also the junction of the walls from where you can look back along the way you have come and change direction to walk downhill towards the town and to meet up with the castle itself.

The walkway slopes down to the next tower, which is Upper Gate -I like the little sign warning you that the entrance to it is low.

Beyond that I carried on walking to the Mill Gate and took the steps down to leave the wall, which bring you down near to the railway station. To get back into town, walk along the station platform, take the steps up to Rosemary Lane and turn right to cross the bridge. At the end of the road you are at the junctions of Lancaster Square, Rose Hill Street and High Street.

From the bridge you get a view of the archway in the old walls that the railway line passes beneath. It’s a much-photographed sight and despite the proximity of the station and the town, it has an ethereal feel to it and wouldn’t be out of place in a Tolkein story.

From here I retraced my steps back towards the castle, and in the hope of spotting a few more jackdaws, I followed the path through the archway to the back of the castle. From here the scale of the castle and the height and sheerness of the curtain walls is most apparent and awe-inspiring. How could you fail to be impressed by the symmetry and roundness of the towers? It really is an incredible achievement of design and engineering.

At the side of the path is an intriguing piece of machinery: I don’t know what it is although I have a few theories: I will keep trying to find out, but am hoping someone reading this will know and help me out.

If you continue to follow the path towards the estuary you see the entrances to the tubular railway bridge. This was a pioneering design credited to the renowned engineer Robert Stephenson, although he is said to have enlisted the help of others including Isambard Kingdom Brunel and William Fairbairn. The ingenious engineering takes the route around the south of the castle on a purpose-built ledge, disappearing into two iron “tunnels” which are also a bridge over the estuary.

And it was here that I finally saw Jackdaws as I’d hoped – peering down at me from a niche in the rounded wall of a tower. The perfect way to end a wonderful walk.