October generally sees the last of the butterflies on the wing, but it would seem that records of species emerging earlier and flying later are increasing, which may or may not be attributable to global warming. I was surprised to learn that as many as thirteen species have been recorded as being out and about throughout the UK in this month of the year: it is rated as a ‘low-flight period’ for them, whose duration must surely be dependent on the local weather conditions and available food supplies.

My own list of butterfly species photographed here in North Wales in October is significantly shorter, to date comprising only two mentioned on the above list; the hardy Speckled Wood and the Red Admiral. I have yet to see a Brimstone, let alone a Brown Hairstreak in any month here, and the latest I’ve recorded Small Copper and Small Heath has been during early-mid September. I may well have seen glimpses of some of the others but not on a regular basis. 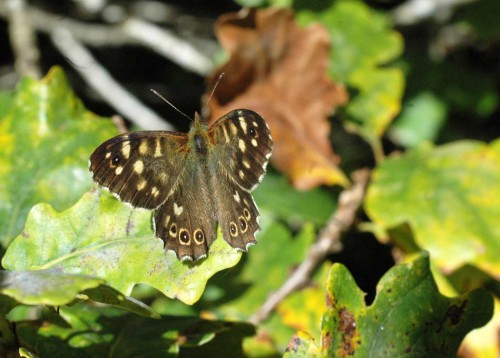 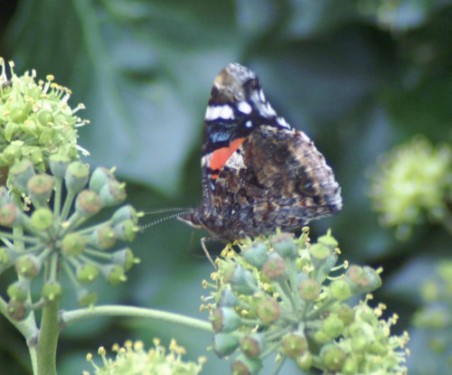 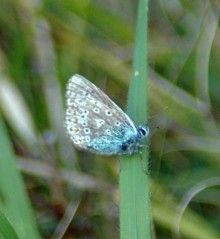 Probably due to this year’s glorious mild and sunny autumn, I do have one to add this year and that is a Blue. At Bryn Pydew there were several, probably Common Blues but as they were all in varying degrees of faded, it was difficult to say for sure. They were not really actively flying around, but rather keeping low in the grass either perched or flitting short distances amongst the low-growing plants then perching again. 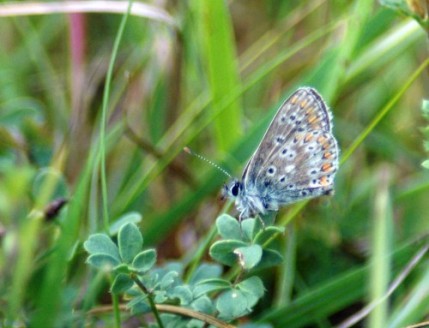 There was a more mobile Silver Y moth there too, who ended up landing on a bunch of ash keys dangling high above my head.

Now, before our beautiful butterflies fade from our summer memories completely, I wanted to bring special attention to one of those that is on the list of 13 that I encountered on the Little Orme in September of this year; a Wall, or Wall Brown.

This was my first and, to date, only sighting of a Wall, Lasiommata megera, in North Wales and seeing it was an unexpected treat for me, particularly as I later learned that this species is far less common that it used to be. Quoted from the UK Butterflies website: “There has been a severe and worrying decline of inland populations of the species, with most remaining populations now being found in coastal areas. This species is therefore a priority for conservation efforts.” It doesn’t appear to be numerous on the coast either, at least not here.

The day of my sighting I was walking on a path on the edge of the clifftop of the Little Orme. The day was beautifully sunny but with a strong cold wind blowing in off the Irish Sea, which may well have brought the butterfly here. It was in an almost-perfect condition and flying low to take nectar from various tiny eyebright and cranesbill flowers. 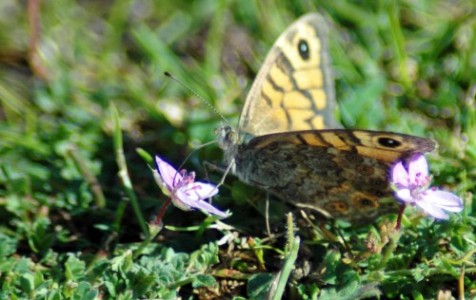 It stayed around for just long enough to allow me to get some images of it in various poses (the butterfly and me as it was so low on the ground) before it took off, probably in search of a more substantial meal. 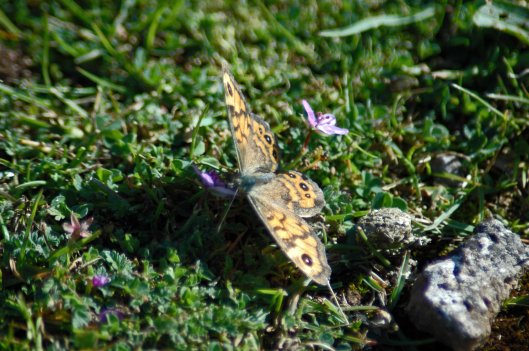 (More info on this butterfly:  https://theresagreen.me/about-the-blog/species-lists/butterflies-of-wales/ )

PS – I’d love to hear if you have more October species to add from other parts of the country.

2 thoughts on “Last of the butterfly days”