Dry, clear-skied sunny days are too much of a gift to ignore, so at the earliest opportunity today I headed up to Bryn Euryn. It’s rained quite a lot here lately, although nothing like as much as ‘down south’, and the weather has been mild so I was particularly interested in looking out for more signs of a very early Spring. I anticipated that taking the form of plant growth, so was taken completely by surprise when leaving my car I was greeted by a chorus of birdsong. And I do mean a chorus, as in several species all singing at the same time.

Standing by the car just listening I could pick out the songs of blackbird, robin, wren, blue tit and great tit. It was lovely and made lovelier by the appearance of a robin hunting around the rubbish bin, a very handsome blackbird landing on the ground right next to me, a pair of great tits in a nearby tree, several blue tits seemingly everywhere at once and a pair of magpie up in a tall ash tree. 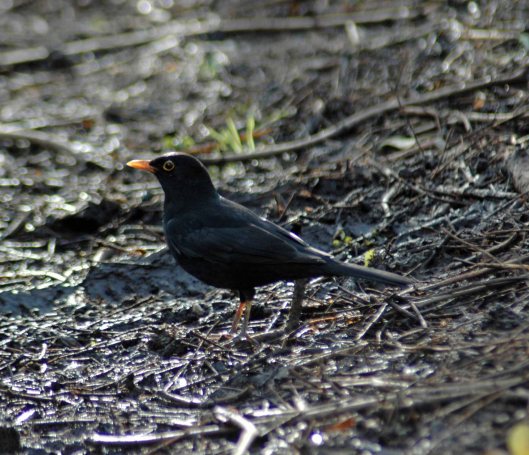 I had clearly arrived at just the right time. As more cars arrived in the car park and people got out with dogs I headed off to walk around the field edge. The blue tits accompanied me, flitting along through the shrubs and trees all the way to the top end of the field. I heard another Wren singing here and stopped and located it, but try as I might, I couldn’t spot the Song Thrush I could also hear singing, his song amplified by the high rock wall.

Up the stone steps

Stopped to try to get a better look at the bird to the right of the wood pigeon, hoping it’s a jay

Turned right at the top of the steps, paddled through a big puddle to get through the gate, then stopped for a while to watch a female blackbird rummaging around on the side of the track, hunting for insects. I love watching them pick up leaves and toss them aside to expose anything hiding beneath them, then tilt their heads to have a close-up look. 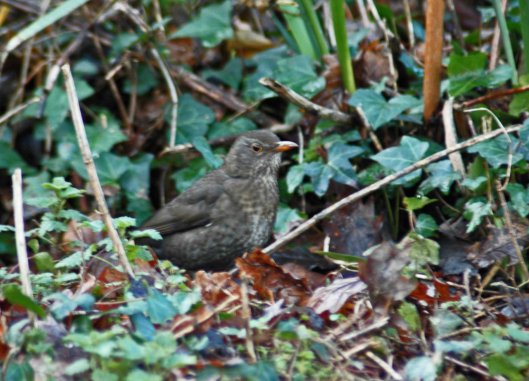 I turned left off the track, stopped to watch chaffinches and blue tits in one of the small oak trees, walked a short way along the edge of the grassy meadow, then turned off again to arrive at the bottom of the steep grass slope of the open heath and headed up to the summit.

As always, well worth the effort for the spectacular views in every direction.

View from the summit

Looking down on the flooded field where curlew, oystercatchers, redshank may be seen feeding amongst sheep

Rhos Point and the ever-growing array of wind-turbines

The only company I had up there today was a pair of Crows. It’s such a privilege to have all this

When there are no leaves or wildflowers attention is drawn to the colour and textures of lichens and mosses. 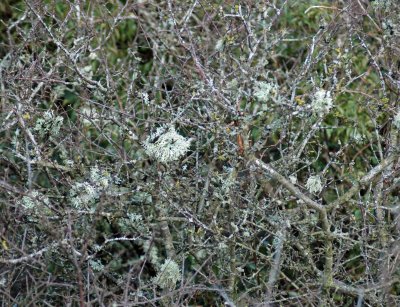 Tracery of blackthorn hung with small bunches of grey-green lichen 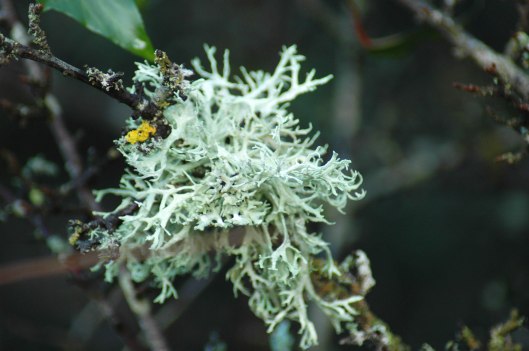 Close up of lichen

A bountiful crop of ivy berries

Going back  down the hill, a flash of bright colour caught my eye and I followed the flight path of what I thought was a male chaffinch until it perched in a small tree. I wasn’t quick enough to focus on it and lowered the camera as it flew away, almost missing the female that replaced it on the same perch. I realised then that these were bullfinch, not chaffinch, a species I haven’t seen here before. I just wish I had been quick enough to get some better images. The one below is just another ‘proof-of-view’! Sorry.

The downhill track was muddy and very slippery so I was more than glad I had the support of my spiky walking pole!

Back in the car park I heard a wren singing again, probably the one I’d heard earlier. I managed to get near enough to see him quite clearly and watch his little performance; a burst of song in one direction, then a spin around and a burst the opposite way, then repeat.

Wren singing in the car park

Spring is definitely on the way, let’s hope it’s not pushing its luck.

4 thoughts on “Winter walking on the Bryn”