January 11th, last leg of the walk on the Little Orme

The winter months offer an opportunity to see places as they really are. Stripped of leaves and layers of foliage, without the colourful distractions of wildflowers and the movements of their insect visitors to draw the eyes, this is the time to appreciate the structure, the bare bones of a place. Walking back down from the top of the Little Orme, not only are the views spectacular, but you also see more clearly the layout of the reserve. On this scale you get a sense of how the patchwork of differing habitats mesh together and create the synergy that has resulted in the rich variety of wildlife that make this such a special place.

A myriad of textures in one small patch of land

The sun, lower in the sky now reveals the true contours of a landscape. You realise a surface which til now has appeared smooth and rounded, is actually textured with a multitude of dips and hollows that are revealed by back-light and shadows.

There is some farming activity on the lower slopes of the reserve where small fields are cultivated for crops and pastureland is enclosed with hedges or small walls and used for grazing sheep. Sheep are also free to range and graze other parts of the reserve too; they are an effective way to keep areas of grass shorn and clear of too much shrubbery and are aided and abetted in their mission by a healthy population of rabbits.

Despite what I wrote earlier about their being less distractions from the bigger picture of a place, I should probably know myself better and accept that I will always find distractions in the details whatever the season. Like a leafless, gnarly, knobbly hawthorn twig softened with lichen and highlighted by the sun.

Lichen on a sunlit hawthorn twig

Going back down Rabbit Hill was trickier than going up as it turned out, as it was quite wet and muddy and slippery underfoot. There was a dunnock so intent on feeding himself before going to roost for the night that he allowed me quite close before shooting off into cover. He wasn’t presenting his best side now, but its good to see things from a different angle now and then. I felt sorry for my disturbance, I know how hard it is for birds to find enough food to keep them going in the winter, especially through the cold nights. 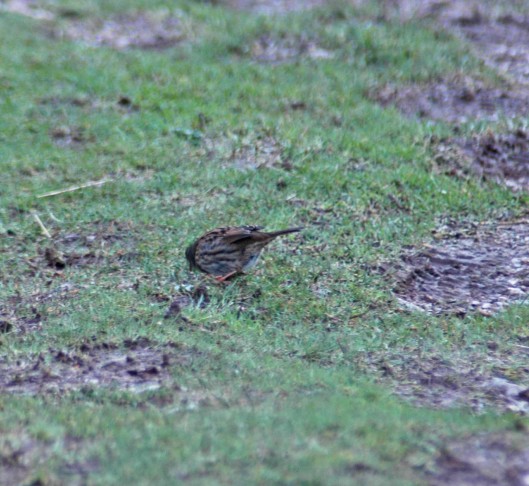 A dunnock feeding on the slope of the downhill track

At the bottom the Robin was still about too, adopting the classic hunting method of the species by perching up off the ground and scanning the ground beneath them, then pouncing down onto potential prey. 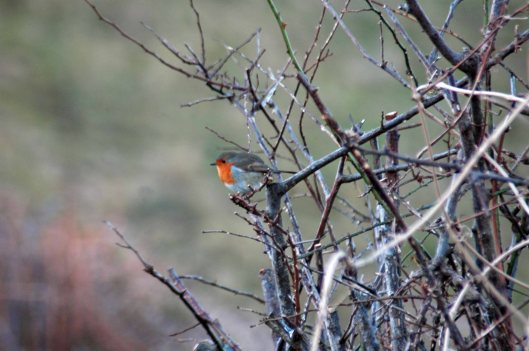 Robin scanning the ground beneath for something edible 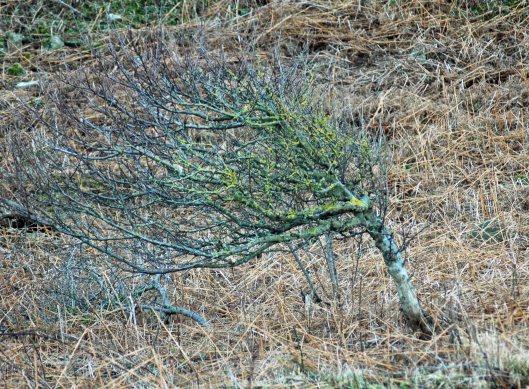 I had the thought of finishing off my walk along the quarried-out gorge that ends, or begins near one of the entrances to the reserve, but to my surprise much of its floor was covered by a pool of water several inches deep. My reason for wanting to go that way was to see if there may be a Song Thrush hunting for snails along the rocky wall there. Last year I spotted a pair nesting there and watched them as they hammered a succession of snails into palatable food for their young ones. 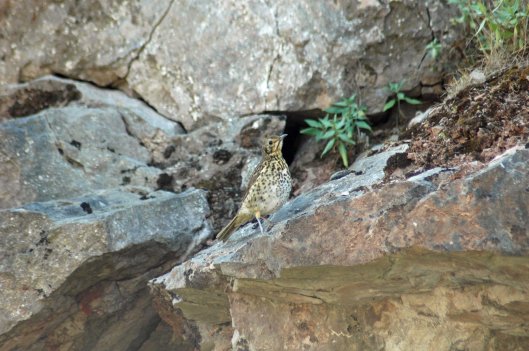 Song Thrush, photographed last July. One of a nesting pair.

Instead I carried along in the same direction, but around the top towards the large, sculptural lump of limestone that always puts me in mind of the Sugar Loaf Mountain, but in miniature of course. Sort of, with a bit of imagination? Regardless, I love that rock and have often wondered how it ended up there. 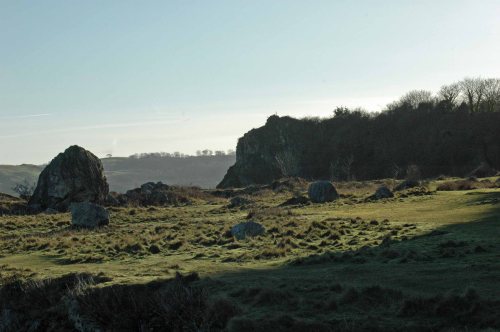 I am referring to the Sugar-loaf Mountain in Rio de Janeiro here, not the one in Wales that has the same name!

One last thing, are there really green leaf buds on this tree already?

8 thoughts on “…and back down again”