Our local ‘gang’ of House Sparrows are currently livening up the neighbourhood with their cheerful chirpings and chatterings as they go about industriously sprucing up their nests. A few pairs have located theirs very close to the house but tucked safely within the depths of the fiercely prickly pyracantha hedge, then at least one or two others are sited in the loftier location of the eaves of the front of the house from where they must have wonderful views to the Little Orme and right across Colwyn Bay and the Irish Sea.

I have always loved House Sparrows and in these days of generally lesser numbers of them, I consider myself very fortunate to have had their company everywhere I have ever lived and truly hope it continues that way. My affection for these charismatic little birds grew from sharing a home with them, quite literally, during the ’60s when our family lived in a thatched cottage on a country estate in Northamptonshire. Back then house sparrow numbers were much greater and along with jays, crows, wood pigeons and foxes were considered as pests and used as target practice by the estate’s gamekeeper, or indeed anyone of any age with access to even a simple air rifle. Admittedly the birds did have a tendency to make a bit of a mess of the thatch by extracting reeds to construct their nests, but how were they supposed to know our roof was not just a convenient pile of grass stalks? Besides which, their similar activities throughout the estate probably helped keep the local thatcher in steady employment.

In gardens, sparrows have an unexplained habit of tearing the petals off flowers, particularly yellow or orange ones such as crocuses. In my old garden in South Wales they would decimate first my yellow crocuses, then the berberis blossom and then later the red-hot pokers….

A male House Sparrow atop the pyracantha hedge

The first reference to a sparrow in Britain is by the Venerable Bede (?673-735) in his History of the EnglishChurch and People: “O King, the present life of men on earth is like the flight of a single sparrow through the hall where, in winter, you sit with your captains and ministers.”

Sparrows have often been eaten and in some places still are. Sparrow pie was a common rural dish in Britain up to the time of the First World War, and even later: a sparrow pie containing 100 sparrows was served on 16 January 1967 at the Rose Inn at Peldon, near Colchester, perhaps for the remaining members of one of the “sparrow clubs” that were once common for trapping the birds.

On the Continent, where small songbirds are still a prized delicacy, sparrows are sometimes illegally imported in great numbers from China: a consignment of 1,263,000 plucked and frozen sparrows was confiscated by customs in Antwerp on 28 January 1997, and a consignment of nearly 2 million frozen tree sparrows was seized by customs in Rotterdam in November 1993, in transit for Italy.

In 2002 in the UK, the house sparrow was added to the red list for endangered species. In 2004 it was added to the Worldwide International Union for Conservation of Nature Red List. According to the RSPB we have lost 50 HOUSE SPARROWS EVERY HOUR FOR 46 YEARS!

The State of the UK’s Birds 2012 report charts the ups and downs of our bird populations over the last few decades. Although still abundant, the house sparrow has seen one of the greatest losses of any bird in the UK. From an estimated 30 million individual birds in 1966, the UK house sparrow population plummeted to 10 million in 2009, a loss of 20 million sparrows in 43 years.

Dr Mark Eaton is an RSPB scientist who worked on the report. Commenting on the figures, he said: “It is shocking to think that we’ve lost one in five of the individual birds that we had in the 1960s. That loss is equivalent to the whole human population of England and Wales.”

A number of reasons for the decline have been found, including predation by domestic cats, but first and foremost is the changes in farming practices, where more farms are using pesticides and herbicides and sowing seeds at different times of the year: adult birds eat grains and seeds, but they gather thousands of insects to feed their young.

The sparrow population in London has plummeted by 68 per cent in the past 15 years, mirroring severe declines in numbers of the bird across the UK’s cities. Research has indicated that changes to urban areas including increases in traffic, paving over gardens, removing trees and developing green spaces have led to a lack of seeds and insects which has left sparrows struggling to survive.

Territorial male, feathers puffed out to make himself look intimidating

In the past the house sparrow’s likeness for crops resulted in farmers attempting to control their numbers. In the 18th century, sparrow clubs existed to destroy as many sparrows as possible and money was paid to do so until the late 19th century.

The house sparrow’s problems have by no means been restricted to the UK. The Sparrow has followed man to most parts of the globe where they have adapted to a whole range of differing environments and habitats. Wherever they have found themselves they have quickly settled in acclimatised, found food and nesting sites. They are true world citizens, but have not always found acceptance or integration easy; they have often been the subjects of much prejudice and discrimination.

A certain traveler who knew many continents was asked what he found most remarkable of all.
He replied: the ubiquity of sparrows.
Adam Zagajewski, Another Beauty, 2002

In Europe, in the 1700s, local governments called for the extermination of house sparrows and other animals associated with agriculture. In parts of Russia, your taxes would be lowered in proportion to the number of sparrow heads you turned in.

In China, the Great Leader Mao Tse-Tung decided in 1958 to get rid of sparrows, calculating that each bird (the tree sparrow) consumed 4.5kg of grain each year and that for every million sparrows killed, there would be food for 60,000 people.

He mobilised the population to kill the birds, to great effect: at least 2.8 million sparrows were killed in Shantung province alone. But what Mao had not taken into account was the number of noxious insects the sparrows consumed when rearing their young. When the sparrows were killed, crop production increased, at least initially. But with time, something else happened. Pests of rice and other staple foods erupted in densities never seen before. The crops were mowed down and, partly as a consequence of starvation due to crop failure, 35 million Chinese people died. That is when a few scientists in China began to notice a paper published by a Chinese ornithologist before the sparrows were killed. The ornithologist had found that while adult tree sparrows mostly eat grains, their babies, like those of house sparrows, tend to be fed insects. In killing the sparrows, Mao and the Chinese had saved the crops from the sparrows, but appear to have left them to the insects. And so Mao, in 1960, ordered sparrows to be conserved (replacing them on the list of four pests with bedbugs).

It is sometimes only when a species is removed that we see clearly its value. When sparrows are rare, we often see their benefits; when they are common, we see their curse.

Who’s a pretty girl then

Conservationists have launched a scheme to turn parts of London’s parks into meadows in an attempt to reverse the decline of the once-common house sparrow. The £170,000 scheme is being funded by the SITA Trust which manages funding raised through taxes on rubbish sent to landfill.The conservation charity has teamed up with a number of partners across Greater London to run a three-year project to try and provide food-rich habitats for the birds. Tim Webb, spokesman for the RSPB, said the plan was to sow areas of more than 20 parks in the capital with wild grasses and flowers to provide seeds and attract insects.

Many chicks are dying in the nest of dehydration or starvation because there are not enough moisture-rich insects for them to eat.

In India, where the birds have also suffered a serious decline in numbers in recent years, there are campaigns to raise public awareness of the birds and their plight, and in 2010, the date of March 20th was nominated as “World Sparrow Day”, henceforth to be celebrated annually. 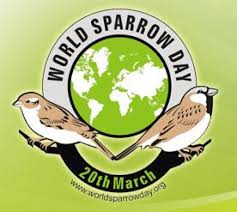 World Sparrow Day is a day designated to raise awareness of the House Sparrow and other common birds to urban environments, and of threats to their populations, observed on 20 March. It is an international initiative by the Nature Forever Society of India in collaboration with the Eco-Sys Action Foundation (France) and numerous other national and international organisations across the world.

The Nature Forever Society was started by Mohammed Dilawar, an Indian conservationist who started his work helping the House Sparrow in Nashik, and who was named one of the “Heroes of the Environment” for 2008 by Time for his efforts. The idea of marking a World Sparrow Day came up during an informal discussion at the Nature Forever Society’s office. The idea was to earmark a day for the House Sparrow to convey the message of conservation of the House Sparrow and other common birds and also mark a day of celebration to appreciate the beauty of the common biodiversity which is taken so much for granted. The first World Sparrow Day was celebrated in 2010 in different parts of the world. The day was celebrated by carrying out different various kinds of activities and events like art competitions, awareness campaigns, and sparrow processions as well as interactions with media.

World Sparrow Day also has a broader vision to provide a platform where people who are working on the conservation of the House Sparrow and other common birds can network, collaborate and exchange conservation ideas which will lead to better science and improved results. It aims to provide a meeting ground for people from different parts of the world to come together and form a force that can play an important role in advocacy and in spreading the awareness on the need of conserving common biodiversity or species of lower conservation status. 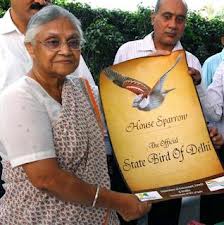 The humble house sparrow has become the State bird of Delhi with the issue of a notification to this effect, Chief Minister Sheila Dikshit announced o Friday.

Addressing school children at her residence during a function organised to celebrate Wildlife Week, Ms. Dikshit said the idea behind making the house sparrow the State bird was to protect it.

She said the number of house sparrows in the city had declined sharply due to rapid urbanisation.

“I can tell you that when sparrows are rare, we tend to like them, and when they are common, we tend to hate them. Our fondness is fickle and predictable and says far more about us than them. They are just sparrows. They are neither lovely nor terrible, but instead just birds  searching for sustenance and finding it again and again where we live.”

6 thoughts on “The not-so-common House Sparrow”