I know it has been an age since I published my last post, but too many other things have needed my attention and something had to give. I have been keeping an eye on things though and taking comfort from the fact that while we fill our lives with complications, nature is much more straightforward and the seasons’ events have unfolded as they should, without fuss. It would be fair to say that any posts I might have made would have been very similar to those from last winter, so I’ve been thinking how I can make this year’s a bit different.

I’ve done a fair amount of travelling this winter, making the train journey from Colwyn Bay down to Leicester and back again several times. It is a long journey, taking about 4 hours each way to complete, but the route is interesting, and takes you through some wonderful scenery. I have become intrigued by some of the places the train stops at or passes through, so I thought I might try to visit some of them this coming year and find out a bit more about them and their surrounding area. I joined the National Trust last autumn too and would like to get as much as possible from my membership, so as there is a rich variety of Trust properties around this England/Wales border country, that should not be too difficult, providing I can find the time to make the trips.

One of the station halts is at Chirk, which I knew to be famous for its castle, but there my knowledge ended. It has a nice little station that is dwarfed by and juxtaposed with an enormous wood-processing plant whose chimneys belch out great streams of  thick white steam, or is it smoke? Now to go off at a bit of a tangent, I was researching places where I might find a good display of Snowdrops and by a happy sort-of coincidence, it happens that there is such a thing in the gardens surrounding Chirk Castle, that is owned by the National Trust and is within reasonable driving distance of here so a visit there would tick off at least three of my boxes in a single day. The Snowdrops would be at their best in February, so that gave impetus to making the effort, which is what is needed sometimes, especially in the winter.

Chirk Castle from the gardens

Completed in 1310, Chirk is the last Welsh castle from the reign of Edward I that’s still lived in today. Features from its 700 years include the medieval tower and dungeon, 17th-century Long Gallery, grand 18th-century state apartments, servants’ hall and historic laundry.

The award-winning gardens contain clipped yews, herbaceous borders, shrub and rock gardens. A terrace with stunning views looks out over the Cheshire and Salop plains. 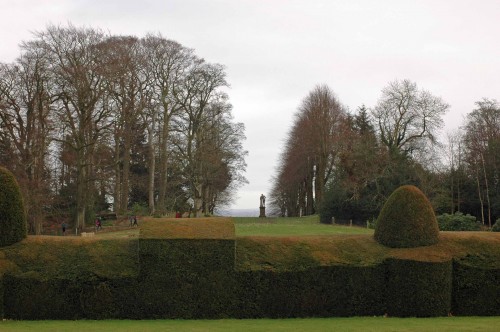 We had a look around the parts of the castle that were open today, had a pleasant lunch, de rigeur when visiting a National Trust property with one’s other half who would prefer to be at home watching the football on a Saturday afternoon, then headed for the gardens. The Snowdrops were beautiful, well worth the effort to go to see.

A carpet of Snowdrops beneath the trees

A  closer view of a beautiful sight 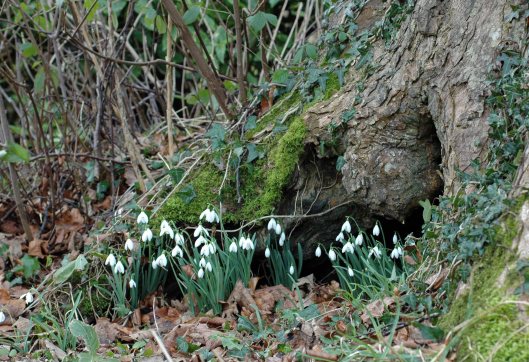 Snowdrops are iconic flowers that traditionally herald the ending of winter and are surely too well known to need a description.

Conservation status: Rated as Near Threatened (NT) according to IUCN Red List criteria. 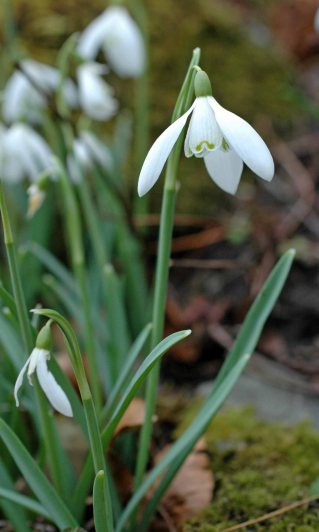 Habitat: On the European continent Snowdrops grow in wild habitats, in damp woods and meadows up to 1,600 metres; the leaf tips are specially hardened for breaking through frozen ground. In Britain, Snowdrops are possibly both native and naturalised and were not recorded as growing wild here until the 1770s. It is very likely that many of our colonies of wild Snowdrops originated with ecclesiastical plantings. The pure white blooms of the Snowdrop have long been accepted by the Catholic Church as a symbol of Candlemas, celebrated on February 2nd, the Feast of the Purification of the Virgin Mary, and their association with monastic sites is apparent right across Britain.

Although the flowers are sanctified for Candlemas, the snowdrop is one of the many white blossoms that are still regarded as being unlucky if brought into the house. In parts of Northumberland, Westmorland and Hampshire, single flowers particularly are still viewed as ‘death-tokens’. This may be as one Victorian explanation was that the flower “looked for all the world like a corpse in its shroud”. According to the ‘language of the flowers’, the snowdrop was an emblem for virginity, and a few blooms enclosed in an envelope were often used to warn off over-ardent wooers. In a similar vein, in Yorkshire there was an old custom, again celebrated on Candlemas, for village maidens to gather bunches of snowdrops and wear them as symbols of purity. (extracts from Flora Britannica, Richard Mabey)

The alkaloid Galantamine, which was initially isolated from snowdrops, has been used in treatments for Alzheimer’s disease, neuritis and neuralgia. In parts of eastern Europe, rubbing snowdrops on the forehead was a folk remedy used for pain relief.

Known hazards: Snowdrops and their bulbs are poisonous to humans and can cause nausea, diarrhoea and vomiting if eaten in large quantities.

10 thoughts on “Snowdrops at Chirk Castle”