My dad made the journey from Leicester to visit me this weekend and we decided to visit a place that is very special to both of us and evokes many happy memories of holidays spent with him and my sisters on the Isle of Anglesey.

When we first used to spend days at Newborough Warren and Llanddwyn Island, the area was much less visited than it is now and there were many occasions when we hardly saw another person there. To reach the beach  there was just a very rough track through the then forestry commission owned pine woodland and you just parked at the end of it. Now the entrance to the forest has a barrier which costs £3 to pass through in a car, the track is tarmacked and there is a designated carpark with toilets and picnic areas. It is still a magical place, with history, myth and legend as well as wild beauty and if you ever get to visit this area, especially outside the summer months, it is a place to put at the top end of your must-explore list.

Newborough Warren and Llanddwyn Island (Ynys Llanddwyn) are situated near the southern entrance to the Menai Strait. The areas are national nature reserves holding a diversity of habitat including  dunes, mudflats and saltmarshes that support a wide range of plants and invertebrates.

The view across the dunes to Llanddwyn Island. The sand dunes around this area are known as being the largest in Wales and are amongst the finest in Europe.

Our visit this weekend was brief as my dad is no longer able to walk far and it was too cold for sitting around on the beach. Back in the day he would have walked us the length of the beach, which is about a mile long, through the nature reserve on the headland to reach the lighthouse, where we may have had a bit of a picnic before exploring the beach on the other side of the headland and walking back again. 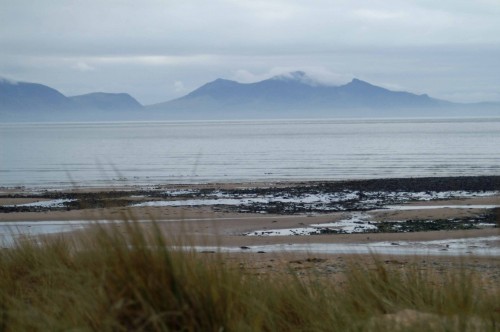 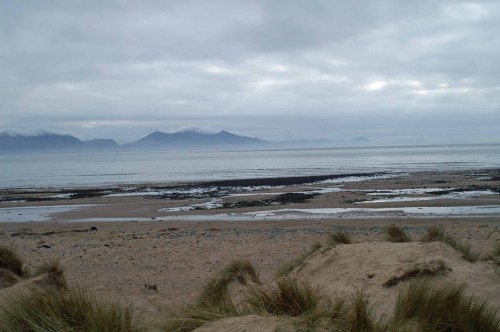 When you arrive at the beach you are confronted by this wonderful expanse of golden sandy beach and by a stretch of sea that is generally tranquil and often lake-like, but yet you can hear the sound of surf. That was always a big part of the magic for me; as on the other side of the headland you discover the source of the noise as here big foamy waves come roaring in to the beach. 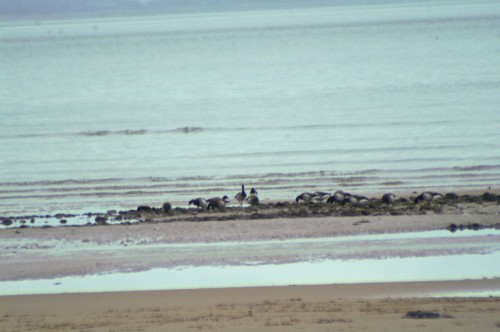 Geese on the sea edge may be Canada geese or possibly pale-breasted Brent geese; both species occur here on Anglesey

The forest area has red squirrels and is locally famed for its roosting ravens. The cliffs around the island support a wide variety of nesting seabirds, including cormorants, shags and oystercatchers. Ynys yr Adar (Bird Rock), a small islet off the tip of Llanddwyn, throngs during the spring with one percent of the total British breeding population of cormorants. Waders such as turnstones and sandpipers are found along the coast and terns can be seen fishing in the bay. Today I had to content myself with those birds I could see easily from the beach in  front of the carpark and at a distance away. There were mainly oystercatchers and gulls with one or two curlew, but there were also a number of large birds that I first thought were shelduck but decided upon geese. I didn’t have binoculars with me and the light was poor, so I was relying heavily on the camera lens to help me out with a good enough shot to identify the species; Canada, Greylag and Brent Geese are all a possibility.

Mistle thrush from the front holding something in its bill

Sitting at a picnic table close to the carpark I watched  a largish bird balance quite precariously on a short branch low on a pine tree before venturing down to hunt in the grassy area below.  It was a mistle thrush, which despite its size was very well camouflaged in low light and against a background strewn with dry grass and twigs. 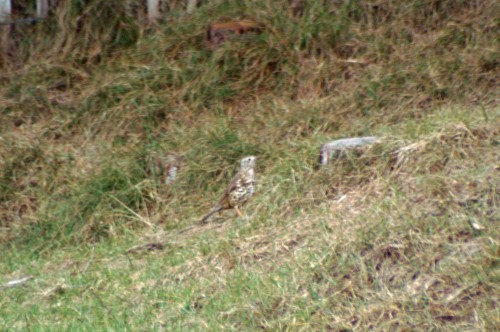 On the forest edge a Mistle Thrush ventured out to hunt

As I said earlier this was just a very brief look at a beautiful and complex area, but now I’ve reacquainted myself with it I intend to return very soon for a proper exploration.

Other claims to fame:

CD album cover shot of Manic Street Preacher's 'This is my truth, tell me yours' was taken here

In 2004, Llanddwyn Island was used as a filming location in Demi Moore’s romantic thriller Half Light. Tŵr Mawr was used as a lighthouse which plays a key role in the film. CGI was used to create the effect of a real light on top of the lighthouse.

In 2009, a scene for the Hollywood blockbuster Clash of the Titans was filmed at Llanddwyn.