I photographed my first sighting of a Pyramidal Orchid on June 5th, where it was growing through a complimentary patch of Common Rockroses. Since then they have come on apace and there are many more showing their beautiful heads amongst the long grass that fringes the summit of the Bryn.

Ten days later the rush of blooms had slowed and whilst there were still a good number to be found, they are more scattered and most significantly smaller than the earlier ones were.

This orchid may be found flowering from early June through to early August, but here it is definitely at its peak now and flowering abundantly.

In general, the Pyramidal Orchid is found on grassland, usually on lime or chalk, but also on dunes. It is locally common in most of Britain, but rare in Scotland. 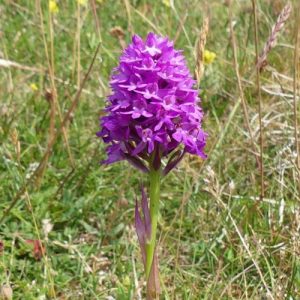 The plant is so-named for the shape of the flowerhead: a workaday name for such an exotic-looking bloom I think, although it does help to distinguish it from the Fragrant Orchid, with which it may be confused.

The plant’s success and abundance may be due to its relationship with insects. Each flower has a long thread-like spur that holds a generous supply of nectar that attracts day and night flying butterflies and moths. When the nectar is accessed, modified stamens stick to the tongue of the insect that straighten during the insect’s flight and are then pushed directly onto the stigma of the next flower visited. This results in viable seeds being produced in 95% of the flowers.

Crossing the hill’s summit and walking through the ‘downland’ area, more Orchids are blooming prolifically, these being Common Spotted Orchids.

Flower spikes of plants on Bryn Euryn vary in colour. Most are this lilac-purple colour, others are white with a few in shades between.

The flowers vary from white to pale or dark purple and are patterned with dots or small blotches of a darker purple.

The leaves are narrow and usually dark-spotted. 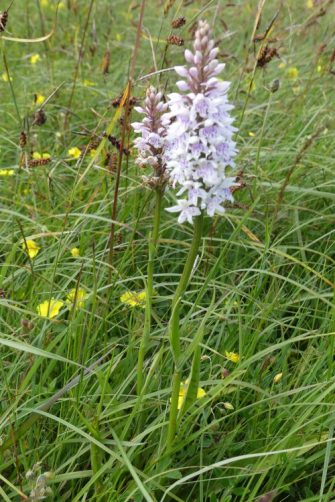 I was surprised to find just one other car in the car park when I arrived at ‘the Bryn’ on a warm sunny early afternoon last week; I had expected it to be busier, so was pleased that I would be able to enjoy this lovely but popular reserve while it was peaceful. The peace didn’t last long! I began my walk with a circuit of the grassy area next to the car park, checking out the wildflowers for any interesting insects and was soon joined by a man walking a smallish dog. It appeared he was doing the job on sufferance, releasing it from its lead while he wandered around talking loudly on his mobile phone, breaking off frequently to shout at the dog. Things got even worse when another man with two dogs, both on leads, arrived, causing the loose dog much excitement and its walker to shout even more. I decided to leave this bit for another day and hurried off onto the stepped track woodland track towards the top of the hill.

I stopped halfway up, in front of the cottage where the track divides as I caught sight of a large bramble bush covered with blossom. I saw a Comma butterfly feeding here but missed the brief photo opportunity; I also missed a Holly Blue, but I did catch one of a Green-veined White basking on a clematis leaf.

The woodland was silent, usual at this time of year due to the lack of birdsong and calls, but making you wish you could move more quietly and be less conscious of every footfall you make.

I was taken by surprise when the silence was broken by a soft ‘huit’call from close by and I looked up to see a young Chiffchaff in a sycamore tree.

A young Chiffchaff sitting in a Sycamore tree

The foliage of the woodland trees is still fresh, not yet showing the dusty tiredness of late summer, the greenness is carried through and down to the floor beneath, accented by glossy Hart’s Tongue ferns and cushions of soft green moss. 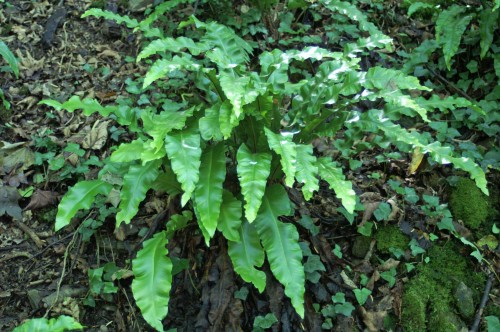 A perfect Speckled Wood resting lightly on a fern frond

Emerging from the dappled shade onto the grassy hilltop my eye was caught by the low fluttery flight of small orange and brown butterflies- Small Heaths, several of which were flying in quite a small area and looking perfect and newly-emerged. 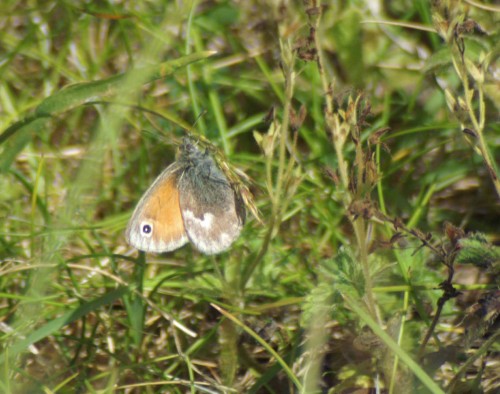 There were a lot of Meadow Browns too, keeping low to the ground and often disappearing from sight as they tucked themselves down on the ground amongst the grass stems. 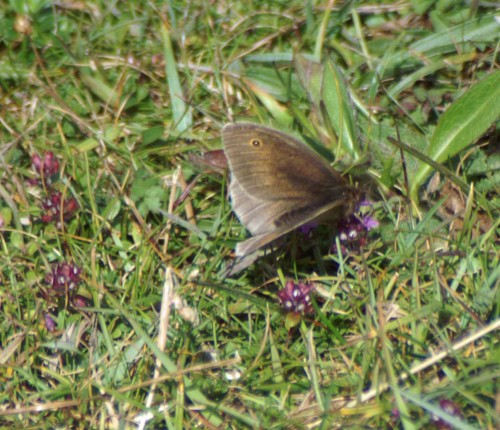 I carrried on round the hilltop admiring the stunning panoramic views stretched out beneath and across to the Snowdonia mountains, making for the summit, then continued on down the other side onto the grassy meadowland.

The grass was studded with beautiful blue Harebells that look dainty and delicate but must be pretty hardy to thrive in the habitats they are found in. 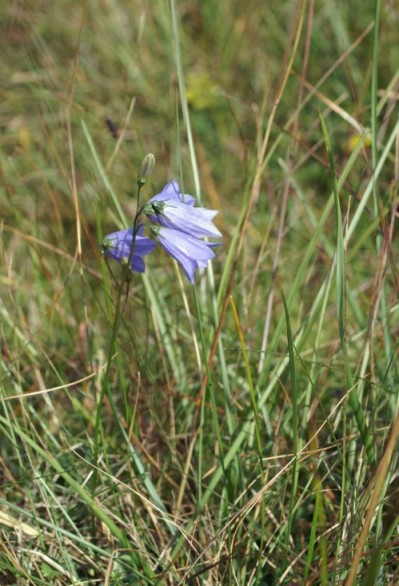 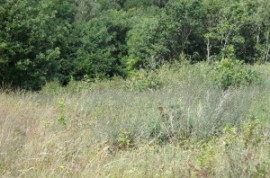 The long grass and tall wildflowers attracting many butterflies

I had half-decided to continue walking down the slope to the woodland at the bottom, but as I passed by the area where the grass has been kept longer and where brambles, thistles and knapweed were flowering, I caught sight of a large brown butterfly flying fast and strongly, that then landed on a knapweed flower. Unmistakably a fritillary, although I had no idea of the species: its colours looked rather faded and it there was some damage to the wing edges, so it may have been around for a while and I didn’t get sight of its underwings. Checking later on I think its most likely a Dark Green Fritillary, but as ever I’m happy to be corrected.

I sat on the grassy slope for a while hoping for more fritillary sightings, which happily I got; in addition there were more Green-veined Whites and several Small Skippers flitting around low amongst the long grass. 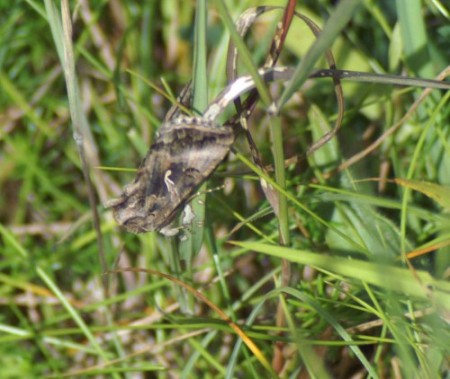 A Silver Y moth – Autographa gamma, also caught my eye as it fluttered in the long grass

I heard the ‘bark’ of a Raven and just caught sight of it as descended, landing somewhere beyond the slope out of sight. A Buzzard circled overhead. Preparing to leave and retrace my steps I crossed to the other side of the slope, took a photograph of the Little Orme and spotted a lovely specimen of Thistle. 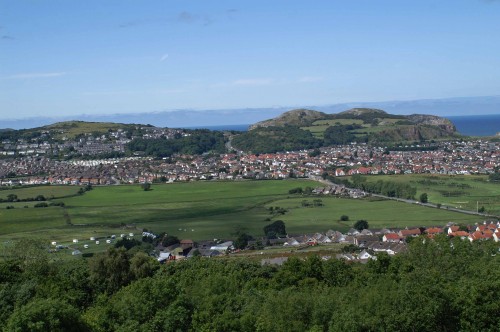 Reaching the thistle I was delighted to spot orchids growing in the quite-long grass, I wasn’t expecting that at all. As with the fritillary butterfly they were a little past their best, but still pretty;  most were pink in colour, but there were some white ones too. (I still am unsure what species they are, will update when I find out.)

A group of pink-purple orchids 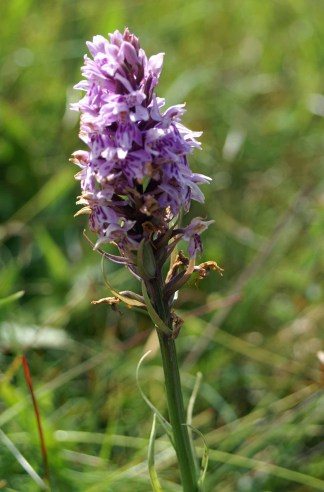 Leaving the orchids I was more than happy with my afternoon’s discoveries and turned to head back up to the summit then down and back to the car. I couldn’t resist sitting to gaze at the view for a few minutes and got distracted by flies, flesh-flies to be accurate, that have rather unpleasant eating habits, but that actually look quite attractive.

Making my way back down the slope I spotted another butterfly land on a warm rock,  a gorgeous Grayling.

A Grayling – Hipparchia semele resting on a warm limestone rock

Then close by a female Large White landed on a leaf.

Finally reaching the top of the path downwards I very shortly stopped again for yet another butterfly, this time a Red Admiral that posed beautifully on a wild rose leaf  in a spot of sunlight. 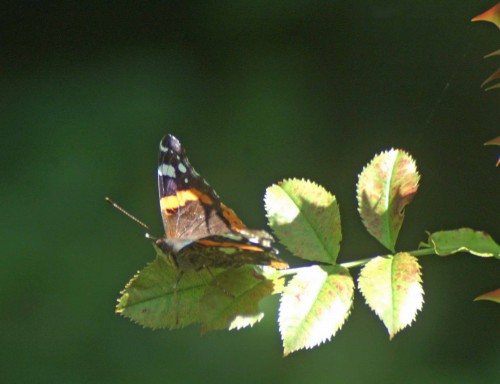 There were more people around as I made my walk down, most of whom were walking dogs. I made a quick stop at the brambles where I’d seen the Comma earlier, hoping it may return, which of course it didn’t, but I did see some young Chaffinches in a tree there. As I got close to the bottom of the hill I caught sight of a bird on the ground tugging at something it had found. It was a Thrush and by the way it took little notice of me I assumed it was a young one. I attempted to photograph it but it was far too shady there, so I just stood and watched it for several minutes. It carried on foraging quite untroubled until we both heard the ‘mewing’ of a Buzzard and the simultaneous rough cawing of a Crow. The Buzzard, again I think a young one, came crashing through the trees and landed on a branch, looking very ruffled and quite upset: I assume the Crow must have pursued it there. The Thrush was long gone. 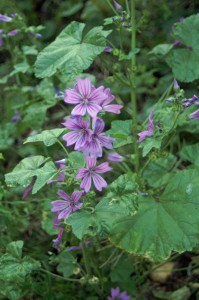