In these days of declining numbers of many, if not most of our butterfly species, I wonder if we will ever be persuaded to look more fondly, or at least a little more appreciatively upon our more common White ones? Might it have helped if those early entymologists and pioneer collectors had bestowed them with pretty common names, rather than the functional ones of Large or Small Whites? 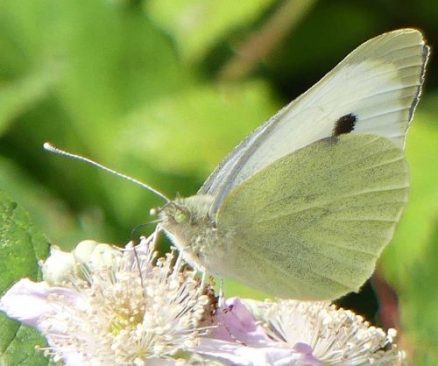 The truth is, probably not. The butterflies downfall from our grace, supposing they were once in that state, coincided with our cultivation of cabbages and other related members of the brassiceae family for our own consumption. Plants that contain the stuff essential to the health and well-being of these butterflies’ larvae, as decreed by their evolution. The plants became abundant and readily accessible to the opportunistic butterflies and why would they not take advantage? They dared to invade our space though and became a serious pest, even an enemy. This is why many of us have grown up still calling both Large and Small Whites ‘Cabbage Whites’, especially if our parents grew our family’s veg. And why school cabbage often had a boiled green caterpillar in it.

In 1717 James Petiver published the first book devoted exclusively to British butterflies, entitled Papilionum Brittaniae Icones. In it  Petiver gave English names to a number of species, some that he made up himself. Others were taken from existing common useage, including Pieris rapis (brassicae), which he called the ‘Great White Cabbage Butterfly’ and/or the ‘Great Female Cabbage Butterfly’.

2016 has not been the best year for butterflies in general and my collection of species photographed so far had several gaps in it compared to last year’s, two of which were reserved for the Large and Small White. A walk on the Little Orme today filled one of those gaps. I was walking around the base of the cliffs, mostly looking up as I had spotted a Raven perched on a ledge and was trying to get close without disturbing it. It flew off of course, but below where it had been was a large bramble bush smothered in late blossom. Only as I got close to it did I realise it was attracting a crowd of White butterflies; so well camouflaged against the pale flowers in bright sunlight that I hadn’t noticed them.

Most of the butterflies were females, newly emerged, in need of food and clearly available to male interest. It took a few minutes for me to realise why there were so many here and where they had come from: until I spotted one fluttering around the leaf of a Wild Cabbage plant in fact! I couldn’t believe it had taken me till now to make such an obvious connection; the amount of times I have seen White butterflies here before, have noticed (and blogged about) the abundance of Wild Cabbage plants …… Oh well, I got there in the end! 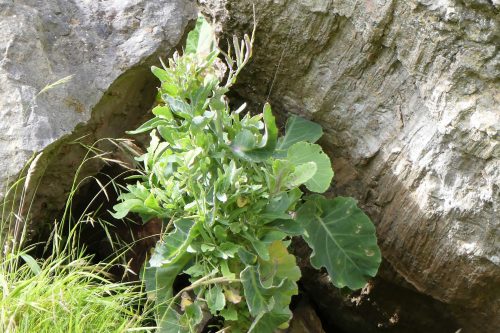 The Wild Cabbage (Brassica oleracea), sometimes known as Sea Cabbage,  is regarded as scarce by botanists as it is found in only 100 x 10km squares in the UK.  The Little Orme and Great Orme in North Wales and the Gower Peninsular in South Wales are strongholds of the plant. Where it does occur, the plant is found on maritime cliffs, usually of limestone or chalk, typically growing on or near to cliff tops or cliff bases, often on ledges containing other mixed herb communities.

The Large White Pieris brassicae is a strong-flying butterfly. It is indeed large; males have a wingspan of up to 63mm & females of up to 70mm. Both have bright white wings with black tips to the forewings that extend down the wing edges. Females have two large black spots and a dash on both sides of each forewing that are absent from the upper surface of the males. The

In the British Isles the Large White is double brooded and females lay eggs any time from March to October. Most are laid during July and August when the numbers of resident butterflies may be increased significantly by migrants arriving from Europe. This also happens to coincide with maturing brassica crops.

Plants and insects have evolved together: plants needed butterflies for pollination and in return plants provided foliage for their caterpillars. The plants chosen as egg-laying sites by the Large White typically contain mustard oil glucosides, whose primary function when subsequently eaten by the larvae, is to make them distasteful to predators such as birds and protect them from attack. The preferred larval food plants are primarily various Crucifers, but they will also use Wild Mignonette and in parks and gardens Nasturtiums may be targeted.

Back on the Little Orme to see if I could find Large White eggs and/or caterpillars on any of the plants around the bramble bush.

The butterflies avoid putting too many eggs on one plant to prevent the caterpillars running out of food and it took me a while to find an intact leaf that had an egg cluster beneath it. I only managed to find one caterpillar in a very early stage of its development, and as Small Whites also use the plants I can’t be sure which species it belongs to.

I finally found a well-grown Large White caterpillar on 10th September on a Wild cabbage leaf on an exposed part of the cliff directly overlooking the sea. It was a sunny day but with a chilly breeze and it wasn’t moving much. Clearly confident nothing would try to eat it.

The Butterfly’s Status as a Pest species

In the present day, areas such as Great Britain, P. brassicae are now less threatening as pests because of natural and chemical control reasons. However, it is still considered a pest in other European countries, in China, India, Nepal, and Russia.

The most susceptible crops to P. brassicae damage in areas in Europe include Brussels sprouts, cabbage, cauliflower, Kohlrabi, rape, swede, and turnip. The attacks to crops tend to be localised, but can lead to 100% crop loss in a certain area. In addition, because of its strong inclination to migrate, adults may infest new areas that were previously free from attack.   It is estimated to cause over 40% yield loss annually on different crop vegetables in India and Turkey.