Yet another windy day with intermittent sunshine, so I’m seeking shelter in the woods. It is almost eerily silent and the damp soft earth of the path absorbs the sound of my footsteps. Something detects my presence at the last minute; loud rustling sounds from the undergrowth startle me and a panicked grey squirrel shoots out in front of me, sprints rapidly along the path and launches itself up the trunk of the nearest large tree. It pauses when it feels safely hidden behind foliage, but I spied it through the leaves, its mouth filled with an acorn, still green and unripe.

There are ripe blackberries, but on the early fruiting brambles some are already mouldering, and a feasting greenbottle fly reminds me why I don’t eat too many unwashed wild berries.

Chains of scarlet berries drape shrubbery. This one twined through holly reminded me of a Christmas garland; I wonder if sights such as this sparked the idea for festive decorations?

The berries are those of Black Bryony-Tamus communis, and will continue to ripen until they are black. A perennial plant described as twining, but often it’s more of a scrambler.

There are rose hips here

and a bramble whose leaves look as though they are almost ready to drop. 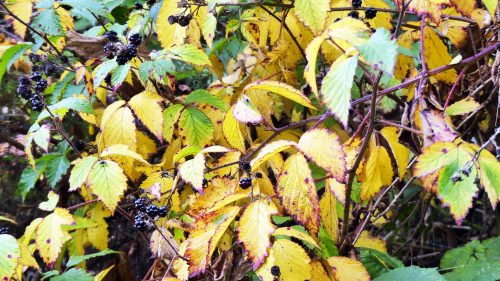 The gorse bushes have fresh golden blossom and clever spiders have spun webs in the hope of capturing flying insects drawn to their nectar and pollen. Gorse flowers throughout most months of the year prompting the old saying, “When gorse is out of flower, Kissing is out of season!”

The last time I walked here I took a slightly different route to the summit of the hill, taking an unmarked track up through the woodland to join the Summit Trail. I hadn’t planned to that, but at the junction of the paths I usually take I’d stopped to try to locate Jays that I’d heard screeching in nearby trees and a man with a dog stopped to ask me what I was looking at. We had an interesting chat comparing notes about what we both see here and where, but I didn’t catch the Jays. I waited to see which way he would go to continue his walk and seeing it was the same way I was headed, decided to go the opposite way. Not that I’m unsociable of course, rather that I see far more on my own and in my own time; and he had a dog! Anyway, the upshot was that I ended up on a narrow upward track through the trees on another windy day that was sunny but still damp from the previous night’s rain.

Spiders’ webs lit by the sunshine filtering down through the leaf canopy caught my eye and I stopped to admire the artistry of their construction and to try to find their makers. Looking more closely I saw most of the webs were broken and apparently abandoned, although this one had captured a beautiful rainbow. 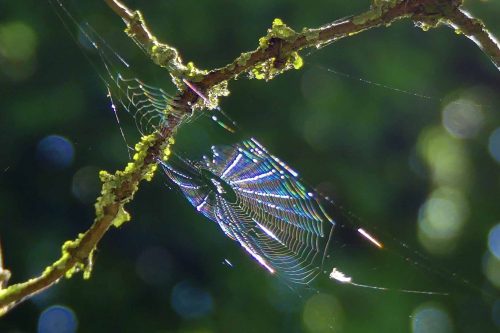 As so often happens, my slow progress and in this instance, last-minute change of route brought forth a magical few moments. Until now the only sounds had been mainly of the wind rushing through the trees, but I began to hear bird calls that got gradually nearer and suddenly I was surrounded on all sides by excited little birds – a travelling feeding party! I had been standing still and they seemed not to notice me; I’ve described a similar experience in a previous post and this was equally as joyous and uplifting. It was a large party too, impossible to count the numbers of birds within it as they scattered amongst the trees, but Blue tits were probably most numerous with at least a dozen Long-tailed tits; Great-tits were there too. I didn’t see Tree-creepers as before, but was thrilled to see a Nuthatch that chose to explore a tree right in front of me.

Taking photographs in the darkness of woods is rarely successful, but a Nuthatch did pause briefly from its foraging near a patch of sunlight, giving me a reasonable chance to record this bird for the first time here. Watching a tiny Blue-tit searching through ivy high up in another tree I realised it was looking for spiders, which are an important part of their diet. Perhaps the birds’ regular forays are the reason I couldn’t find any.

Back to the present

Sycamore leaf with spots of fungus

There was no feeding party today, but there were other signs of a summer ending. Sycamore leaves, amongst the first to break their buds in the Spring are amongst the first to change colour and fall. Most of those I see nowadays are marked with dark spots; this is Rhytisma acerinum, the Sycamore Tarspot. It doesn’t look attractive, but although it is suspected that the darkened areas reduce the photosynthetic capacity of affected trees, the fungus doesn’t seem to affect the tree’s health and vigour. One consolation of the fungus’ presence is that is shows the air here is fairly clean as it is apparently particularly sensitive to sulphur dioxide air pollution. Trees growing near to industrial centres with high levels of sulphur emissions do not show any sign of the leaf-blackening fungi.

If you look at the undersides of the fronds of most ferns, their seeds, spores or more correctly sori  are now ripe. The Male Fern is the most common fern found growing here; its sori are round and normally run in two parallel rows.

There’s a large patch of Hart’s Tongue Fern growing in damp shade on a steep bank. Its leaves and sori take a different form to those of other fern species. Their ripe sori accentuate the marks on the underside of the leaves and it seemed to the person that named the plant that they resembled the legs of a centipede, so he gave it the scientific name ‘scolopendrium‘, the Latin for centipede.

The track passes a sheer cliff of limestone. Its surface is frequently damp, sometimes wet and its base is covered with a lush, bright green shag-pile carpet of moss.

There’s a small grove of Silver Birch trees on this shady, damper side of the Bryn that are also beginning to lose their leaves, which stud the dark mud of the track with specks of bright gold.

Nearing the end of the path the trees thin and give way to scrubbier vegetation, mostly blackthorn and hawthorn. The blackthorn has beautiful purple sloes and its leaves too are beginning to turn colour. 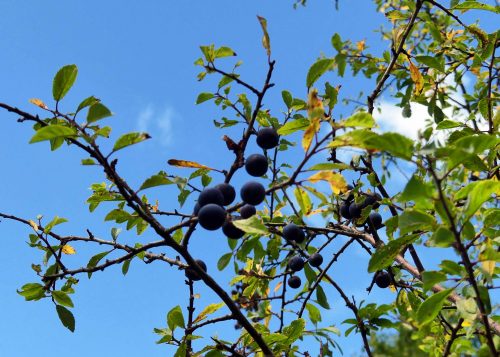 A number of the blackthorn shrubs here also have clumps of pretty grey-green lichens. Some looks like a tangle of moss, which I can’t accurately name. 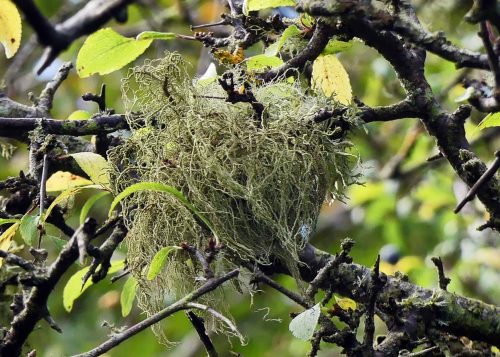 Other blackthorns have a lichen in a different form, this one, photographed on a nearby shrubby hawthorn tree with dark red fruits (haws), has the appearance of Reindeer moss, but I can’t yet be species-specific.

Emerging from cover onto the exposed summit I braced myself for another confrontation with the wind. The sun had disappeared behind clouds that were shutting out its brightness, leaving the landscape in shadow, dulling its colours. Part of the view across the valley from here takes in buildings and fields that belong to the Welsh Mountain Zoo, located above Colwyn Bay. There are sometimes interesting animals grazing in the fields; today it was some kind of cattle. 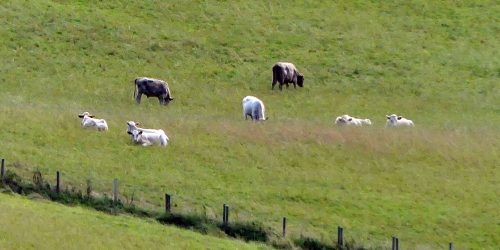 With or without sunshine I love this hillside view of small fields bounded with hedges and trees with the mountains in the distance. It reminds me a little of a David Hockney painting.

The mountains are topped with billowing clouds that permitted some sunshine through to lighten slopes here and there and to brighten the water of the river Conwy. 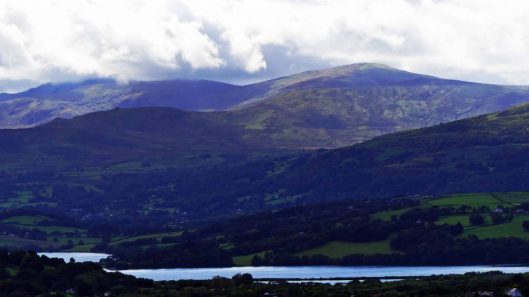 Daisies look delicate, but they’re tough little plants and flower more-or-less continuously from December to January. I love them so am happy they can decorate grassy areas in peace before the lawn-mowers emerge from hibernation. 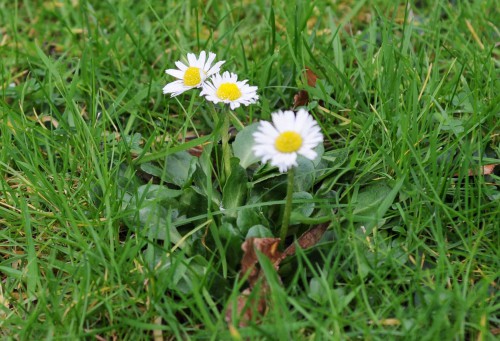 Celandines are one of the first heralds of Spring, but I was taken by surprise to find some this early in the year.

Herb Robert was also a surprise, its flowering season is more April-November, so this is probably a plant that has not died down and carried on growing. 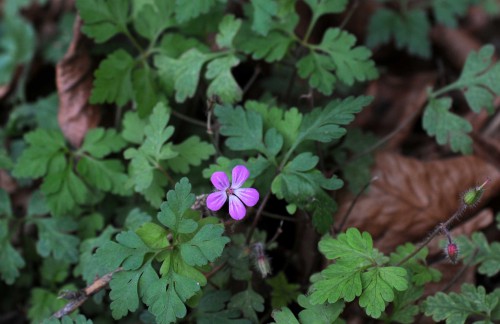 Another survivor is this Nipplewort which is growing in a sheltered corner against a wall on the roadside. 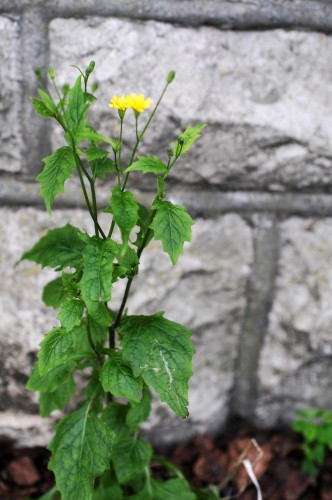 There are some wildflowers that are truly winter flowering. The bright green leaves of Winter heliotrope are present here throughout the year and the lilac flowers, which have a fragrant, vanilla-like scent appear from November to March.

January 26th was a mild sunny day, warm enough to coax out this little Red-tailed bumblebee, but it seemed to be struggling to take off from the flower, so maybe it wasn’t quite warm enough. 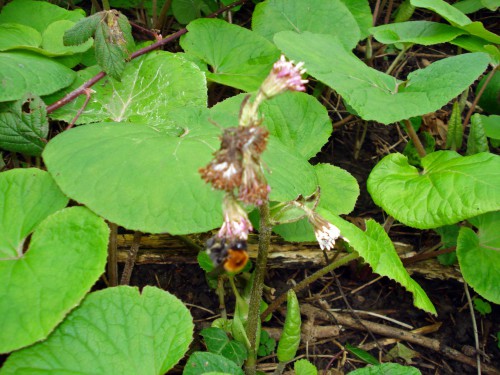 A red-tailed bumblebee on a heliotrope flower

Three-cornered Garlic is named for the shape of its flower stems, which are triangular. It is also known as White bluebell and does resemble one, until you smell it. It’s flowering season is February- June but has been in flower here since last December.

Flowers resemble those of the bluebell

“When gorse is out of bloom, kissing is out of season“. In other words, gorse pretty much flowers all year round to some extent. Now, at the end of this mild January many bushes are well-covered with the lusciously coconut-scented blossom.

Hazel catkins have also been present on some trees since last month.

A few trees have retained their dried leaves for some reason, this is a small oak.

A small tree has kept its dried leaves

Some plants characteristically hang on to their berries well into the winter, one such is the unfortunately-named Stinking iris that has bright orange berries

and another is Black bryony, whose bright scarlet berries garland shrubs like strings of shiny beads.

A surprising number of ferns are still green 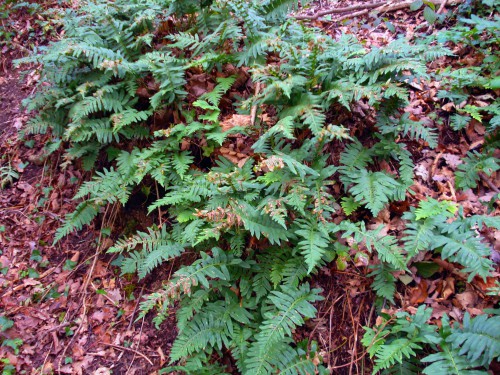 Both the Male fern and the Hart’s Tongue fern are semi-evergreen, but this group shows no sign of dying down at all. 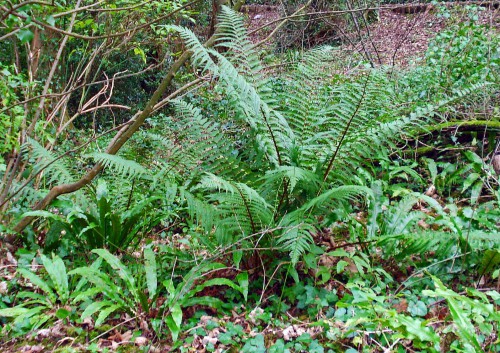 Winter is a good time to appreciate mosses. Looking closely at this one it has fern-like leaves.

A cushion of moss tucked against rocks

On a fallen Scots pine a colony of tiny bright yellow coloured fungi has established itself; it seems to be a bracket fungi, maybe a turkeytail?