In common with the rest of the country we  had a week of proper winter weather last week, although we have so far missed out on any snow. The compensation  for below- freezing temperatures was that for three days the skies were clear and the sun shone. The mornings are lighter earlier now and when I leave the house the air is full of the sounds of birds. The tides have changed too and by 8.30am the sea has receded and the rocky shore and beach are already busy with foraging birds. The daylight hours are gradually lengthening too and it is now staying light till just past 5pm; it’s amazing how much better that makes you  feel.

My drive back and forth to work follows the coast closely; the road runs alongside the promenade all the way from the far end of Colwyn Bay, through Rhos on Sea and reaching almost as far as the Little Orme at the end of Penrhyn Bay. It is a treat to have such a scenic journey, especially as each day brings a different view depending on the state of the tide and the light. It hasn’t been a great week  for getting out and about, so this week’s observations are a bit limited and have been made from the shelter of the car at points along the route I drive.

Saturday began cold with a light frost and by noon, where others were being snowed upon, we had some very cold rain instead. But whatever the weather, life along the seashore carries on pretty much as usual; birds simply have to eat. On my way home at lunch time I pulled in alongside the promenade at the Old Colwyn end  of the promenade to have a look at how the rain was affecting the birds. A few black-headed gulls are regularly perched on the railings here and as I stopped two birds obligingly flew in, probably hoping or some food to be thrown to them. One of them was well on his way to regaining his characteristic dark head plumage, looking a bit strange at the moment, but it won’t be long before he’s back to his handsome best. He was behaving territorially, squawking loudly at the approach of the other bird both on the ground and from the apparently desirable perch on the railings. 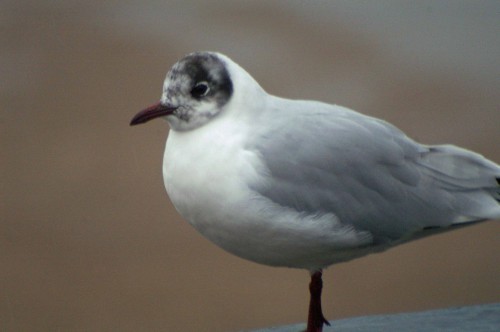 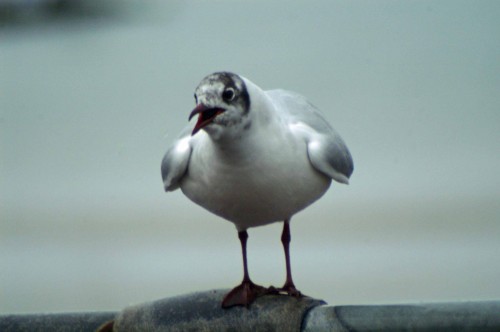 Black-headed gull squawking from his perch

Down on the rain-lashed beach a lone oyster catcher was  running around foraging, periodically probing the sand with its bill. It  found a mussel and scuttled off at speed. I don’t know what it was running away  from, it had the whole beach practically to itself. 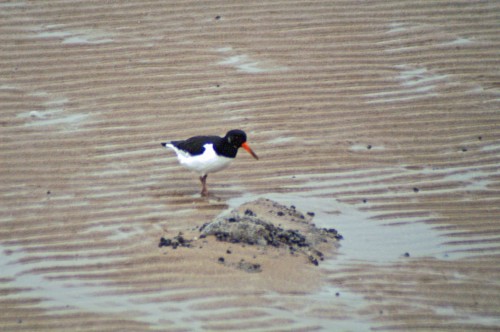 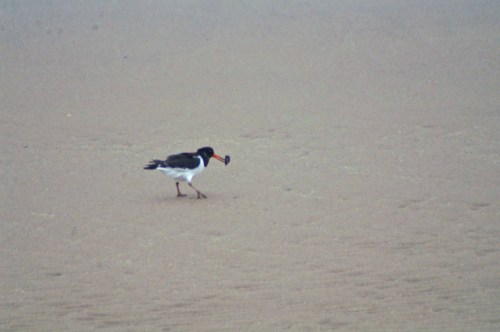 Crows are regular visitors to the seashore here and can often be seen perched on the railings and on the wall on the opposite side of the road or  foraging on the steep grass bank behind it. They have also learnt that the hard surface of the  promenade is helpful in breaking open mussel shells and they can be watched dropping the shellfish and picking them up repetitively until the soft body inside can be reached and eaten. 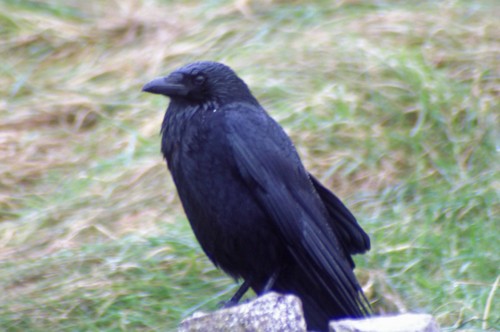 Crow sitting on the wall, hunched against the rain 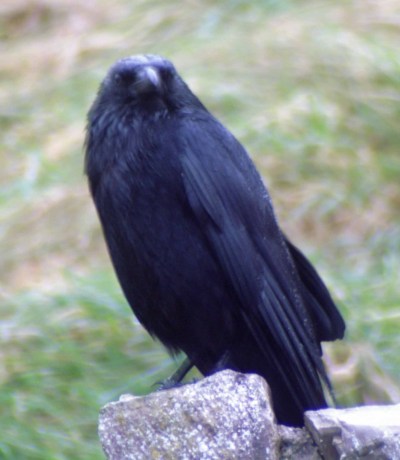 Crow looking down his beak at me

Herring gulls are master opportunists when it comes to  finding  food, and they too are often seen foraging on the steep grassy banks along the coast road.  It is only very recently that I’ve  noticed one or two birds ‘ foot-paddling’ on the ground, a technique gulls and some other waders use to bring marine invertebrates to the surface. It is  fascinating to watch the birds dance on the spot, rhythmically drumming the ground with their big webbed feet; it seems to do the trick too, the one I photographed pulled out and ate several earthworms as I watched. 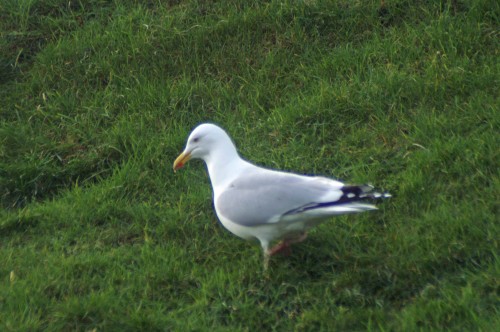 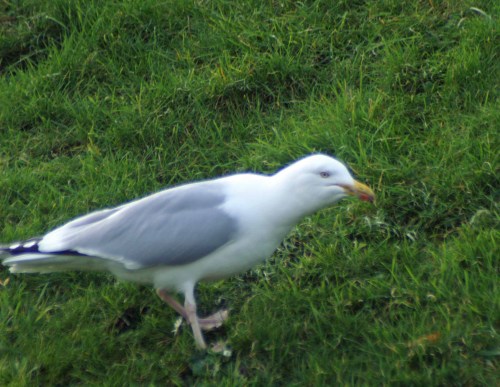 The Herring gull eating a worm