The male Bullfinch is surely one of our most strikingly beautiful and exotic-looking birds and a good sighting of one is always a treat, even if that does involve a certain amount of sacrifice of buds borne by your favourite fruit-tree. In the wild they tend to be more elusive, as despite their showy appearance the Bullfinch is a quiet, secretive character that usually spends its time among the branches and dense undergrowth of woodlands; often the only sight of one will have been a flash of a white rump retreating back into cover. Bullfinches are mainly sedentary or short-distance migratory birds and are relatively non-territorial, more likely to be seen in pairs or small family groups; they rarely flock as do other finches such as  Goldfinches and Chaffinches.

I’ve had some wonderful sightings of Bullfinches this year and I haven’t had to work for them at all as they have been from my kitchen window and courtesy the tree directly in front of that window. A female appeared first, back in February and I included her in a blog at the time. I had a couple of glimpses of her subsequently and hoped she had a mate somewhere close by.

My first proper sighting of a male was much later on in May when he visited to dine on the seeds of the tree directly in front of the window.

Based on that sighting and the species habit of not travelling far to find food,  I hoped that he was paired with the earlier female and that they were nesting  somewhere nearby. A couple of weeks later I saw him again and was able to watch him gorging on the tree seeds for a good few minutes; maybe the seeds were riper and more palatable. 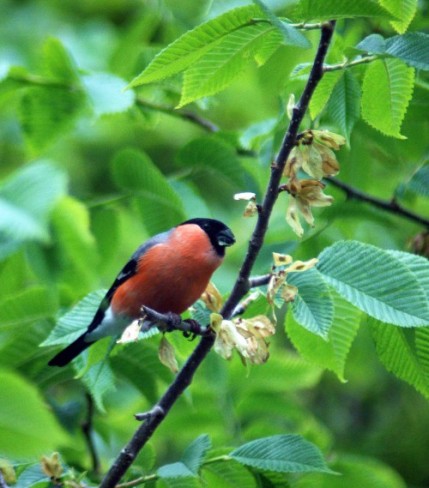 The Bullfinch most likely takes its common name from its shape, as they are plump-to-heavily-built and somewhat ‘bull-necked’. Both sexes have a stout grey-black bill, black wings, nape, crown and chin, and a white rump, under-tail coverts and wing-bar which are striking in flight. The tail is slightly forked and the legs are brown.

The adult male has a slate blue-grey back and a glorious deep rose-pink breast, belly and cheeks. The female has a brown back and  pink-tinged grey-buff underparts. The juveniles are similar to the adult female, but do not have black caps.

The song of this unobtrusive bird contains fluted whistles that is often described as sad or mournful. In Victorian times Bullfinches were a desired captive bird because of their beautiful plumage and call. It was believed that the caged bird could be trained to mimic music and it became a popular pastime to play a special flute to the bird.

Bullfinches usually nest in shrubs or bushes, such as blackthorn and hawthorn, in woodland, orchards, agricultural farmland or large gardens. The nest is a flimsy, loose structure of twigs and moss lined with fine roots and hair, which is built by the female. She lays and incubates eggs that are smooth, glossy and light blue with purplish markings at one end. The eggs are about 20 mm by 15 mm. Both parents feed the young after they have hatched.

In the late autumn Bullfinches range a little more freely foraging for food and feed largely on the seeds of herbaceous plants, but as winter sets in their attention turns to tree seeds, particularly those of the ash. In the spring tree buds, including hawthorn, blackthorn and sallow, as well as the buds of fruit trees, become the birds’ staple diet and it is this aspect of their lifestyle that in the past brought them into serious conflict with fruit farmers: a single bullfinch can easily remove 30 or more buds in a minute. 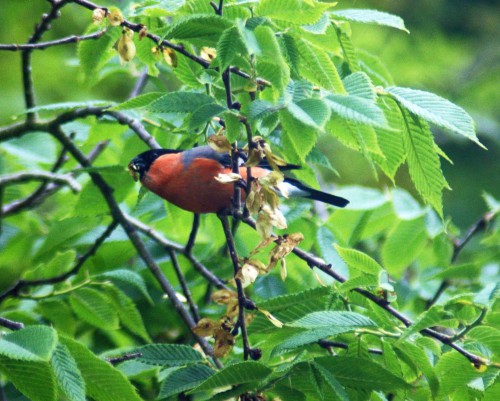 Not noted for its agility, the Bullfinch managed to reach and eat rather a lot

In the UK the Bullfinch is mainly a year-round resident, but many northern (Scandinavian) birds migrate further south in the winter when our British population numbers may be temporarily swelled.

Bullfinch numbers increased enormously in the 1950s which brought about a serious problem for Brtain’s fruit-growing industry. The birds’ dietary preference put them into conflict with commercial growers and thousands were killed each year. Although trapping and culling reduced the damage the fact that catches continued year after year showed that it had no sustained effect on bullfinch numbers. But then gradually, from the mid 1970s, bullfinches became scarcer again and catches on most farms steadily declined. 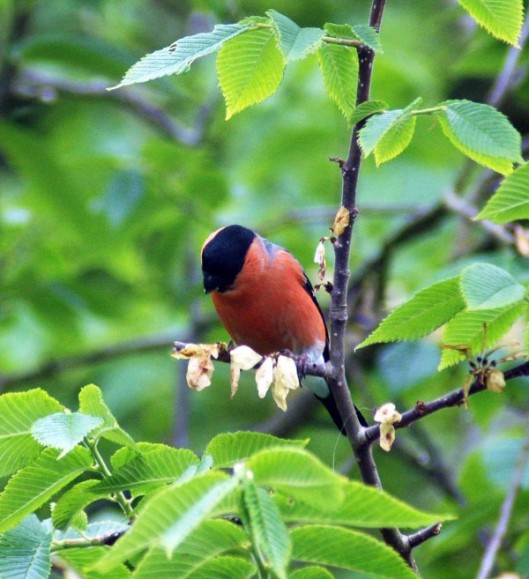 A good view of the male’s black cap and bill

Subsequently, the Bullfinch was a Red List species for many years as their breeding population had declined by more than half. This was attributed to a reduction in quantity and quality of woodland margins and hedgerows and increased grazing by deer. However, their numbers have recovered once more (and continue to do so) and they are currently classified in the UK as an Amber List species under the Birds of Conservation Concern review.

There are several theories as to why the Bullfinch is so called. Most favour the bird’s shape as the key, but there is also the possibility it may once have been a ‘bud-finch’ referring to its Spring feeding habits and to the time of year when the birds are their most visible.

“W. B. Lockwood feels that the explanation for the name (Bullfinch), which in medieval times was simply shortened to “bull”, ‘remains elusive’. Yet one cannot help thinking that the bird’s globular bill and neckless rotundity are the key. As in ‘bulldog’ or ‘bullfrog’, the name was intended to convey the creature’s front-heavy – literally bull-headed – construction.”

But Greenoak also gives as other British names: