In the meadow the grass is long and beginning to turn golden brown as it sets seed.

The meadow grass is long , brightened by patches of yellow Lady’s Bedstraw 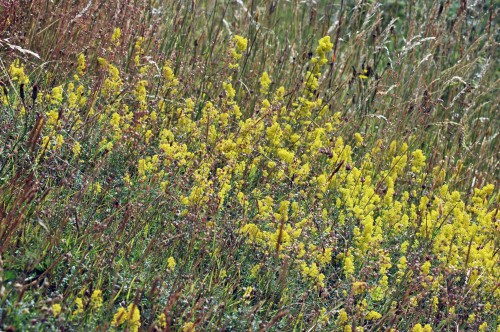 At this end of the field there are more brambles and I spot several dark brown butterflies flying low down along the length of them. It was a while before any settled for long enough to see properly what they were. As I hoped, some were dark, chocolatey brown Ringlets. 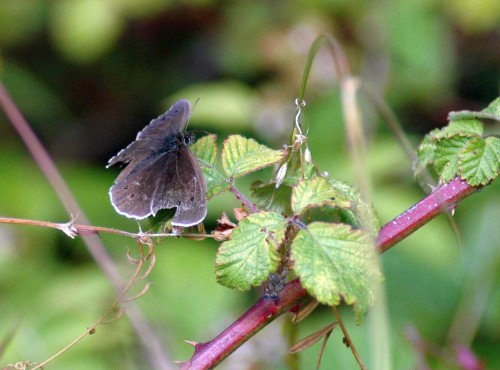 One Ringlet male was clearly patrolling a territory. The brambles fill a corner of the field; he was flying to one ‘end’ of the patch, turning around, flying to the other end, then where the bramble curves around the corner he cut across to the other side of the track, flitted a short way through the long grass then back across the track to the brambles. Occasionally he paused for rest or to skirmish with intruders.

As well as Ringlets there were Meadow Browns, some of which were also coloured dark brown, hence my initial hesitation identifying the Ringlets. It’s quite unusual to see Meadow Browns resting with their wings fully open and it is interesting to see how variable this species is in size and colouring. 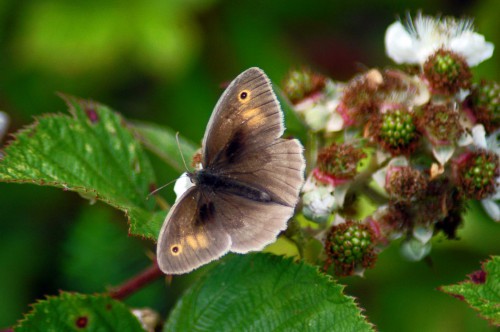 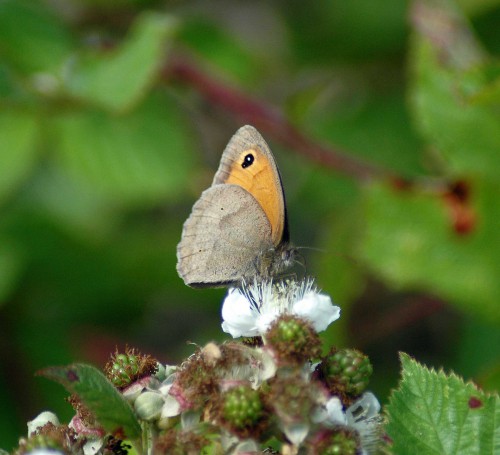 I was pleased to see a lovely fresh Gatekeeper here too, my first one for this year. This one was a male;  he has dark scent scale patches in the centre of the forewings which females don’t have.

In the opposite corner of the field there are more brambles; there were more Meadow Browns here and little golden brown Skippers that happily are abundant here and that also occur in other nearby locations, particularly on the Little Orme. 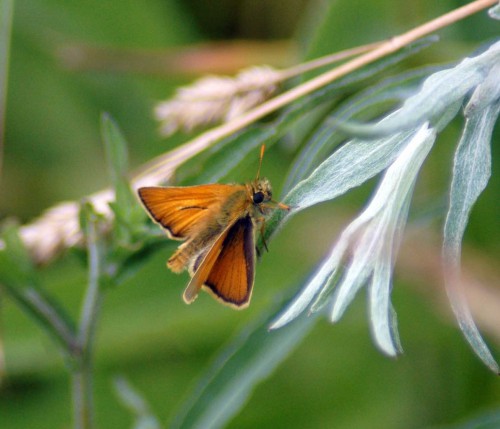 There were a good number of these lovely little butterflies flitting about, expertly manoeuvering at speed between the long grass stems.

Ringlets are not widespread throughout the site, but rather occur in colonies in a few different locations. I walked on up past the top end of the field where I have found them in previous years, again on brambles. I was pleased to see there were; maybe half a dozen individuals, mostly flying around in the long grass in front of the brambles. Finally one flew up to feed on one of the last remaining flowers.

Ringlet feeding on the last of the bramble flowers

I was wondering what there was for the butterflies to feed on here now the bramble flowers are over, then saw one fly up onto a nearby oak tree. A closer look revealed it appeared to be feeding on something on a leaf surface, or maybe there were a few drops of moisture there.

Last year I didn’t see any Ringlets at all, perhaps I missed their rather short season, which is just July-August, or maybe there were only a few which I overlooked. As they are here now there must have been some to generate this year’s brood. Now I wanted to know if there were any to be found in yet another spot I found them in the year before last, which is at the bottom of the ‘downland’ slope that leads up to the summit of the hill. Happily, there were indeed some there too. So, a good year for Ringlets.

Emerging from the woodland onto the steep slope I had caught sight of a flash of orange flying over a stand of Rosebay Willow Herb, so headed off now to investigate that. It wasn’t long before I saw more orange flashes of speeding Dark Green Fritillaries, the most special butterfly treats of this reserve. This patch of the hillside and sometimes a spot on the other side of the hill are the only places I have seen them, Colonies are more plentifully populated some years than others.

The fritillaries were feeding mainly on thistles, for want of anthing much else. They would also feed on knapweed, but it’s not quite out yet and scabious, of which there is only a little flowering nearby.

There were perhaps 10-12 individuals, some faded, others much fresher. 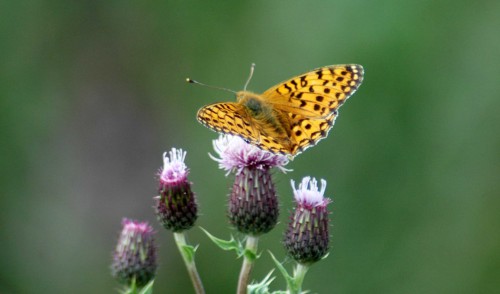 They are strong, fast flyers and glide on flat wings.

I almost always begin my walks within this site with a meander around the edge of the grassy area in front of the car park, both of which are located on the bottom of what was once a quarry. The old excavations have left the small field sheltered by limestone ‘cliffs’ on two sides and it is bordered on all sides with trees, mostly ash and sycamore. Along one long side there is a border of mixed shrubby and herbaceous vegetation creating a stretch of my favourite habitat; woodland edge.

The wildflowers that grow here are not spectacular and tend towards the robust end of the plant spectrum, but they support a diverse number of insect species so are great hunting grounds for the likes of me, armed with a camera. There’s plenty of hogweed here, already featured in the last post, then there are nettles, dock, the sticky green cleavers or goosegrass and new this month, the magenta spikes of Hedge, or Wood Woundwort. It often grows in the company of nettles and having similar leaves it blends in with them until the flowers show; the photograph below shows both plants.

Growing in hedgerows, on woodland edges, roadside verges and various shady places, Hedge Woundwort is not a particularly stand-out plant as far as its looks are concerned. A member of the mint family, Labiateae, it has a distinct aroma, one of those that is hard to describe, but which most wildflower guides refer to as ‘unpleasant, particularly when crushed or bruised’. I must have a strangely developed sense of smell; maybe as a result of working with essential oils, but I don’t find it offensive at all.

A brown-lipped snail was hiding under a dock leaf

Brambles are often a component plant of the woodland edge flora. They are  flowering now too and are also sought after by a wide variety of insects. 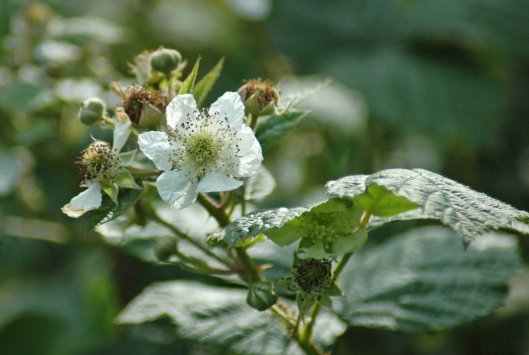 From the field I walked up the steps following the ‘woodland trail’, making a diversion around the border of another meadow area. I stopped at a spot where there were several brown butterflies fluttering around amongst the long grass and shrubbery. My first assumption was that they were Meadow Browns as I’m used to seeing them throughout most of the site at this time of year, but stopping to watch properly I realised that although there were Meadow Browns there, most were actually Ringlets.

The Ringlets were very mobile and fluttering around mainly within the stems of the long grass, as they characteristically do. On the occasions when one paused in its circuiting to take nectar from bramble flowers or to rest low down on a leaf or grass stem, the insect would either be obscured by grass stems or disturbed by the dive-bombing of another butterfly or a bee. I waited patiently for ages, just watching them until I got the opportunity to grab a shot of one on bramble leaf. It posed nicely, but turned out to have chunks missing from its wings, poor thing. 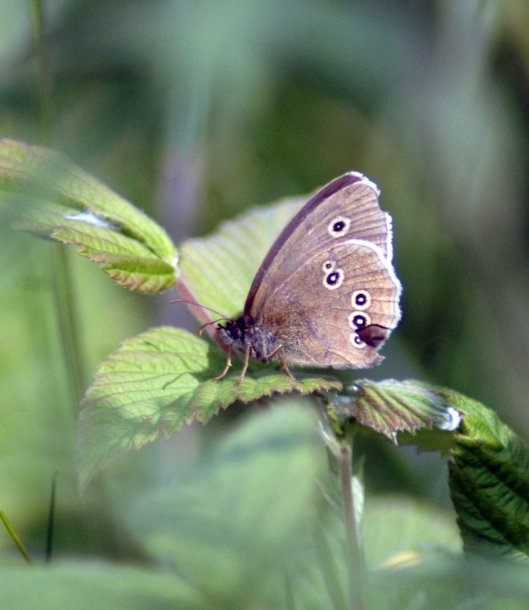 I wasn’t giving up now though, and standing around in the warm sunshine in this peaceful spot, surrounded by lush greenery and time to watch the insect world go by was not exactly a hardship. Every now and then the butterflies disappeared from view for a few minutes, most probably touring another part of their territory, but while waiting there were other insects to watch. One particularly interesting performance was provided by three hoverflies. The two smaller ones were hovering around and bothering the larger one on the bramble flower; two males competing for the attention of a female who eventually got tired of them and saw them both off. The hoverflies are of a small Eristalis species, but the photographs aren’t good enough to determine which one.

Another chance of a Ringlet arose, this time a perfect subject, but a bit further away and hiding its head and body behind the bramble’s stamens. I got the ring pattern this time though. 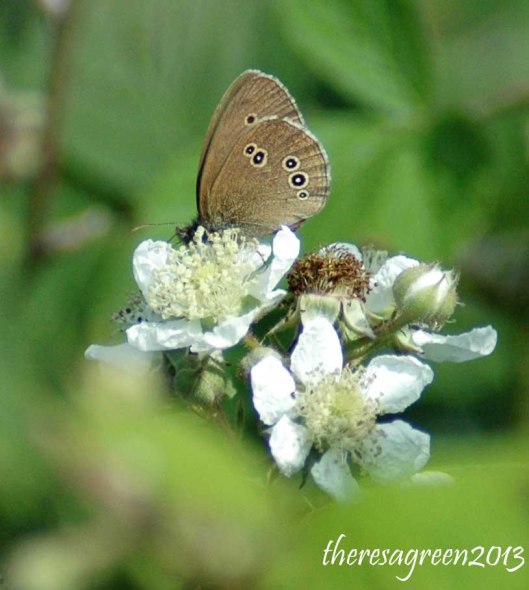 Standing around in the direct sun was starting to get uncomfortable, so I left the Ringlets to their chasing to find a bit of shade. As luck would have it I soon came upon more of them and one posed beautifully on a bramble leaf in the dappled shade of an oak tree.

The rings on the hindwings give this butterfly its common name and make it unmistakeable when seen at rest. The uppersides are a uniform chocolate brown that distinguish this butterfly from the closely-related Meadow Brown that can often be found flying within the same areas. A newly-emerged adult Ringlet is a surprisingly beautiful insect, the velvety wings providing a striking contrast with the delicate white fringes found on the wing edges. The dark colouring also allows this butterfly to quickly warm up – this butterfly being one of the few that flies on overcast days.

The Meadow Brown also has a dark brown upperside, but eyespots are ringed with orange

Dog Rose – another shrub often found on a woodland edge

Walking out into what is effectively a large clearing in the woodland I came upon another two butterflies, one a rather faded female Common Blue, the other a much fresher Small Heath. 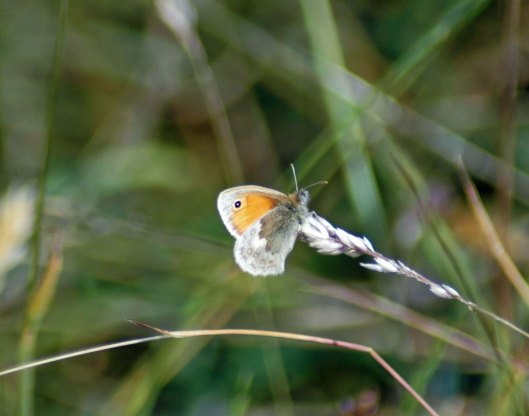 A surprise find here and a pretty note on which to end this section of my walk was a single Pyramidal Orchid, the first one I’ve seen here on Bryn Euryn.