Located on the eastern side of the Estuary of the river Conwy, this reserve is a perfect example of how a once industrial site can be reclaimed by and for nature. The reserve  was created in the early 1990s from material dug out from the estuary during the construction of the A55 road tunnel that passes under the River Conwy to bypass the historic town of Conwy. The reserve also incorporates mudflats and saltmarsh, part of the Afon Conwy SSSI, important for migratory waders including curlew, oystercatcher and redshank.

I was meeting up with friends this morning and arrived a few minutes early, so I pulled into the parking area in front of the estuary to admire the views across and along the sands and mudflats of the estuary of the River Conwy. This is the eastern side of the estuary, so firstly looking north there are perfect views of Conwy Castle and town with Conwy Mountain behind it.

Most of the land on the opposite western side of the estuary is within Snowdonia National Park. To the south is the town of Glan Conwy. 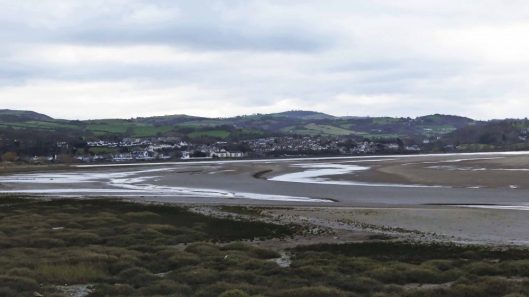 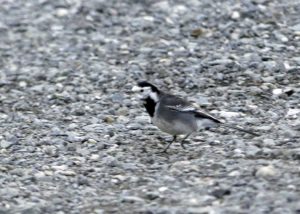 A Pied Wagtail scuttling over a patch of lime chippings was my first bird of the day. 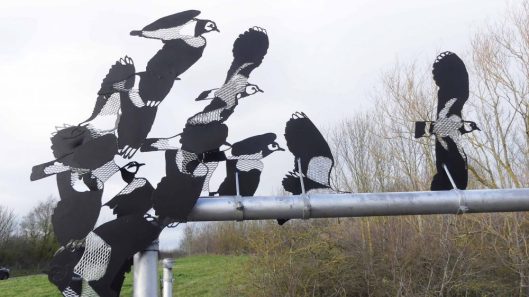 A flock of metal Lapwing adorn the entrance to the Reserve

As you enter the Reserve there is a man-made mound in front of you that acts as a vantage point from which to get an overview of the site. Circular walks have been created that pass through a variety of habitats such as reedbed, young woodland, grassland and scrub.

There are two lagoons, originally created to hold the sludge from the tunnel excavations; one holds shallow water while the other is much deeper, both of which attract waders and waterbirds, especially from August to March. The lagoons are filled with fresh, not tidal water and are dependant on winter rains to fill them. If they ever need to be topped up, water is taken directly from the nearby river, the Afon Ganol. Islands have been created within them providing havens for roosting and nesting birds. These are best for birds at high tide, when the river covers the mudflats pushing waders to roost and feed on the islands. 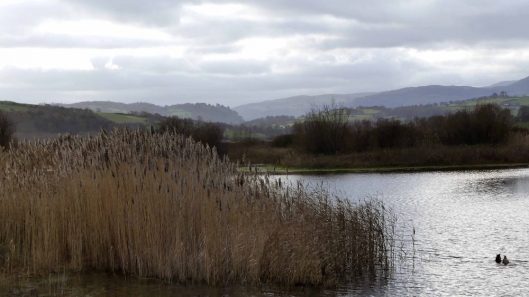 At low tide, as now, there are not as many birds to see as there may be when the tide floods back into the estuary, but our first sighting gave me another duck species to add to my list of ones I might recognise when I see them again. We worked out these were a pair of Gadwall, which are quite understated in their appearance, not colourful or flashy, but quite common so likely to be seen again. 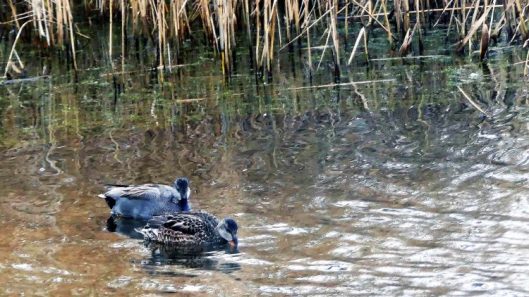 11:19-The sun shining through a break in the clouds momentarily created a darkly dramatic, almost monochromatic view of the lagoon and the distant mountains.

We moved on and followed the boardwalk that wends through the reedbeds. Water Rail are resident here and sighted fairly frequently, so we were listening out for their distinctive calls, but all was quiet. We admired the surroundings instead; the dried reed stems glowing golden in the sunlight and reflected in the clear water of the well-filled pools are a beautiful sight.

11:19- A Coot cuts purposefully across the wind-rippled surface of the lagoon temporarily disrupting its pattern.

11:21- A pair of Mallard occupy on the end of a grassy island, the male standing watchfully over the resting female. 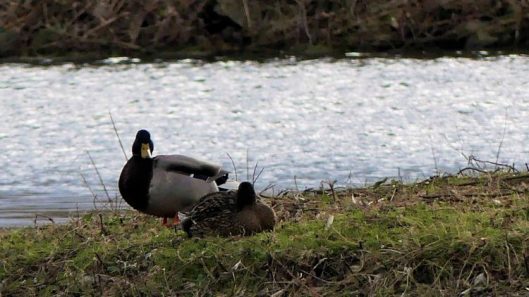 11:29 A Mute Swan glides across the water, wings raised.

11:30- A minute later the peace is shattered as another suddenly rears up in the water with a great deal of splashing and drama and sets off in pursuit of it.

The first Swan turned and travelled away as quickly as it could towards a narrow grassy island, the other in close pursuit and catching up just as it reached the edge of the spit of land. 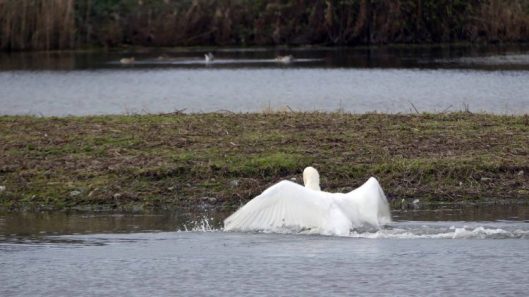 The pursuer heaved himself from the water and on top of the other, which we now realised must be a female, his weight almost forcing her beneath the water as he positioned himself to mate. Mute Swans mate for life, so we couldn’t be sure if this was consensual or whether the female had been trying to escape or hoping to get onto the firmer ground of the island or just the shallower water at the edge of the island before she was caught. Either way it didn’t look like much fun for her.

Although it all took place in little more than a minute or so, the activity attracted the interest of another individual who sailed up close to the mating pair, its wings raised.

The mating male turned to face the intruder, rearing himself up with the poor female still pinned beneath him and the other mirroring the movement, stretching its neck up towards the other.

Was this a victory display? 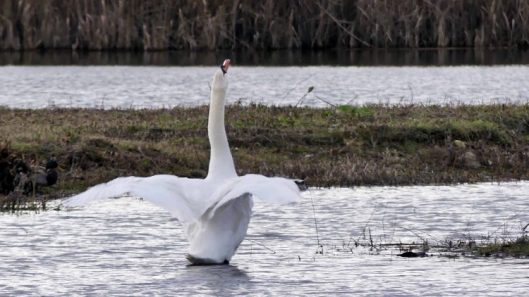 Whilst all this had been going on a black and white duck had been unconcernedly carrying on with the business of searching for food nearby. It was tricky to follow as it spent much of its time below the surface, bobbing up only briefly before dipping down again. I managed only one quick snap of it, fortunately good enough to be identified later on by one of the staff volunteers as a male Goldeneye.

He also identified another mostly brown duck that had been behaving similarly in the water in front of the hide, as a female Tufted Duck. 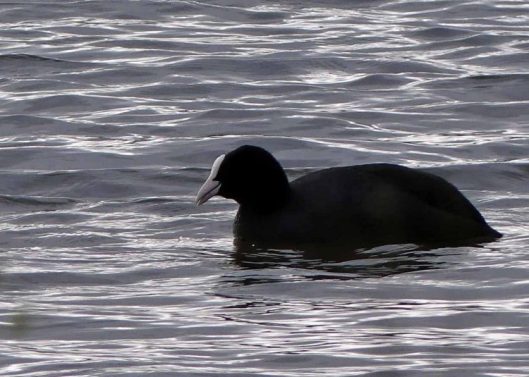 11:38 – We got back out onto the path and turned off to head towards the eastern edge of the Reserve as indicated by the Magpie that landed on the signpost. 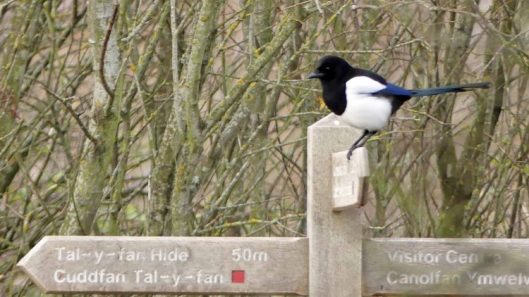 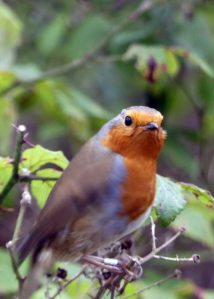 A short way up the path we spent a few minutes being completely charmed by a close encounter with an exceptionally confiding Robin. He, or she, sat on the tip of a bramble stem at the edge of the path, tilting its head to look at us. I think if we had been able to offer it food it may have come to a hand to be fed. 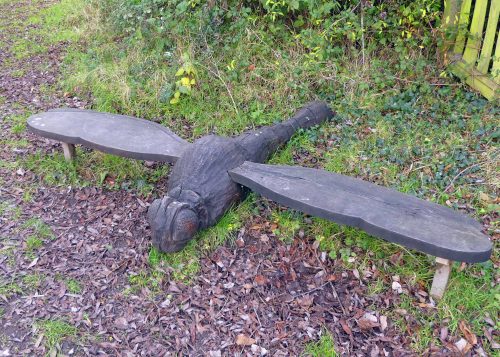 We reached the gate that gives access to the fenced area of wilder scrub vegetation.

This path leads to the Estuary edge.

To the left of the path in a dyke below us, a small party of Teal travelled slowly upstream, stopping frequently to feed.

The bright light and shadows weren’t helpful in showing off the real beauty of the little male, so you’ll have to trust me when I say he was looking splendid in his bright breeding colours.

The female may be brown, but she has her own subtle beauty in her brown-shaded plumage, with each of her feathers edged with white.

A trail of freshly deposited poo on the path finally led us to the Carneddau mountain ponies that roam the southern section of the reserve where they graze down unwanted vegetation. They will happily munch on brambles, reeds and rushes as well as grass,  which they keep short creating the habitat needed by a wide variety of wildlife.

The sun came out again as we got to this spot, lighting up the Castle and Conwy Mountain behind it.

The bright sunlight also rendered birds feeding on the Estuary mud as silhouettes, most of their colour hidden in shadow. Shelduck are distinctive in size and shape though, and in the way they dip their heads to ‘hoover’ the ground in front of them.

The Shelducks were behind a large flock of foraging Redshank. The buildings in the background are in the village of Glan Conwy.

There were more along the edges of a channel of water 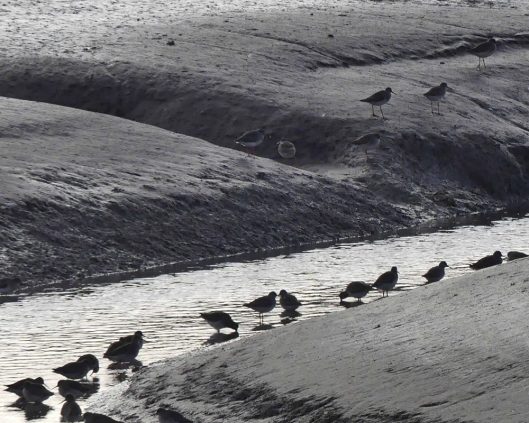 A few higher up on the bank made it possible to distinguish their diagnostic orange-red legs.

A solitary Little Egret stood stock still on the mud gazing intently out over the Estuary. Perhaps waiting for the tide to turn and bring in fresh food. 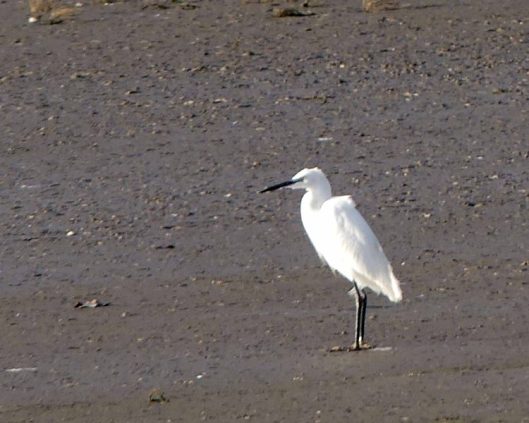 A surprise was this large patch of Sow-thistle in lush green leaf and in full bloom.

A view back into the reserve gave us Canada Geese, Mallard and a Goldeneye male, maybe the same one we saw earlier.

And on a narrow rock-strewn island in front of a hide, one of the iconic birds of the reserve, Lapwings. 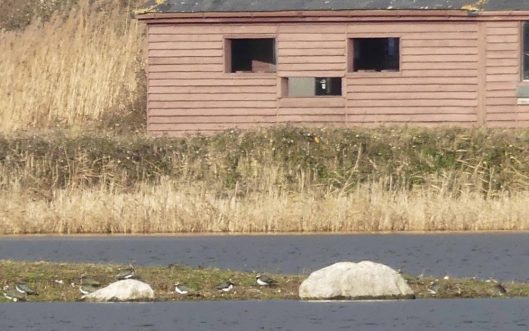 They were too distant from where we stood to see them well, but just a few moments later as we continued to walk, something had disturbed them and the whole flock was up in the air.

There is another bird visible in the photograph, but it’s too small and distant to make out whether that could have caused the disturbance. Whatever the cause, a flock of Lapwing flying is always a lovely sight and particularly so today as the sunshine caught the white undersides of their wings turning them silver. Mesmerising.

Back down to earth and a much less glamorous sighting of a Dunnock gave us our final sighting. It had fluttered in front of us, giving the impression of something a bit more exotic – we’d been keeping an eye out for Brambling – but it was a nice sighting none the less and didn’t let us stopping to stare at it put it off having a little snooze in the sun. 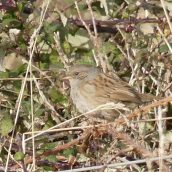 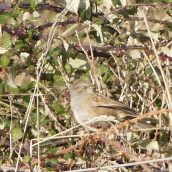 The path leads back to the gate at the parking layby I mentioned at the beginning of the post that marks the boundary of the Reserve.

It too is embellished with Lapwing images. 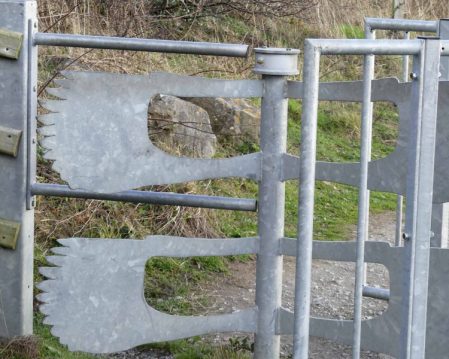 I thought I’d finish as I started, with another view of the Castle, now lit by the sun before we headed to the café to thaw out with soup and a cup of tea. 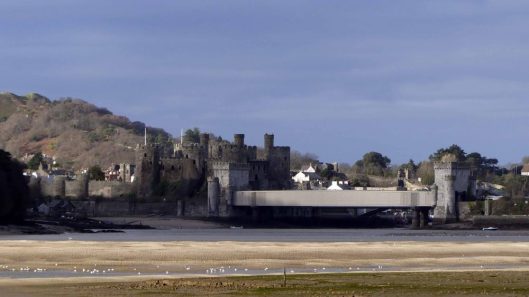 Thanks to Jill, Pete and Christine for an enjoyable outing on which to end 2018 and a Happy New Year to everyone that reads this!