Just in case you hadn’t noticed, we are currently experiencing the aforementioned Blackthorn Winter! At least we are in North Wales where the past week or so has been cold, some days extremely windy and we’ve been doused with heavy showers of cold rain and hail. I’m glad I got out for a couple of lovely walks to see some of the newly emerged wildlife before the weather changed. Before getting onto the walks and staying with the Blackthorn theme, I wanted to share this photograph that I took from my kitchen window. This was the first Spring sighting I had of a female Blackcap checking for anything edible on Blackthorn blossom. I have no way of knowing if this is the one that stayed with us over winter or a newly arrived migrant, but either way she brightened up a dull morning.

At this time of year I can’t imagine there being a better place to walk than in woodland, where so much is happening everywhere you look.

I didn’t have to walk far before starting to see hoverflies; lots of bright shiny new ones, some seeking pollen and nectar, others basking on leaves soaking up the sunshine. There were a few Bumblebees about, big Red-tailed and Buff-tailed queens mainly, flying low over the undergrowth, some maybe seeking nest sites and others beginning to stock theirs with provisions for the next generation of working daughters. 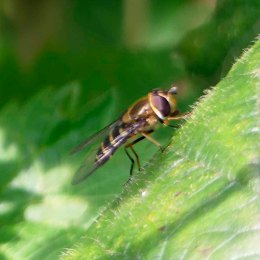 One of many similar hoverflies

I’d forgotten this tree was a lovely blossoming one; there were a few Bumbles visiting it but none stayed still for long enough for me to see what they were.

Cherry Laurel was still in full bloom around the middle of the month but going over towards its end. 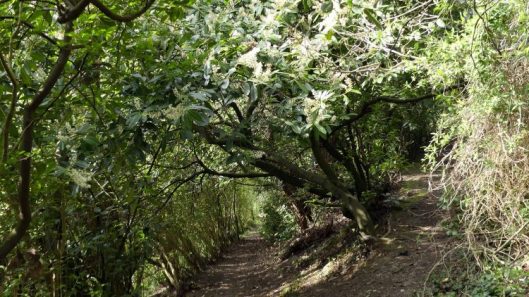 Greater Stitchwort is one of my favourite Spring flowers, 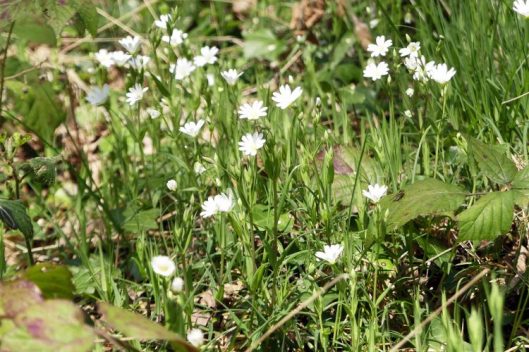 the small starry flowers are the perfect size for the smaller hoverflies and they seem to suit the furry little Bee-flies too – they don’t have to land on flowers, they simply hover in front of them and use their long fixed proboscis to suck up nectar. 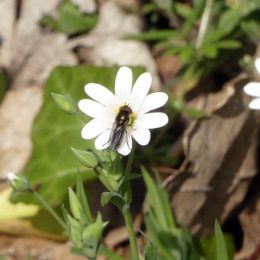 There were a good number of small black hoverflies about too; in the sunlight you can see the silver-grey markings on their long bodies through their dark wings. They were a species of Platycheirus, perhaps Platycheirus albimanus, or White-footed Hoverfly 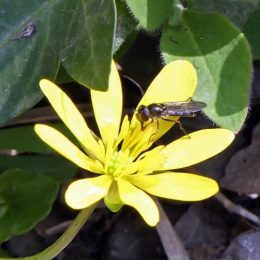 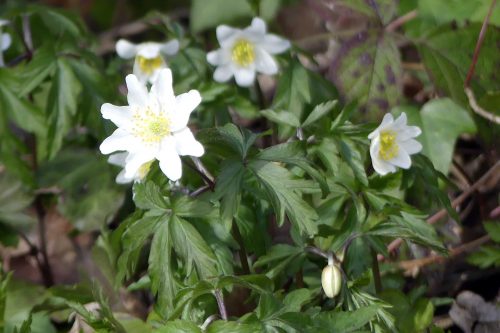 and a few Bluebells have already opened 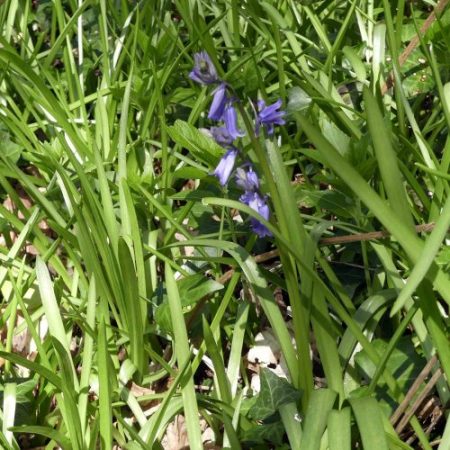 If you’re a fairly regular birdwatcher then you most likely know that when you hear birdsong or sounds that you don’t recognise, they’re very likely to be coming from a Great Tit! Apart from their recognised ‘teacher-teacher‘ song they have a whole repertoire of other whistles and calls but I still often find myself caught out, scanning branches looking for the source of unrecognised calls and finding once again it’s yet another.  It happened today, it took me a while to locate this trickster up in a tangle of twigs but when I did he gave me a look then turned his back and carried on singing.

His black markings are particularly strongly, especially around his rump and I’m sure I’ve photographed him this past winter from my kitchen window; he’s quite distinctive and I’d say within range. 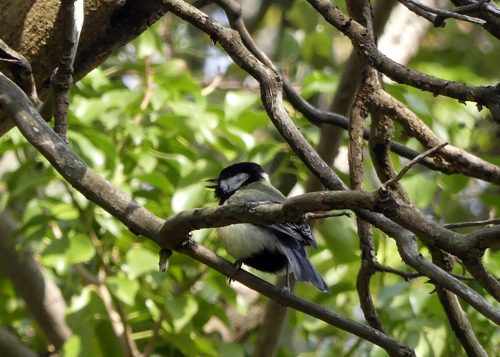 As I stood watching and listening to him I heard another, louder whistling call that I hadn’t heard in a long while, but recognised as the calls of a Nuthatch. It sounded close by but I’m not the best at pinpointing where bird sounds are coming from so I edged slowly along the path trying to stay behind trees where possible hoping to see movement. I could hardly believe my luck when he flew onto a tree branch leaning at almost a 90° angle and just high enough above me to see most of him. He put on a wonderful performance, moving first to stage right, lifting his head and stretching his neck skywards, then opening his beak wide and putting his whole self into his song. He repeated this several times, then stopped, had a little rummage about then turned, moved to stage left and repeated the act facing the other direction. I felt very privileged to be his audience and thanked him as he flew off down into the inaccessible lower slope of the woodland.

This all took place close to the boundary with the open field beyond it, so I looked over as I always do, hoping one day they’ll be something there to see, but again not today and the view was obscured by mist too.

There were more wildflowers to see alongside the path though, a few blooms of dainty Wood Sorrel and Common Dog Violets. 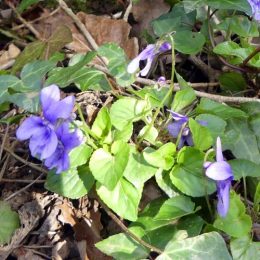 Mid month the Blackthorn on this part of the trail was still in bloom, Gorse was fully out as was the pink flowering currant.

I have learnt to approach this area, one of my wildlife ‘hotspots’ with care as you never know what might be there. Again, mid-month I saw this lovely Long-tailed Tit with a large fluffy white feather in its bill, so nest building must have already reached the final lining stage. I guess she may be sitting on eggs by now.

This is a spot favoured by beautiful Comma butterflies too and moving on from watching the Long-tailed Tit, I disturbed one from its basking on the bare ground of the track. It flew around for a while, had a bit of a scuffle with another that appeared from the other direction, then settled on the Blackthorn to resume his sunbathing. 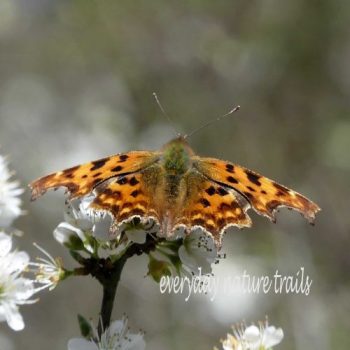 There were quite a few hoverflies feasting on the blossoms too, mainly yellow and black ones which are species of Syrphus, One or two drone flies and more of the little Platycheirus.

The next-door Gorse had a few visitors too, but the richly coloured and scented flowers never seem to attract as many insects as I think it should.

Down below, I watched one Hoverfly on the bare earth seemingly sucking up something- minerals or maybe just moisture? Others rested basking on leaves soaking up warmth.

And every dandelion flower had at least one diner.

There’s a ‘shortcut’ up to the lower meadow and at its junction with the Woodland Trail white Sweet Violets grow. The plants have spread well over the past few years and although their leaves and flowers tend to get splashed with mud they are still a pretty sight.

There are Common Dog Violets nearby too

At the top of this steeply sloping track I heard a Robin singing and located him in a Blackthorn that has become a small tree; its blossom is still mostly in bud. This area on the corner of the open meadow is definitely a Robin territory and is well guarded. Last time I passed by there were two birds, one either side of the track and one loudly expressed their disapproval at my intrusion. 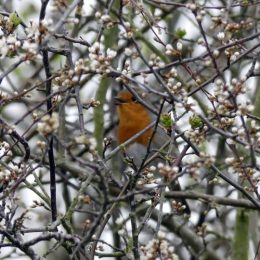 The ‘official’ entrance to the meadow, gained via the steps is close by in the opposite corner and I walked around to see the progress of the Cherry Plum tree. There were still a few blossoms, but now the leaves are well grown and a beautiful fresh green.

Gorse on the field edge is smothered in golden blossom, of course I had to walk over to it for my ‘fix’ of delicious coconutty perfume. I wish we were equipped with a scent recall sense!

There was  more to come along the Summit Trail, but to finish here, the first of the Cowslip flowers had appeared, but still bent over shyly hiding their tiny faces.

9 thoughts on “Before this Blackthorn Winter”