“The perfect spot for sunbathing, in a peaceful woodland edge location, offers privacy and safety in which to relax or indulge in some leisurely preening. No charge for use of facilities”.

This summer this ideal location, set conveniently for me just a few metres from my kitchen and bedroom windows, has been a popular spot with some of the local birds, particularly some of the younger ones.They come to make the most of this sheltered sun-trap to sunbathe, also known as ‘sunning’ in application to birds. Sunning birds may become so absorbed in the activity that they are easily approached, which can make them vulnerable to predators. They are safer here; there is no easy access to this spot from any angle, although a savvy Sparrowhawk may possibly be able to make a strike if it got its timing right so as not to cast a shadow. 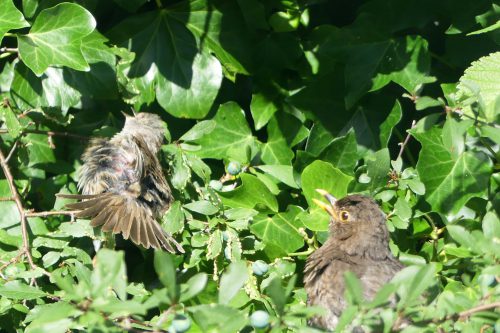 Dunnock and Blackbird sunning together

Most commonly we see Blackbirds and sometimes Robins sunning in gardens , but other species indulge too in slightly different ways.

Sunbathing Blackbirds are a fairly common sight in parks and gardens

To begin sunning, birds orient themselves to expose the maximum amount of their plumage to the sun. The classic sunning posture is thus: head and body feathers are fluffed up and out and depending on available space and/or sense of security felt, one or both wings are held out from the body with feathers spread; the tail is sometimes fanned out too. The bird may keep the same position throughout a sunning session, or it may change positions to expose different parts of its body to the sun.

Sunning is often a precursor to preening, vital to a bird’s feather maintenance, and in this instance it is thought this has two effects; one is that the sun’s heat helps to spread preening oil across the feathers. The other is that it drives out parasites from within the plumage that can then be more easily dislodged as the bird preens.

Sunning and Preening demonstrated by a Dunnock

I’m fairly sure this session was more concerned with pest control than anything else.

Firstly, adopt the sunning pose: fluff out feathers and spread tail and wing feathers. Well, alright just the tail feathers will do for now.

Some areas such as the head and around the eyes and bill can only be serviced by extending and lifting the leg and having a good old scratch. 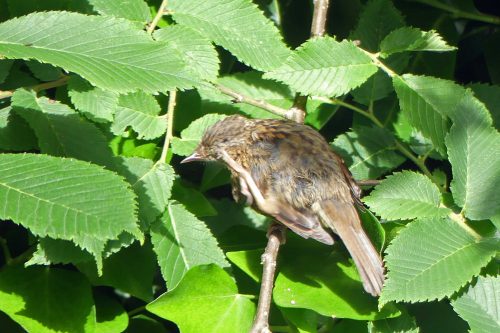 It helps to have a flexible neck.

That will have to do for now, it’s getting a bit shady here.Time to go.

The young Robin in the following sequence of images seems to be similarly afflicted with ‘lumps’ apparent on its neck. 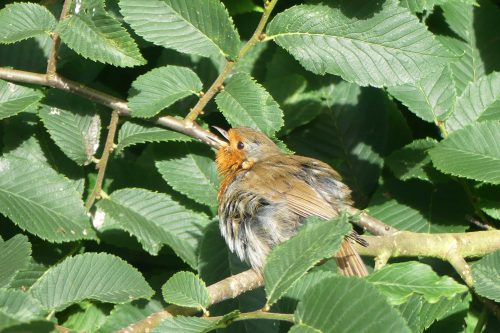 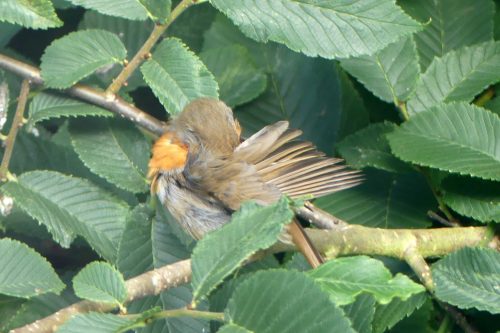 The head and neck are areas birds are unable to reach with their bills and have to scratch with a foot.

The other side needs attention too.

It looks as though the bird’s frantic scratching has created a bald spot. And is that another lump under its eye?

During sunning sessions birds often have their bills open. This is because the warmth of the sun raises their body temperature and as they can’t release heat by perspiration, they have to regulate it some other way, so will gape and sometimes pant in order to lose heat.

To sum up, no-one knows for certain the reasons birds sunbathe, although several theories have been proposed.

A tiny Wren enjoying a quick sunbathe on a laurel leaf

10 thoughts on “A Secluded Spot for Sunbathers”