Ravens once scavenged on the streets of London and other British towns and cities, but were gradually pushed further and further away to the west and north of the country, until the majority of those remaining were residing in the mountains of Scotland and Wales. At one time, due to persecution, their numbers were  reduced to around 1,000 pairs and they became birds much associated with upland wild places. However, the ravens fortunes have turned and over the last twenty years their numbers have increased dramatically and they have repopulated much of Britain, including some urban areas. There are now over 12,000 breeding pairs.

Newborough  forest  on the Isle of Anglesey is famed for its huge raven roost, where up to 2,000 birds have been recorded, making it the second largest raven roost in the world.

Ravens are also found around the Welsh coast, where they nest on sea cliffs. In my local area of North Wales we are lucky in having a resident breeding pair on the Little Orme and for me, a visit there is not complete without seeing what these charismatic corvids are up to.

The raven is Britain’s largest corvid (crow). Plumage is black and highly glossy in appearance, with bright sunlight bringing forth purple and green highlights; the tail is wedge-shaped. The bill is massive; adapted to pull apart raw flesh it’s an essential tool for a bird which scavenges on dead animals.

Their call is distinctive, a deep croaking sound, known as ‘gronking’ which often alerts me to look up to watch one flying overhead and that is surely one of the most evocative sounds of Britain’s uplands.

The Little Orme’s resident ravens are the avian monarchs of this cliff. They are often seen sitting together on the cliff edge from where they survey their realm, gleaming regally in the sunshine, occasionally lifting their heads to gronk at passing birds or at the empty sky. They have no need to defend their territory as the mere physical presence of these powerful birds is enough to establish their claim to it. But as with other species of birds, when nesting they may become more defensive and will attack anything they perceive to be a threat. 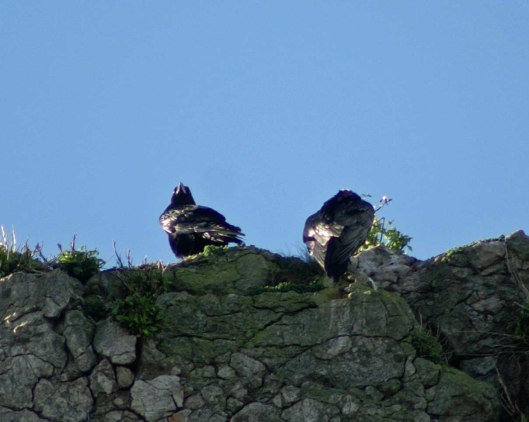 Raven pair in a favoured spot on the clifftop

When they are not ensconced there, another favoured spot for perching is further up towards the summit atop a rocky ridge. They can sometimes be found flying along the cliffs and across the summit.

The male of the pair may also be found at the sea edge of the cliffs where he spends long minutes hunched on a ledge gazing out to sea watching for potential invaders.

July- Raven looking out to sea

The everyday flight of the raven is direct, strong and steady, but it can also glide and soar freely and put on an impressive aerobatic display. In spring particularly, pairs of ravens tumble together high in the air, wings half-closed, rolling over sideways and nose-diving. They also have the trick of flying upside down for short distances. Perhaps these aerobics are part of the raven’s courtship display, but they may also perform for the joy of it and just because they can. 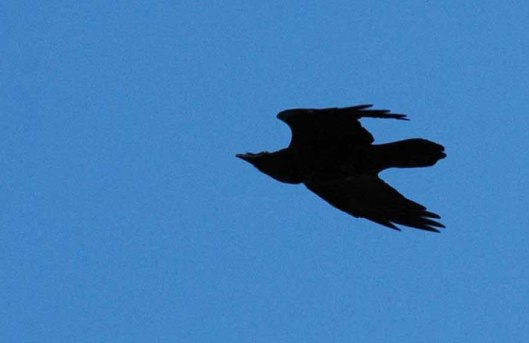 Ravens are sometimes regarded as the vultures of sheep country as they patrol in a pair or as a family group, searching for carrion or an ailing sheep or deer which they will watch and wait to die. They will eat almost anything, mainly carrion and small animals, but also insects, shellfish and even grain and acorns.

The Little Orme’s ravens return to the same nest each year, adding new material to renovate it as they need to. In the years I have watched them, they have raised only one or two young each year.

Both sexes build a nest of sticks cemented together with mud and bound and lined with moss and sheep’s wool or whatever is available locally, it is shaped into a deep cup, preferably on a ledge or in a crevice. They are amongst the earliest of birds to produce eggs, between February & April. There may be 4-6 eggs, pale green or blue with dark markings. Incubation, by the female only, takes about 19 days. Nestlings are fed by both parents until they leave at about 6 weeks. 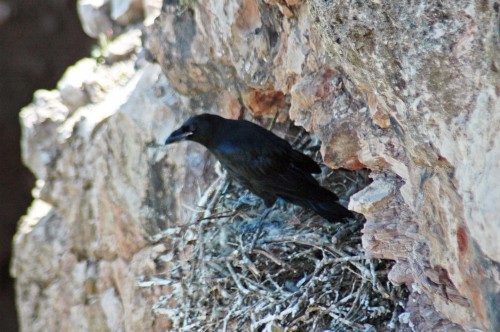 The raven is probably one of the world’s most intelligent and playful bird. Modern experiments have shown that they can count up to 8. Our hunter-gatherer ancestors would have observed the keen intelligence of this bird. It has a well-documented habit of deliberately revealing the whereabouts of deer, so that hunting wolves can find their quarry and leave spoils, which the ravens could eat. Even modern deer-stalkers have reported ravens helping them to locate deer, as the birds know that they will receive the ‘gralloch’ or guts after the deer is killed.

Paradoxically it has also been regarded as a bird of ill-omen. The old collective noun for a group of ravens is an ‘unkindness’, perhaps because of its harsh call and its presence as a scavenger at scenes of death.

In the Old Testament of the Bible, the raven was the first bird Noah sent to look for land, and Elijah is described as being provided for by ravens. They are used as a symbol of God’s providence in both the New Testament and in Christian art.

There is probably more folklore concerning the raven than any other bird in Britain.

In Welsh folklore, Bran the Blessed, the brother of Branwen (Bran is Welsh for raven) is a deity and a guardian of Britain whose totem is a raven. According to the Mabinogion, Bran ordered for his own head to be cut off,  after which it could still speak words of prophecy. Eventually it was said to have been buried beneath Tower Hill, at the Tower of London as a talisman against invasion.

The presence of ravens at the Tower is an echo of this legend and the prophecy says that if the ravens ever leave the tower, the Kingdom of England will fall, hence their wings are clipped as a precaution. It is thought that there have been at least six ravens in residence at the tower for centuries. Charles II reputedly ordered their removal following complaints from John Flamsteed, the Royal Astronomer. However, they were not removed as Charles was then told of the legend. Charles, following the time of the English Civil War, superstition or not, was not prepared to take the chance, and instead had the observatory moved to Greenwich.

Odin, the chief of the Norse gods, was accompanied by a pair of ravens, Hugin (thought) and Munin (memory), who would fly far and wide to bring news to Odin. One of Odin’s names, Hrafnagud, means the ‘Raven God’.

8 thoughts on “Ravens of the Little Orme”