Walking further up through the field the local buzzard pair circled overhead, then just a few minutes later a sparrowhawk appeared from somewhere close by and startled me as it flew just a few feet over my head, then continued towards the direction from which I had come.

A bit further on I stopped for a while and sat on one of my favourite rocks savouring the warm sun and the peace and quiet; that rarely lasts long just here as its at a sort of junction of trails so there are passing dogs, usually well ahead of their owners that invariably come over to see what I’m up to. I watched two peacock butterflies vying for the best spot on a sun-warmed rock. The winner opened its slightly faded, but still beautiful wings and basked for a few short minutes undisturbed. 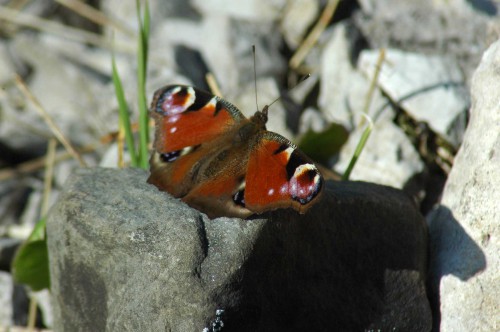 Moving off my rock to photograph the butterflies I noticed a patch of Wild Strawberry in flower. Tucked back against the rock it is sheltered and in a sunny spot, perfect for ripening berries. 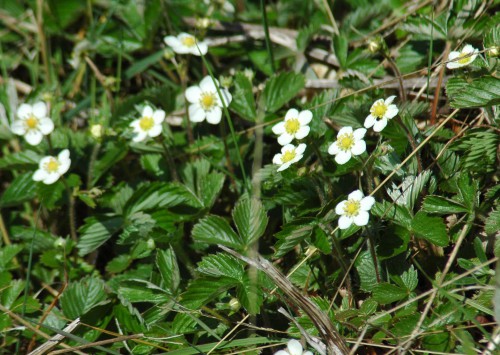 Back in the woods to walk up towards the summit I disturbed a large foraging bird. It flew up to a tree branch where it blended well into the dappled shade. It had to be a Mistle Thrush but I wasn’t entirely sure until it flew back down to the ground giving a better view. 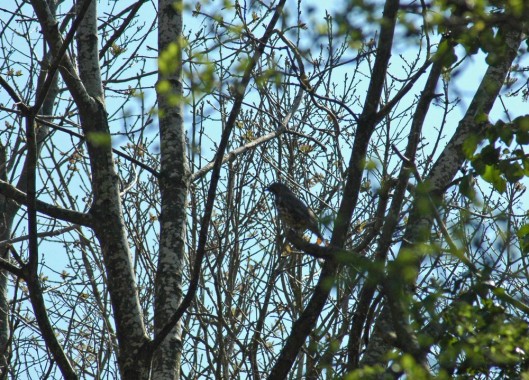 A Mistle Thrush blending into the dappled shade of the wood 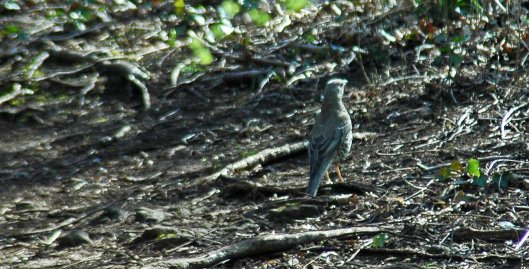 At the top of the track there was a single Speckled Wood butterfly, a lovely ‘fresh’ one. It was intent on finding somewhere to bask in the sun and flitting and zig-zagging about low over the track. You have to keep an eye on them because once they settle they can be difficult to spot. I had to make do with this view as it still wasn’t happy and shot off quickly. 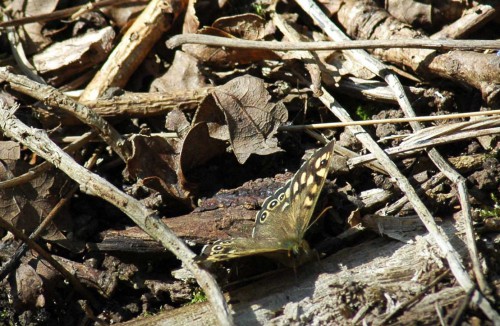 Back out in the open and continuing upwards I almost stepped on a Small Tortoiseshell butterfly also sunning itself on the bare earth of the track. 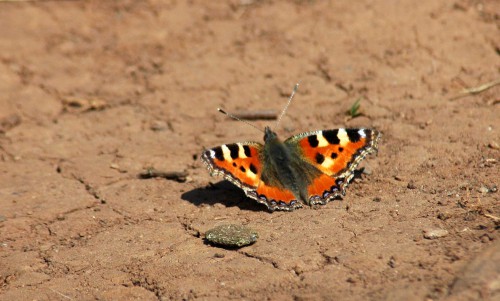 A little clump of Dog Violets growing in the grass at the side of the track caught my eye; the bee-fly zoomed in just as I pressed the shutter and was gone again before I could refocus on it.

Blackthorn, of which there is a generous amount up here, has been flowering for a short while now but is at its beautiful peak now. Last year was a sparse one in respect of the amount of sloes on the shrubs here, but if the masses of blossom on them now are anything to go by, this could be a bumper year. 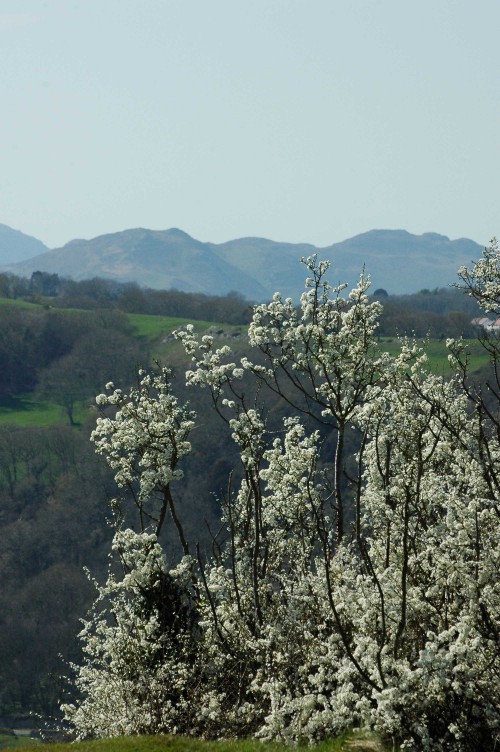 Blackthorn with a view

The flowers of blackthorn appear before the leaves and these are just beginning to break from their buds.

Another male Orange Tip butterfly was racing along the boundary of the blackthorn scrub. He didn’t stop, but as my first sighting of this species this year was a few days earlier of one nectaring on blackthorn, I’m using one of the photographs I took then. 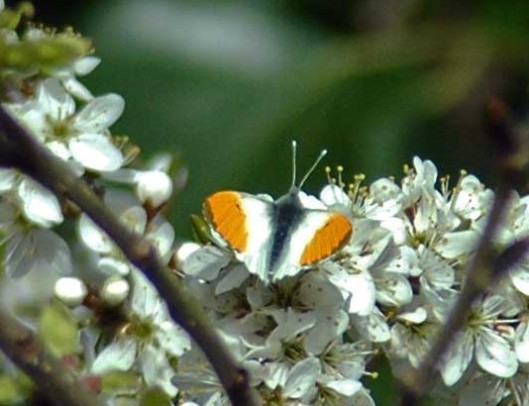 Following the path around to go up to the summit I noticed two Small Tortoiseshell butterflies on the ground. I thought at first they were mating, or about to do so and they did change their positions a few times, but nothing happened during the time I watched them. One was more fresh-looking than the other, but they were both perfectly intact and gorgeous. 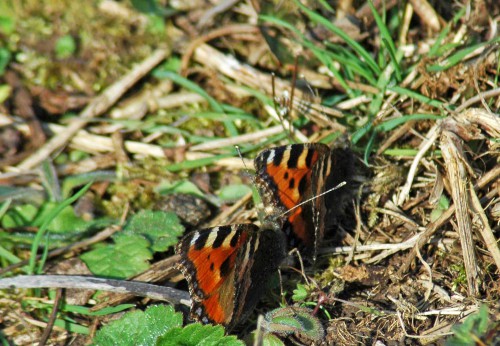 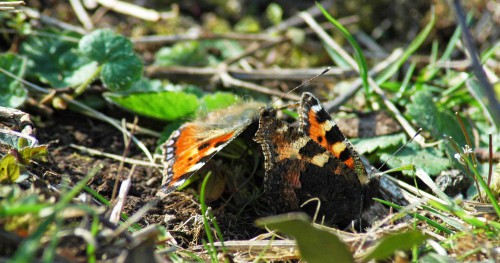 The grass up around the summit of the hill is kept short, constantly cropped by grazing rabbits. I think it’s highly likely that this particular part of the hill covers a maze of warrens and tunnels. You don’t often get to see them , especially during the daytime, but there are baby ones around now and not yet wise they can be seen out in the open. 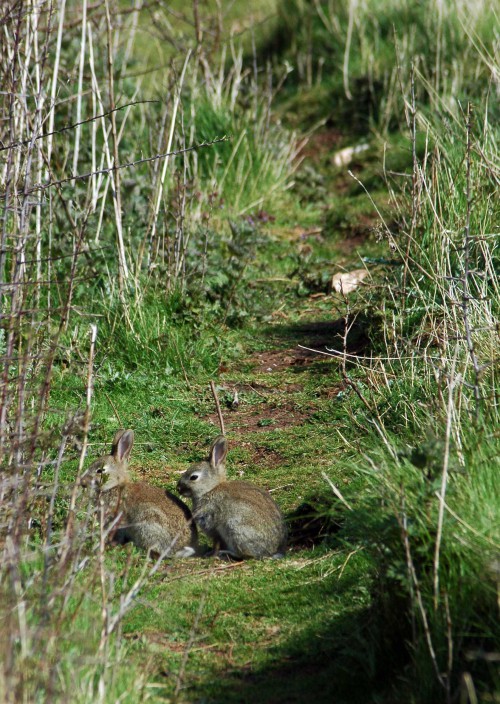 I cut back into the woods here from the track the bunnies were on, hearing a chiffchaff a short way in. I spotted Great Tits foraging in the trees close to the track that flew over to the scrubby wild clematis-covered scrub on the other side.

Where I stopped to take the picture there were a large number of smallish hoverflies darting about, resting briefly on leaves or many on the ground, all shiny and fresh looking as the ones I saw lower down earlier in the afternoon.

There were Blue Tits out foraging too and I think its likely that a pair have a nest site quite high in a tree with ivy growing up through it. 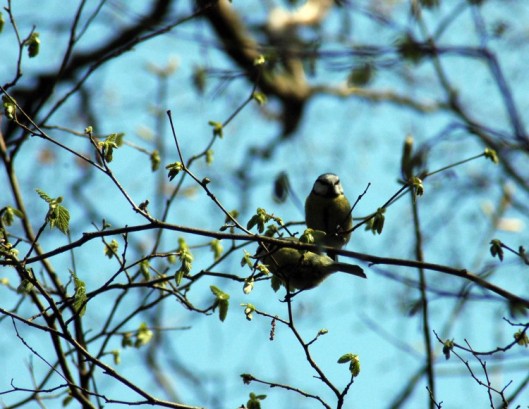 At the bottom of the track I stopped for a few minutes to listen to a Mistle Thrush singing. This was a déjà vu moment as I recall doing this exact same thing last year, more or less in the exact same spot, scanning the trees for the singer. I found him then, but couldn’t spot him today, so here’s last year’s picture to be going on with. What a lovely bird and how lovely to see him again. (More about the Mistle Thrush here)

2 thoughts on “Spring on the Bryn-part II”