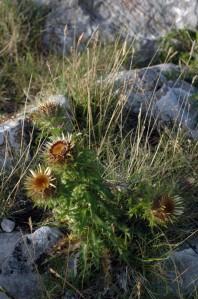 The Carline thistle is one of a handful of more unusual plants occurring in several of our nature reserves that have areas of dry calcareous grassland. It is a biennial plant so its appearance can be rather unpredictable both in exact location and in numbers of individual plants; it is never what you could call abundant. The plant can be seen throughout most of the year as when it’s finished flowering it persists as a very dry skeletal form of itself.

In past years I have found them on both ‘Ormes’, Little and Great but the best specimens, this year at least, are to be found growing on the top, rocky areas of Bryn Euryn. 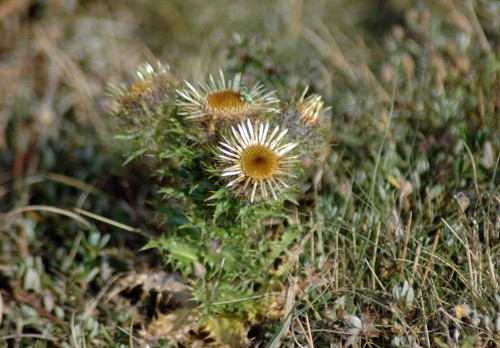 Carline thistle with a Swollen-thighed beetle on a flower

The Common Carline Thistle is a short, stout and prickly little thistle with intriguing  golden-brown-tinged-purple, rayless flowers (15-40mm across) that are surrounded by conspicuous, spiny, sepal-like yellow bracts which spread widely apart beneath. In the bright sunshine, they glisten silver and gold and in wet weather they close up.

The flowerheads are carried on densely prickly, leafy stems. The oblong leaves have toothed or lobed blades with spiny edges.

In bud the flower is contained by a tight  mass of dark purplish brown or black spines intertwined with a net of white fibres resembling cotton wool.

At  first, the opening heads look rather like dead or dying daisies, but this is their normal appearance.

The inner florets are straw yellow at first, but then purple petals start to emerge from the periphery, gradually proceeding towards the centre.

The seed-heads lend the plant a softer appearance. 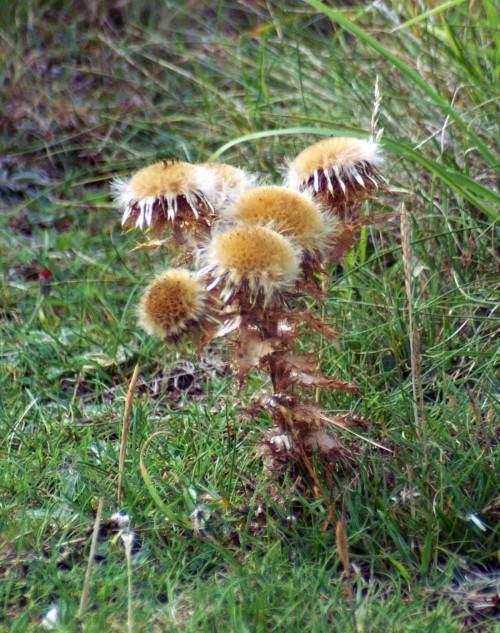 Seed-heads on a plant already drying out

The dead flower, after the season is over, appears much as it did when it was alive.

The flower head was once used as a humidity gauge because the bracts close in the higher humidity typical of impending rain.

This plant had some uses in folk medicine and legend has it that it got its common name ‘Carline’ because the Emperor Charlemagne used the plant to cure his army of pestilence.

Subsequently it has been discovered that both Stemless Carline Thistle(Carlina aucalis) (where it was first found) and Carline Thistle contain the acetylide Carlina Oxide orCarlinoxide (furylbenzylacetylene), the main compound (85% – 90%) of the essential oil from the plant, which has a long history of medicinal use in Europe due to its anti-microbial properties. It is active against two strains of MRSA and a number of other difficult infections. It is stomachic, carminative, diaphoretic and an antibiotic.