The Little Orme and Rhiwledyn Nature Reserve are a popular venue and much-frequented by local people and by visitors to the area, but despite that it remains a great haven for a wide variety of wildlife species.

I love wandering around here because as with the Bryn Euryn Reserve, there are a variety of habitats and many possibilities of sightings within a relatively small area. I do try to have a ‘target list’ when I set off to explore any area as I’m very prone to distraction by anything that looks interesting; today a Gatekeeper butterfly was at the top of the list. Missing from my recent Bryn Euryn list, which I was more than pleased with anyway, I felt sure there must be some of these very attractive little butterflies around close by. Lo and behold, almost as soon as I entered the site from the top of the steps, there were my Gatekeepers, several of them fluttering around a bramble. Then, as so often happens, something else caught my eye – a Hummingbird Hawkmoth was hovering around a patch of red valerian flowers. A common sight for me in southern Spain, I recognised it immediately although here it was above me at the top of a slope – too far away and too quick to photograph well, but I don’t want anyone to think I was imagining it!

The little Gatekeepers quickly regained my attention; all the individuals I saw, and there were plenty today, were pristine, so maybe all very recently newly emerged which could be why I hadn’t seen one before now.

22/7/11-A Gatekeeper- Pyronia tithonus resting on a nettle

Well, as they say, that was easy and I headed for the clifftop to sit and watch the seabirds for a while. Cormorants were dashing to and fro the rocky tip of the promontory, there were a few Fulmars tucked onto rocky ledges and a number of Herring Gulls flying around, making less noise here than they do in the town. Gazing down at the water I noticed a head pop up above the surface, which I though at first belonged to a diver, but through my binoculars it was clearly a Grey Seal.

It was very pleasant sitting there, but I soon got restless and set off in search of the next specimen on my list.

Now I was looking for the distinctive black and yellow striped caterpillars of the Cinnabar Moth, that feed on Ragwort. I had inspected the ragwort plants growing on Bryn Euryn for them without success, but didn’t have to look far to find them here.

I’ve always been fascinated by these fat creatures in their wasp-coloured skins and still wonder how on earth they transform into a delicate and smart scarlet- red and black moth. I only caught a brief sight of the back of one Cinnabar moth as it flew away from me from a ragwort plant –  I’ll have to come back for a picture another day.

Another striped creature was hiding from the sunshine beneath a leaf; a strikingly marked Banded Snail – Cepaea nemoralis.

I was aware that research has been carried out on this species of snail-something to do with the evolution of regional variations in colouration and the effects Song Thrush predation have on their populations,I think. During the course of looking for more information I learned that a big survey of the species population has been conducted and results are now available fromhttp://www.evolutionmegalab.org. I think the survey may be ongoing.

22/7/11-Another quite differently patterned Banded snail, although it bears similar shades of brown, there is also more pink in the shell

There is also a downloadable PDF available from the Open University’s called ‘How to hunt for snails’ for details. That might keep the kids amused for a while on a rainy afternoon.(If you’re interested, I’ve put the link in my blogroll). I might even do that myself on my next visit to the Little Orme.

While snails were on my mind I started to notice empty shells of the larger, darker Garden Snail-Helix aspersa. There were dozens of them, no two patterned alike and all quite beautiful. The thought crossed my mind that if they had been lying on a beach people would probably gather them up and keep them, but perhaps because most of us have been traumatised by the damage these voracious eaters can wreak on our gardens, we don’t give them a second glance. I made a collection of photographs for myself; I think they are well worth looking at. 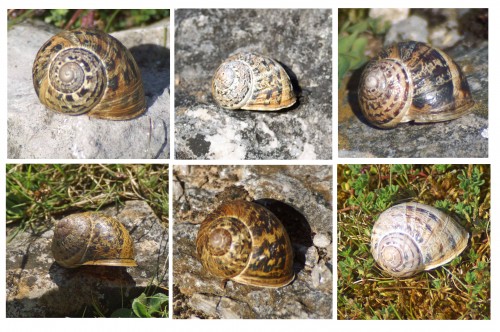 Walking along the upper edge of the deep ‘valley’ created by the quarrying of limestone I happened to look down and spot two Grayling butterflies fluttering around the rocks below. I stopped  to have a closer look and peering over the ledge I discovered a very pretty fern growing from the rock just below me.

Shifting around to get a better look and a photograph, I then saw there was a clump of another species growing just a short way from it.This one is called Rusty-backed fern, although not rusty with spores at the moment. I didn’t spot the delicate Wall Rue   growing beneath it until I downloaded my photographs. What a treasure-trove that bit of rock turned out to be – there’s lichen growing on it too.

I walked around and down into the quarry to see if I could find the Graylings, but by now the sun was lower and the rocky cliffs casting shadows, so they were either long gone or tucked up for the night. I was probably more pleased to find this Robin’s Pincushion anyway; I haven’t seen one of these fascinating fluffy-looking galls for ages: they are caused by the tiny black and red gall wasp,Diplolepis rosa, that is rarely seen.