As I’ve already said, it was mighty windy out here on the not-quite-summit of the hill; not the day for hanging around gazing at the views, no matter how stunning they may be.

A quick look around showed there to be little left in the way wildflowers in bloom, but there was colour on a wild rose – a whole colony of bright red Robin’s Pincushion galls. I don’t recall ever having seen as many on a single plant. The fuzzy growths will gradually fade to brown and the little wasps that cause the growths will emerge in June. If I’m lucky, one of these days I’ll catch them coming out, although the galls also attract ‘squatters’ and there can be a dozen or more species lodging in there!

I was to keen to keep moving, but when I spotted this lovely patch of Eyebright I couldn’t resist stopping again.

The dip between this part of the hill and the slope up to the summit is usually sheltered and offers a brief respite from the wind and the noise of traffic from the A55 below, but not so today. Yarrow likes this spot and there was quite a good large patch of it still in flower here. As with Eyebright, Yarrow is a plant designed to withstand tough growing conditions and is pretty persistent, as anyone that has tried to eliminate it from a lawn will testify; you cut it down and it grows right back! Personally I prefer the ferny-leaved Yarrow to the boring grass! Funny how we discriminate against certain plants, this wildflower Yarrow’s taller-growing golden-yellow flowered relative, Achillea, is a cherished garden plant! 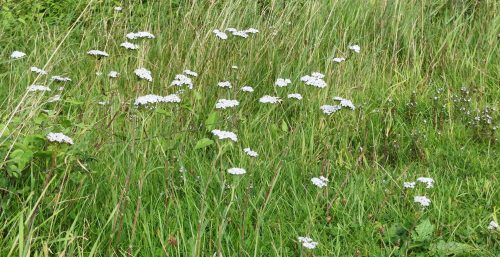 Some insects rather like its flowers too, I found a tiny bee motionless on a flower today and recalled I’d seen a similar looking insect on Yarrow in the Rhiwleddyn reserve a few weeks ago.

On the summit a patch of purple Knapweed was fuelling a few Common Carder bees that were managing to cling on and fly short distances despite the best efforts of the wind to dislodge them. The little bees had varying appearances; some were practically perfect, others a bit more battered, their ‘fur’ worn away and at least one that had a bleached appearance like it had spent too long out in the sun. 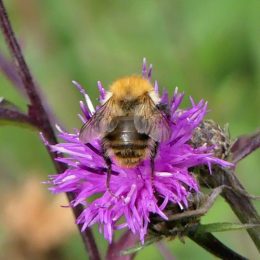 Common carder bee-fur worn from back 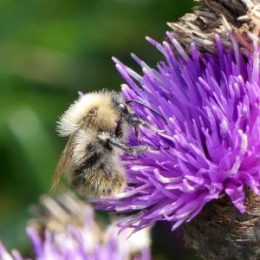 There was another lovely clump of Eyebright up here, this one framed by the distinctively-arranged pods that give the Bird’s-foot trefoil its name.

More Yarrow too, this plant sheltering a tiny fly. 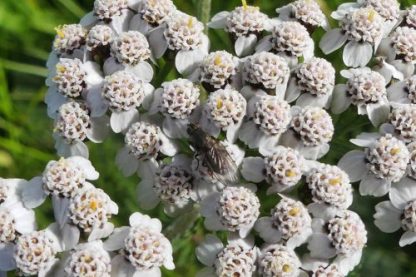 I was hoping that the other side of the hill would be a bit more protected from the wind, but alas, most of it wasn’t. The sun was putting in sporadic appearances though, so at least it felt a bit warmer. Ironically, the sea looked to be calm, was coloured in shades of beautiful blue and its surface merely ruffled. The blades of the wind turbines were motionless. 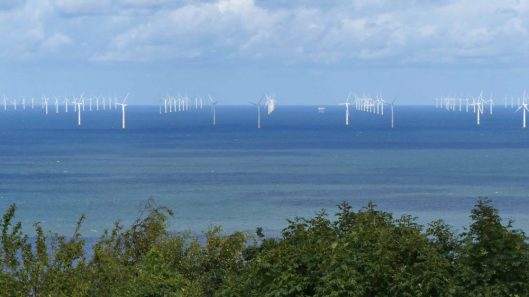 Looking over in the opposite direction to te sea, the view to the oddly-shaped hill at Deganwy, was fairly clear, although beyond it, Anglesey and the Menai Strait were shrouded in a light haze. I’m not sure if I’ve mentioned it before, but the hill is named the Vardre and gets its unusual appearance from having two rocky summits. It has a little less height than Bryn Euryn, it being 108m, (354 feet) while the Bryn is 131m (365 feet). It was once home to fortifications that included Deganwy Castle. 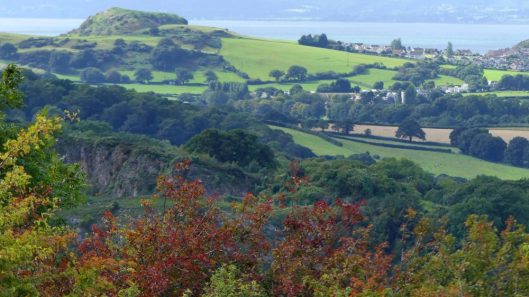 On the woodland edge leaves are beginning to change colour. Hawthorn is one of the first to go

along with Silver birch as I mentioned in the previous post. Out here in the open it was easier to appreciate the combination of yellow leaves against a clear blue sky.

Next to the Silver birch is a single Whitebeam, which bears berries. The berries are orange in colour now but will gradually turn red.

In the short grass there are still a few Rock-roses in flower and here and there are big fat ‘penny-bun’, or Bolete mushrooms. At least they would have been big and fat before they were nibbled away. I like the different shades and textures such nibbling has left on this one; there was a little black spider on it too.

I have often wondered what nibbled the mushrooms. A picture I took a few weeks ago, at the end of July may have the answer. The sight amused me and I wondered if it was a romantic al-fresco lunch for two? Of course there is more to slugs than meets the eye. No gardener is ever going to welcome them onto their plot, but out in the wild they are another important cog in the wheel of the natural waste-disposal system. Although one slug may look rather like another, there are rather a lot of different species of them in our British Isles. I submitted this image to the very helpful folk that run the Slugs and Snails of the British Isles Facebook Group, who responded that to be accurate they need to see the undersides of the slugs too, but from other features that it is likely they are juvenile Arion flagellus – the Green-soled slug.

The bottom of the grassy ‘downland’ hill was still flowery with Hemp Agrimony, Knapweed, touches of Scabious and a sprinkling of Ragwort. 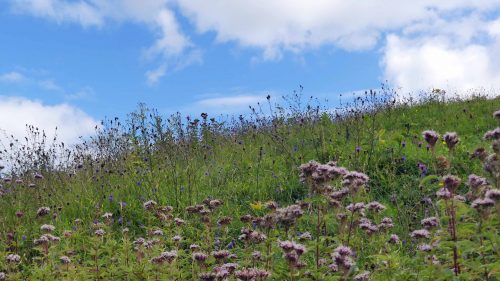 I walked down to where it meets with the woodland edge and lo and behold, for a few glorious minutes the sun came out. Suddenly it was warm and bright and the scene came alive with a whole host of insects vying with one another for the best blossoms. 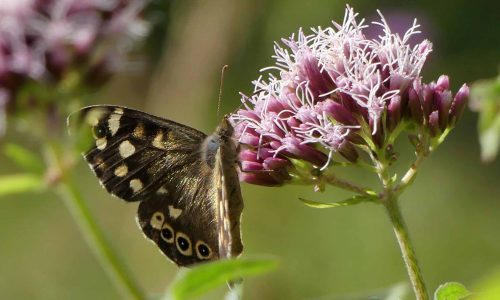 I hardly knew where to look first, but then couldn’t resist the sight of a pristine Speckled wood feasting on Hemp agrimony. There were several of them, all looking freshly beautiful; most were nectaring on various flowers while some rested on the leaves of nearby trees basking in the sunshine. The only other butterflies in evidence were Red Admirals which unusually stayed out of range of the camera.

There was a good variety of hoverflies,large and small, a Common wasp and more Common carder bees too. 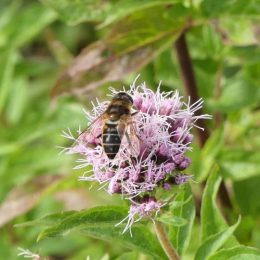 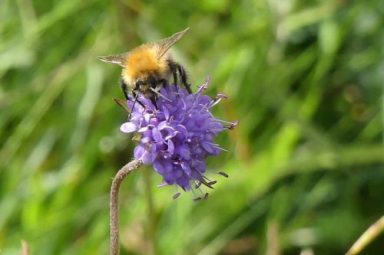 A beautiful cast of insects, but the star of today’s show was a big handsome hoverfly, which surprisingly doesn’t have a common name, but whose scientific name, Volucella zonaria makes it sound a bit like an Italian pasta dish. This is the largest British hoverfly and is quite a recent addition to our native list, appearing on the south coast of England during the late 1930s. According to my Hoverfly bible, from there it has spread upwards and outwards across the country as far as Cheshire and Humberside and South Wales in the West. We’re not so far from the Cheshire border here, so they must still be spreading, this is the second one I’ve seen this year, the other was in my daughter’s garden a few weeks ago. 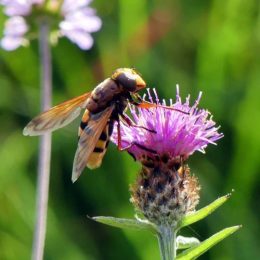 The spell of sunshine didn’t last long and the wind was still blowing relentlessly; time to set off in the direction of home. 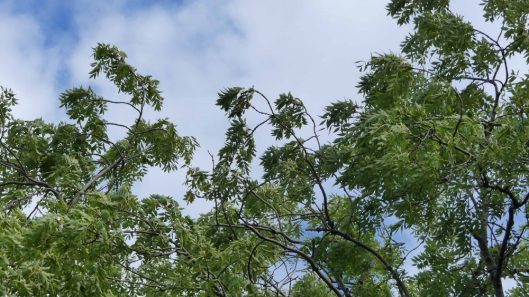