11:00am  It was cooler than I’d anticipated in the woods this morning. The sky was cloudy and gusts of a chilly breeze blustered between the trees of this usually sheltered mid-slope of the Bryn; less than ideal conditions for the insects I was hoping to see. And I wished I’d worn a thicker fleece. But the sun was intermittently winning through the clouds and ever the optimist I assured myself it would get warmer for me and the little creatures.

There are a few places on my usual trail that I think of as ‘hotspots’ for insects, even on cool days such as this. The first one is an untidy, brambly-nettley spot, where opportunistic plants have filled a gap in the tree line and spread across to the other side of the path too. Dappled sunlight reaches and warms the spot, aphids thrive here, there’s nectar and pollen to be had while the bramble is in flower, followed by its fruits; the perfect ingredients for a hoverfly hangout. If I’m patient and hang around for a few minutes I’m often rewarded with sightings of a few hovering customers and sometimes less expected visitors too.

Insects need sunshine to warm up their flight muscles to get them going, so cooler, cloudy days can be surprisingly rewarding for sightings of basking individuals slowed down by the lack of warmth. There were a few hoverflies here today, also other common flies which I’m trying to take notice of and appreciate more; well, at least I’m aiming to put names to some of them. Most of those I saw were common ‘houseflies’, a generic name that covers quite a few different species. I think it’s their habits that most of us dislike; some of them look quite pretty. 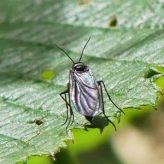 A long-bodied black insect with pretty iridescent wings scurried erratically over the surfaces of leaves, a wasp I think, definitely a hunting predator, maybe a Digger wasp.

About to move on I spotted a dot of colour in the shade of some leaves. Sitting motionless was another more recognisable predator, a male Scorpion Fly.

Scorpion Fly-There are 3 species of Scorpion Fly in Britain, apparently difficult to separate other by examining genitalia; the most common being Panorpa germanica. They frequent shady places almost everywhere. All are scavenging insects and completely harmless despite the males’s scorpion-like tail. The female’s body lacks the tail, simply tapers to a point. 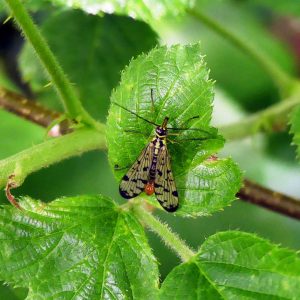 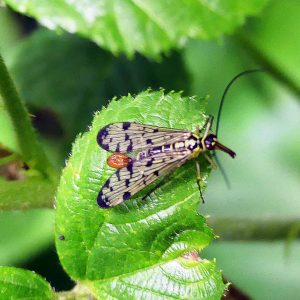 The closed tree canopy excludes most flowers now. An exception is the woodland grass, False Brome, which grows prolifically here and is flowering now. 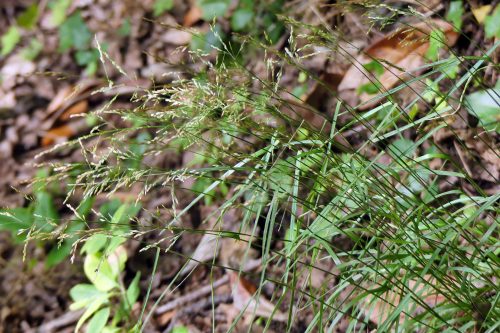 A splash of colour took me by surprise – a holly tree with red berries!

Perhaps relics of the days when this path was part of the grounds of a Victorian manor house, are large clumps of two attractive ferns. Both species are evergreen, maintaining their green fronds throughout the seasons, but both look particularly fresh and verdant now and the Polypody has new fronds unfurling. 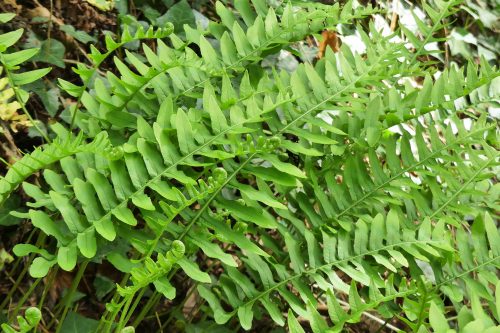 A tiny pale-coloured moth swirled by the breeze spiralled down to land on a bramble leaf low to the ground, settling with wings spread butterfly-like under the shelter of other leaves. It is a Dwarf Cream Wave (photograph probably not far off its actual size)- the lines that show grey-mauve are where its original pale brown scales have been worn, or washed (!) away. 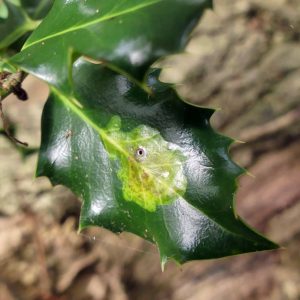 The pale patch on this holly leaf is probably the result of the work of an insect, the Holly leaf miner Phytomyza ilicis. This is a fly whose larvae burrow into leaves of this specific species of tree and leave characteristic pale trails or mines.

Interestingly, I learnt (from Wikipaedia) that “the holly leaf miner has frequently been used in ecological studies as a system to study food webs. Examination of the leaves can show whether the leaf miner has successfully emerged, been killed by a parasitic wasp, or been predated by blue tits.”

I’m not sure what the perfectly round hole in this one indicates. It could just be the original entry point of the egg-laying adult female’s ovipositor, but maybe too big? It looks too small and neat to be an exit hole and blue tits leave a triangular tear when seizing a miner as prey. Maybe it is the mark of the work of a predatory wasp?

Speaking of wasps, I spotted another on an ivy leaf – a bit more distinctive than the black one I saw earlier due to its long antennae, so I asked the experts at BWARS and they say it’s a member of the Ichneumonidae family. The whole of this family are parasitoides and most species attack the caterpillars of butterflies and moths. It’s a dangerous life being an insect.

A big old oak tree marks the junction of my ‘Woodland Path’ and the Woodland Trail that circuits the Nature Reserve. It’s lost a few of its branches and the big lower branch has a split right through it that provided a safe home to nesting Great tits earlier on in the year. 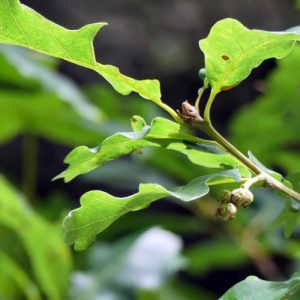 Happily, the tree seems to be going strong and is currently nurturing some baby acorns. They have stalks, which indicate this is an English, or Pedunculate Oak.

Stepping out from the cover of the trees I realised how windy it had become; windy enough for birds to be able to just hang in the air and ride the air currents with minimum effort. Two buzzards were overhead, mewling and swooping around in the air currents, one being harassed by gulls, poor thing. 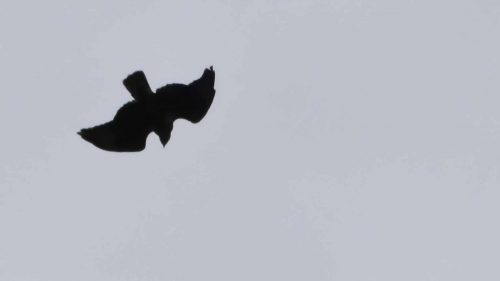 The unmistakable bulk of a Buzzard

My second ‘hot-spot’ is almost at the junction of the two tracks. It’s a huge bramble entwined with gorse and over which wild clematis scrambles. That blackberry & wild clematis combination is one of my favourites, even if it is another of the sights that I associate with summer’s approaching end. The clematis is just coming into flower and, the bramble already has ripening fruit, so not much for insects here today.

A lovely Speckled Wood butterfly sat on a smaller bramble nearby which still has flowers. The butterfly let me get very close, hardly moving in the coolness of the day.

There are few flowers along the sides of the Woodland Trail now, due in part I’m sure to their having been strimmed back in June – this part of the path is maintained by the local council who are wont to get these ‘jobs’ done before people complain about paths being overgrown. All kinds of good stuff was cut back, including orchids, and much of the hogweed that would now be giving nectar and pollen to hoverflies et al. I hoped they were finding sustenance nearby. 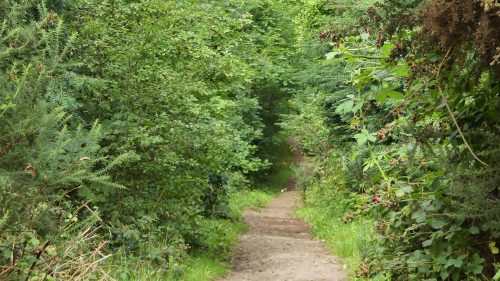 A few odd plants have survived, or revived, to flower here and others are fruiting. There are a very few hazelnuts that have thus far escaped the jaws of voracious grey squirrels, who usually eat them while they’re still soft and green. 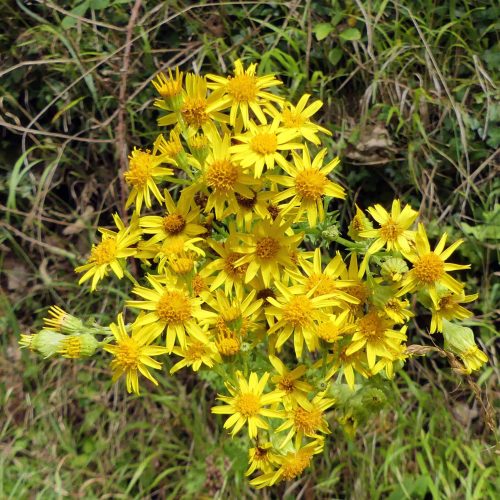 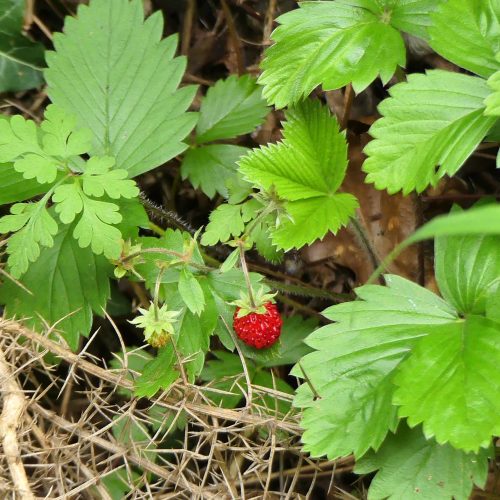 Cool windy days may seem unpromising if you’ve set off hoping to see insects, but if you keep paying attention there is never ‘nothing to see’ (pardon my grammar). I spotted a tiny movement on the surface of a leaf and caught sight of an even tinier leaf hopper. As I got closer with the camera lens I noticed another movement under the leaf; a tiny spider had spotted the leaf hopper and was vibrating her web to try to get its attention. The leaf hopper disappeared under the leaf….. I wonder if the spider got her lunch? Apologies for the less-than-good photo, but I’m sure you get the drift!

So, I’ve reached the steps leading up to the field now and looking forward to what it has in store…. 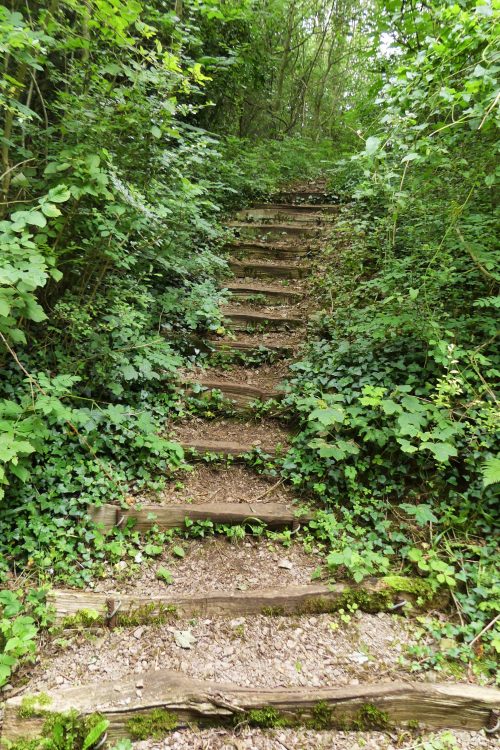