The tide was high this morning when I arrived at the promenade, so I was not expecting to see many birds about foraging on the shore, but I’m happy enough to just watch the sea, so I looked out over the railings anyway . I’m glad I did that, as there beneath me, a whole flock of Turnstones were perched atop the sea-defence boulders immediately below. The birds were either resting quietly or catching up on their preening as they waited for the tide to turn and expose the rock shore once more.

Turnstones are distinctive medium-sized waders. They are high Arctic breeders, and are migratory. They are chunky powerful birds that have strong necks and bills that are well suited to their feeding technique. As the name implies, these species readily turn stones, shells or seaweed looking for hidden invertebrates. They eat insects, crustaceans and molluscs. 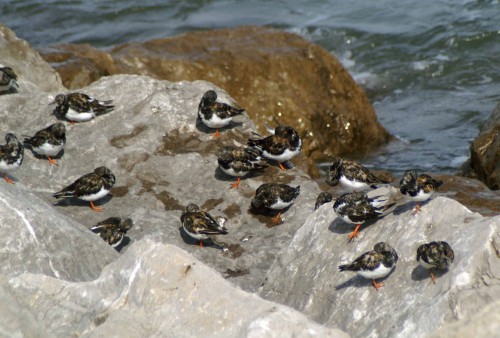 As the birds were obligingly still, I counted 70 birds in varying sized groups spread along a length of the rocks, but there may have been more below and out of my sight. 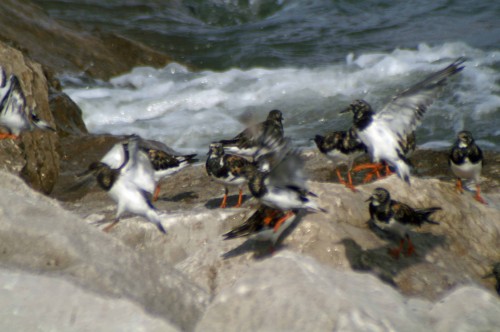 It would be interesting to know where the birds have come from as these particular birds have not been here for long. Turnstones are present around our coastline for most of the year. Birds from Northern Europe pass through in July and August and again spring, then Canadian and Greenland birds arrive in August and September and remain until April and May. Non-breeding birds may stay through the summer. 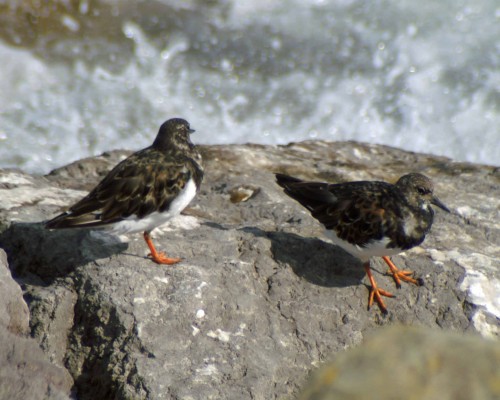 11/9/11-Plumage is mottled shades of brown, black, grey and chestnut brown. The head is patterned either brown and white or black and white. Underparts are white. Legs are orange.

Turnstones spend most of their time foraging creeping and fluttering over rocks, picking out food from under stones.

Their appearance is striking in flight, with white patches on the back, wings and tail.

Where to see them

Turnstones are found all around the UK coastline. They are strictly coastal,and are seen on stony, sandy and muddy shores beaches and are often found together with other waders such as Purple Sandpipers. The birds particularly like feeding on rocks covered with seaweed, and will feed along seawalls and jetties.