There’s no such thing as a bad time to enjoy a walk on Bryn Euryn, but during the longer daylight hours of the summer, an early evening during the week can be the perfect time to find it quiet and peaceful.

The woodland is almost silent now, with just the occasional rustle from the undergrowth or the flash of a skulking bird to remind you that you are not alone here. It reminds me of such walks in the woods around the cottage I grew up in, at an age when my imagination frequently ran riot and I was convinced I was being watched from every tree and shrub. By what or whom I’m still not sure, but I can clearly remember that feeling  on summer evenings such as this, when the silence is almost tangible.

Out in the open insects are making the most of the late sunshine to stoke up on nectar fuel for the night.  Hogweed is in flower and almost every umbel has at least one pair of mating soldier beetles. 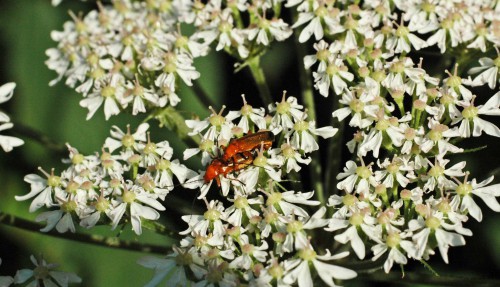 The slightly cooler temperature of an early evening can make it easier to photograph some insects as they are intent on feeding and move a little slower. 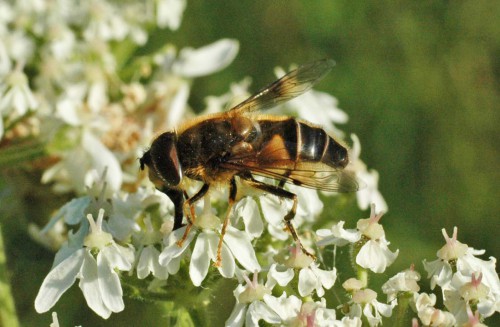 A movement at the top of a long grass stem caught my eye and I found this lovely Forest bug balancing there. It has a lovely bronzy sheen to its wing-cases. 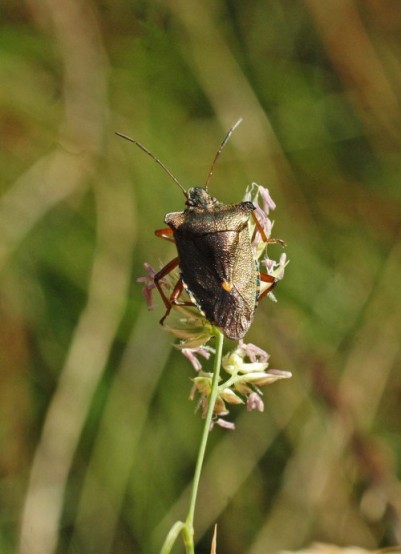 Brambles are beginning to develop berries, but there are still flowers on some bushes attracting bees and hoverflies.

Marmalade fly on a bramble flower

One of my favourite wildflowers, the Harebell is in fresh full bloom now. Sometimes they find themselves growing in goups, caught up amongst long grass stems where they grow longer stems to reach the open air.

I love to see them best growing from shorter turf, their beautiful blue bells held aloft on sturdy wiry stems where they can turn towards the sun and nod and wave freely in the breeze.

An important summer nectar flower, Hemp Agrimony, whose dusky pink flowers are relished by some species of butterflies is also blooming now. The impressive stand of it in my photograph was in shade this evening, so no visitors; I’ll have to come back earlier on a sunny day. 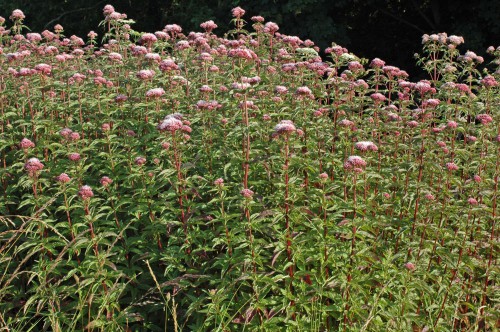 An impressive stand of Hemp Agrimony

While some plants are at the peak of their flowering, others are already beginning to produce their fruits. I mentioned blackberries earlier, which are just beginning to form, but there are wild-growing raspberries here that are perfectly ripe. I couldn’t resist picking and eating a few; sorry birds.

The hips on the Burnet Roses are formingly nicely, already a good size and red in colour, they will get bigger yet and turn black.

There are tiny acorns on the oak trees too.

And the Rowan trees have ripening berries.

Back into the woods for a short while and its very quiet, although I have heard a Chiffchaff as I’ve been walking around and disturbed a young Robin where it was pecking around on the damp earth of the track. Emerging back into the sunshine onto the grassy hillside I also disturbed a rabbit that raced off up the steep hill in front of me. I watched its white cotton tail bobbing away and envying the effortless way it bounded up there. There are a lot of rabbits here that do a great job of grass-keeping in certain areas, but you don’t see them often. 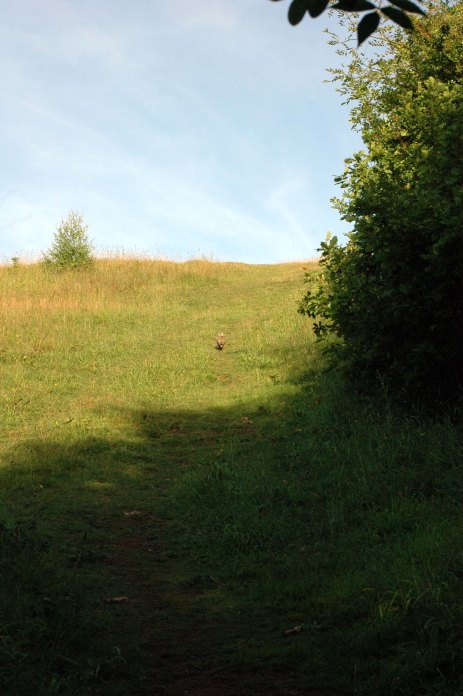 Almost at the top of the hill I stopped to gaze at the view as I always do. That’s not just to catch my breath, although it helps, but it’s a stunning view whatever time of day or year you’re admiring it. I love it when as now the sun is lower in the sky and shadows sculpt the hills. The sky was particularly interesting this evening too.

Evening panorama from Bryn Euryn. (click on image for a better view)

On the rockier summit of the hill, where the soil is thinner and more calcareous, the fascinating Carline thistle thrives. For much of the year you can see the dried out remains of the leaves and flowers, but now is the time to catch it coming into full curious flower. I will go into more detail about this plant in a later post. 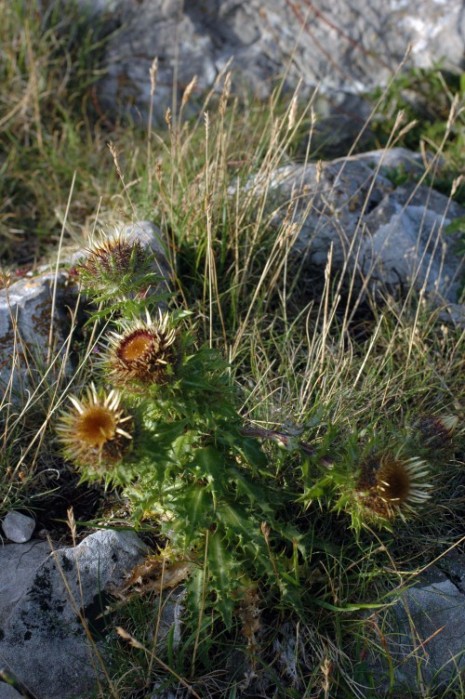 I had seen a few butterflies during the course of my walk, all fluttering around in the long grass. There were a few Small Heaths, but most were Meadow Browns. Just as I was heading back towards a woodland path to head back to the car, this one fluttered into view and landed on the tight bud of a knapweed flower. I was really pleased, as although this is an abundant species here, they are rarely this obliging and views such as this are not often offered.

Meadow Brown butterfly on the bud of a knapweed

This year seems to be an exceptionally bountiful one for berries, which is very good news for birds, insects and other animals that can stock up before winter’s chill descends. Dormice, squirrels, foxes and badgers are very fond of autumn fruit and nuts, as are migratory birds fattening up for winter, and insects such as the hawthorn picture wing fly and micro-moths which feed on spindle berries.

Way back in July I photographed Rowan trees laden with berries that were being eaten by Bullfinches, and the first of  the blackberries were already ripe. The rowan berries are all gone now, but other trees and hedgerows are bursting with hawthorn berries (haws), holly berries, wild rose hips, blackberries, elderberries, spindle berries and more. 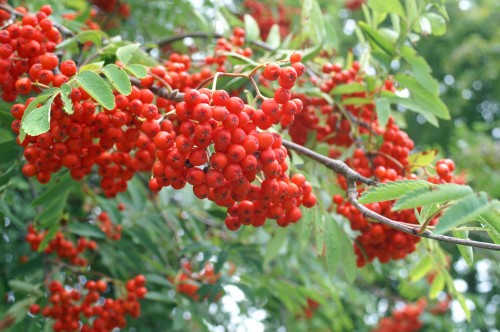 Gardens are contributing to the berry bounty too, the pyracantha hedge in our garden has been attractively garlanded with orange berries for a few weeks now and although birds have been picking at them, this past week they have been positively feasting. The House Sparrows in particular have flocked in, quite literally, arriving all together and tucking in to feed while chirping and chattering noisily to one another. Their mass visits have given me the opportunity to asses the Sparrow numbers; the most birds I’ve counted at one visit so far has been 22, but there may have been even more on the other side of the hedge where there are more berries.

Blackbirds have also sampled a few of the berries; they have a great liking for most berries and seem to have inbuilt radar that unerringly detects the exact moment they are ready to eat.

Blackbirds are very partial to berries

The RSPB website has an interesting page on the subject of birds and berries, from which I’ve picked out the following bits of information:

The intricate relationship between birds and berries has developed into a mutual dependence for survival.Some plants use berries as a clever way to entice birds and other animals to distribute their seeds. A plant that produces berries surrounds its seed in juicy, fleshy pith, rewarding the birds that eat them with vitamins and energy.

Berries are an important food source for many birds during the winter, especially when the ground is too frozen to hunt worms or snails, and there are few insects about.

Some birds, like song and mistle thrushes, blackbirds, redwings and fieldfares, find most of their winter food from berries.

Most berries are either red or black. This makes the berries easier for birds to find them. Evergreens, and plants that produce berries when their leaves are still green generally produce red berries, which show up well against a green background. Black coloured berries are thought to show up better against leaves that have turned yellow or brown.

Blackberries are not true berries. They are aggregate fruits, which are fruits grouped together that contain seeds from different ovaries of a single flower.

Birds in a bush

Thrushes and waxwings prefer berries with smaller seeds, like rowan, as they are really only interested in the flesh, whereas other birds, like hawfinches, can make use of the seed itself, and so are attracted to berries with large seeds, such as hawthorn, blackthorn, cherries, and bullace (wild plum).

Prunus spinosa (blackthorn or sloe) is a species of Prunus native to Europe, western Asia, and locally in northwest Africa. It is also locally naturalised in New Zealand and eastern North America.

The fruits, or sloes are blue-black n colour, small and sour. They are traditionally used to make sloe gin, jam and jelly, and are usually picked after the first frosts in late October/early November.

Fruits such as sloes that have a single stone are also not true berries, botanically they are known as ‘drupes‘. Drupes are fleshy fruits produced from a (usually) single-seeded ovary with a hard stony layer (called the endocarp) surrounding the seed. Other drupes are plums, peaches,apricots and cherries.