Today is Michaelmas Day; the feast day of Saint Michael and All Angels. For many of us the significance of this date will most probably have faded into the mist of times past, but there are ancient customs, traditions, festivals and folklore surrounding it that I find fascinating.

The Archangel St. Michael is the patron saint of the warrior, who Catholics have designated as the protector of those who strive to preserve security, safety and peace. 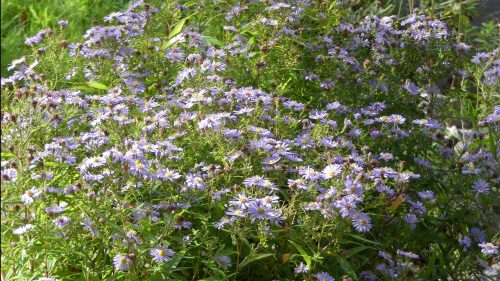 In the British Isles the harvest season used to begin on the first day of August, which was called Lammas, meaning ‘loaf Mass’. Farmers made loaves of bread made from the first of their new wheat crop which they then gave to their local church. This custom ended when Henry V111 broke away from the Catholic Church and instead it became tradition to hold Harvest Festivals at the end of the season close to Michaelmas Day, which traditionally marked the last day of the harvest season.

Michaelmas Day is one of the four “Quarter Days” of the year. They are spaced three months apart on religious festivals close to the solstices or equinoxes: Lady Day is the first on 25th March, then Midsummer on 24th June, Michaelmas is on September 29th and the final one is Christmas on 25th December. These four dates marked the days on which rents were due and bills had to be paid up. Michaelmas, or Goose Fairs were ‘Hiring Fairs’, attended by both those seeking employment and to hire new staff. On the day after Michaelmas every year, agricultural labourers presented themselves, along with their tools, at the nearest market townto offer themselves for hire for the coming year. Here too Geese were brought to market for sale and tenants seeking a delay of payment traditionally bought a goose as a present for their landlord to help seek his indulgence.

“Eat a goose on Michaelmas Day, Want not for money all the year”.

Michaelmas Day is sometimes also called Goose Day, when particularly in northern England and Ireland, it was thought that if you ate goose at Michaelmas you would have good luck for the rest of the year and a fat roast goose was the traditional Michaelmas treat. This was supposedly the best time of the year to eat goose, when the birds had feasted on the stubble of the harvested wheat fields but had not yet put on the fat they needed to get them through the winter. Goose was eaten to protect against financial need in the family for the next year another saying is:

“He who eats goose on Michaelmas day shan’t money lack for debts to pay”.

Goose Fairs are still held in some English towns, but geese are no longer sold. The most famous Michaelmas fair is the Nottingham Goose Fair which was originally held in September on St Matthew’s Day, but moved to early October in 1752. The Goose Fair goes back so far in history that no one knows for sure how it got its name, but it’s probably from the hundreds of geese which were driven there from all over Lincolnshire to be sold in Nottingham. Most historians agree the fair probably started just after 1284 when the Charter of King Edward I referred to city fairs in Nottingham.  Goose Fair started as a trade event, although nowadays it is better known for its fairground rides and games.

After the calendar reform of 1752, some activities traditionally associated with Michaelmas Day (29th September) moved forward eleven days to October 10, which is sometimes called ‘Old Michaelmas Day’. Old Michaelmas Day used also to be called “Devil Spits Day”, which according to old British folklore, is the last day that blackberries should be picked. It was said that the Devil was kicked out of heaven on St Michael’s Feast Day, falling from the skies onto a blackberry bush. Already rather cross, he then proceeded to curse the fruit, scorching them with his fiery breath, then according to where you’re from, he either stamped on them or spat on them, thus ensuring they were unfit to eat! Legend has it that he renews his curse annually on Michaelmas Day and therefore it is very unlucky to gather blackberries after this date. An old Irish proverb says:

“On Michaelmas Day the Devil puts his foot on blackberries”

This particular piece of folklore certainly persisted into my Northamptonshire 1950s-60s childhood, when we were warned by my mother to be sure not to pick or eat blackberries after the end of September as “the Devil spits on them”. I wouldn’t have dared risk it and I’ve told my children the same thing! I do hope they remember and pass it on. I must remember to tell the grandchildren myself, and will keep the date as I know it, even though I now know that it’s safe to pick and eat them for another ten days. Although in my experience they’re usually past their pick-by date by now anyway, being a bit blown or mouldy or even maggoty.

Late summer and early autumn wouldn’t be the same without Michaelmas Daisies. Ours have been flowering in the garden for a few weeks now and as always at this time of year are doing a brilliant job of supplying pollen and nectar to a range of insects still out seeking it. 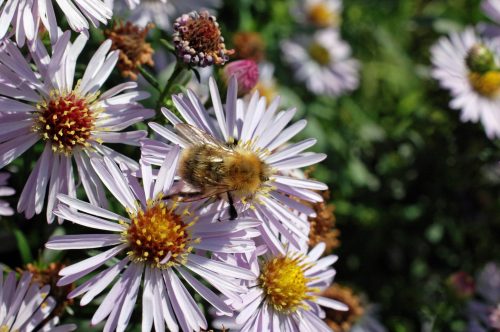 Michaelmas daisies were first introduced into Britain from North America around the beginning of the eighteenth century. The Victorian’s love of wilder gardens encouraged their wider planting and from there they escaped into the wild, becoming naturalised in an array of habitats.

The Michaelmas Daisies, among dede weeds,
Bloom for St Michael’s valorous deeds.
And seems the last of flowers that stood,
Till the feast of St. Simon and St. Jude.

(The Feast of St. Simon and Jude is 28 October)

In the language of flowers, the Michaelmas-daisy symbolizes a farewell or a departure.The act of giving a Michaelmas Daisy symbolises saying farewell, perhaps as Michaelmas Day is seen to say farewell to the productive year.

‘If St Michael brings many acorns, Christmas will cover the fields with snow.’

If the breast bones of the goose are brown after roasting the following winter should be mild, but if the bones are white or have a slight blue hue then the winter will be severe.

‘A dark Michaelmas, a light Christmas.’

The Victorians believed that trees planted on this day would grow especially well.

Michaelmas used to be a popular day for the winter night curfew to begin – the first hint that winter was on the way. Curfew took the form of a tolling of the church bell, usually one strike for each of the days of the month that had passed in the current year and was generally rung at 9pm.