Wigeon are generally known as winter visitors to the UK, although in some places, mainly in Scotland and the north of England, some are established as resident breeders. The birds begin to arrive back in their wintering grounds in the British Isles as early as September. The influx continues through October and November and by December the BTO estimate that they number around 440,000 birds. They gather in spectacular vast flocks mainly in coastal locations, moving inland at dusk to crop the grass in fields and meadows, but some winter inland, in flooded districts and on large lakes and reservoirs. Highly gregarious birds; flocks of Wigeon hundreds strong rest by day on estuaries and mud-flats.

The Wigeon drake is one of our most handsome ducks. Medium-sized and distinctively shaped, the head is dark chestnut with a wide creamy yellow stripe extending from the base of his short blue-grey bill upwards between the eyes to the crown of his head. The body is softly patterned grey, the chest pinkish-brown, the underbelly is white and the rear end a contrast of black and white. The wings are pointed and in flight he reveals white shoulders and green wing patches. In eclipse plumage (June-October/November), the male resembles a dark female, but with the white forewing. Immature males lack the white shoulders of the adult.

Similarly distinctively shaped, females are more subtly attractive, being more uniformly brown than females of other species. They are slimmer and have a more pointed tail than a female Mallard. As the male, they have a high forehead, but the head is a darker chocolate brown and the bill, still blueish, is smaller than the drake’s. Her back is patterned brown, she has a greyish-green wing patch visible in flight and a white belly.

Immature males lack the white shoulders of the adult

Wigeon are lively birds and the whistling of the drakes and low growling, or “purring” of the ducks, which don’t quack as other species do can often be heard when several birds are together.

Wigeon are classified as dabbling ducks and are closely related to Mallards, Shovelers, Garganey, Gadwall, Pintail and Teal. But they are unusual amongst ducks as they spend much of their time out of the water, where they graze in waterside grassy areas, rather like geese. Wholly vegetarian, their diet consists mostly of leaves, shoots, rhizomes and also some seeds, which seem to be what those in the photographs above and below are stripping from the grass stems. 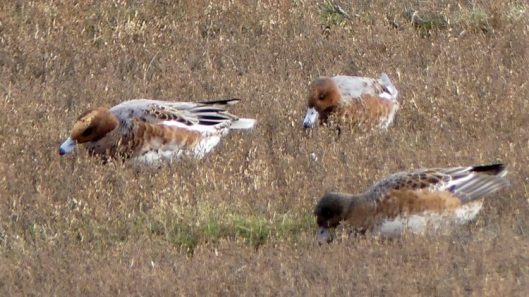 The ducks do spend time in the water where they also feed on waterweed, occasionally dipping ‘bottom’s up’ as their cousins do.

The first Wigeon’s nest found in the UK was in 1834, in Sunderland. During the early 1900s Wigeon were expanding as a resident breeding British species, but by the late 1960s this came to a halt and there was then no regular breeding south of Yorkshire. The habitats they favour for breeding are lochs, rivers and marshes, especially those in wooded countryside, although they do occasionally nest on coastal marshes. The BTO estimate there may be somewhere in the region of 400 breeding pairs, mainly in Scotland and northern England. Their habitual breeding grounds are in the far north, in Iceland and throughout a wide Arctic and sub-Arctic belt that runs west from Norway across Asia to the Bering Strait.

The scientific name for the Wigeon as given by the BTO is now Mareco penelope (prev.Anas penelope) The more recent name derives from both Brazilian Portuguese: marréco=a (small) duck and Greek: penelops=a type of duck. The RSPB and bird books show the previous scientific name of Anas penelope. 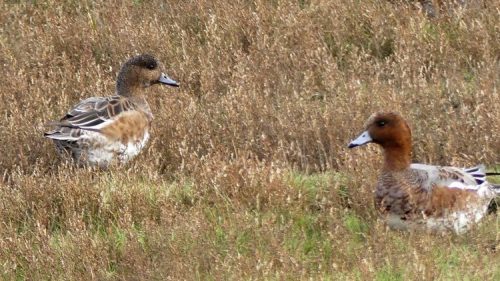 Wigeon have been recorded in the British Isles since the Mediaeval times of the 16th century. According to the eminent language expert Professor Walter William Skeat, the name was then spelt “Wigion”. In 1767 Gilbert White in his History of Selbourne recorded seeing “multitudes of Widgeon and Teals (which) in hard weather frequent our lakes in the forest“. It is still referred to as “Widgeon” in one of my old nature books that was copyrighted in 1934. In another which is not dated, but titled “Birds of our Country & of the Dominions, Colonies and Dependencies” that must be of a similar age, the author refers to it as Common Wigeon. These days it is commonly known simply as Wigeon, or as Eurasian Wigeon.

The Old English names are much more fun and evocative, most of them originating in Norfolk and the East of England or in Northumberland where historically the birds have wintered in their thousands.     Whew; Whim; Whewer and variations of these such as Pundle-whim and Pandled Whew, are all thought to have come about from the bird’s whistling call. “Whim” equates to whistle, as in the name of the Whimbrel, which translates as Seven Whistlers. I think the Welsh “Chwiwell” also derives from the bird’s musical call. A “pandle” or “pundle”, is a winkle, which it was thought the ducks collected as they fed on bottom-living water plants.

Another old name is “bald pate”, referring to the broad cream crown stripe and “lady fowl” – I’m not sure about that one!

The collective name for a flock of Wigeon is a Bunch.

Wigeon have long been hunted for eating. I read that historically, Wigeon were easy prey for wildfowlers, which may be why in the 18th Century the name also came to be used for a stupid person. They may not have always been the first choice of the hunters as according to my trusty “Birds of our Country & of the Dominions, Colonies and Dependencies” – They are not the nicest to eat, for they sometimes have an unpleasant fishy taste, although at other times they may be excellent. As with Wild Geese, which are always very ‘fishy’ when they first arrive but rapidly improve upon a diet of British greenstuff, the flavour of the Wigeon varies with its food.

That prompted me to research current legislation on the hunting of wildfowl and learned that within the designated shooting season, Sep 1 – Feb 20 in England, Wales, Scotland & Northern Ireland, it is legal to shoot Wigeon. I was surprised to see that: I naively assumed that birds’ with an Amber conservation status, which Wigeon have as a species with declining numbers, that they would automatically be protected. Clearly not. It is also permitted to shoot Gadwall, Goldeneye, Mallard, Pintail, Pochard, Shoveler, Teal and Tufted duck. I knew shooting Mallard, the classic Wild Duck, was approved and had my suspicions about Teal, but as for the rest, how does that fit with our horror at our European neighbours that shoot other migrating species of birds? I don’t suppose anyone knows how many ducks are shot in the wild each season, but game shooting is becoming an increasingly popular sport and without its feathers, who knows what you might be eating in a trendy restaurant with Wild Duck on the menu?