Did I mention the strong west wind that was pushing the rain clouds across the mountains towards us? Only once I’d left the shelter of the trees to continue upwards did I realise how strong it was, with sustained gusts forcing the long grasses and wildflowers to bend to its will.

The grassy edges of the lower summit are full of wildflowers. On the exposed side there is mostly Knapweed, with touches of Ragwort and a white umbellifer I think is Upright Hedge Parsley. There was more Red Bartsia, just one plant as far as I could see, but a better one to see properly than the one lower down. On the other side, sheltered by a belt of Blackthorn, the red berries of Lords and Ladies, Cuckoo Pint if you prefer or plain old Wild Arum. 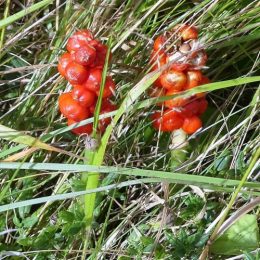 I didn’t take this exposed path to the summit today, but ‘turned left’ to continue into the sheltered hollow where I thought there may be more insect activity.

A  wasp clung on to a lone Hogweed flowerhead swaying in the wind amidst a sea of waving long grass.

There was a sizeable patch of  the umbellifer that may be Upright Hedge Parsley amongst dry  long grass, but as I photographed the flower it was visited only by a single, quite faded Sun Fly hoverfly. 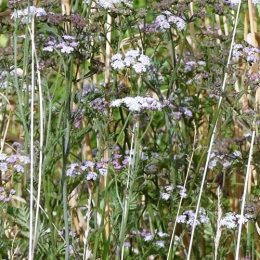 There were a few Meadow Brown butterflies doing what they do – suddenly flying up in front of you from where they had been basking on the warm earth of the track and heading into the safety of the grass. There were a couple of Gatekeepers too, sheltering from the wind to bask low in the brambles. The one  I photographed had a wing-tip missing; maybe a narrow escape from a predator, but such damage can be one of the hazards of territorial scraps and of frequenting thorny brambles. 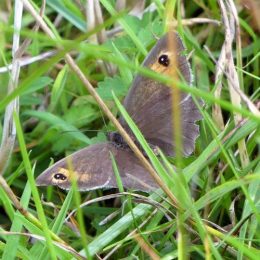 And just for some colour, Rosebay willowherb, which I always think is quite out of context here, even if it does look pretty. Today at least it was giving nectar to a few little bumblebees.

From the summit the views are always spectacular and today you could clearly see the low clouds skimming the tops of the higher Carneddau mountains to the west and heading our way.

The effect on the seascape was strangely beautiful too. Looking to what is roughly the south-east across Colwyn Bay, the  distant hills were obscured by a mist hazeand although the sea appears to be flat calm; the wind was rippling back the surface, giving it texture, while the moving clouds created dynamic areas of light and shade. Mesmerising.

Back to earth I headed across the hilltop to make my way back down the other side. Mushrooms continue to pop up from the short turf and are still being nibbled. I’ve done a bit of research and from their shape I think they are a species of Boletus. This one was encircled by another of my favourite wildflowers of late summer, the lovely and semi-parasitic Eyebright. There are two variations here – plants with flowers blotched wih purple and others the more usual white with yellow centres.

Further down the slope where Knapweed grows in the longer grass, there were a few nectaring insects. A Common Carder bumblebee, a male Red-tailed Bumblebee and a few hoverflies. There was also a badly-damaged Burnet moth that had somehow managed to haul itself up a flower stem to feed, despite having lost at least half of all of its wings. 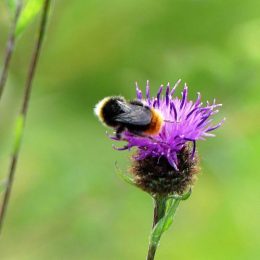 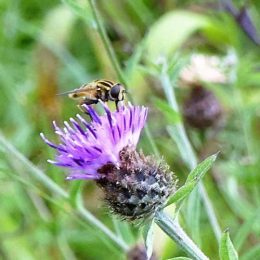 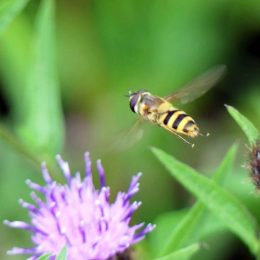 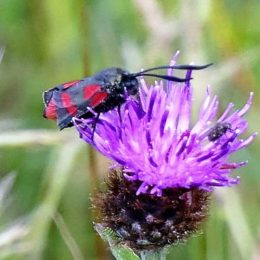 As I reached the bottom of the hill I stopped by a patch of Hogweed growing right on the edge of the woodland. The clouds finally cleared the way for some sun to shine through, which encouraged out a little flush of hoverflies. There was a lovely fresh female Myathropa florea – mentioned in a previous post as having the memorable and distinguishing ‘batman logo’ marking on its thorax. It was extremely mobile, but clearly hungry and from a distance I managed to get some images showing it from several angles. 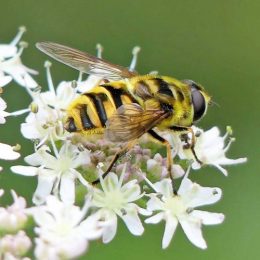 Myathropa florea from the side

Then a treat to end the walk – a petite and dainty hoverfly with black and white markings, another new-to-me species.

This insect was tiny, highly mobile and flying frequently between adjacent flowerheads, so my photo opportunities were few and some of the images I did get were a bit blurry. I’m not sure if its a Leucozona glaucia or similar looking Leucozona laternaria. My book tells me the former are ‘abundant’ in this part of the country and the latter more so here than further east. 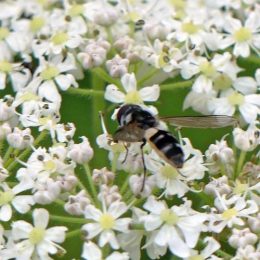 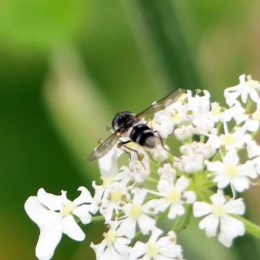 If you are interested in finding out more about Eyebright, I have posted more info and pictures of it in my new blog which will be dedicated mostly to wild flora in their habitats, called, funnily enough ‘where the wildflowers are’.