Taking the old cliff path around to Angel Bay, I disturbed a beautiful fresh(ly) Painted Lady butterfly. It circuited round a bit before settling on a stony patch, pressing its wings tightly against small sun-warmed limestone rocks. 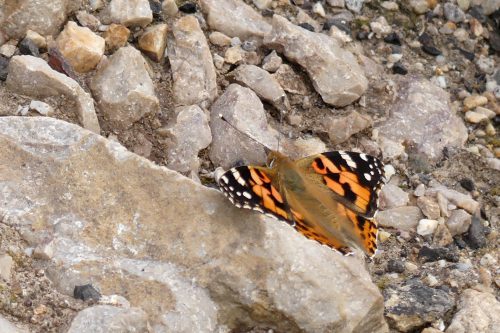 A small crowd of people gathered on the cliff edge above Angel Bay looked promising; maybe there was something exciting to see down there? But alas, no. They were simply chatting and the beach was empty. This convinced me that as I suspected, female seals don’t give birth to their pups here; if they did they would surely be here by now. There were seals here, but only two, both swimming lazily around in the water. On this cool, misty-damp morning I suspect it was warmer in the water than out. One was hanging in the water with just its face above the water, showing off a lovely set of whiskers.

Another was simply cruising around peacefully.

There is a thriving breeding population of Cormorants here on the Little Orme, so there is never a shortage of these brilliant birds to see, especially around their nesting site on the cliffs further around the headland. At this time of year and through the winter months, their numbers are boosted greatly and the steeply sloping cliff face that forms one side of Angel Bay is punctuated with a multitude of black dots and dashes. This is now Cormorant Central; the volume and frequency of arrivals and departures of birds rivalling that of aeroplanes into and out of a busy airport. 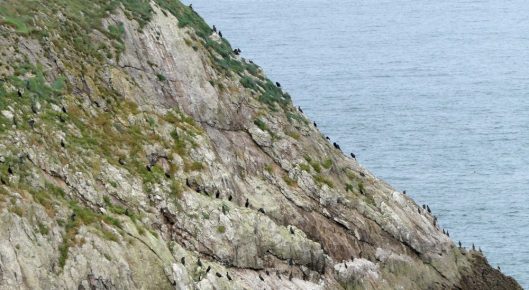 I wonder how they work out their perching places? Do early arrivals get the prime spots and do they now have their own patch, or is it up for grabs if they leave to fish for lunch? Do they stick to family or colony groups? 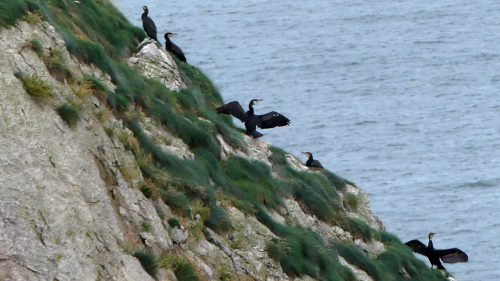 Whilst pondering on the whys and wherefores of Cormorant society, I was distracted by two little shapes down in the Bay – definitely birds but I was, of course, on the wrong side to see them properly. It’s not uncommon to get the occasional Guillemot or Razorbill here once the breeding season is over, so I didn’t really think further than that. Winter-plumaged Red-throated Divers didn’t enter my head at the time, but that is what they were. Birds we get around this coast during the autumn and winter, but most often much further out that you need powerful optical assistance to spot.

I must get back into the habit of taking binoculars out with me instead of relying on my camera’s zoom; sometimes it’s not enough. In this instance a glimpse and a snapshot was all I got anyway; these birds are for once aptly named as they do dive – a lot, reappearing nowhere near where they went under. I walked around to the other side of the rocky hump on the Penrhyn Bay side of the headland as from there you get good uninterrupted views of a wide expanse of sea. Birds fly low past here, keeping close in to the cliff, so some good views of whatever is travelling by; mostly Herring gulls and a few Black-headed gulls today. 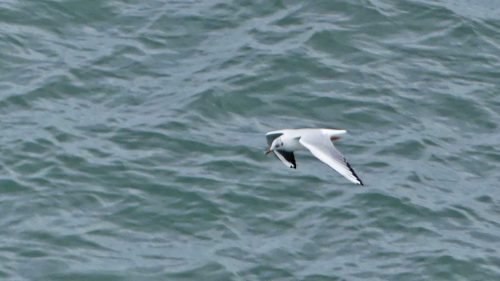 There was a Cormorant swimming around on the sea’s surface, giving a good view of the strong hooked beak.

A small black and white bird bobbed into view and this really was a Razorbill Alca torda. It was a good way out to sea, but close enough that I could see, through the camera lens, that it was in the process of changing from summer to winter plumage. The plumage of the throat and sides of the neck change from black to white in the winter – the side of this one’s head is still a mix of the two. 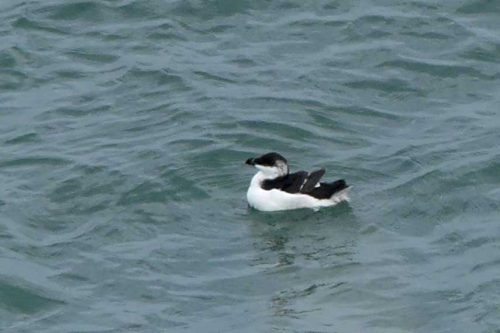 It was in no hurry to move away and intent on having a good grooming session. 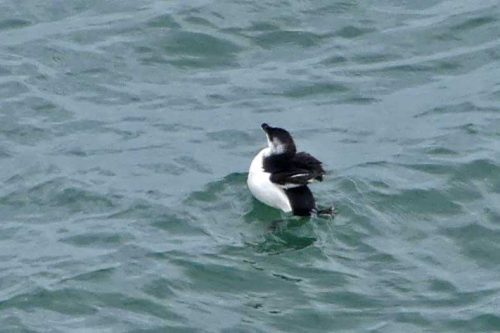 Members of the Auk family, to which both Razorbills and Puffins belong, look a little like penguins, although they are not closely related. The next few images show some of the similarities between them; species of both have black-and-white colours, an upright posture and share some of their habits. 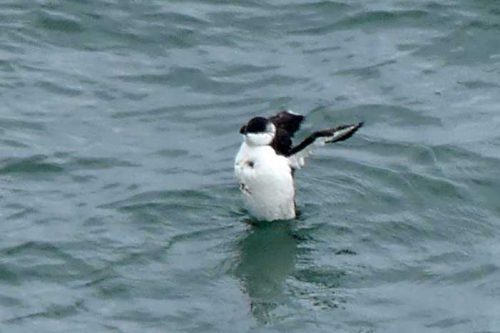 ‘bye ‘bye little Razorbill, thank you for the photographs. Have a good winter. 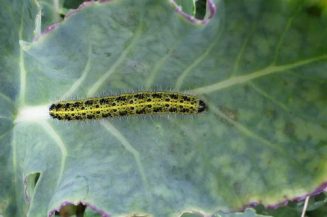 Now a perfect example of how my mind skips around. Although tuned into ‘bird mode’, I spotted a wild cabbage plant and thought ‘maybe there’ll be a Large White butterfly’s caterpillar on those leaves’. And there was, so a gap in my  last-but-one post can be filled in!

I was watching the Razorbill et al for a good half an hour, maybe more, then walked back around the cliff to have a last look around Angel Bay. The seals had gone, but the movement of a smallish bird on the cliff edge caught my eye. Rock Pipit came to mind, but no, it was a much lovelier Northern Wheatear. It was either waiting for the weather to improve or taking in some food before continuing on his long migration back to warmer climes; perhaps both. 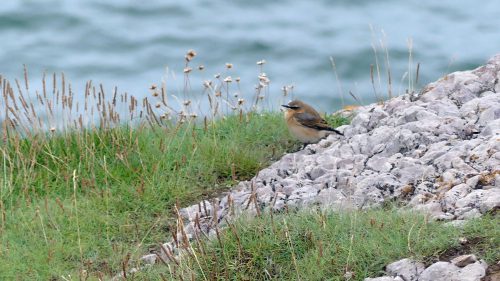 I’m not certain whether this was a male or female as when males are in their winter plumage both sexes appear similar. I’m edging towards male as there seems to be a slate-grey patch remaining at the top of the wing. The bird’s common name of ‘Wheatear’ has nothing to do with its food preferences or its ears, but refers to its white rump (i.e white a**e)! 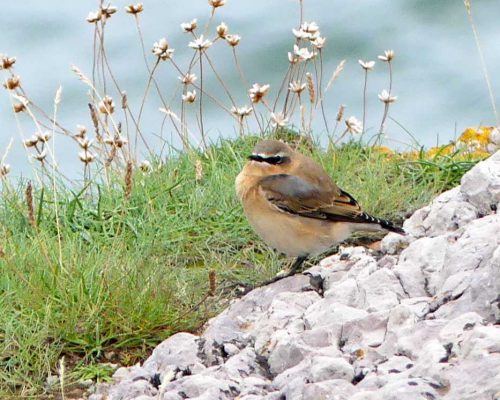 More people arrived at the cliff edge and my bird flew away, down onto the big rocks on the beach. 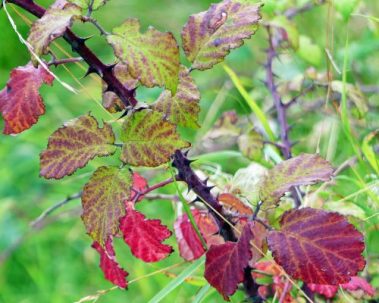 I began heading in the general direction of the ‘way out’, but hearing a Stonechat nearby diverted to see if I could find it. They’re one of my favourite birds and are often obliging in terms of appearing in the open. I wasn’t disappointed; as I passed by one perched up on top of a bramble, within whose tangled depths a pair have regularly nested.

At first I thought this was an adult female , but as I got a closer look I could see it still has a speckled head, so it’s probably a juvenile of this year’s brood.

Robins were out singing all around the site today, but more wary now of being seen than when they sing in the spring. The one I finally got close enough to photograph was perched on a bracken frond keeping a beady eye out for movements on the ground below, ready to pounce.