Since writing the last post this morning I’ve been wondering and reading about chiffchaffs and willow warblers and thought it might be worth nipping back down to Min-y-Don to see if there might be any of those I saw on Friday still hanging around. To my surprise and delight there were little warblers everywhere, almost every tree had at least one amongst its twigs and leaf buds and there were birds darting out after flies all over the place. They are so mobile and active that counting them was not really an option, but there are a good many. That doesn’t make identifying them any easier, but what I will say is that there is definitely a mix of the two species, indisputably so after hearing songs from both this afternoon and the fact that they are still here must indicate that they are all finding plenty to eat.

When I came to look more closely at my photographs I spotted that the one below has a leg ring – anyone recognise it? The tag I mean, not the bird! 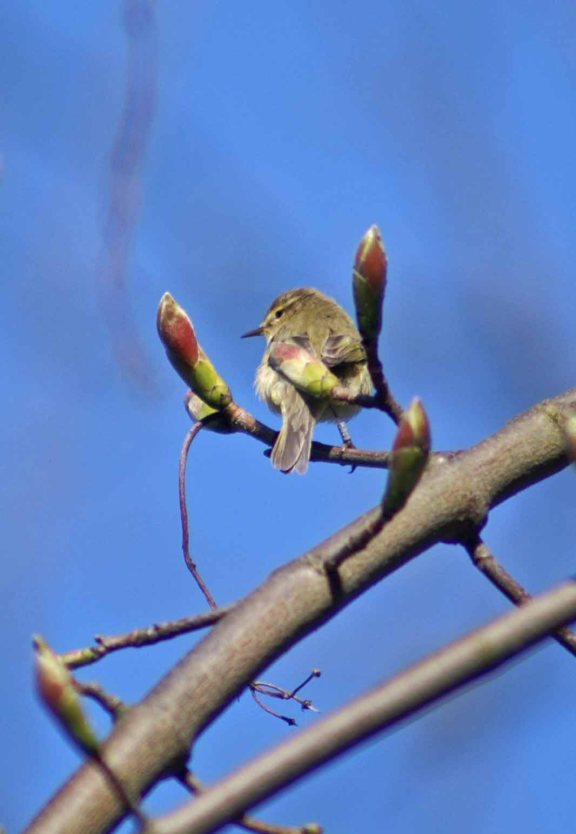 Willow warbler between buds of a sycamore. This bird is ringed, anyone recognise it?

Getting views of the birds is not a problem at all, as I said they are all over the place, but getting sight of an individual for more than a second or two is something else. They are not too bothered about people being around, one surprised me by popping up over the wall alongside the river right in front of me: it was chasing after a fly which I saw escaped, more’s the pity as it looked like a mosquito.

I followed the path alongside the river and just the other side of the bend heard a chiffchaff singing very close by. I located it quite easily, on the branch of a tree quite surprisingly low down, but it moved away when it saw me. He didn’t go far though and reappeared on a branch overhanging the path with a good view over the water. He sang a few phrases, then suddenly dashed down to the water and swooped straight back up again with a sizeable fly in his beak. 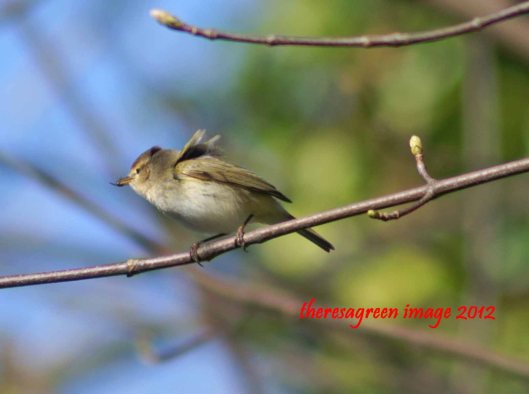 The chiffchaff with his prize – a good-sized fly

He ate it and sat for a while longer before flying off over the river and the road to trees on the other side. 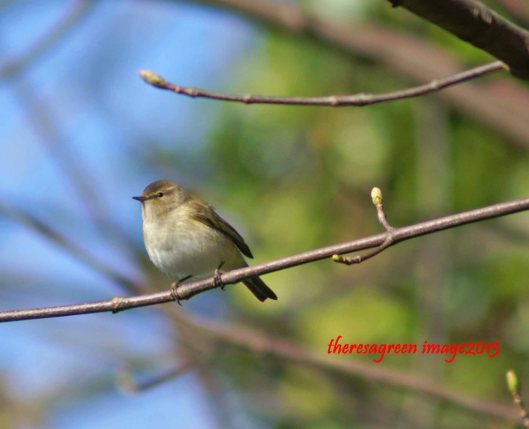 The chiffchaff after polishing off his meal. He certainly looks well-fed and healthy

I don’t suppose they will be around in these numbers for much longer, but what a joy it has been to see them and I hope they all thrive throughout the rest of the spring and summer wherever they go.

Friday was a beautiful day and during my lunch hour I thought I’d take some photographs of dandelions, daisies and primroses which I wanted for the next blog I intended to write. There is a lovely grassy bank alongside the road I take back to work, which is currently smothered with gold and white wildflowers and just what I wanted, so I stopped alongside and got out of the car. But, as I opened the car door, I heard a chiffchaff calling from somewhere high up in a tree, a sound I have been waiting to hear this spring, so flowers were quickly forgotten and instead I walked down the hill towards the river and the trees of Min-y-Don listening and trying to work out where he was.

(This spot is just a stone’s throw away from the sea and the point at which the little River Colwyn runs into it and the area known as Min-y-Don is a remnant of the old woodland that used once to cover the whole area, so an oasis for resident and birds on migration with water and potential food.)

As I approached the footbridge over the river I spotted two small birds on the water’s edge that were perching briefly on overhanging plant stems then darting out and flitting over the water, clearly chasing after small flying insects. I have watched Chiffchaffs do this many times in Spain, both over water and from the tall palms in our garden there when they were fruiting and attracting insects there. The tiny birds are amazingly agile in the air and watching numbers of them performing their aerobatics was always magical and enormously entertaining. I know they were doing it to feed themselves, but I could never help feeling they were enjoying the chases and taking the opportunity to show off their skills to their companions; surely the amount of energy they put into the pursuits must have burnt off any calorific value they gained from the flies they actually managed to catch?

I digress, I know, but still being able to hear one as well, you can see why Chiffchaffs came to the front of my mind as soon as I saw them.

Chiffchaff, or is it a willow warbler.

I attempted a few photographs of the birds in the very brief intervals they paused from their pursuits, one or two of which came out OK, but the more I looked at them through the long lens, the more I began to question my identification and to think they might actually be Willow Warblers. I think the problem arose from the fact that although I am very familiar with chiffchaffs, I am not so au fait with willow warblers, something I clearly need to sort out. 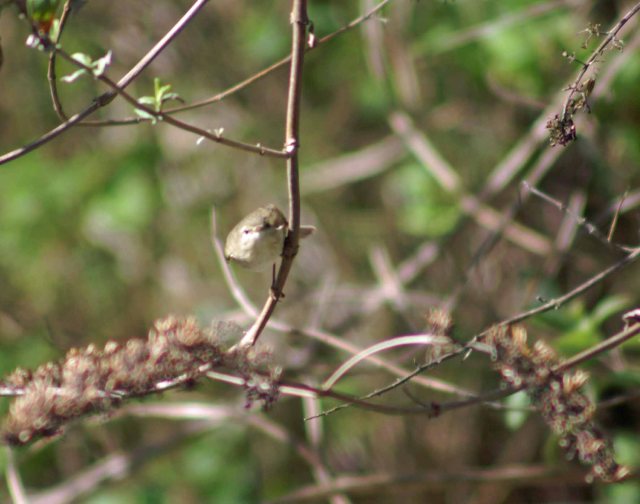 On the point of take off

I enjoyed watching these two birds for several minutes before they were joined there by the footbridge by another, then another, then another two. I realised then that I must have happened upon a little flock of migrants that were taking the opportunity to ‘fuel up’ before continuing their journeys to their breeding places. I was already more than happy with this encounter with the birds, so when I walked further along the footpath to where it bends around to follow the river’s edge and saw even more, I was delighted. It’s at times like this when you wish you had someone with you to share the experience, so you could stand or walk along in a public place clutching a camera with a long lens and smiling without feeling self-conscious. And so you have someone to confirm or offer alternative suggestions to your identification of tricky warblers. I guess that is why we blog- I would definitely appreciate opinions on this one, especially the first photograph. 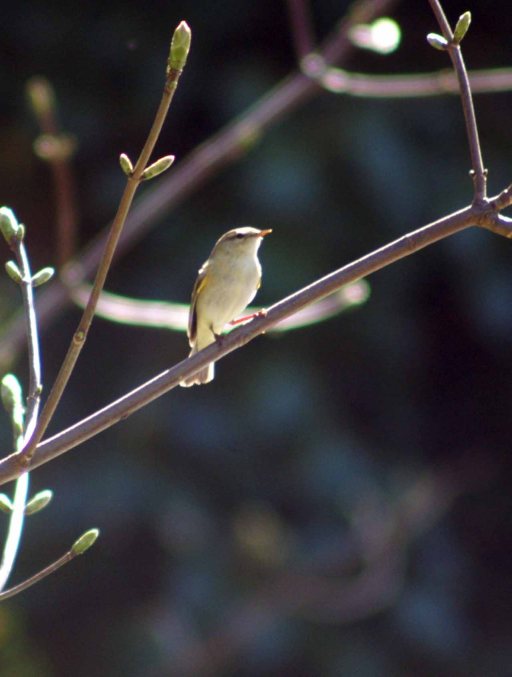 A sunlit Willow Warbler. This bird’s front is much paler and ‘cleaner’ and it has pink legs. 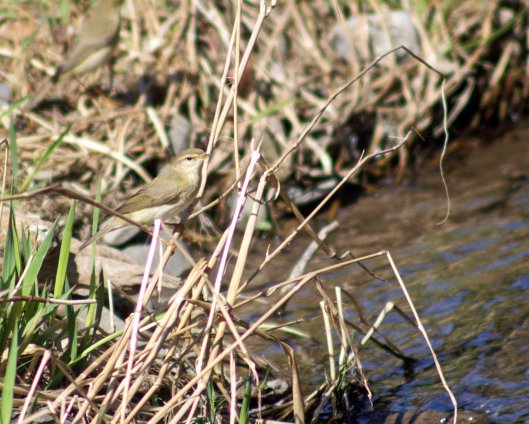 This stretch of the river was lit by the sunshine and benefits from having trees closer to its edge as well as plenty of other perching points for the fly-catching warblers. I’m not sure if it was the better light here or just something about the general appearance of the birds, but I was more or less certain straight away that these were not chiffchaffs, so willow warblers then. These two species can be easily confused when based on appearance only, in fact the one diagnostic I remember is to look at the legs, the willow warbler’s are usually, but not always flesh-coloured, while the chiffchaff’s are darker.If only one of them had stopped to sing it would have made things easier, but no. I know mixed flocks of birds do migrate together, but do these two species join up and travel together? 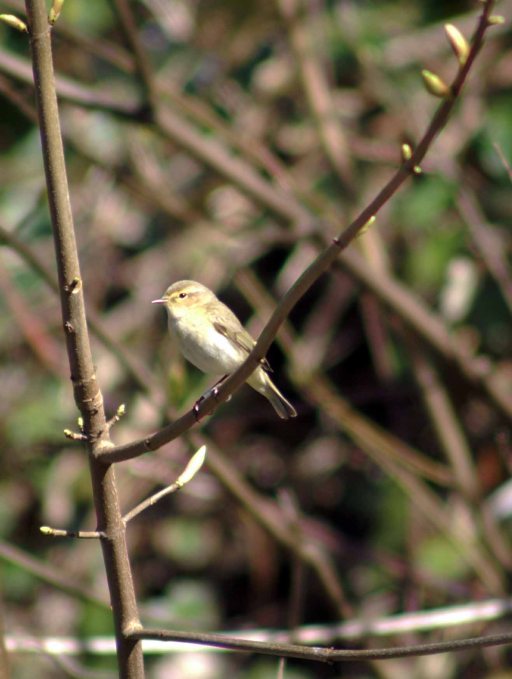 The commonest warbler over much of northern Europe. Underparts are tinged yellow, especially in juveniles. Legs may be dark brown to flesh-coloured. Supercillium is fairly prominent and longer and there is a bright lower eye crescent. Wing feathers are longer than those of chiffchaff. 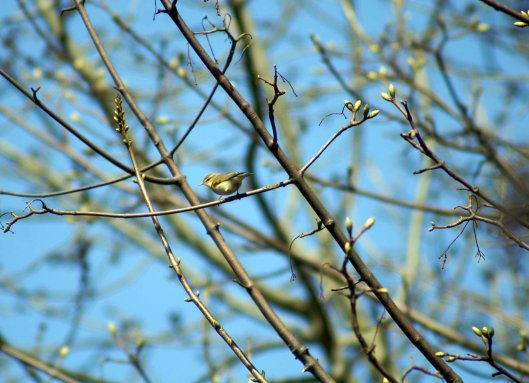 I deliberately haven’s zoomed in on this bird to give more of a sense of scale; these birds are tiny

I posted a blog about Chiffchaffs around this time last year, which contains a lot more information, see it at  https://theresagreen.wordpress.com/2012/04/26/bird-study-a-chiffchaffs-year/ or just click on April 2012 in the ‘older posts’ to find it from here.