After a few months of being relatively quiet and peaceful, our Herring gull neighbours are back and making their presence heard and seen throughout the village. Pairs stake out their territories early in the year and will defend them vigorously and vociferously from now until nesting begins, continuing to do so until this year’s offspring have grown and are mature enough to leave the site. It all looks and sounds like a lot of effort and hard work, but that is the price this pair are prepared to pay for a prime high-rise site. 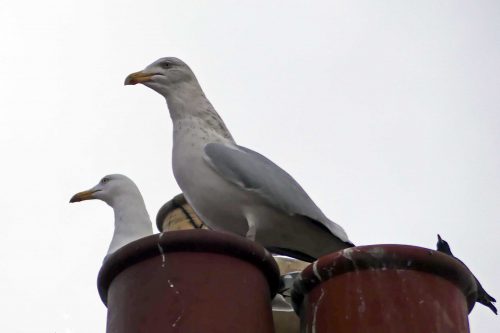 These particular chimney pots are atop my daughter’s 3 storey house, offering well-elevated accommodation and boasting unrivalled 360° views extending over rooftops and the surrounding landscape, which includes the sea. It is a mere two-minute, maybe less, flight to the seashore. Both the male and female of the pair take responsibility for defending the site, sometimes together and sometimes on their own. They must need to take frequent breaks to restore their energy levels after a bout of meaningful squawking at the sky.

leaving the male in charge. I didn’t notice while I was taking these photographs, but he was not left entirely alone. To my amusement, a male Starling had his back. He has located his family home in the eaves of the adjoining property.

He seemed to have his work cut out, although from where I was standing in the garden I couldn’t see what or who he was directing his attention towards. 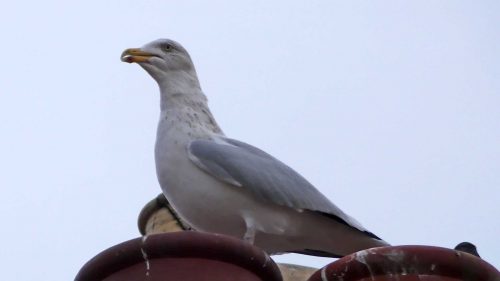 I couldn’t quite catch him in full squawk this morning, but he was making plenty of noise. He is still sporting his winter plumage and appears to be in pretty good shape, but he’s not a young bird. When I looked at my images I recognised him by his eyes, or rather by the lack of feathers around his eyes as the male of a pair I spent a lot of time watching back in the spring and summer of 2012. 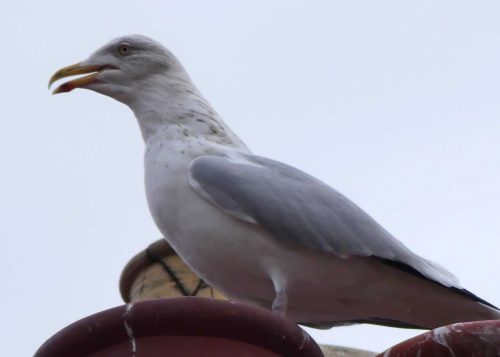 As you can tell from the next couple of images he is looking a bit scrawny around the neck area, not as plump and well-filled out as he was back in the day.

Herring gulls breed for the first time at age 4 and a typical lifespan is 12 years. The oldest recorded Herring gull (from ringing records) was  32 years 9 months and 25 days old. This record was set in 2013. 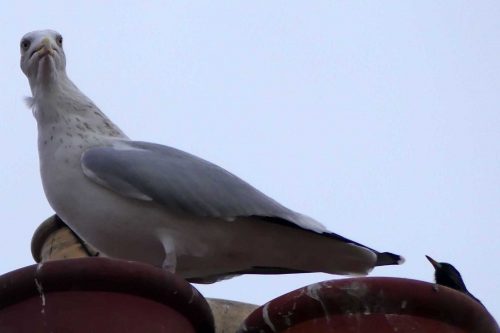 10.39am – the female arrives back with a flourish and lends her voice to the warning-off aria.

he may be older, but clearly still has got what it takes to attract a mate and this one appears younger. It must be something to do with the status of his domain.

10.40 – She’s a bit on edge though and leaves again a minute later, I think she was chasing off another gull from their airspace, perhaps a rival female. It started to rain quite heavily then and he left shortly afterwards too. 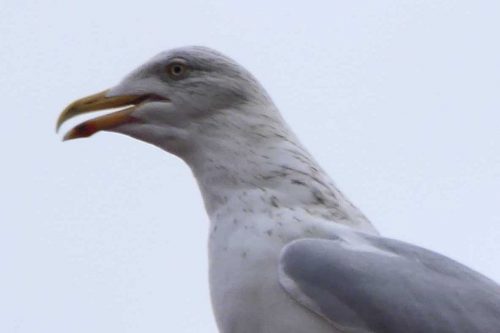 and below is one I took on July 24th 2012. He’s in his brighter summer/breeding plumage here, but had the ‘scabby’ eyes even then. It’s too much of a coincidence for it not to be the same bird isn’t it? He was considerably better-padded then too. If 2012 was his first year of breeding he would have been 4 plus the 5 years from then till now would make him 9, but I think he could be older. 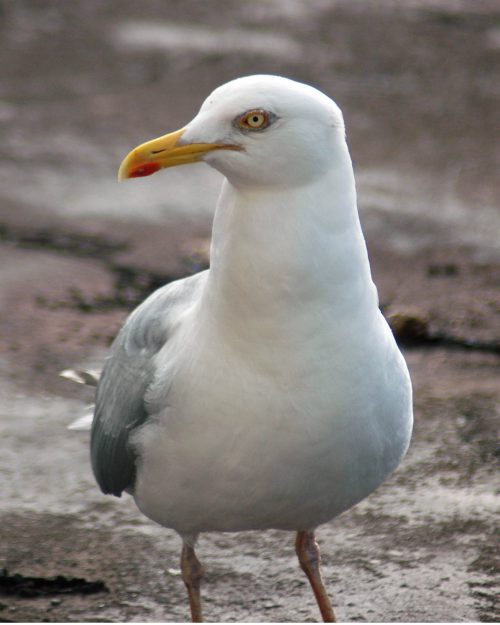 This was him and his mate in full squawk back then, after they had successfully reared a chick that had fallen out of the chimneypot nest and landed on the flat roof below. More about that here:   https://theresagreen.me/2013/06/20/theres-a-new-gull-on-the-roof 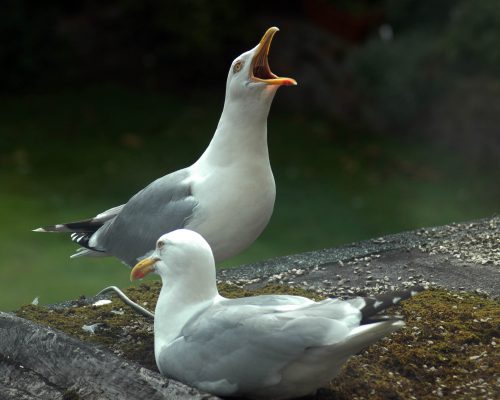 He was and I’m sure, still is a brilliant and attentive parent, bringing regular and diverse meals back to his hungry youngster. Including a starfish and regurgitated chips.

Back to the present. I was out taking my baby granddaughter for a walk along the prom and spotted this chap paddling for worms on the grass embankment. Old scabby eyes himself.

The Herring gull remains on the RED list of European threatened birds and it is illegal to harm them or damage or remove their eggs from nests.

13.34- A sunny day with a strong breeze made it feel cold, but I was in need of some quick-fix fresh air and for that, Rhos Point is the perfect spot. It’s also one of my favourite spots for watching wading birds, although I don’t visit it much during the breeding season as it is almost deserted by birds and becomes uncannily quiet. Today I arrived as the tide was coming in and I spotted a small group of Oystercatchers waiting patiently for today’s incoming lunch, so I waited too to see if they would be joined by others.

As I made my way down nearer to the shore I heard some lively chirruping emanating from a shrub that has taken hold on the promenade edge, then a few House Sparrows flew out and headed for the shore below to forage amongst the exposed rocks.

Two elegant Sandwich Terns flew low over the sea, close to its edge.

13.37 pm – Oystercatchers on the sea edge use the waiting time to rest or preen. 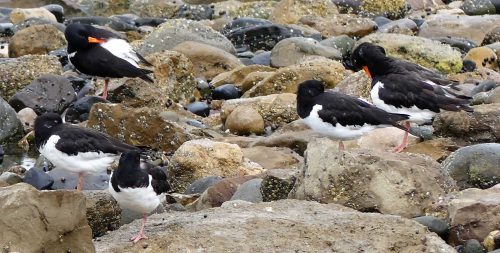 Oystercatchers are high on the list of my most favourite birds, they have great character and charisma and the more I learn more about them the more fascinating they become. They are large wading birds and when not resting are noisy. They sport large long orange or red bills, which they use for smashing or prying open molluscs.

The diet of coastal oystercatchers is varied, although dependent upon coast type; on this rocky shore with its extensive mussel beds, they will prey upon mussels of course, and also on limpets and gastropods. They also take advantage of whatever the tides bring in such as small fish and crabs.

The bill shape varies according to the diet. ‘Stabbers’ feed by jabbing their laterally compressed bill tips in between the valves of a mussel’s shell, while ‘hammerers’ crack open mussel shells by pounding on them. Those birds with blade-like bill tips pry open or smash mollusc shells, and those with pointed bill tips tend to probe for worms.

13.40 – The Oystercatchers were joined by a beautiful Sandwich Tern.

The Sandwich tern is a summer breeding visitor, returning to north-west Wales & Anglesey from late March to September. In the UK, many of the important colonies survive because they are on nature reserves.

This is a very white tern, which in summer breeding plumage had a full black cap on its head. The bill is long and black with a diagnostic yellow tip. The legs are short and black and the tail short and forked. In flight it shows grey wedges on its wings tips.

13.44- A small number of Curlews flew in to land on the rocky sea edge, where their cryptic plumage allows them to all but disappear.

I took this short video as the Curlews arrived – coudn’t avoid the wind noise!

13.47- The mysterious moment that suddenly galvanises waiting wading birds into action arrived and triggered most, though not all of the Oystercatchers to begin foraging in earnest. 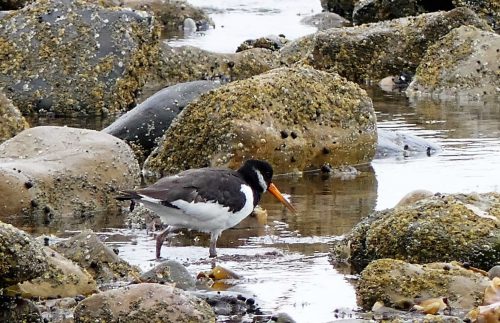 13.52- A second Sandwich Tern flew in, closely followed by a third.

The terns also settled down to preen. 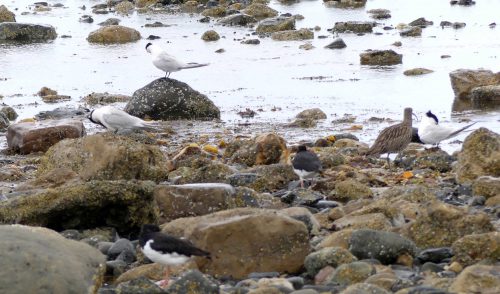 14.04- A Herring gull- it’s good to see them down here, where away from the rooftops, rubbish tips and promenades they are not upsetting anyone! 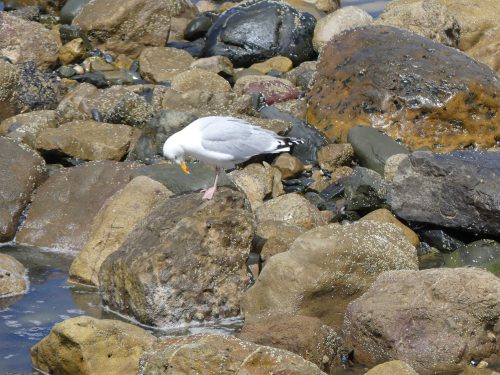