Although blessed with visitors from a good range of species, Blue tits are without doubt the mainstay of my window birdwatching and  have given me hours of viewing pleasure. There are few moments in the day when there are not at least one or two to see and at certain times there can be a good few more; counting them accurately is tricky, they’re too quick and mobile. I admit I hadn’t noticed any difference in the numbers of birds I’ve been seeing this year compared to previous years, so I was surprised to learn that according to BTO records, on a national scale there are significantly less of them this winter.

Throughout the UK Blue tits have always ranked amongst the most numerous of our garden feeder visitors, but last November (2016) BTO Garden BirdWatchers reported the lowest numbers of Blue Tits in gardens since 2003.  They say:

” The explanation for our missing birds can be found by looking back to the early summer. The wet weather across the breeding season, particularly in June, would have made it difficult for the adults to feed themselves and their chicks. Normally we would expect to see large numbers of newly fledged young come into gardens to seek food, but this year BTO Garden BirdWatch results show the lowest numbers of Blue Tits in August for eight years. This indicates that fewer young birds survived than usual this year and these findings are supported by the preliminary results from the BTO Nest Record Scheme (NRS) and Constant Effort Sites Scheme (CES) which found that Blue Tits had their worst breeding season on record, thought to be due to a lack of young birds this year.”

All the more reason to appreciate these endearing little birds and continue to help them out where we can.

Blue tits are small. acrobatic birds with a gregarious nature, they have short legs and a sturdy bill which suits their omnivorous diet of mostly insects and spiders in the summer and a wide range of fruit and berries in autumn and winter.

The wings and tail feathers are bright blue and the back is olive-green. The underparts are yellow with a greyish-black stripe running down the belly which is usually narrow, but can vary. The cap, or crown, is a stunning bright blue. The face is a clean bright white accented by a narrow black stripe that runs through the eyes, there is a black chinstrap and a small black ‘bib’ under the bill. Males and females are the same, but males show brighter blue than females. Like all birds, Blue Tits can see ultra-violet light: the bright blue feathers on the front of their heads glows brightly under UV light and it is the quality of this feature that is thought to be the deciding factor in the females’ choice of partner.

It may seem to us that only a dozen or so Blue Tits use our garden feeding stations in the winter, but the truth is there could easily be many times this number passing through during the course of a single day. Blue Tits are largely sedentary in their habits, but studies of the local movements of British and Irish Blue Tits have shown that birds range over an area and move around in small flocks, or feeding parties, that often include other tit species, Goldcrest, Nuthatch, Treecreeper and even the occasional wintering Chiffchaff.

A Stranger Passing through

As one Blue tit looks pretty much like another, it’s almost impossible to tell who is who, so spotting through-visitors is tricky. But earlier this week  I happened to spot an individual that looked ‘different’ to the ones I usually see.

Looking at him through the camera lens I could see he had an unusual dark patch of feathers above his beak and between his eyes and also a band of darker feathers around the top of the breast, giving it a slightly dirty appearance. This is the first Blue tit I have seen with darkened plumage, but the condition, known as melanism is apparently not that uncommon, although more common in the related Great tit. He didn’t stay for long as he was chased away by other Blue Tits. He must have stood out to them as looking ‘different’. (The BTO keep records of birds reported with abnormal plumage shown here.)

For the past couple of weeks I have been entertained by their acrobatic prowess as the small overhanging tree-of-unknown-species in front of my window has buds that are beginning to swell. This is their tree of choice in which to wait their turn for the birdfeeders down at ground level, to which they return to eat their snatched prize. Now they often have quick forage around the twiggy branches seeking out any lurking insects or larvae that may be hiding in them.

Blue tits are brilliant acrobats and can hang upside down from branches to search underneath them for insects. This agility and their light weight also enables them to search to the very tips of twigs. 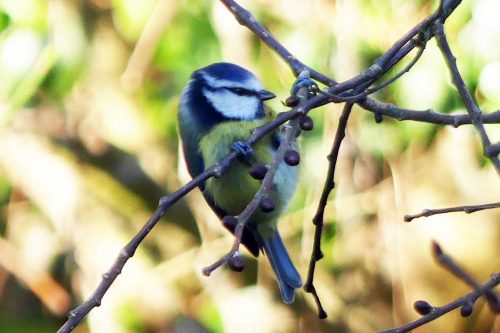 The males are singing too – I photographed my first singer of this year on January 23rd. 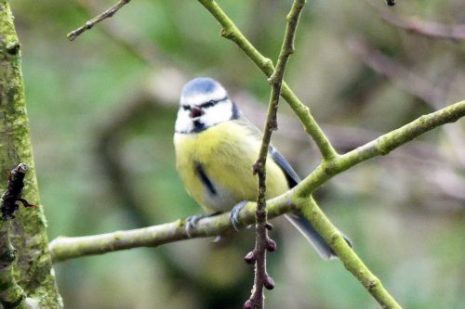 Blue tits and us

The Blue tit and other tit species were long known as the Titmice, a name taken from Middle English (Icelandic) ttr = small,  and mouse – in Old English mase=small bird. ‘Tit’ referred to any small object or creature and is of pre-7th century Norse origin. The first known use of ‘titmouse’ has been dated back to the 14th century and ‘Tom titmouse’ to around the 17th century. ‘Titmouse’ was used for this genus by most old authors, but Yarrell in his first edition shortened the name to ‘Tit’ and his example has been followed by many later authors.

Blue tits excel at problem-solving. Faced with intelligence test apparatus contrived by researchers, modern-day Blue tits have learnt to pull out a series of pegs or open matchbox ‘drawers’ to get at food. They have adapted readily to man and have been seizing opportunities to benefit from our lifestyles and habits for hundreds of years; sometimes this has worked out well for them but sometimes their opportunism has put them in harm’s way.

In the seminal account of English nature, The Natural History of Selbourne, which was  first published in 1788, Gilbert White records his observations on the tactics local birds used to survive (or in some cases not) during harsh winters:-

“The blue titmouse, or nun, is a great frequenter of houses, and a general devourer. Beside insects, it is very fond of flesh; for it frequently picks bones on dung hills. It is a vast admirer of suet, and haunts butcher’s shops. When a boy, I have known twenty in a morning caught with snap mousetraps, baited with tallow or suet. It will also pick holes in apples left on the ground, and be well entertained with the seeds on the head of a sunflower. The blue, marsh and great titmice will, in very severe weather, carry away barley and oat straws from the sides of ricks.” 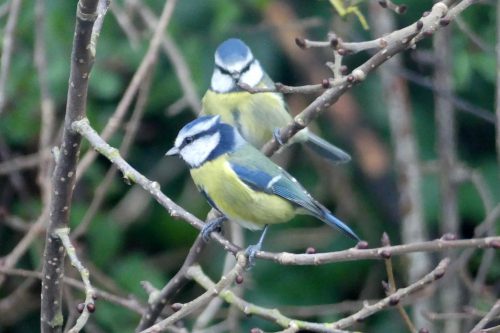 It’s hard to imagine that Blue tits have not always been regarded with fondness and affection by everyone and were actually once thought of as ‘foes’ by many gardeners with fruit orchards. The following is an extract from one of my favourite old nature books, which according to the inscription in the front was given as a birthday gift in 1923. The chapter is entitled ” Attracting Wild Birds to Gardens” and written by Oliver G.Pike FZS, FRPS who was clearly already spotting the signs that our wildlife was in need of our support.

“I have watched the Blue Tit  and its mate busy on one of my apple trees in the month of April; they were carefully searching the branches for buds which contained insects, and these were quickly destroyed – that is, both bud and insect. They seemed to be doing a lot of harm, but I allowed them to continue, and later on in the year that same tree had a fine crop of excellent apples. So many gardeners see a bird destroying buds and immediately jump to the conclusion that it is a pest and ought to be destroyed. I knew one gardener who in the course of one season trapped and destroyed over fifty Blue Tits. He quite overlooked the fact that by doing this he was allowing for the increase of 100s of 1,000s of insects which would do far more harm to the crops. One pair of Blue Tits which succeed in bringing up their family of, say ten young, will during the period of feeding them account for not less than 10,000 insects, the majority of which are very injurious to many garden crops and flowers, and every one of these will be captured within 100 yards of the nest.” 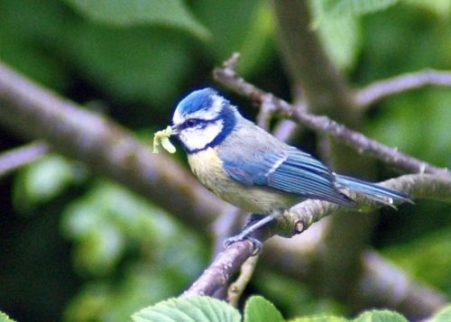 The successful breeding of chicks is dependent on sufficient supply of green caterpillars as well as satisfactory weather. Breeding seasons may be affected badly if the weather is cold and wet between May and July, particularly if this coincides with the emergence of the caterpillars on which the nestlings are fed.

But Blue tits are perhaps most well known, amongst our older generations at least, for raiding milk bottles. It was first noticed in Southampton in the late 1920s that the local Blue tits had somehow learnt to remove the caps of milk bottles that had been delivered by the milkman each morning. The birds pierced and tore the lid, sometimes removing it completely, then helped themselves to the rich cream that had floated to the top.

Even though blue tits rarely travel farther than a few kilometres from where they’re born, they learned this behaviour from each other by watching their neighbours. Thus, by 1935, the Blue tits living in London were regularly stealing cream, too. The behaviour soon radiated outwards and became familiar nationwide to anyone that had milk delivered to their doorsteps. I’m sure if the delivery service was still available, the cheeky little birds would be helping themselves to this day, they certainly were still taking mine back in the late 1990s/early 2000s. It had to be milk with cream that rose to the top of the bottle though; they can’t digest milk, so the skimmed stuff is no good!