I first saw the delightfully strange little Green Longhorn moths on Bryn Euryn on the 13th May last year, where a fairly large number of them were dancing around an oak tree in the sunshine. Initially I thought they may be St Mark’s flies, but as I got closer I could see these insects were much tinier, had ridiculously long white antennae and wings that had a metallic greeny-bronze sheen to them.  It took me a while after that to discover their identity, but finally learnt that they were Long-horn moths, also known as Fairy Long-horn moths and this particular species was the Green Long-horn moth, Adela reaumurella.

Finding them in the exact same location yesterday (May 9th), was a surprise and a treat, more so as this time they were mixed in with a largish number of St Mark’s flies and were behaving differently. No group dancing today, the combined species, all male, were travelling along rather erratically in a wide ribbon, staying within the cover of the oak leaves and making frequent individual brief stops on leaves. They were maintaining a consistent height above the ground at about my head height (I’m 5′ 3″), and progressing along the band of trees and shrubs that border one side of the meadow. I’d love to know what was happening.

Wingspan: 14-18mm; both sexes have rough black hair on their heads and thorax, giving them a furry appearance when seen close-up. Upperwings are a metallic green-bronze and underwings are metallic bronze. Males have extremely long, whitish antennae; the females’ antennae are shorter.

Open areas such as heathland, moorland, country gardens, parks and wherever the larval foodplant is found.

The moths fly in the daytime during May and June, sometimes occurring in swarms and often around the tops of trees and bushes.

The larvae feed on leaf litter of Oak and Birch and make themselves portable cases with leaf fragments. The larvae have no prolegs and pupate in their larval cases. 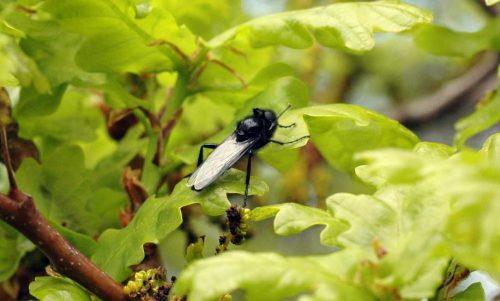 The St. Mark’s Fly is a species of true fly, also known as Hawthorn flies and belongs to the family Bibionidae. 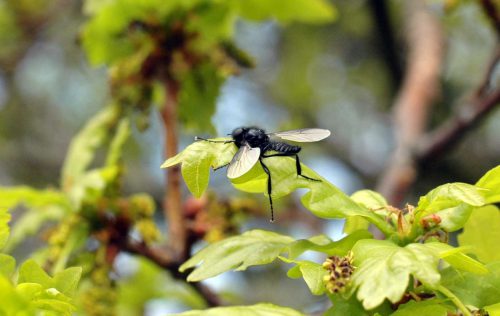 This jet-black fly is so-named as it frequently appears on or around the feast day of St Mark, which falls on April 25th and is seen in flight in May.  They are found around woodland edges, hedges, rough grassland and wetlands and can be seen throughout the UK in spring. The males are  often encountered in a swarm drifting slowly up and down at about a person’s head height, long legs dangling, trying to attract females. The swarms can be annoying, especially if you have to walk through one, and the insects are not averse to landing on people. However, they are harmless and as insects that feed on nectar, they are important pollinators, particularly of fruit trees and crops.

Length: The male is about 12 mm and the female 14 mm long. Although appearing black and shiny, this is quite a hairy black insect. Wings: The wings have a black front edge. The compound eyes are large and bulbous and they have a rather tubular segmented body and black legs. The front legs have a stout spine at the tip of the tibia.

The females are larger,  have smoky wings and much a smaller head and eyes. 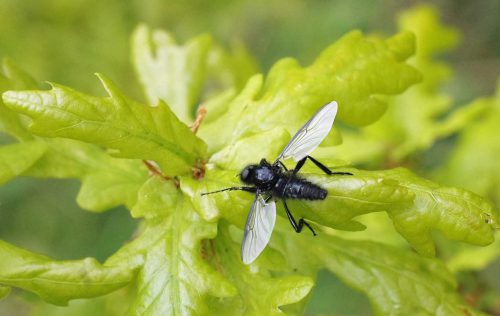 The St. Mark’s Fly has a very short adult life cycle, being in flight for approximately only one week. The majority of their time is spent as larva in the soil. During autumn and winter, larvae feed on rotting vegetation which they chew with their strong mouthparts. In springtime the males emerge first and the females a few days later. After mating, females lay their eggs in the soil and die soon afterwards.