Rhos Point from the Little Orme

Rhos-on-Sea is a popular seaside venue that is busy with people visiting most of the year round, particularly at weekends and when the sun shines, but they don’t come here for its beach. The seashore, wrapped around the flat fortified headland of Rhos Point, is not the most beautiful in North Wales: a general first impression may well be of an expanse of flat shoreline littered with variously sized brown-coloured rocks and boulders. No easy strolling or picnicking here. 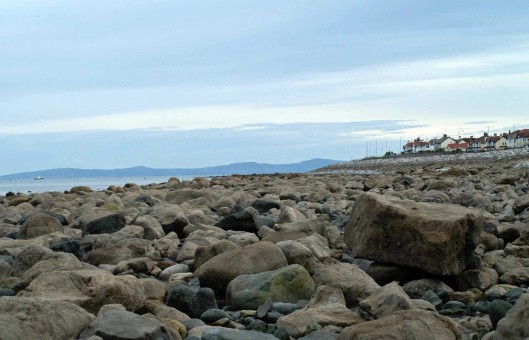 The rocky shore of Rhos Point from Penrhyn Bay

However, between the rocky shore and the sea lies an expanse of long-established Mussel beds which is highly attractive to visitors – of the avian variety. Large numbers of a variety of species of sea and shore birds will be returning here this month from their summer breeding grounds to spend the autumn and winter to feast on the gourmet seafood on offer here.

Rhos Point across the rock strewn shore to the mussel beds

There may be a few early arrivals, maybe a Turnstone or two, but for now, approaching mid-August, the resident breeding birds, the Herring gulls, a smallish number of Lesser Black-backed gulls, Cormorants, plus a few Oystercatchers have the place more or less to themselves.

Soon they will be joined by large numbers of Curlews, Redshanks, more Oystercatchers, Turnstones, Dunlins, Ringed Plovers and Sandwich Terns. If we are lucky there may be a few Purple Sandpipers in the mix, and there will doubtless be a few temporary visitors stopping to feed before escaping to warmer climes. There will be Rock Pipits and Pied Wagtails amongst the huge rocks of the sea defences. So much to look  forward to!

Without the movement and cries of the absent birds the landscape appears harsh, a sombrely coloured, barren place devoid of life. But look more closely and you’ll see it is in fact a living landscape, richly populated by hosts of small sea creatures, which is of course why the birds head here for the winter.

On close inspection, the rocks that appear a uniform brown colour from a distance are actually encrusted with colonies of barnacles, millions of them.

Barnacles cover the surfaces of rocks 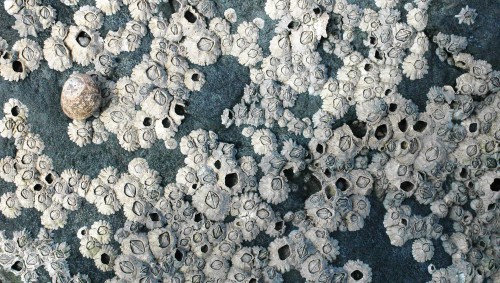 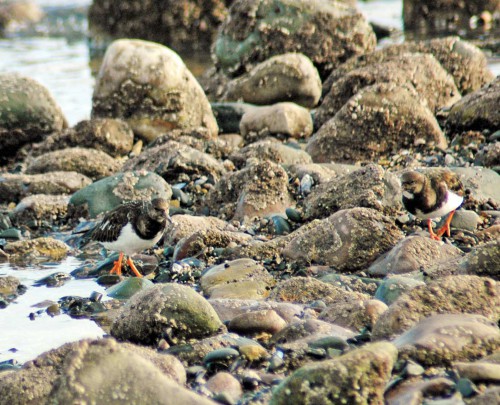 Turnstones will be perfectly camouflaged amongst the barnacle-covered rocks

Winkles, or periwinkles are numerous too. 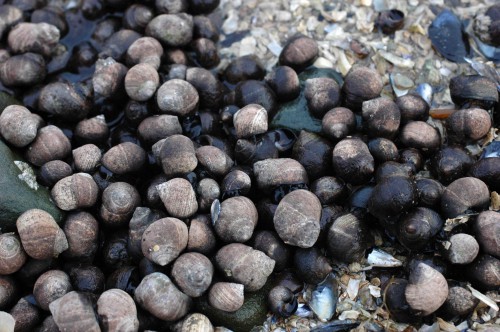 At low tide, cross the rocks, skirting the pools of shallow water left behind 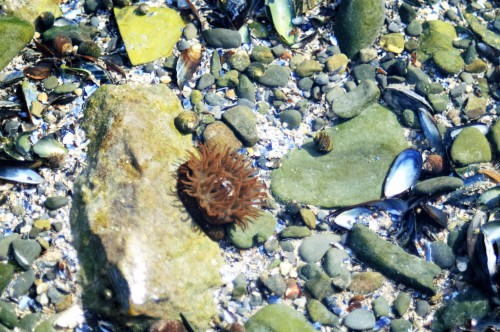 A flower of the sea -Beadlet anemone – Actinia equina

and soon the crunch of shells accompanies every footstep, as you are literally walking across the surface of a dense mass of living Mussels. It’s a very strange feeling. 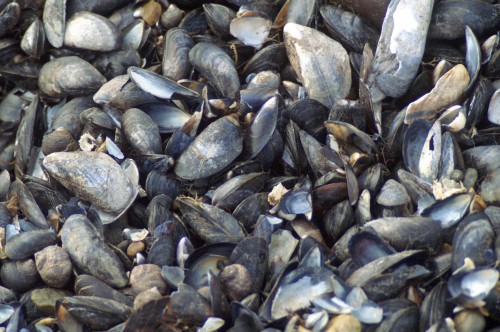 You realise now why you see mussel shells everywhere. 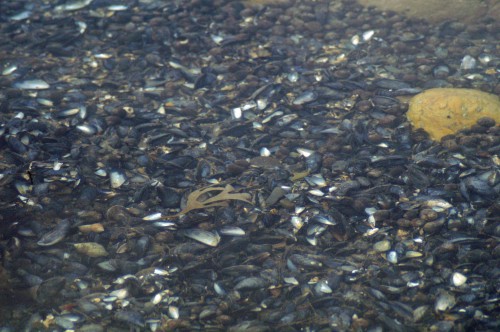 Mussel shells on the tide line of Rhos Harbour beach

All is ready for the avian invasion.

Beauty is where you find it and often in the least likely of places, but in nature it may also be fleeting, so needs to be appreciated when the opportunity presents itself. Here are a few images of some things I found beautiful along the way of a short walk I made from home into Rhos-on-Sea village on a windy, sunny-ish morning last week. Some would most definitely not be there if I were to look for them again.

I had set off to see if there was anything interesting to see down on the seashore and walked along the promenade to reach a point from which to access it. The promenade is on a lower level to the road and pavement for a short stretch here and the intervening space between the two is a steep slope covered with grass. This grassy embankment is mowed every now and then, but the times between cuts are often long enough to allow opportunistic weed wildflowers to pop up and bloom and in different seasons I have spotted a good variety of species here.

Reaching the top of the path leading down to the prom I heard first, then saw a man on a sit-on mower working on the flatter grass verge going in the opposite direction towards Penrhyn Bay. This prompted me to get a move on and have a look to see what might be flowering lower down as it clearly would not be there for much longer.

First to catch my eye was a tangle of white-flowered bindweed. Generally similar to the large flowered bindweed that abounds in waste places and on road verges, as well as being the bane of many a gardener’s life, this was the smaller-flowered Hedge Bindweed. 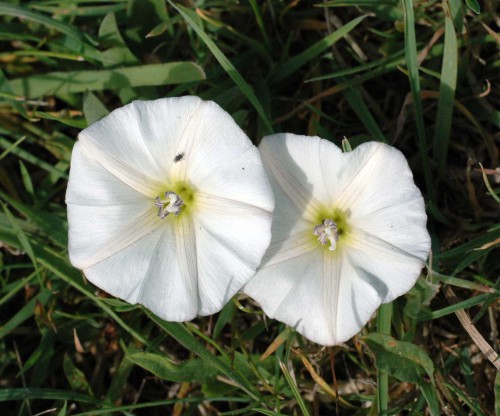 Flowers are smaller than those of Large Bindweed

Lower down in the grass there was Creeping Cinquefoil, some of the golden yellow flowers fading around the edges. 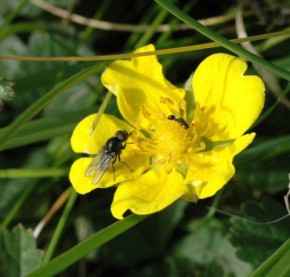 There were insects nectaring on most of the available flowers, including bumblebees, hoverflies and various other flies.

I hope they all escaped the blades of the mower that was about two minutes behind me as I took these photographs. I’m glad I got there when I did, otherwise I would not have seen the flowers at all.

The tide was turning and beginning its journey back into the shore and although I could see and hear a lot of birds out on the tide-line, including curlew, redshank & oystercatcher, they were way too far away to see properly.

View across the mussel bed from the shore. (click for a bigger image)

With or without the added interest of birds though, I can meander contentedly  along this rocky seashore at any time, finding the rocks themselves endlessly fascinating. 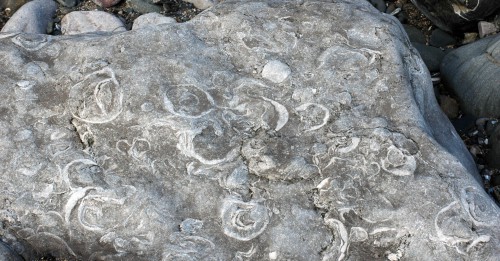 We don’t get much variety in the seashells on the shore here, although not surprisingly there are an awful lot of mussel shells. 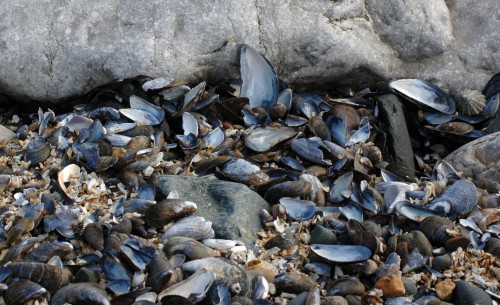 Seashell collection amongst the rocks

Textures and patterns in rock with seaweed and periwinkles 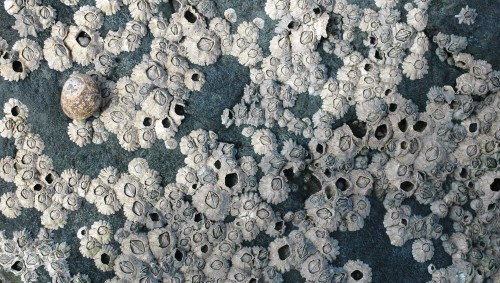 I spent a few minutes watching a cluster of Kelp Flies, appropriately on a length of brown, leathery Kelp seaweed.These are the insects that fly up if you walk through or even past clumps of dryish seaweed. They are quite tiny, so I thought it might be interesting to have a closer look at one. Not beautiful maybe, unless you are another Kelp Fly, but the wings are nice and they have dainty white feet. 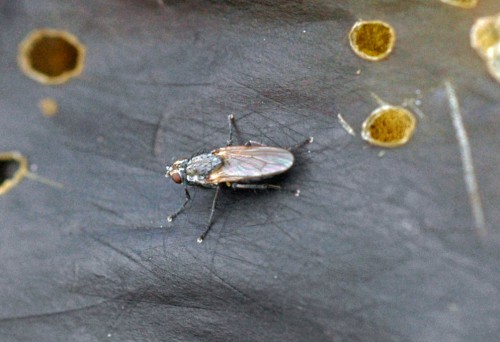 So I travelled slowly along and eventually arrived at the sandy beach area next to the small harbour area of the village. The beach is protected by a barrage of more large rocks that has to be surmounted  to reach it and as I clambered over them I spotted a colourful splash of flowering plants growing at the back of the building that is now a fishing-tackle shop and kayaking centre. This is not a particularly attractive spot and any wind-blown rubbish from the beach tends to get caught up here, but I have come across some interesting plants here, so is always worth a closer look at.

What had caught my eye today was a large clump of Common Mallow that had found shelter in a corner tight against a wall and was clearly thriving there. 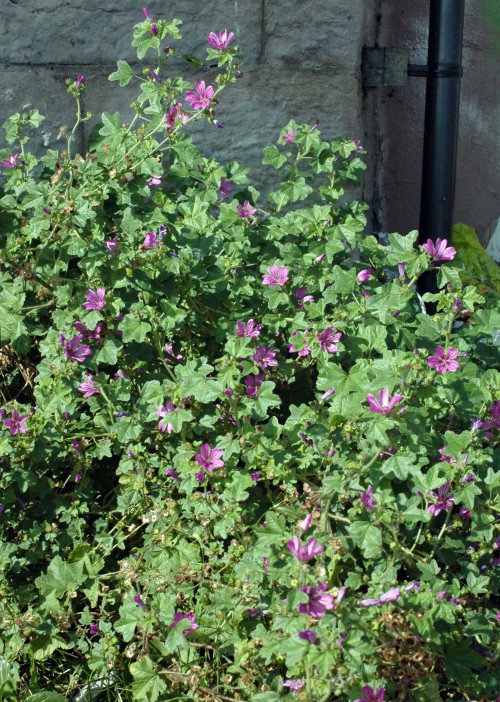 A large Common Mallow plant thrives in a sheltered corner

Another common plant in waste places, especially on sandy soils is Annual Wall-Rocket and there are usually a few of these plants growing around this location. 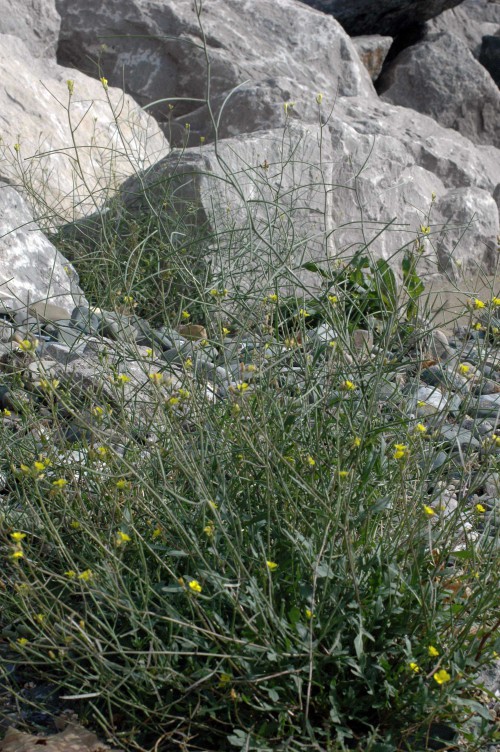 A large specimen of Annual Wall-Rocket

There was a large plant of Fat-hen too, and another one right on the edge of the sand just a short way from the sea.

Amongst the commoner plants I was pleased to  find this Ray’s Knotgrass, an annual plant that is most often found on undisturbed coastal sand and shingle beaches. 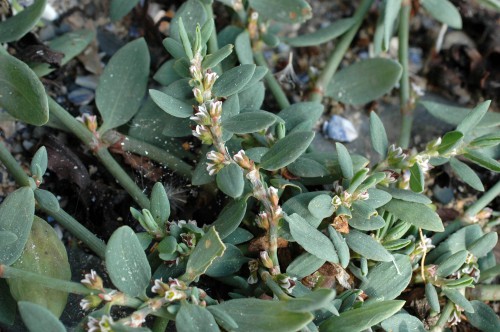 There was Sea Plantain, whose flowers are almost over now.

Then the prettiest of them all, the lovely Sea Mayweed. 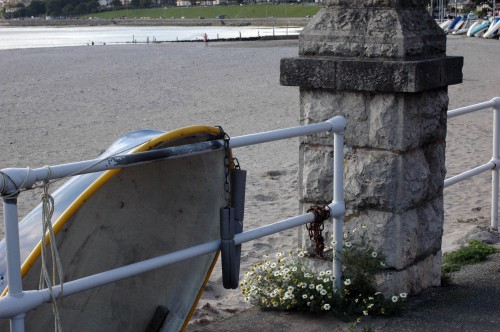 A clump of Sea Mayweed at the beach edge