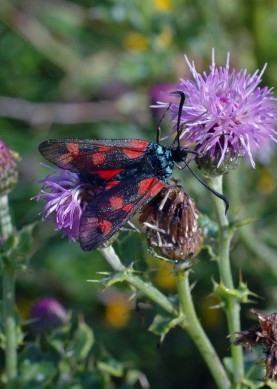 The only British burnet moth with six red spots on each forewing, although care must be taken with identification, as in some cases the outermost spots can be fused. Rarely the red colour is replaced by yellow.

Flies with a usually slow buzzing flight during sunshine and is attracted to a range of flowers including thistles, knapweeds and scabious.

Sightings locally: Numerous on Little Orme during July & into August; also seen on Bryn Euryn but less frequently and not in any great numbers 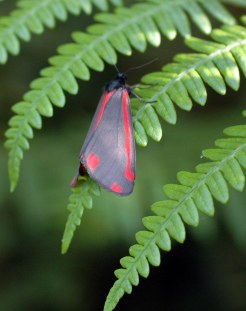 A medium-sized black moth with red markings on the forewing and hindwings that are mostly red. Often found near common ragwort, although sometimes on other ragworts and groundsels.

This species is so named for the red colour of the hindwings.  There is little variation between individuals, although on rare occasions the pinkish markings are replaced with yellow, or the forewing may be red with a black border or rarely the wings are completely black. Easily disturbed by day and flies in sunshine. Also flies after dark.

The distinctive larva of the Cinnabar Moth

This is the adult moth into which the distinctive yellow and black striped caterpillars, found feeding mainly on ragwort, will eventually transform.

Common and well distributed throughout most of England, Wales and Ireland, the Isle of Man and the Channel Islands.  More confined to predominantly coastal habitats in northern England and Scotland.

Sightings:  Little Orme where the larvae are very numerous but adult moth is elusive! I’ve only seen one so far and that’s it in the photograph. Great Orme

When freshly emerged the green colour of the forewing, combined with the wing markings, help to distinguish this moth from most others. This green colour fades to yellowish, whitish or even pinkish white with age.

The moth is easily disturbed by day and is often seen flying from just before dusk; it also flies into the night.

Sometimes common where it occurs, it may be found in a wide range of habitats, including gardens, open woodland and chalk downland.

Distribution: Widely distributed over England, Wales, Scotland, including the Hebrides and Orkney, and Ireland.  Also found on the Isle of Man and the Channel Islands.

The forewings of this attractive little moth are chestnut-brown, often heavily dusted with black. The pale antler-like mark, from which the common name arises, is always present, although the dark wedges in the wings in the outer part of the wing may be much redused or even absent. The larvae feed on various grasses , sometimes causing severe damage to upland pastures.

The Silver Y flies by both day and night almost everywhere, mainly in the summer months, although immigrants from other countries may arrive at any time of the year.

Description: The ground colour of this moth is silvery-grey, often with a purplish sheen and brown marbling. The silver centrally-placed ‘Y’-shaped mark on the forewing is usually complete in this species, whereas in other related species it is normally split into two parts.

Silver Y on a peony seedhead

Behaviour: You may disturb a Silver Y whilst walking through long grass or when working in the garden, causing it to fly out. If you want to see it again you may have to watch carefully and watch where it lands as they are masters of camouflage, often targeting a drying grass or flower head  into which they ‘disappear’.