An early Easter and school holidays and the Great Orme Summit is fully open for business, including our NWWT shop, so all volunteers called back to action. I’m sticking with my Wednesday shift and was really looking forward to seeing what was happening in the wild world of the headland. I left deliberately early so I could take my time driving up along the scenic Marine Drive route and make a few stops along the way. The afternoon was bright and sunny but chilled, as it frequently is by a cold wind that ruffled the surface of the sea. Despite that there are plenty of signs that Spring won’t be put off any longer.

Just a short way in to my drive I spotted five goats strung out along a narrow ledge high up on the cliff. Too high to see properly from the car I stopped and got out: they looked even higher up from where I stood. Their agility and balance is breathtaking; I couldn’t imagine how they were going to get down, or back up from there but I’m sure they did.

The leader looks  like a Nanny that has given birth fairly recently and the one behind is small, so maybe this was a lesson in advanced foraging. 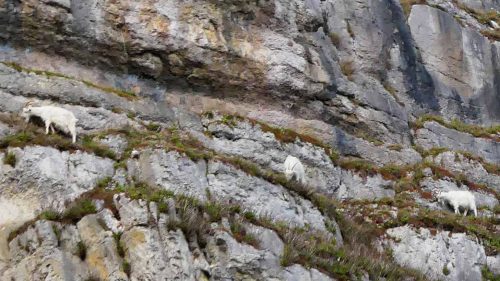 Watching the goats I heard the unmistakable calls of Fulmars and followed the sounds to where there were several sitting on the ledges where they will nest. The massive bulk of the cliff emphasised how small and fragile the birds are. If they didn’t draw attention to themselves with their loud cries you’d be hard pressed to spot them.

One or two were flying back and forth from the ledges. They are distinctive in flight, holding their wings outstretched stiffly.

Fulmars weren’t the only noisy birds in the vicinity – from the other side of the sea wall I heard the calls of Oystercatchers. The tide was beginning to go out and had exposed a strip of the rocky shore far below but it wasn’t until a bird flew in to join those already there that I spotted them. They’re surprisingly well camouflaged despite those bright bills and legs. 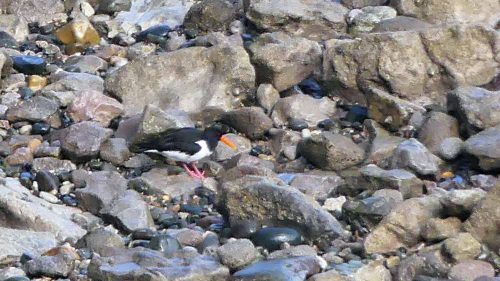 1243 – Driving on another gull caught my eye; a Herring gull. It’s good to see them in a more natural setting away from roofs and chimney pots.

This view shows clearly the line of the road ahead that continues around the point of the headland and back down to West Shore and Llandudno town. The road to the summit forks off to pass the buildings you can see in the middle of the photograph and St Tudno’s Church which is in the top left corner.

Passing the church I carried on, stopping at the pull-in parking area down below the cable car station, hoping to catch sight of a Stonechat or maybe a displaying Meadow Pipit amongst the gorse bushes. Two rabbits were out in the sunshine, one was grazing busily and the other, a much bigger one lay down to soak up the sun. I’m sure this wasn’t a true wild rabbit. It was big and white underneath, so may have been an escaped pet or at least was in some way related to one. 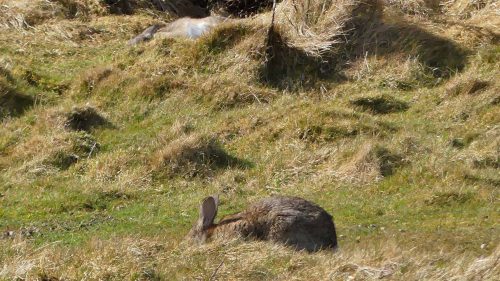 A man with two free-running dogs approached startling them and Big Bunny sat up quickly before they both shot for cover.

A pair of smart Magpies flew in and perched jauntily on a bramble bush behind where the rabbits had been. There are often one or two to be seen around the area of the church. 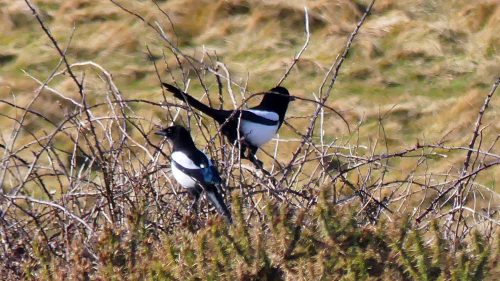 One of them left the bush to pick up stems of dried grass, so likely they have a nest nearby. 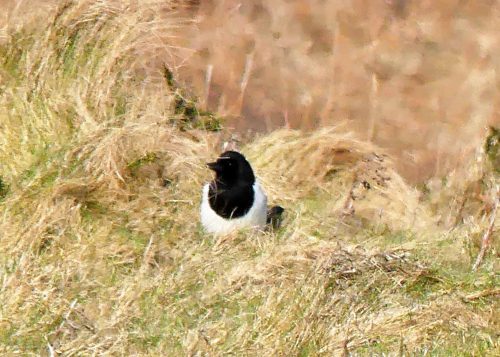 There were no smaller birds that I could see so I crossed the road to the cliff side where there is more Gorse to give them cover. I could hear birds singing but couldn’t see any, they were probably sensibly staying out of the wind. I did catch sight of a singing Dunnock, but he too stayed on the leeward side of an Elder tree, well concealed behind its dense twigs. Nice to see signs of new leaves on the tree.

The grass here is thick and dense and forms hummocks that catch the light. Walking on it feels very strange, it’s soft and spongy and bouncy underfoot. I like the way the sunlight catches it.

Sheep must find it comfortable to lie on. I came upon these ladies-in-waiting lying in a sheltered spot. They all had large blue patches painted on their backs and looked as though their lambs’ arrival may be imminent. They may have been marked this way as their lambs will arrive around the same time and the farmer can easily pick them out and be prepared.

One of my favourite Spring sights is of golden gorse against a background of blue sea. Today was perfect for such a sight with the sea perfectly reflecting the colour of the sky. 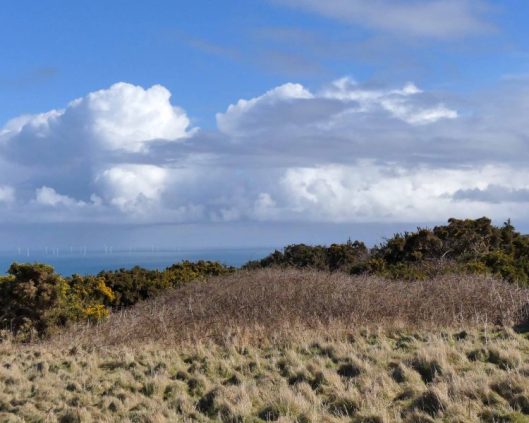 The Gorse as always smelled wonderful. I liked the way the rounded hilltop and the cloud echoed the shape of this blossom covered bush.

Returning to my car a Herring gull had taken up position on the sign board – this is a regular perching place where they wait in hope of scraps of food being left for them.

No signs of the Stonechats or Meadow Pipits I was hoping to see. It was good to see the Trams back in action at the Half-way Station. No 7 is waiting to pick up passengers that will de-board No 6 that will bring them from the Summit Station to here, then will take them down to the bottom.

Almost at the top I couldn’t resist another stop to watch Jackdaws that were strutting around near the edge of the road, busily collecting dry grass.

This one seemed intent on making as few trips as possible back and forth to the nest, cramming in an impressive amount before flying off. 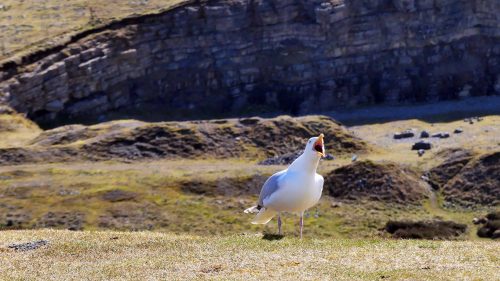 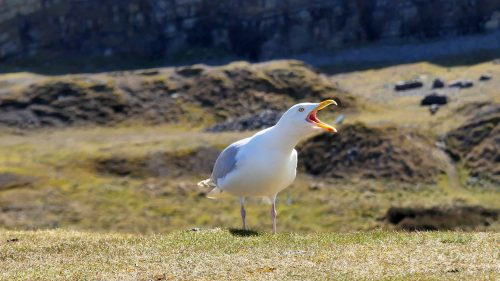 It was calling to its mate who duly landed close by its side, squawking in response.

Don’t they make a handsome couple?

The view across the bay and the Conwy Estuary was stunning as always with more dramatic clouds casting shade to make patterns on the surface of the sea. 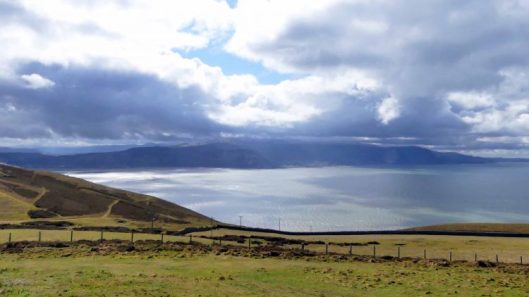 A quick look down from the other side of the car park over the farmland dotted with sheep…..

I zoomed in to see if there were any lambs yet. None to see, but I did spy the Magpies again.

It was really cold and windy up here. Anticipated trade in our best-selling woolly hats and gloves!